The Bridges of Madison County

When we in Iowa seeing the covered bridges of Madison County I only was able to post this single goofy picture at the time. 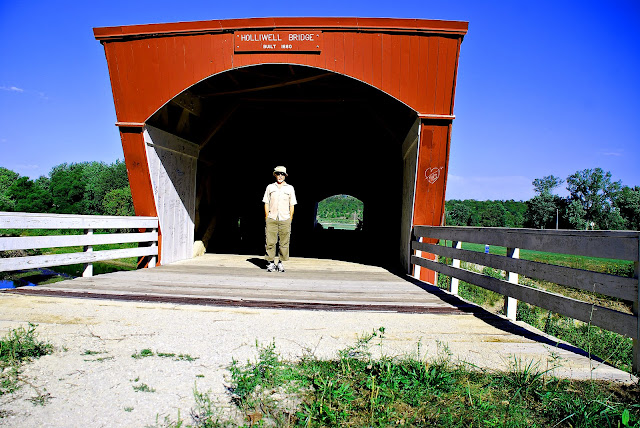 Holliwell Bridge is the longest of the remaining bridges in Madison County at 122 feet (31.2 meters) 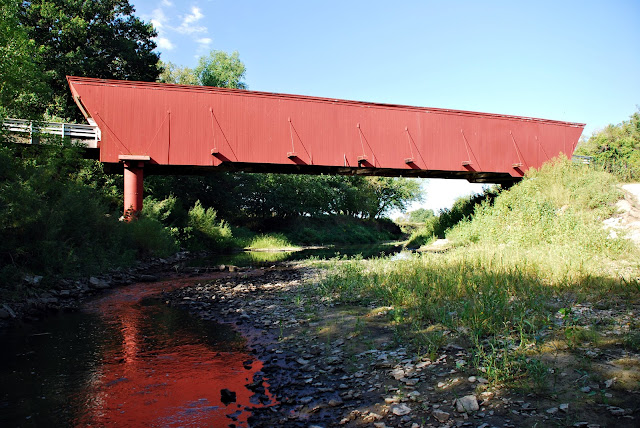 This bridge has always been at this location although the angle is somewhat different as the original supporting abutments were washed away by a flood and the bridge was repositioned.  This is one of the bridges used in the movie. 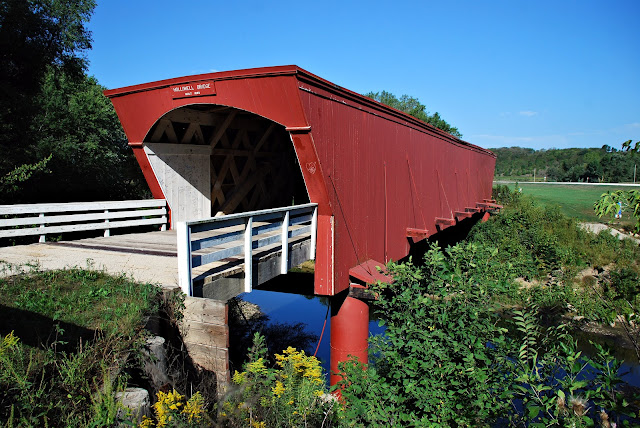 Cedar Bridge was shown in the movie and used for the cover of the book by author Robert Waller and is the only bridge remaining open to auto traffic. 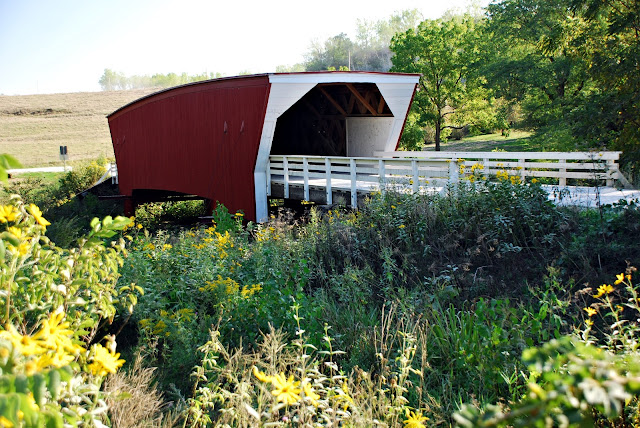 The bridge was burned down in 2002 by an arsonist who was never apprehended.  This is a rebuilt replica based on the original plans and building methods of that time.  Other bridges have been vandalised and since then all have had surveillance cameras installed. 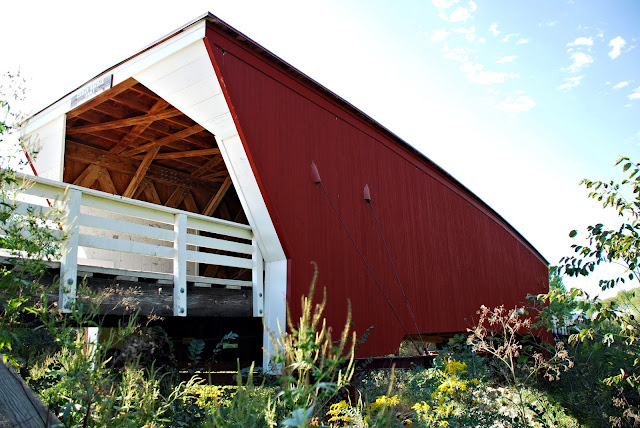 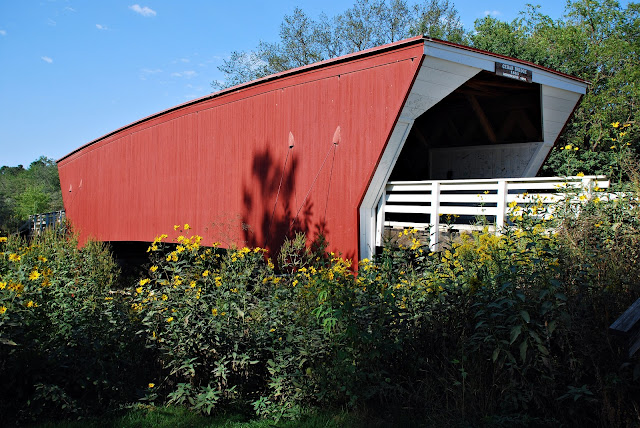 Imes bridge is different in that it features a pitched roof. 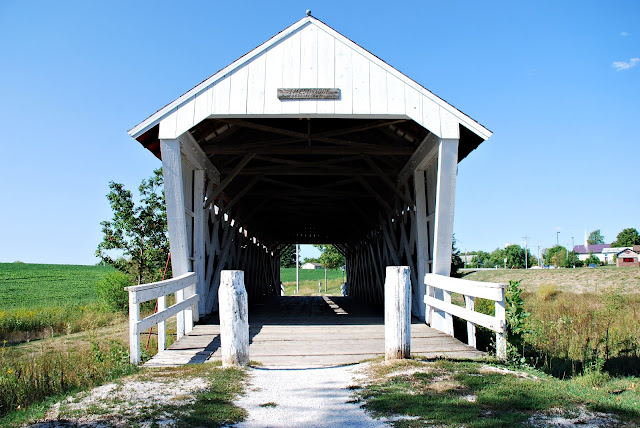 It has been moved three times, the last time to its present location by a desire to protect it from vandalism. 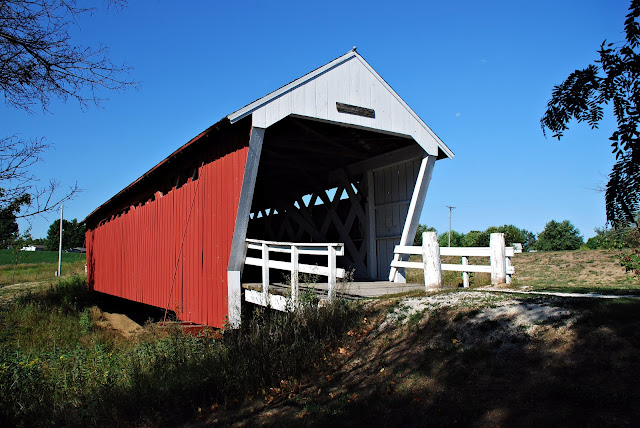 Like the Imes Bridge, the Cutler-Donahue Bridge, another with a pitched roof was moved to the Winterest's City Park for its own protection. 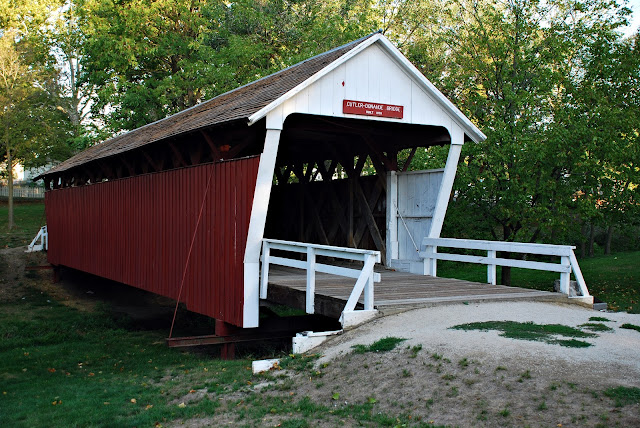 There are two other covered bridges in Madison County.  Hogback Bridge was back in on a road that looked iffy to take the Little House on the Highway on so I didn't go to it.

The other is Roseman Bridge.  Confused like Robert Kincaid (Clint Eastwood) when he pulled into Francesca's farm asking for directions to Roseman Bridge, I too couldn't find it.  Later towards the end of the day I met a couple from Colorado doing the bridge tour.  They had a better map than I and it was then I discovered I was on the wrong side of the county for Roseman Bridge.  This is the bridge where Francesca tacked her note to Robert telling him to come for supper "anytime the white moths fly".  Evidently there are now dozens of little holes left by others who have tacked up love notes next to the one Meryl Streep made.  I decided to save it for another trip, maybe when the white moths fly.

SPOILER ALERT
Don't read any further if you haven't seen the movie but intend to.

The lady from Colorado asked if I had seen the movie.  I said not only had I seen the movie but had read the book too.  Immediately she asked if I thought Francesca should have stayed or went with Robert.  I hesitated a moment then said "go".  She agreed right way.  Her husband couldn't seem to care any less about the bridges or the story.  What do you think Francesca should have done?

Have a nice Thanksgiving to my U.S. followers and everyone else, enjoy the weekend.
Sinbad and I will be back then.

What fascinating bridges. I have not seen the film and had no idea that the bridges existed. Why are they covered?

Looks like something out of the dukes of hazzard !

She certainly should have gone with the photographer! I liked the movie so much and read the book as well. The moment she stayed in the car at the end of the movie... so terrible sad.
What a shame the bridges are vandalized, can't imagine why people do such things.

I love those bridges! Great photos. Have a wonderful Thanksgiving also!

HI John....Love those covered bridges!! I have been over a lot of them that are still passable ..so they say eeeks!!
Vermont N.H. Maine have a lot of them !!
They are fascinating!! Guess they didn't have Trailer Trucks then ; )!!
Grace

didn't see the movie. didn't read the book. the bridges are cool, though. glad they're taking measures to protect them. even country kids get bored and become vandals.

Didn't care for the movie as much as I loved the book--all of his books. What ever happened to him? He seemed like a great writer. He had a book about India with a girl named Jellie and a man named Michael Tillman (my brother's name), but then no more.

A wonderful post John. I am aware of the book and the film but have never seen/read either... I will do soon.

well I did see the movie long ago ...and I've quite forgotten the storyline. I remember the bridge and I remember one rather irate hubby when his wife was playing music and he burst in the door in a temper and shot the gramophone needle across the vinyl in a rage. I can remember really getting into the movie and enjoying it but my memory is ailing now! Nice snapshots John.

this is a nice tribute to Iowa. I happened to be living there when the book was released and read it then (and drove the tour too). I liked it well enough. I saw the movie and thought Eastwood was completely mis-cast in the role of Robert Kincaid. Francesca did the right thing in staying with her husband. Being the person she was, it wouldn't have worked any other way.
Happy Thanksgiving to you and little orange fur ball. (your photos of the bridges are spectacular btw).

Vandals and surveillance cameras on covered bridges? In Iowa?!! Yikes, we really are going to hell in a hand basket.

I like the extra craftsmanship that went into making the overhangs on the two ends of the bridge cover. Reminds me of big fins on an old car from the '50s. Not really needed for anything, but gives it a lot of class!

I liked seeing these...the county next to us has a LOT of covered bridges. Parke County Indiana....if you like covered bridges, you might really enjoy your visit there. I have a few of them on both my blogs...I think I have them label covered bridges. But I doubt I have seen them all and for sure have not taken photos of all.