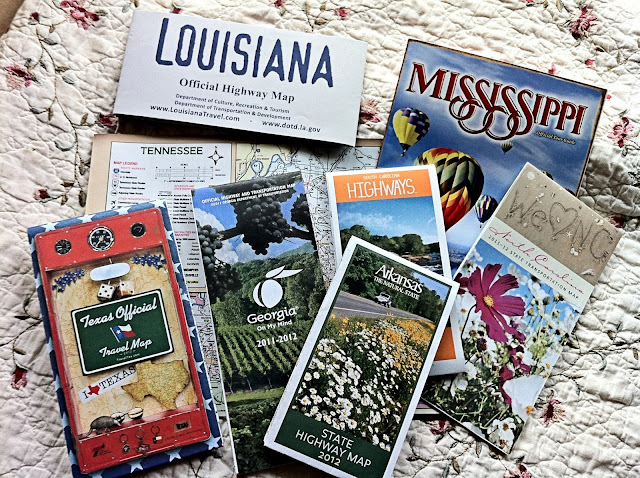 Our upcoming road trip will take us through the Deep South, The Land of Dixie.  I am planning on leaving the last week of March.  Meanwhile I've been doing my homework - research.  Just like the Great Plains Trip, our route will be dictated by the weird and unusual that can be found along the back roads America. The adventure will really begin as we pass through lower Oklahoma into Arkansas, down into Louisiana then east through Alabama, Mississippi, Georgia, up into the Carolinas then west through Tennessee.  I sent off to the states for their visitor packets which all came back with a road map except Alabama.  Times must be really tough for Alabama.  The maps come in handy to circle the towns with kooky things to see from my print-outs and then our route is decided.


By chance one day I came across one of those news articles - the Ten Most Dangerous Towns in the U.S., or highest murder rate per capita, or most crime ridden, something along that line.  Anyway, 6 of those 10 were in the South.  Pine Bluff and Little Rock Arkansas, New Orleans Louisiana, Mobile Alabama, and Jackson and Memphis Tennessee.  Well I always steer clear of the major cities anyway, but the trip should prove interesting nevertheless.  We'll be okay folks.  It isn't like we will be touring Afghanistan.

Can't wait to see you posts about a new trip. I enjoyed your last one very much. This one I am curious to watch the places you visit. I made a tour in the south too in 2008 and hav e sweet memories about it.

Oh I can't wait to see your posts from this trip. There will be plenty of weird and unusual.

Look forward to following your new adventure! Take care though.

you picked a good time of year - before it gets insufferably hot!

Have you got your plan for Tennessee? Funny thing, I grew up there and even went back and lived for a couple years after we got married...was happy just being there. Had no desire to get out and go a lot of places. And still when we go down, my favorite thing to do is to set off on a rambling drive with no destination in mind.

Oh another road trip, yay! You've got courage alright - the farthest south I've ever gotten was a layover at the Dallas-Ft. Worth airport and I couldn't get out of there fast enough. I'll bet this road trip is going to be very very interesting and I look forward to your adventure with Sinbad. Have you considered getting a gun? Just kidding. happy week to you and little orange fur ball. (I really like the trailer trash in previous post too).

Sounds like a wonderful trip John... I will be following.
I have my knee surgery next week so hope to be out and about myself a bit more soon.

Look forward to reading about the strange and wonderful places you will be searching out for us all to enjoy.

I'm a big fan of road trips. May I be so bold as to encourage you to visit Memphis and the Great Smokies? Opposite ends of the state but full of interesting sights/sites. And definitely Charleston, SC. Spent a week there once and found it to be historically fascinating, physically beautiful, and offering the best food ever. Sorry nothing weird there that I can remember. But weirdness on American hiways and biways is not hard to find. Looking forward to your posts.

Oh this should be good. Redneck country. Have fun.

I agree with Oakland Daily Photo, you have to stop in the Smokies! Lots of weird around there, especially between Pigeon Forge and Gatlinburg. The back roads of Cherokee might serve up a few prizes for you as well. We're thinking about going back there this year in late October for the fall color, but I'm in Kentucky today and happy to be out of the snow!

What fun! I can't wait to see posts of your trip.

I agree about avoiding the big cities!!