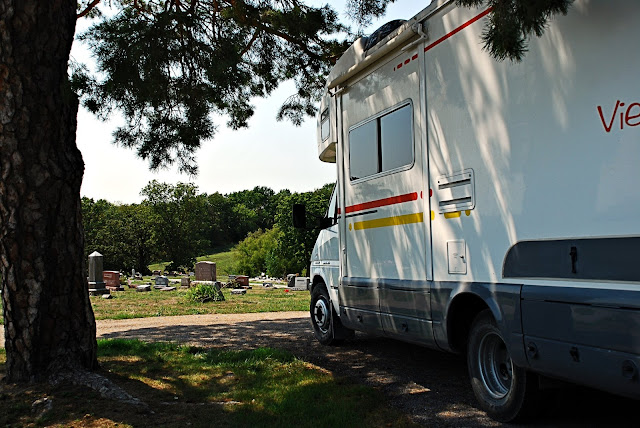 A few of the scheduled stops during our Great Plains States Tour of last year took us to cemeteries.  I am not as fond in visiting cemeteries at this stage of my life.  I get to looking at dates on the markers, start doing the math and get uneasy as to how close I am in age to the person lying in the ground.

Sometimes I use the word graveyard instead of cemetery.  One time someone called me on it wondering if I grew up back east for people rarely say "graveyard".  I had never gave it any thought before.  A small bit of research revealed that places of burial were always called graveyards and most commonly were close to churches.  But as little towns became cities, populations increased and open land became scarce, cemeteries were established as privately or municipally owned sites separate from the church.

I think I have a few graveyard stops planned for our upcoming Tour of the South.
I'll try not to let the headstone math get to me.

Nice explaining. Headstone math is also a good remark as reminder for my own age. Thanks for showing.

I was always surprised to see cemeteries in the open field in the US. No fences, just a couple of stones in the grass along a road. We don't know that here.

I've always used the words cemetery and graveyard interchangeably. We have some really cool ones where I live. The headstones go back to the mid 1700's.

yeah, that would be too depressing. :)

Being in the funeral service industry for several years, I enjoy wandering through old grave yards when we are traveling. You can learn a lot about people by what their headstones say. I'm looking forward to your blog as you take this trip South.

Nice definition to know. We call them cemeteries and they are church run. So I don't know where that comes from.

I find headstones quite fascinating especially the really old ones. Look forward to seeing the graveyards you will be visiting.

Cemeteries are fascinating to me. It's obituaries in the newspaper that get me to doing math on my fingers. I always look for names I know.