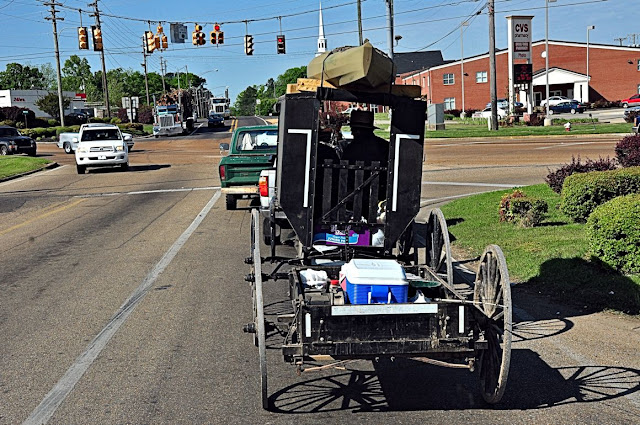 Seeing the kayak on top of the buggy was something out of the ordinary.  Towing a trailer was also.  Upon closer inspection I saw not only the ice chest but a smaller ice chest, a large water carrier, two fishing poles and other items which really looked like all for camping.  They were a young couple.  You couldn’t tell so from the guy with his long beard but ever once in awhile the woman would turn around to look and see how much traffic was backed up behind them and she was just as cute as could be with her little straw hat on.  The line was me, a logging truck and then a long string of cars.  I was in no hurry and enjoyed admiring the cute Mennonite.  Finally after about a quarter mile or so of crawling along they pulled over and the logging truck pushed me on around them.  Incidentally that left rear wheel on the trailer was really wobbly.
Fun to watch when I wasn’t looking at her.

It was a leisurely drive on the back roads of this day coming across many interesting sites purely  by accident.  The plan was to stay at a State Park along the that afternoon but when I pulled in two bicyclists waved me to a stop.  They informed me the park was closed.  “They have it barricaded off.”  We figure they expect the flood waters coming down the from up north (a few days away yet) to inundate the campground and naturally they don’t want campers in there.  Bummer for me as I had to drive an hour north to find something else and it was already tea time.  Worse for them as they were on bicycles and already had peddled over 50 miles for the day.  I told them if I were on a bicycle I go in there and camp anyway in some secluded spot.  No one would ever know and who would run a pair of cyclists out who were just staying for the night?  Anyway, short post today because of impending flood waters, not good wifi where we are for the night and I’m tired.

I have seen Amish and Mennonite before, but never a set up like that. Very cute!

What a contradiction . A buggy with a plastic ice container and a great little travel story. Also like the on first sight random hanged traffic lights in the air above the road junction. Great shot again.

I have mixed feelings about them. To deny the world you are living in and raise your children in such an old fashioned way. I feel sorry for them.

The mess of traffic lights in the intersection looks like a recipe for mayhem.

I am sure there's no six pack in that cooler.

Hi John...Well I guess that's one way to go camping if you short on cash and have plenty of time : )
Hopefully they didn't need to change a wheel ! lol
Grace

See them here in Pa all the time but never with a canoe on top.

What a great image!

It's great this is a big world with room for everyone to do their thing! It's not easy living life according to your own convictions regardless of what others think. Whatever you think about their beliefs this world needs more people who are willing to follow their own conscience instead of trotting along after everyone else.

All the gear reminded me of the old days when we camped without the benefit of light weight gear from the back of a station wagon. I had a sleeping bag made from a mover's blanket -- and when it got wet it literally took two adult males to lift the thing!

Good for them! Pursue their joy and the heck with the rest of the world!