Our World Went Upside Down Today

We entered through the as another one of those storms I’ve been dodging blew through the area.  My destination was Pigeon Forge.  Now with a name like that I figured Pigeon Forge would be a cute little country town at the base of the .  How wrong I was.  I felt like we were driving down The Strip in .  It was a six lane divided boulevard lined with tourist attraction theme parks, hotels, theaters, entertainment centers and shopping boutiques.  If that wasn’t enough, we hit it at the beginning of some weekend vintage car sale event.  For several miles on both sides of the boulevard parked door handle to door handle were classic old cars all with for sale signs in the windows.  Some were restored; some were rusty heaps sitting on trailers.  If you were thinking of getting a classic and couldn’t find it there, you best rethink your dreams.  Needless to say the traffic situation was horrendous.  All I wanted to do was put Pigeon Forge in my rear view mirrors, so I blew off the site on my list.  And then all of a sudden, there it was, on the boulevard no less.  I wheeled into the parking lot, got my picture and left. 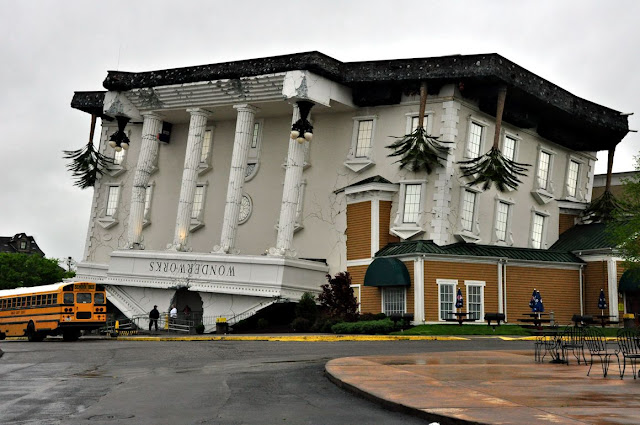 Wonderworks is an interactive experience with games, science, weather, etc. geared for kids and the whole family.

I have to say there was another place we passed by as the traffic mass pushed us along, it may have been a hotel I am not sure.  It had a life-sized creation of King Kong hanging from the top of one wing of the hotel which I think was created to look like the Empire State building, but again, I barely caught a glimpse of it.  And if I am not mistaken King Kong was holding a crushed, again life-size, bi-plane in his arms.  For all I know, Fay Wray may have been laid out on the edge.  It was ever so much as impressive as is the upside building but no way could I change lanes, turn around and get back to it.

Okay, I found it for you.  It is a new attraction that is opening soon if not already. 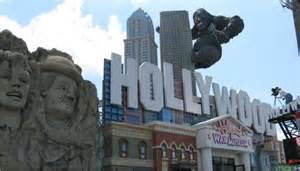 If you are thinking I should have went back the next day, it was only going to be worse.  People were camped out or I should say had their spots all saved for what most likely would be a huge parade of cars going up and down the boulevard all day Saturday and Sunday. Think Hot August Nights in Reno, Sturgis in South Dakota or Motorcycle Week Daytona Beach and you get the idea.

I'm with you John; keep far away from the maddening crowds .... the upside down was kind of awesome though

What you get when donald duck is the architect. ( Bit of a joke but it certainly activate your brain). Great posting again. I like it.

Oh my, that must have been an awfull experience. I can imagine how you felt to be a part of that circus. Lucky you came by that weird building up side down. You must have thought you were halicunating. It is really crazy to build something like this!

yeah, the traffic nightmare would put me off of it, especially if you intended a nice, quiet scenic place.

the upside down building would normally be cool, but with the explosion in west this week, not as cool...

This is Dolly Parton's creation, right? Called Dollywood? Or is that another part of the park? Like you, I will never know, but I do know that the Great Smoky Mountains are just heaven. Its wonderful to drive through, to get out and take long walks through Cade's Cove.

Hi John...My heavens when your on the road your world is one crazy thing after another, and now it has turned upside down haha!
Hmmm wait a minute ...I'm thinking with the events of late that the hold world has turned up side down!
Enjoy, and watch out for those sleepy looking little towns ; )
Grace

Now that would be something different to see.

A friend of mine and her husband have been in Pigeon Forge all weekend with their Hot Rod. They travel around to several of these car show week ends. My friend's husband has bought, restored and then sold several of these cars in the past few years. They love it! From the pictures I have seen from this event, I bet it was tough getting through.
But, then most weekends in Pigeon Forge and Gatlinburg are pretty crowded down the strip.

Are you sure you really saw this? Hmm, very interesting, will tune in for more stories. Where are you heading next?

Wow, I love the Wonderworks building. What an eye catcher! Sorry about the masses of people.

We were so unimpressed with Pigeon Forge we took not a single photo and blogged not a single word! We'll be back in the area in the fall and I can't wait. Gatlinburg wasn't so bad...but traffic wasn't a peach there either.

What, no stop at Dollywood?