Bryceland, the little town trying to be big. 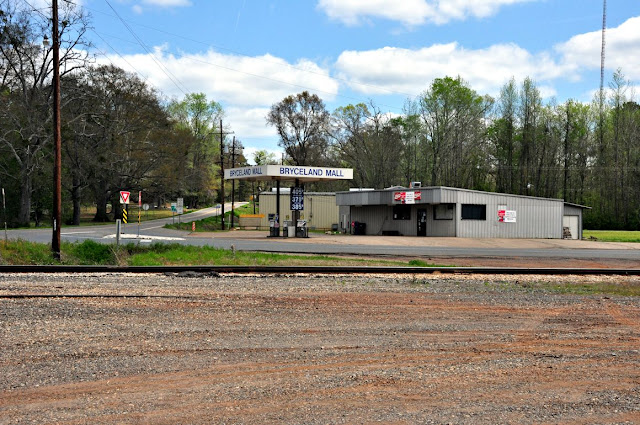 That is what came to my mind as I had my lunch on this side of the tracks.
Maybe the owners of this store were trying to be funny.
Where the rest of Bryceland was, I never saw it.

After seeing my day's attraction I thought I would just drive around on the back roads to see what I could find.  All there was were trees, woods, forests and still more trees.  Little towns on the map are widely spaced apart in the top half of the state.  I soon realized that driving all day long I would be viewing trees and little else.  If there was anything to photograph, like my dilemma in the Arkansas Ozarks last fall, there is no shoulder to pull off onto to take any pictures.  I turned north back to the interstate highway figuring I'd pull off it whenever a little town came by. 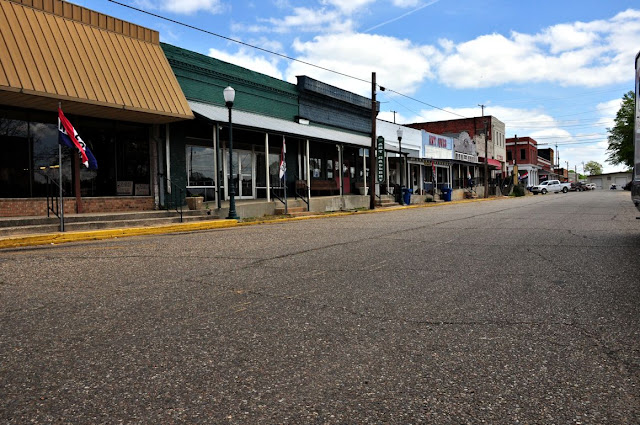 This is the business district of Arcadia, Louisiana.  Every store is empty.  It was like that around the block.  I think one place was hanging on trying to sell baked goods.  There were a couple of "antique" shops but they looked more liked storage houses and hadn't been open in a long time.  Those are Welcome flags and they went around the block, welcoming no one.
And this was the same story for most little town's businesses, many of whom were in disrepair or ruins.  The Family Dollar and Dollar General stores were doing fine though.

Many people in this area are probably without jobs.  They could create a job for some by just picking up the dead animals along the road.  If I had a dollar for every dead animal I've seen it would just about pay for my trip.  The opossums and raccoons alone would pay for the fuel.  I think all the First Baptists churches I've seen would make up the difference.  And where are all the Second and Third Baptists churches?  I haven't seen a one.

What does Poverty Point have to do with this?  Not the current state of the economy.  It is the name of the State Park we're spending the night in.  Nearby is an archaeological site dating from 1650 to 700 BC.
You can read more about it here.

Great comments by your pictures . It reads a bit like the travel stories of Bill Bryson. But with a lot more illustrations. Love it.

Your stories are great and the photos too. The mall in the first one is so funny and the name of your State Park, very inviting.

I suspect that if one lives in Bryceland a good sense of humor is essential! I can't imagine a permanent residence that remote and I'm a guy who claims to be a hermit.

It's funny to live in a country where everyone is so determined to buy cheap that they put all their neighbors out of business buying at the Big Box stores.

not a very optimistic name for an overnighter John; I loved the mall!

Hard to believe that a once thriving town has closed up. Here there are many ghost towns, but as soon as the taxes haven't been paid and the local govt. takes ownership the buildings are bulldozed.

i do like the 'mall', but sad about the towns, though.

Those are some nice looking buildings in that second shot. Think I'll skip the mall.