It is a darkly overcast day, rain drizzling off and on when all of a sudden I see up ahead a dark object in the road.  Here is this guy riding along, no lights, no reflectors, no bright colored reflective clothing, not the easiest thing to see through a rain splattered windshield.  You can’t see it here but his dog his running alongside (on a leash) to the right.  He cannot move over for the rumble strip on the side of the road would rattle him senseless.  Unfortunately I hit a bump just when I clicked the shutter and cannot make out the all the wording on his sign.  It is a website to donate for breast cancer research but the rest I couldn’t make out.

While reviewing this I noticed I happened to catch a couple of the tilting telephone poles in this shot.  I was talking with two couples from Georgia the other day and they told me to watch for the leaning poles.  These are survivors from Hurricane Katrina, the ones not blown over completely or snapped off. 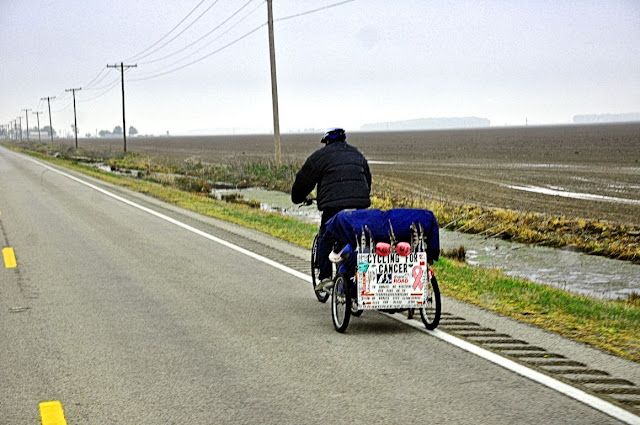 I saw on my map .  I checked it out.  You drive in two miles off the highway into a swamp.  I was liking this already.  Park then walk a few hundred yards on this boardwalk deep into the swamp.  This is more than I could have ever hoped for! 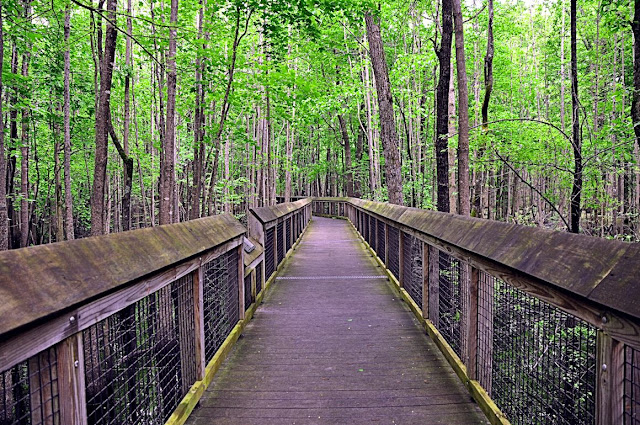 It was so quiet except for the birds; birds making strange calls from somewhere for they were not to be seen but their sounds carried through the swamp.  The boardwalk took you to a stone monument marking the initial point from where the 1815 land survey began.  More on that later but I just had to show this much for now.
I had the whole experience all to myself too. 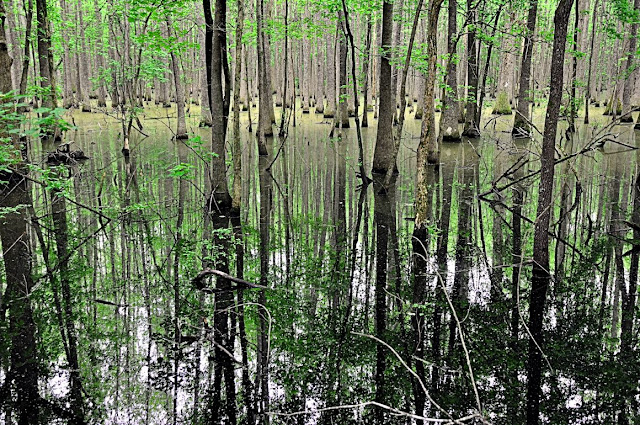 As for the Southern Pride, I realized today while driving along that I have not see one person standing on a corner holding a cardboard sign begging for money since I’ve been in the South.  In it is a plague of them out there on every street corner.  No doubt there are more people here in the South without jobs, existing at poverty level, way more than in but these folks have pride.

Sincerest greetings from the Netherlands,
DzjieDzjee

The cyclist is a common sight here. Some people cycle around the world this way for a good course. When I see his package he must travelling some time I think. Hope his dog can sit in the backcarriage too so now and than.
The boardwalk looks stunning and to be there all on your own must have been great.

Too bad the doggie isn't visible in the photo of the bicyclist, but that's a wonderful shot. I LOVE the shots of the swamp, and I'm looking forward to your future posts about that adventure. Enjoy the drizzle, and be safe.

i sure hope that cyclist and his dog stay safe! we have panhandlers in texas - even if they've made it illegal to beg AND to give them money, too.

i like the views of the swamp. very cool.

The bike rider is a hazard with a good cause.Awesome photos in the swamp with the reflections.

Hi John...That is quite the rumble strip don't think I have ever seen one so bumpy looking!!
I feel bad for the doggy,but the fella has a good cause to promote!
That bridge is I like and the reflection of the trees is real nice!!
We have homeless people begging in the city,but not to bad!!
Grace

I love the swamp photos. Very scenic!
The leaning poles are interesting. Looks like they need shoring up or replacing.

There are lots of people working down South when other parts of the country are not. There are small businesses and manufacturers and NO UNIONS.(Or very few)

Bravo to the man on the bike.

Just saying, I love ALL these photos on this particular posting. The bridge, the trees, the green lushness. Very nice post. You are having fun...