The Trip Has Officially Began

We have arrived at our first point of interest, 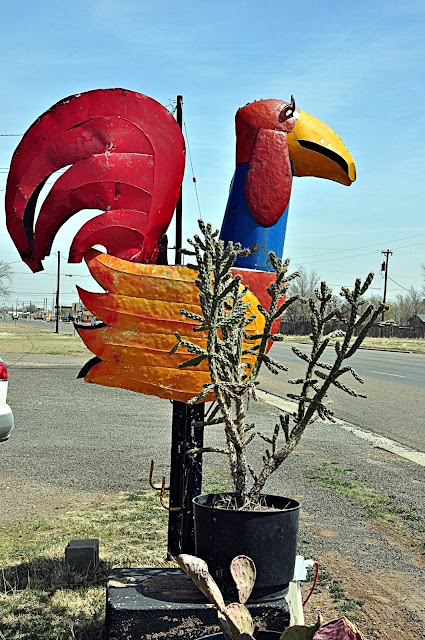 Now if you followed along on our Great Plains Tour last fall you'll know then that some of the sites we seek out turn out to be duds.  Well this one being the first for our Tour of the South had that much going for it.  Also having followed along in the past sometimes a site will have some other item more interesting or we meet up with a character.  Here we met Martha. 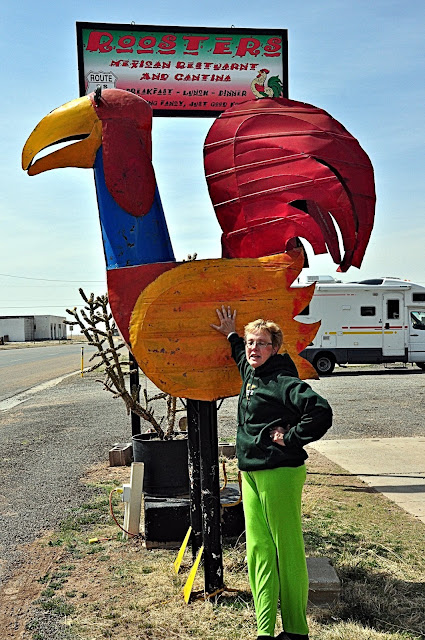 She had just pulled in for some Mexican food and seeing me taking a photo quickly deduced I was a tourist.  She said I should go into town to Rourkes Hardware store for "It is the only hardware store on old Route 66 that is still owned by the original owners when Route 66 was all there was".  Next she asked if I was going to see the Cadillac Ranch and I said it was on my list.  Well off she went telling me how the guy who built it is now in prison and been there for 5 years.  Something to do with his fondness for young boys and locking them up in a chicken coop.  Long ago the guy's wife had gone off to France to study art, came back and all of a sudden he thought himself an artist and created Cadillac Ranch.  She rolled her eyes and raised her hands up in unapproval of his so-called art.  Then I was told he had dug all the cars up leaving holes behind relocating the cars elsewhere and called the first spot the Cadillac Grave Yard.  I have yet to see it so cannot verify any of this.

Interspersed with all the information she was giving me of where to go and what to see I learned she was celebrating her divorce of 5 years from her rich passive aggressive not so bright husband of 33 years.  He has 13 million dollars in assets, she ended up with 2 plus million and...well all of this was coming at me so fast I was unable to comprehend it all let alone ask questions that popped in and back out of my mind just as fast.  "Men think women just want them to jump in the sack with them when what they really what is someone to have an intelligent conversation with.  They should have a site on the Internet where men and women can meet who just want meet someone who can carry on intelligent conversation."

Next she was telling I shouldn't go south into Deaf Smith County for they'll pull you over as soon as they see you're from out of state.  They'll make up a reason for stopping you.  Their motto is Enter Deaf Smith County on vacation, leave on probation.  "If you're stupid they'll get you.  But you seem intelligent so you'll be fine but they won't care for the hat you are wearing and tuck in your shirt."

Then I learned all about the big cross in Groom on the other side of Amarillo.  I said that sounded familiar and that I had Groom circled on my map for some reason and... "Oh you have to stop for that.  At one time it was the biggest cross in the western hemisphere but someone went and built a bigger one and..." I lost track about all she was telling about this guy who built the cross, his wife who was rich and from the Bush family - not President Bush but some other Bush.  "Bush baked beans?"  No, not that Bush but they were rich and well known in these parts whoever they are.

She freely interjected comments about conservatives and Christians (I never saw them coming)  but I will be okay because I am "not from Los Angeles or Berkeley".  She had verified that with me from the beginning and why those two cities, as if they were somehow linked being 400 miles apart from each other.  I had to ask. "Liberals!  You think anyone here voted for Obama?"  I never had to answer any question for she was quickly on to something else like why she never learned any history in school for the only thing history teachers talked about was the school football team.

I wished her well in her new life, thanked her for the information, honestly said that it was fun talking with her and we said our good-byes.  I went back into the motor home and tucked in my shirt.

That was quite a conversation you had, she must have been happy to meet someone to talk to and had some nice advises for you!

...so a woman bought all those words out of you John! Phew, you must've been exhausted at the end of the intelligent conversation. Your wife would've managed a couple quiet cuppas while you were gone yakking ... I could just picture it all, honestly. "A character" that made an impression in your day and no doubt bought about a few laughs back in your van, relating to 'the live one out there'

Great conversation and I like it that by putting a person in the second picture you see that the rooster is a bit greater then you should think by seeing the first one.

oh my WORD! that woman DOES need someone to talk to - or talk AT. :)

yes, stanley marsh is under allegations for teen molestation. but he's not been in prison for long as the latest charges were just filed last november (when he turned himself in).

there are some people who have all the information you don't need to know. Yes there are characters in this world. I guess some of them make great tourist attractions.

I don't see how anyone wearing lime-green trousers can criticise anyone else's attire.

I hear they have good veggie burgers in Deaf Smith County. ;)