Andersonville was the Confederate prison for Union soldiers captured during the Civil War.  Nothing remains of the prison camp but through drawings, photographs and archaeological diggings portions have been reconstructed to give us an idea of the prison.

This gives you an overall idea of the scale of the the prison camp.
Click on these signs and the picture will be bigger and easier to read. 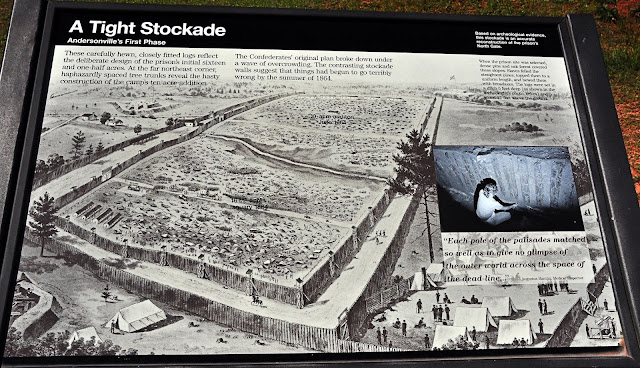 Prisoners were off-loaded at a nearby railroad depot 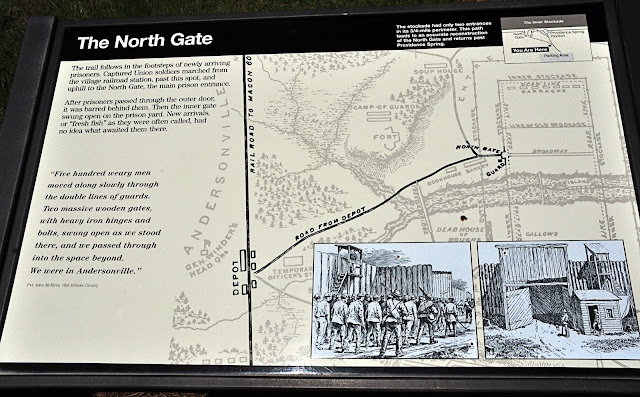 and marched up this slope having absolutely no idea what lay in store for them.  All they could see was the high stockade to their left. 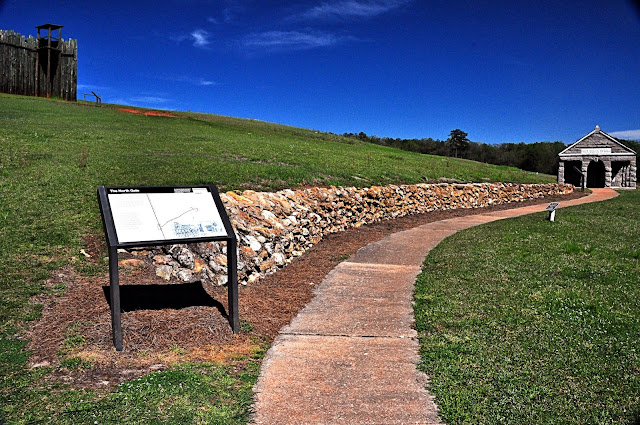 They entered through this set of gates 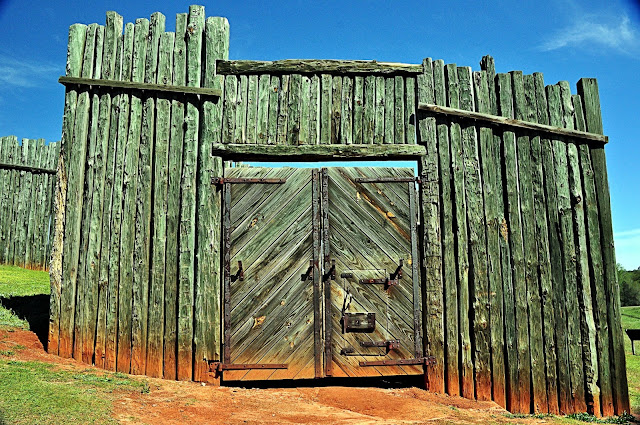 into a space between a second stockade wall where then the first set of gates were closed behind them.
This picture is taken from inside the prison grounds looking out onto the second set of gates.  They would have entered through the first set in the distance. 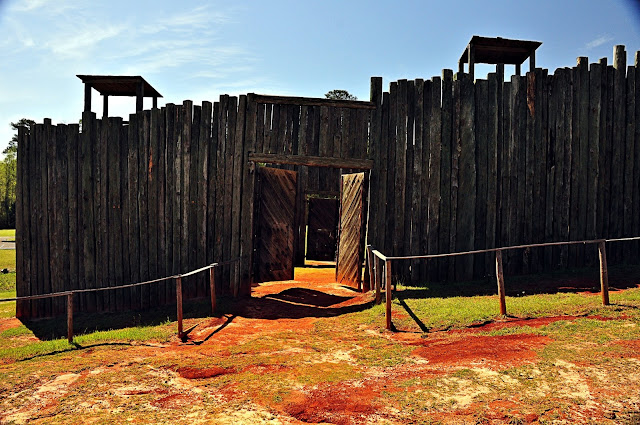 This then was their first sight of the living Hell that waited for them. 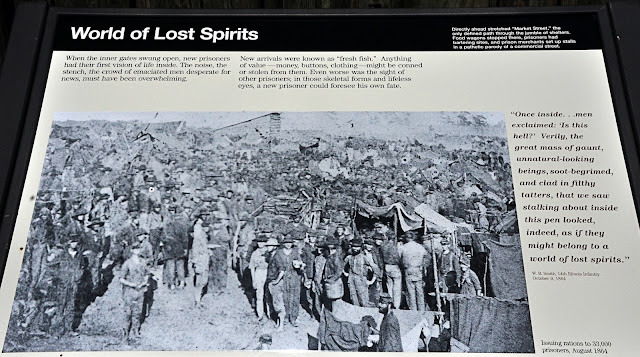 On the other end of where the prison grounds stood a corner of the stockade walls were reconstructed along with a small encampment to give you and idea how it was configured.  Notice the two lines of poles in the distance.  These are marking the actual line of the inner wall and the deadline railing. 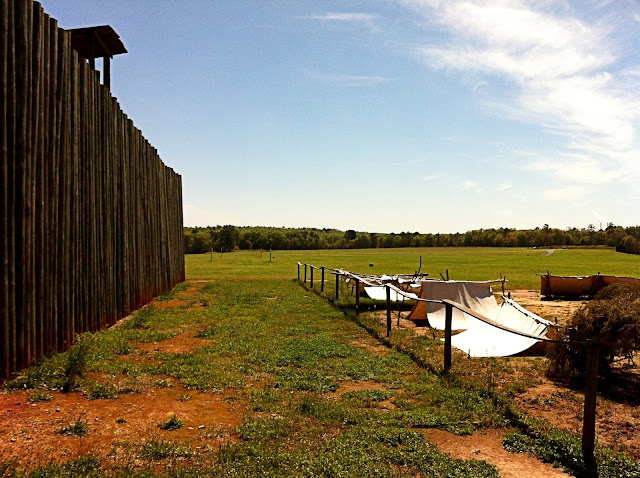 What you see here is the inner wall to the prison camp.  The low railing fence is part of the camp and known as the "deadline".  The space between it and the stockade is "no man's land".  If you set just one foot across the deadline, the sentries in the "pigeon roosts" spaced every 90 feet apart were on orders to shoot to kill. 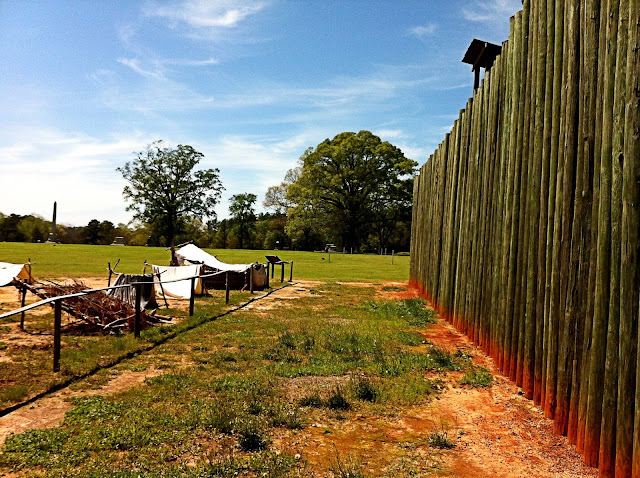 This is from an original photograph taken from one of those sentry towers. 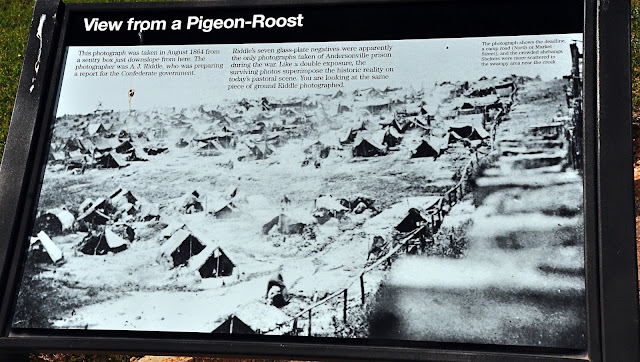 When the Confederacy first built the prison, they did so with good intentions but had no idea as to the number of prisoners they would be dealing with and those good intentions ultimately proved to be the death of many a Union soldier. 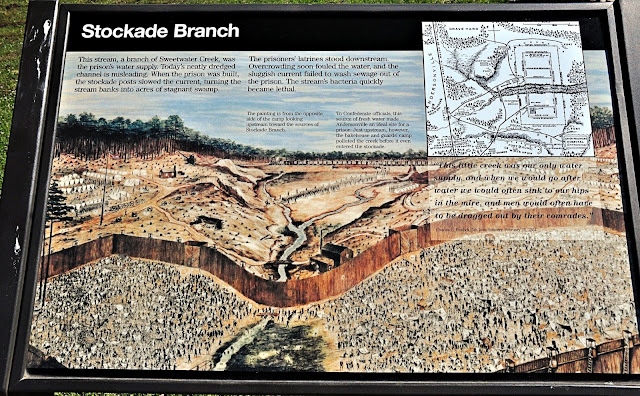 This is the stream bed (to the left) today. 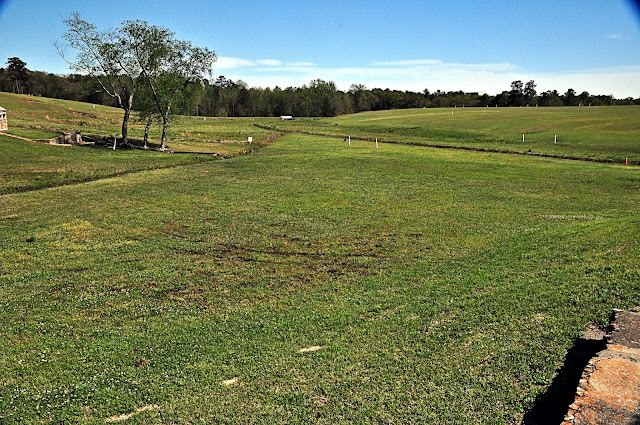 This explains how the plan for drinking water and waste removal failed. 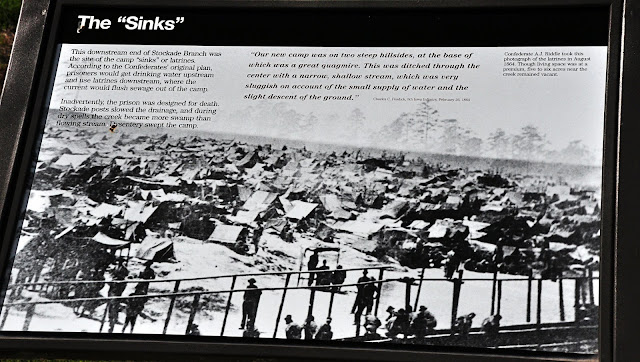 I first went in the the visitors center before touring the grounds.  I expected it to be about Andersonville but right away realized it was devoted to all American prisoners of all the wars.  The displays, photographs and re-creations of prisoner conditions were horrible and depressing to say the least, with what the Japanese did in World War II and the North Vietnamese in the Vietnam War being the worst.  I would bet anyone that I now hold the record for passing through all of the exhibits in the visitor center faster than anyone else.

I stopped back at the visitor center after touring the grounds.  I like to buy a book about the places I visit as a souvenir at most visitor centers.  Andersonville National Historic Site had a large selection and I thumbed through a couple of books taken from dairies and books written by Union soldiers who were at Andersonville.  I thought to myself, Do I really want to read this?  I put them back and walked out, not taking even one picture of the visitors center.

After leaving Andersonville I was bummed out for quite some time until I reached my next destination which finally took my mind off of all I had just witnessed.

I assume that this is about the army capture the men from the enemy army because what is done to the civilians is so much more worse there are no words for at all.

Sometimes you wish you hadn't entered a museum. History can be so depressing, people don't learn anything from the past. Wars starts over and over through the centuries, it never stops.

Events like this really do put a strain on ones desire to read history - but I think we are duty bound to be as informed as possible.

It would be ideal if humans learned from their past mistakes and didn't repeat the same things over and over.

i cannot imagine overcrowding, water and sewer issues, etc. back in that day...

Did the interpretive center ever talk about escapes? Any successful or did starvation, illness, disease just keep them right where they were?

We really have no idea what any POW goes through. It is very sad indeed.

...the old photo (view from the pigeon roost) and the description of the foul stream... " a prison designed for death" but originally created with good intentions. UGH. Not sure even I would have purchased a book on this place.