De Kalb Texas is located in the far eastern part of the state.
I popped over there from Louisiana to see this. 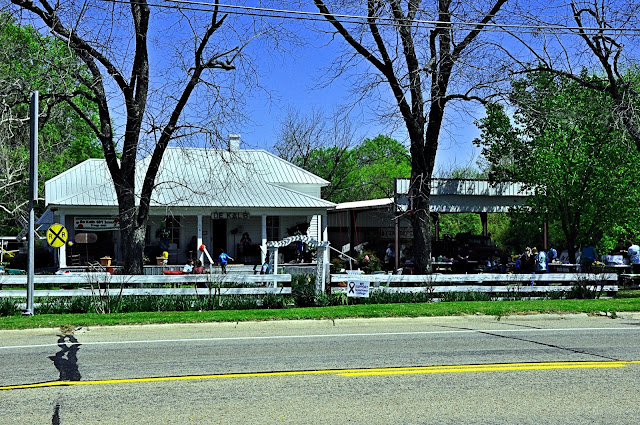 I braved the second annual gathering of Girl Scouts to bring this feature to you dear followers.  I just want you to know the hazards I take sometimes in bringing you these wonderful stories.  There must have been close to a hundred of them.  Looks like this Girl Scout has had enough for the day. 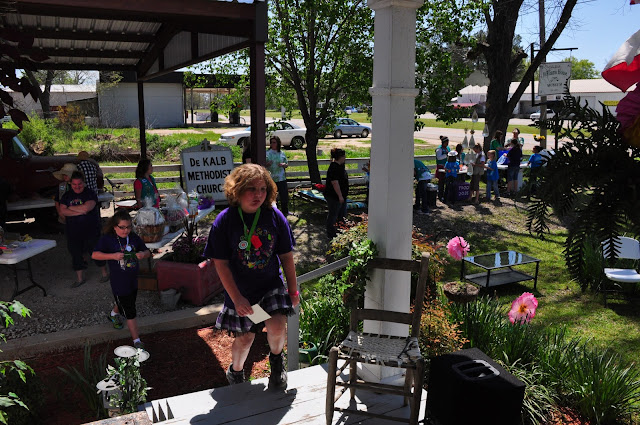 A brief write-up of the tragedy.  There has always been some controversy over the event so if you are interested click here for the Wikipedia story and scroll down to the bottom about Ricky's death. 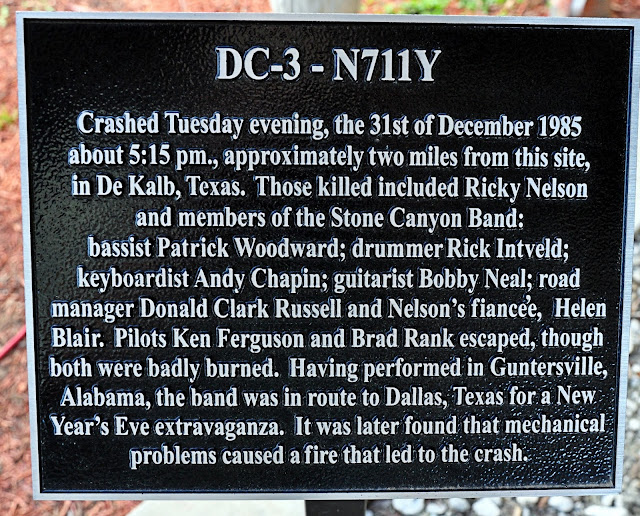 This is all that remained of the plane as the rest was entirely consumed in the fire.  No doubt the engines survived to some degree but...well...I forgot to make any notes after talking with the nice lady at the museum.  Sorry.  It's the Girl Scouts fault. 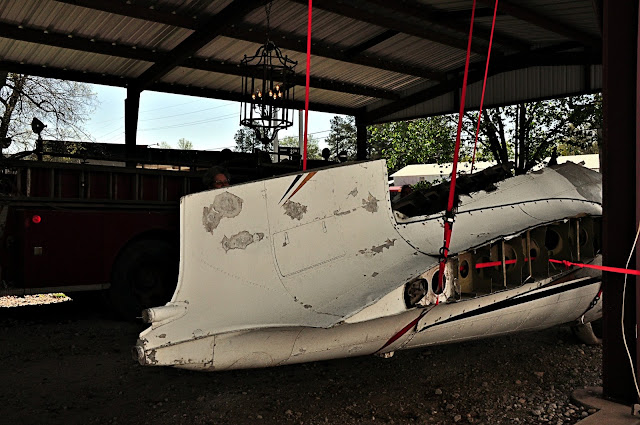 The tail stabilizer is missing as someone made off with it
before the tail section could be moved into town. 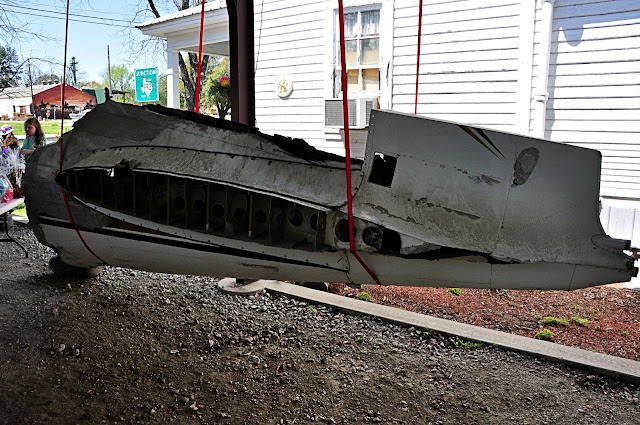 The plane was a DC 3 that belonged to Jerry Lee Lewis.  As the Wiki article mentions, Ricky dreaded flying but refused to travel by his own personal tour bus.  Plus this plane had a long history of mechanical problems and knowing that, if I were Ricky I would of had my own bus.  I too dread flying and will not do so anymore since I now have all the time there is to get wherever I want to go.
I just wonder why he refused to travel on the road by bus. 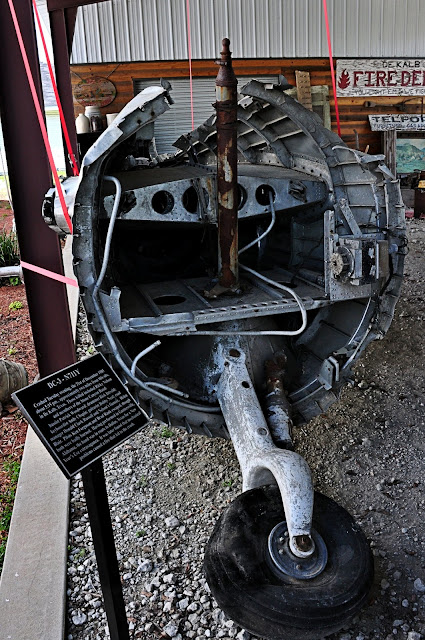 Inside they had the corner of a small room devoted to Ricky Nelson.  The lady pushed in a VCR tape with the recording of the local news broadcast from that night for me to watch.  I thought I was going to get to sit on the floor watch it on that black and white TV,
just like the old days when I'd watch Ozzie and Harriet. 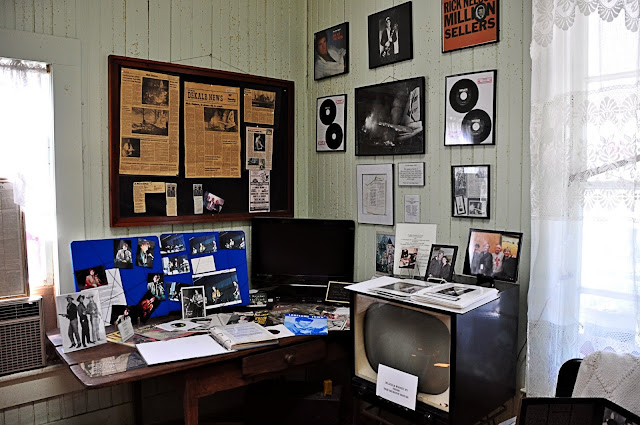 The night of the crash 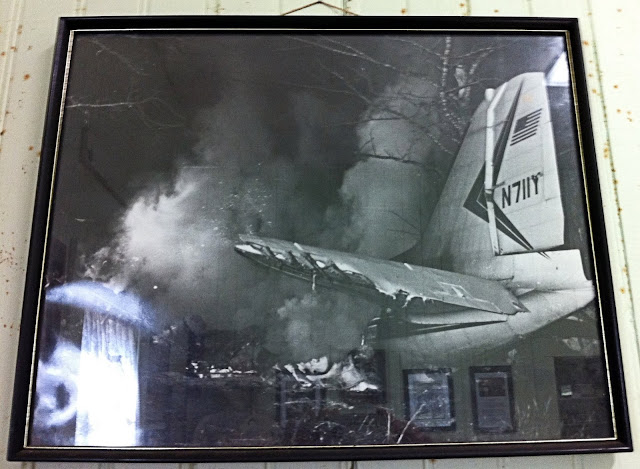 The next day and you can see the now missing stabilizer still intact. 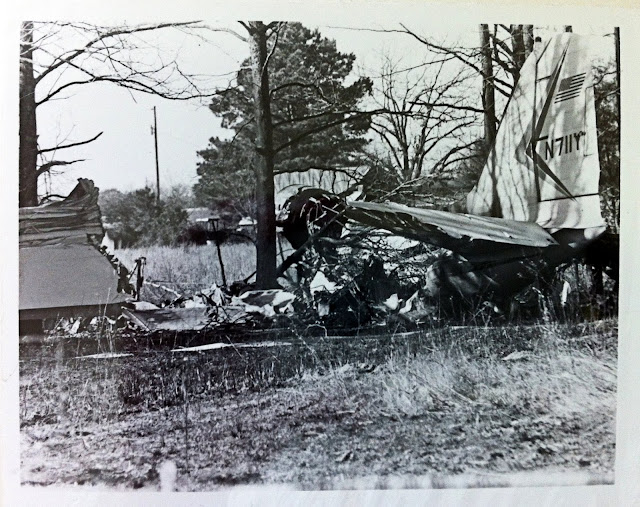 More tomorrow.  Have to go.  Some Girl Scout cookies await me.
Got milk?

that was sad news; I used to love watching the Ricky Nelson Show and loved his songs/voice/guitar playing. I hadn't remembered that the plane had belonged to Jerry Lee Lewis. You sure get to travel down memory lane ...Cheers John

I am very thankfull that you confronted a bunch of girl scouts to bring us this story about Ricky Nelson. Another victim of his own popularity as was Buddy Holly, Patsy Klein, John Denver, Otis Redding etc. Famous,money, private planes. It seams a deadly combination.

There were many artists crashing with little planes in the past. It is a shame their careers had to end so abrupt. But now they die of drugs or alcohol, so what is the difference. They become a legend.

I look back with great fondness to the many hours I flew in DC-3's. they weren't pretty. They wee tanks. Many times they were freighters and we sat on the freight. sometimes they had canvass seats. Some were fitted with skis. Yes, we had mechanical problems. Good engineers kept them going like the time we were on the runway and the breaks failed.They were fun times.

So glad you braved the girl scouts John. That was interesting. Waiting till tomorrow.

That was a sad day. I remember when Lynyrd Skyrnyrd s plane went down.

Interesting facts about Ricky Nelson's demise. I still like his music. So sad that many musicians die in plane crashes. They'd be smarter to all go by bus.

This portion of the DC-3’s tail section and tailwheel assembly was gifted to the museum for display by an unknown donor. Air Salvage of Dallas, the wreckage recovery firm that was contracted in 1986 to remove the wreckage retains the aircraft’s rudder flight control surface.
http://www.lostflights.com/General-Aviation-Archaeology/December-31-1985/i-cL8dCwV

Insisting on using a dangerous plane for ones own travels is one crazy thing but allowing others to ride in it to ? I just don't understand that logic at all. It's not like riding in an old car if it quits you can get out and walk. What was that ? Over inflated ego ?

The co-pilot, Ken Ferguson, said the plane was safe. There's a youtube video of him talking about the fatal flight.