The Bonnie and Clyde Museums

This is Main Street Gibsland, and pretty much all there is to Gibsland.
But for a three day weekend in May the town comes alive for their annual Bonnie and Clyde Festival.  There is a historian's dinner presided over by a Dallas historian who will tell you all you need to know about Bonnie and Clyde ($10), gospel music, a street dance, souvenir t-shirts are for sale, a Lion's Club pancake breakfast, The Bonnie and Clyde Parade with antique cars, shoot outs and bank robberies performed by the famous Public Enemies (I'm not making this up), an ambush reenactment at the ambush site, but best of all is the Bonnie and Clyde Look-alike Contest which I bet would be pretty neat to see.  $50 prize for adults and $25 for kids.
I wonder if anyone ever got fixed up as how they looked after the massacre? 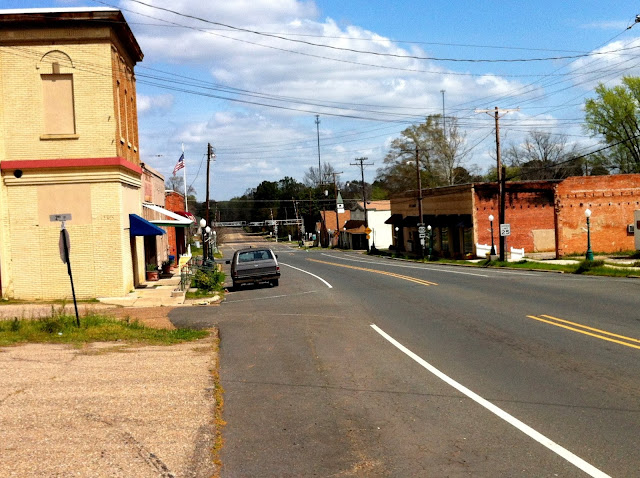 There are two museums competing for your attention dollars.  This guy charges admission, claims he is the grandson of one of the law enforcement officers that shot Bonnie and Clyde, and a bit of a jerk or so I was told.  I can say he saw me peeking through the glass as I was 30 minutes early before the official opening time on Sunday; he turned and walked away into the back somewhere.
I guess he figured I'd be back.  Ha! 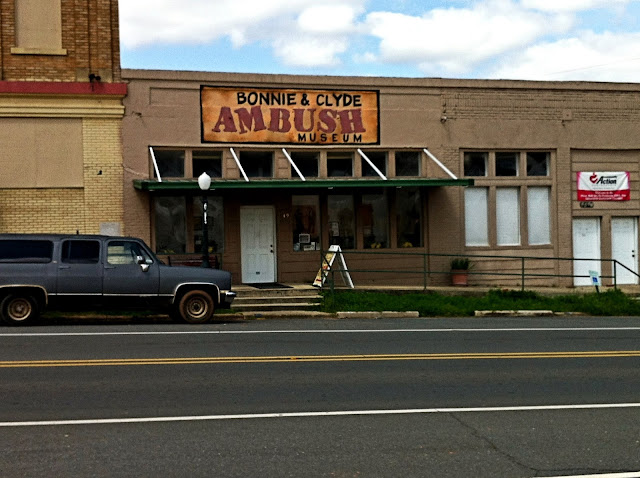 This museum is two doors down and the lady just pulled in as I was about to go off in searching for the ambush site.  She doesn't charge admission (will take donations though), has more than enough to look at keeping you entertained for awhile and was very friendly. 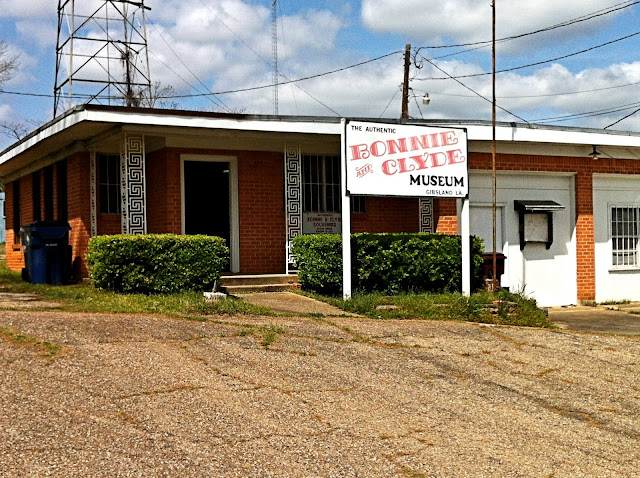 There were lots of pictures, write-ups and newspaper clippings about the pair and the days leading up to their demise.  Oh yeah, the jerk in the first museum will not allow you to bring your camera into his place - "NO Photography Allowed!".  This lady said I could take all the pictures I wished.  Here is the happy couple. 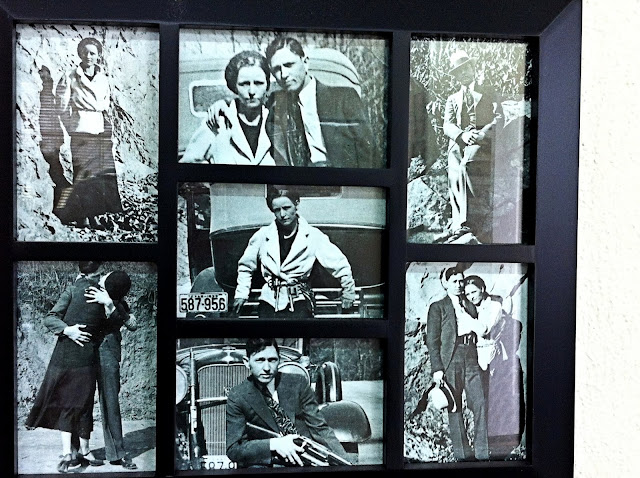 There were other somewhat gruesome black and white photos taken at the time but I'll just share this one for it looks like Bonnie died with a smile on her face.  The "50 bullets apiece" is a bit of an exaggeration but the funeral director did have a problem keeping the embalming fluid from leaking out.  No joke. 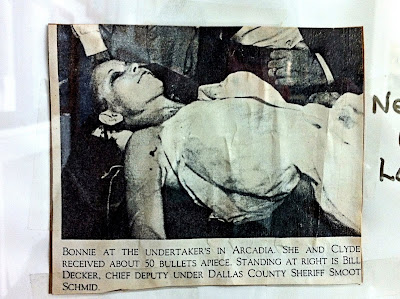 Now back at the ambush site.  Off in the woods behind the stone monument you saw yesterday I came upon this scene.  Yeah, I like to explore and since I couldn't hear any banjo music I felt safe...kind of. 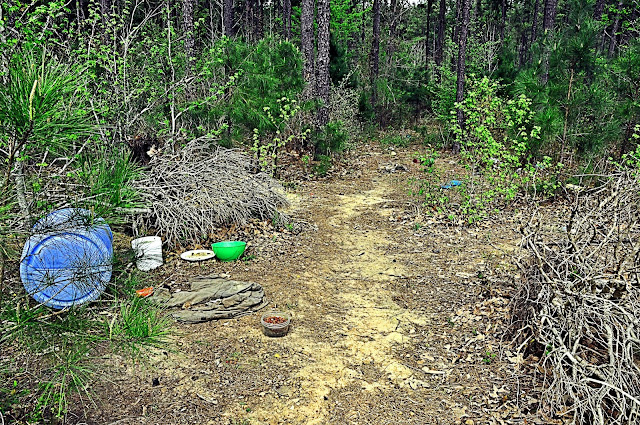 These are bowls freshly filled with what looked like dog meal.  The other bowls had water in them.  I couldn't understand someone driving miles to this spot in the woods to feed feral dogs.  Not because they were dogs, but that dogs roam.  How would one know they were even around to begin with?  I could understand if it were cats as cats hang out in the area and would be seen, but hadn't seen this type of behavior for dogs.  What else could someone be caring for? 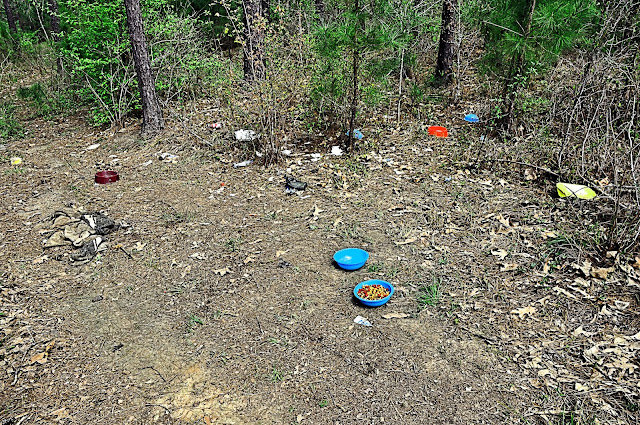 Here is a fresh bale of hay for bedding (?) and the blue barrel on it's side in the first photo had some straw thrown in. 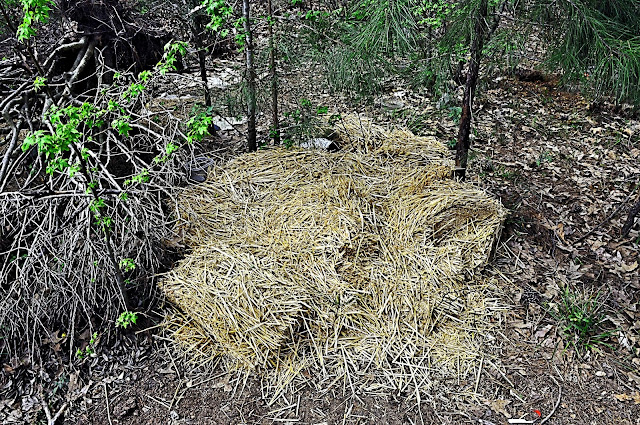 Strange, but then I was in rural Louisiana.

Yes that was a story that even made it to europe. Thanks to the movie. The dogs is another matter . Somebody with regret that he or she once tied a dog up on a tree in the forest and now do penance. Still it is another observation I so like in your stories.

well we might think how certain images would be better not seen in today's media, but there it was all happening way back i.e. Bonnie's photo with the bullet wounds. That was rather weird the dog food and straw ....

That Bonny and Clyde have become icons, but in fact were just ordinary criminals. But it is often going this way, by books or movies the story is romanticized. And a criminal woman was an exception in those days maybe. But I like to read those stories. The food in the wood is mysterious....

I have never seen that picture of Bonnie before. Whatta pair!

i'm thinking feral dogs with pups - they don't roam. i've fed a few in my day that stayed in one area (thelma and louise were dumped on the back road and we rescued them after feeding for several weeks)

Not a state I would care to visit so I do appreciate you sharing these place.

What an interesting blog. I had no idea. And I like your take on adventures. You sure know how to make an adventure out of everyday life.

hey, those two don't look anything like Warren Beatty and Faye Dunaway. what a great post - I really like main street in Gibsland, but I think it might be a bit depressing to live there full-time. I'm curious as to what animal someone was feeding, but bless their hearts for caring and making the attempt. happy weekend to you and Sinbad.

Interesting town. And now I'm really curious about the food and straw.

Hi John...Hahaha...where was NCIS or CSI in those days! Love the embalming story ; )
Looks like I have to check out yesterday's post, this feeding spot just might be for those who believe that Bonnie and Clyde had a dog that is still living, if only in
spirit!! ; )
Grace