Samuel P. Dinsmore as a young man,
fresh out of the Civil War and pictured here when a school teacher in Illinois. 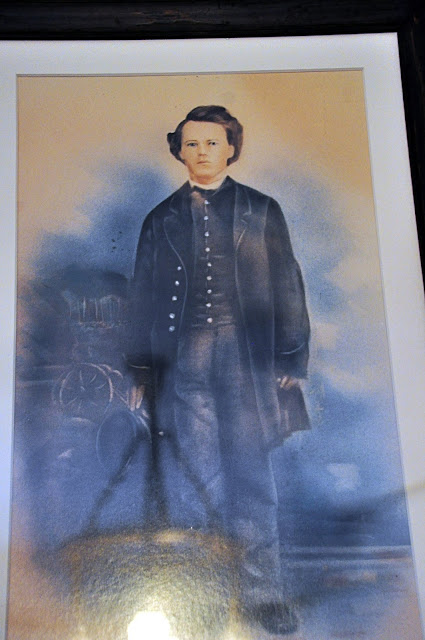 He married on horseback in 1870.  This is a later photo of his wife Frances who died in the spring of 1917.  The other people standing behind must be their children but strangely he makes no mention of them in his little booklet. 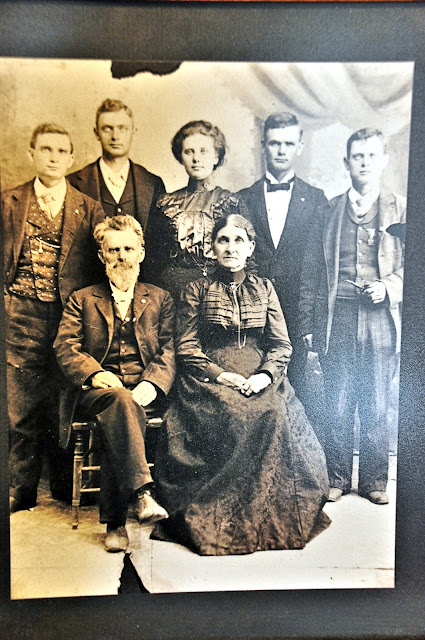 He then married Emilie Brozek of Czechoslovakia in the spring of 1924.
Dinsmore writes:  "This is my present wife.  An old man needs a nurse, a young man wants a companion.  I got both.  And not withstanding the prediction of almost all our acquaintances and visitors who came to see this place that we would not live together a year, we are still living together, and the prospects are that we'll still be together until my wife puts me in the mausoleum.  I was 81 years and she 20 years old when we were married." 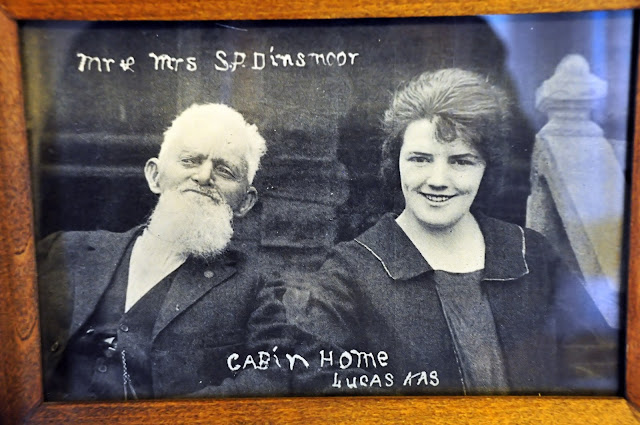 Here is their child, Emily Jane when she was 20 months old.  He does mention her for she is the first child born in his cabin home.  He also goes on to mention how at the same time he had a grandson 17 years of age who just had their first born.  Samuel reckoned that "Lucas has the distinction of having the oldest and youngest father of the same name in the state".  He also says that his grandfather married a second time at the age of 70 and died at 84 leaving behind 4 young, healthy and normal children. 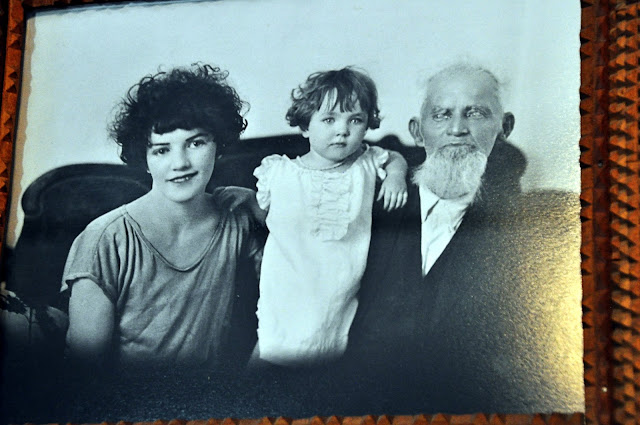 But the old guy wasn't done yet.  Here they are with their second child when Emilie is 27 and Sam 87.  My guide told me that Emilie was not well received in the town of Lucas, most thinking she was a gold digger.  She stayed at the cabin after Sam died for a few years then moved on.  I don't know what became of her after that.  [The comments on this post should be interesting] 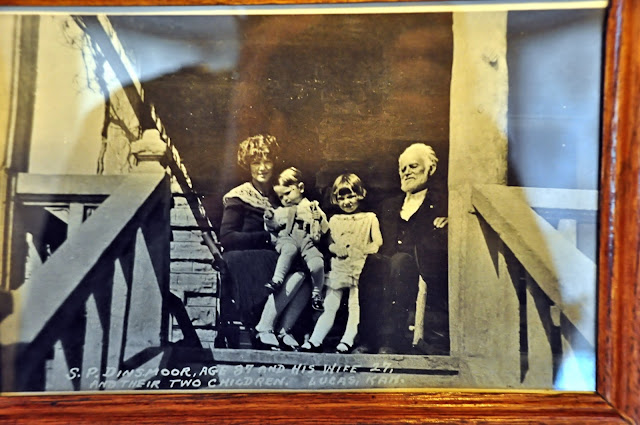 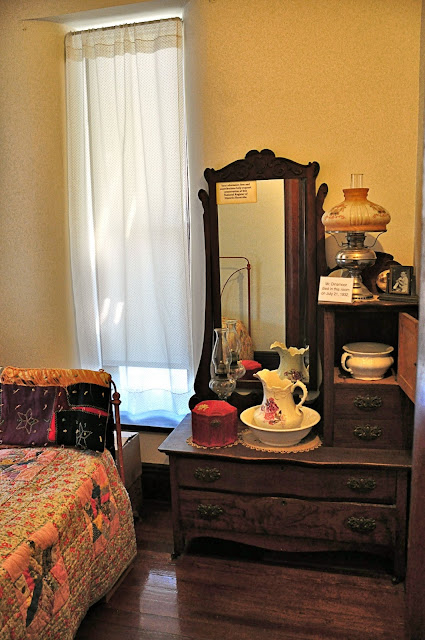 So after seeing all that Dinsmore built during this past week, it probably will not surprise you that he designed and built his own mausoleum on his property, of course entirely of cement.  His intent was to be buried with his first wife Frances.  But when Frances died the town of Lucas would not allow her to be buried anywhere but the town cemetery.  Will that didn't deter Dinsmore none.  He got together a couple of his really good friends.  I've always said good friends will help you move, but really good friends will help you move a body.  And that is just what they did.  They dug Frances up, loaded the coffin on the back of a wagon and boldly drove down Main Street, Lucas and placed her in a steel vault covered with cement (of course) within the mausoleum.  Samuel had planned to be buried above her in a cement tomb with a glass window.

"I have a will that none except my widow, my descendants, their husbands and wives, shall go in to see me for less than a $1.00.  That will pay someone to look after the place, and I promise everyone that comes in to see me (they can look through the plate glass and the glass in the lid of my coffin and see my face) that if I see them dropping a dollar in the hands of the flunky, and I see the dollar, I will give them a smile."


My guide unlocked the mausoleum and took me inside with the promise of no pictures be taken.  Dinsmore studied the act of preservation and embalming and left directions on what was to be done to his body.  The body remained well preserved just as he was the day he died up until 2006.  Then somehow the glass seal broke and air was able to enter the coffin.  Sadly today Sam looks pretty moldy. 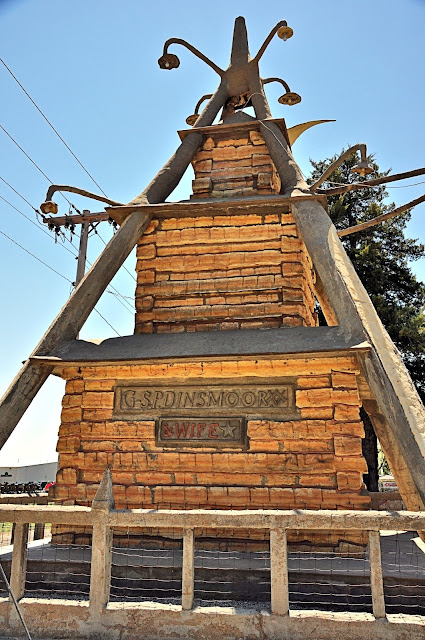 "This is where and the way I expect to go.  I never joke, but if it were not for jokes, life would be dull.  I like a joke.  It seems to me that people buried in iron and wood boxes will be frying and burning up in the resurrection morn.  How will they get out when this world is on fire?  Cement will not stand fire, the glass will break.  This cement lid will fly open and I will sail out like a locust.  Some people know they are going to Heaven and those they do not like are going to Hell.  I am going where the Boss puts me. He knows where I belong better than I do.  If get to go up I have a cement angel outside, above the door, to take me up."


Sam had a two gallon cement jug placed at the foot of his coffin in case he had to go down below.  He planned to "grab his jug and fill it with water on the road down".

And just in case you didn't think Samuel Dinsmore wasn't kooky enough, here is a photo he made of him viewing himself in his coffin.  He accomplished this by doing a double exposure.
This is from a postcard I bought while there. 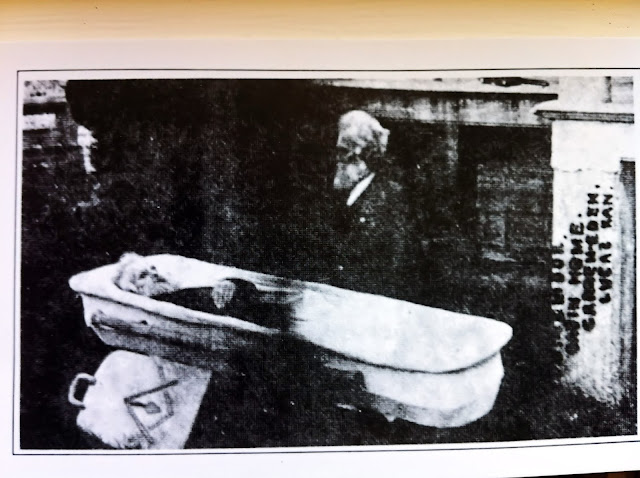 This concludes my presentation of the Garden of Eden in Lucas, Kansas
and its creator Samuel P. Dinsmore.
For a more complete set of much better pictures of this most interesting place click on gallery.