I hadn't planned on going to the Oklahoma City Memorial for two reasons: I usually shy away from driving through big cities with the Little House on the Highway and memorials such as this bother me.  But I figured being so close I'd give it a go.  Driving to the site in the middle of town wasn't bad at all and I found a nice free parking spot on a side street.  I parked, told Sinbad I'd be back soon (he was sleeping anyway) and took off walking.  I knew I was getting close when I came upon this fence.

This is the first fence erected to protect the site and has become a place for people to leave tokens of remembrance for the victims of the terrorist bombing on April 19, 1995.  To date they have numbered over 60,000 of which many have been preserved in the archives of the museum. 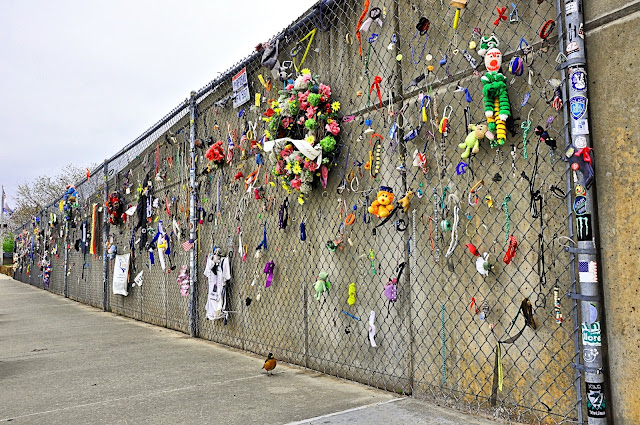 This wall has a brick missing for each of the 168 people who died that morning. 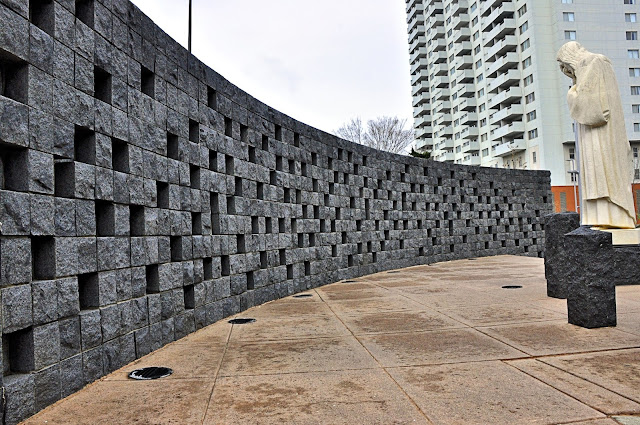 The reflecting pool has a monumental gate at each end marking the formal entrance to the Memorial.  The east gate has inscribed 9:01 representing the innocence of the city before the attack.  The west gate 9:03, the moment we were changed forever. 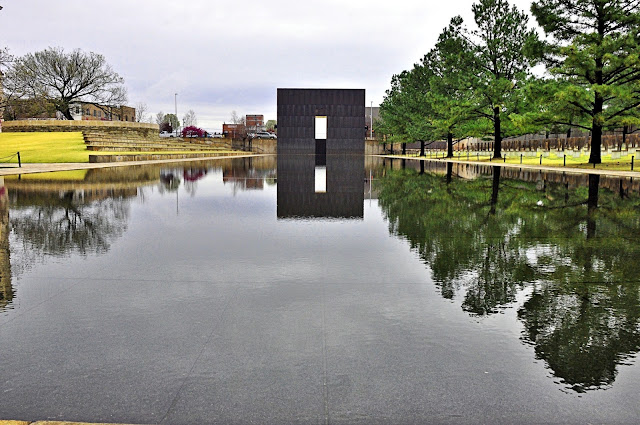 I took the photo on the wrong side of each gate not knowing at the time what the numbers on the other sides meant. 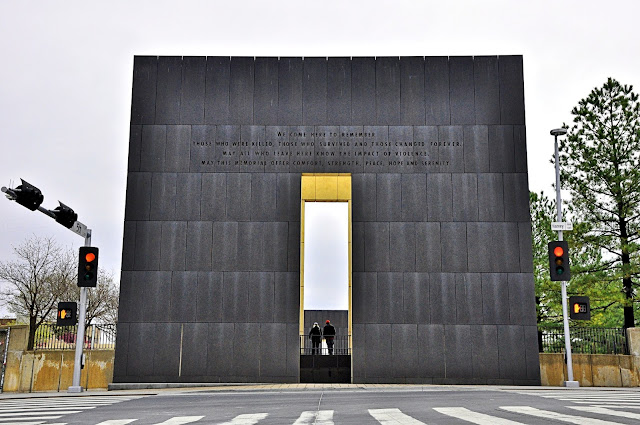 The Field of Empty Chairs, 168 of them, one for each life lost.  They are arranged in nine rows, one for each floor of the Federal Building and placed accordingly to the floor which those killed were working or visiting.  Each bronze and stone chair rests on a glass base with the name of a victim.  There were 19 smaller chairs for the 19 children killed. 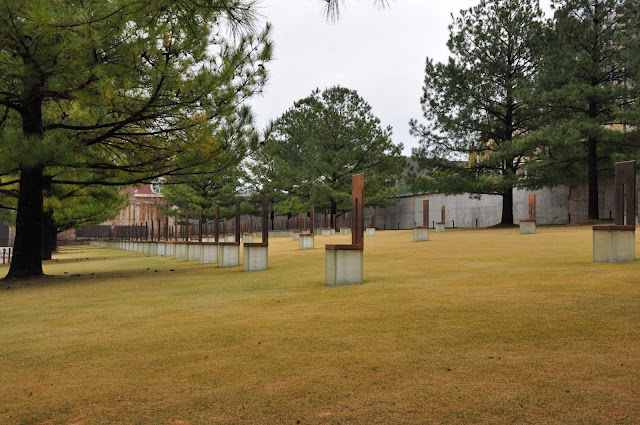 This is the Survivor Tree, a 90+year old American Elm that stood in the middle of the asphalt parking lot and somehow survived the horrific blast of that morning.  It now stands as a profound symbol of human resilience. 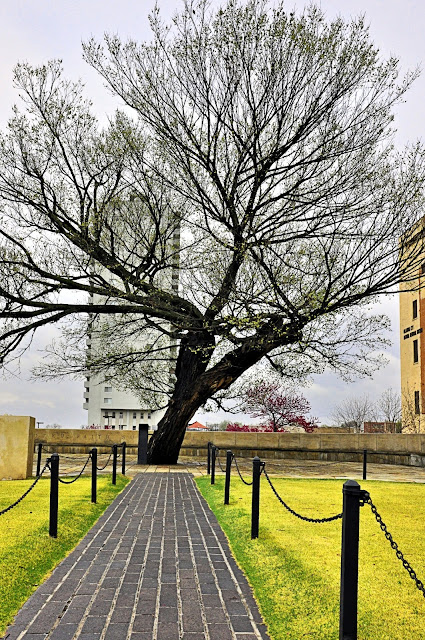 I then went inside the museum, stood at the counter to pay my admission and glanced inside where I saw a huge semi circular wall lined with large glass cubicles.  Inside each cube was an 8x10 photo, smaller photos and personal artifacts family members have displayed in remembrance for their lost loved ones.  Three children looked out at me from the first row.  Two were barely a year old if that, the third a cute black preschooler girl with a happy smile on her face.  I couldn't deal with it and turned to go leaving the museum behind.

It is a very impressive memorial, so touching with all the empty chairs. I do remember the bombing attack very well. It is interesting the tree survived. We have a simular tree in Amsterdam that survived an airplane crash. It is called the "Tree which saw everything" and part of the memorial too.

I must admit that you have some very good memorial makers. Somebody must have designed these memorials but you seldom know who. About the feeling it is to much. It sometimes just happens and you can't cope anymore. I had it when i visited a former concentrationcamp in the netherlands from worldwar II called westerbork.

wonderful monuments; though it is tragic they have to be. I would be with you re viewing further into this though; it wreaks at your heart and soul, sending shockwaves through your emotions.

Even though they are very sad, I feel these memorials are very important and thank you for showing us much of this one. My memory is of a beautiful red headed young mom who had just lost her two sons in the building's daycare and she said something like 'I don't know who I am now. Am I still a mother?' I can weep at that thought whenever it comes. (This was a TV interview)

i completely understand. just looking at this post fills my heart with such sadness. we humans can exact such horror on one another, impacting other lives forever.

We are living in mean times...but if you look at history- we really always have. My heart just breaks thinking of the lives changed and for what reason that makes any sense I will never know.

Remarkable set of structure. The tree is really thought provoking.

The terrible things in life need remembered as well as the good things. I'd like to think it increases the chances of it not happening again - we can but hope. A simple monument that speaks very much for itself.