Our Lady of Peace Shrine

As you travel east or west on Interstate 80 and approach the border of Nebraska and Wyoming, you cannot help but notice this 30 foot stall sculpture just to the north.  Ted and Marjorie Trefren of Cheyenne Wyoming talked about erecting a Marian Shrine in Wyoming for many years.  So they traveled the world and visited other shrines to get an idea as to how to go about this.  They began with a life-sized clay sculpture which was treated with a resilient rubber coating.  This rubber mold was used to cast a lightweight statue which was then cut up into five pieces and sent to Petaluma, Calif. (that's right nextdoor to me!) to be scaled up.  Laser measurements were fed into a computer which then cut up Styrofoam into hundreds of pieces.  These pieces were later assembled into a 30 foot stall statue.  Now the thing weighs 180 tons but my brochure doesn't say what they covered the Styrofoam with!  It can't be 180 tons of bare foam standing there in the weather! 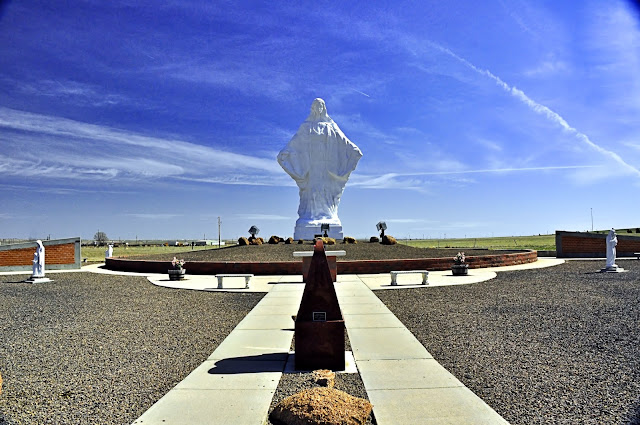 Then here, as a fund raising project to maintain the shrine, you too can purchase a personalized brick for the wall.  Now I'll confess, I stood there for awhile wondering how they got these bricks into the wall, one at a time, as people made their donations. 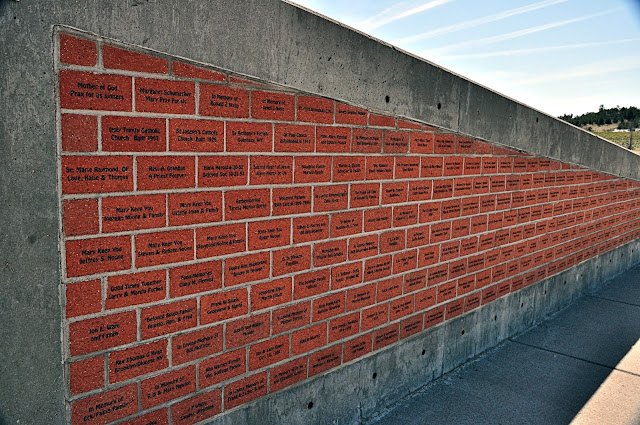 Then I walked around in back. 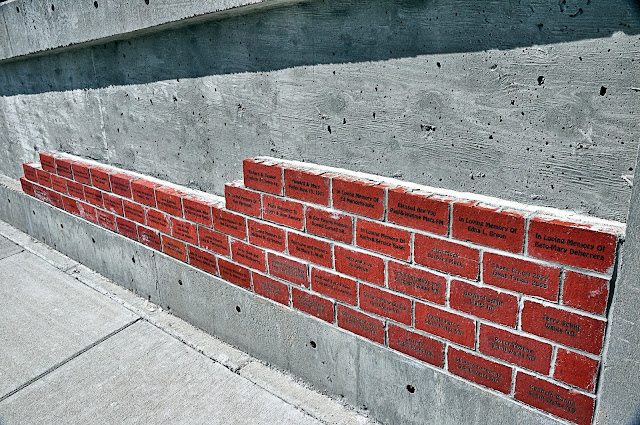 There were a lot of other religious sculptures about that you could admire, contemplate, say a few words over while the incessant noise of Interstate traffic roared on nearby.  I liked the God's Ten Commandments the best.  It brought back memories of my grandmother taking me to the theater to see Cecil B. DeMiles epic film about Moses and the Commandments.  That movie bothered me.  God went through all that trouble carving those Commandments into stone, and they lasted only long enough for Moses to climb down from the mountain where he smashed them to smithereens.  I wan't upset with Edward G. Robinson for upsetting Charlton Heston as much as I was with Charlton Heston losing his temper.  We could still have those tablets today if Moses didn't have some anger management issues.  Ah but then, many years later came Indiana Jones to put everything to right again.  Imagine my disappointment once again, when the Ark of the Covenant was at last opened at the end of the movie. 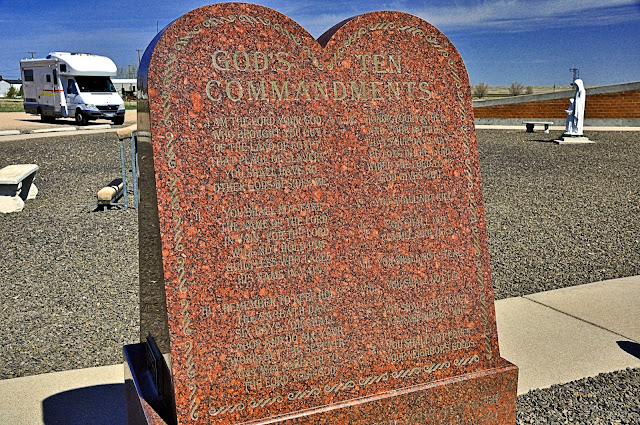 One nice discovery after the other. Great round trip.

If God had put the ten commandments onto granite in the first place, they'd have been less likely to break.

I wouldn't like to put to much money on the longevity of a 30 foot polystyrene statue. Laser cut by a computer - oh dear!! I suppose the dimensions are on a hard drive somewhere if they want to make a new one.

I am always surprised to see people make such efforts for a religion. It always has to be something big to worship. In each country you visit, there are huge cathedrals, mosques, temples or statues on the top of a mountain. People better look inside themselves to be a good person.

Jewelers make jewelry using what is called the "lost sand technique", perhaps this is how the made the statue. Your description sounds like the beginning of the technique.

quite the large undertaking!

What a lot of work! I'm glad you checked out the back to see how they added the bricks.