The Crucifixion of Labor


As you worked your way around Samuel Dinsmoor's property from right to left he brings you to the present where he expressed his outlook on life and politics.  I failed to get some pictures of these pieces for the themes were lost to me at the time until later when the young lady leading me on the tour explained them to me.  I did have this one in the camera though.

"I believe Labor has been crucified between a thousand grafters ever since Labor begun, but I could not put them all up, so I have put up the leaders - Lawyer, Doctor, Preacher and Banker.   I do not say they are all grafters, but I do say they are the leaders of all who eat cake by the sweat of the other fellow's face.  The Lawyer interprets the law.  The Doctor has his knife and saw ready to carve up the bones.  The Preacher is saying to this poor fellow crucified, "Never mind your suffering here on earth, my friend, never mind your suffering here, secure home in Heaven for all eternity and you'll be all right."  This is the stuff he is giving labor for his cake.  He knows nothing about Eternity and that he does know if he knows anything.  What fools we be to sweat to give the other fellow cake.  The Banker has the money, takes the interest and breaks up more people than any other class." 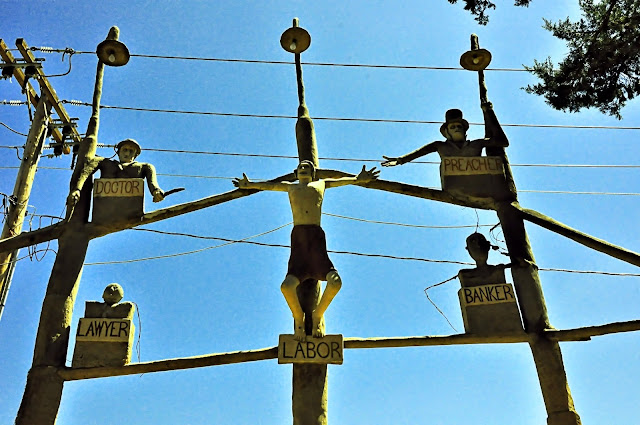 Nice lesson with some truth in it.

My Dad would have understood every word of that.

Dr. Adrian Rogers Quote
"You cannot legislate the poor into freedom by legislating the wealthy out of freedom. What one person receives without working for, another person must work for without receiving. The government cannot give to anybody anything that the government does not first take from somebody else. When half of the people get the idea that they do not have to work because the other half is going to take care of them, and when the other half gets the idea that it does no good to work because somebody else is going to get what they work for, that my dear friend, is the end of any nation. You cannot multiply wealth by dividing it."

wow! that is some heavy stuff!

The banker seems to give it a bit of a modern feel - do think he'd had a wee glance in his crystal ball.

I fear there's a lot of truth in this!