The Garden of Eden

Yesterday in celebration of our country's birth date I posted a picture of a concrete flag (which I failed to mention measures 4x7 feet and is ball bearing balanced to actually flow with the Kansas winds) from the Garden of Eden.  I've been dragging my feet on presenting this site as there was so much to see and I just didn't know how to go about presenting it.  I finally decided to show it a little at a time and describe things mostly in the words of the artist himself.

Before I get started, I have to say this site was on my list of things to see in my tour of the Midwest last fall.  Well, while in Kansas I sort of blew off the idea of going as the name "Garden of Eden" didn't motivate me that much.  This year on our slow return trip back home after visiting the Southern states, I decided to go check out Lucas Kansas and see what was there.  Pulling up early that morning I was presented with this sight. 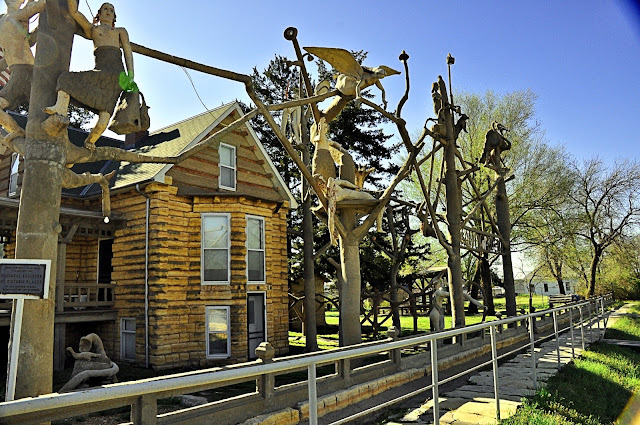 My first thought was this is just another one of the kooky eccentric artists
like many other places I have visited. 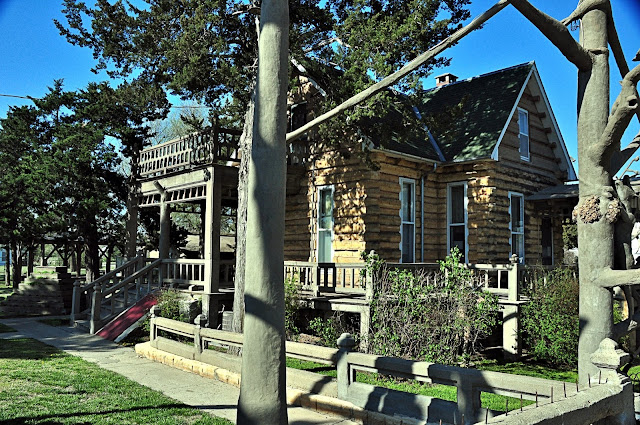 I went inside and met the young lady who said she was the great niece (I believe that was what she said) of Samuel P. Dinsmore whose home and gardens this once belonged to.  As I was the only one there I was treated to a personalized tour.  The more she told me about Mr. Dinsmore, the more I liked this guy, a gentleman I would have dearly liked to have known. 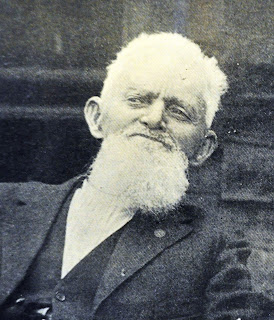 As we walked the grounds she explained to me the symbolism behind his sculptures which only then became clear to me and made a lot of sense.  Dinsmore served in the Civil War for three years, survived 18 big battles and numerous skirmishes; saw the capture of General Lee; taught school in Illinois for 5 years, and then moved to Lucas, Kansas in 1888.  There he began work on his home and the Garden of Eden which continued for the remainder of his life. 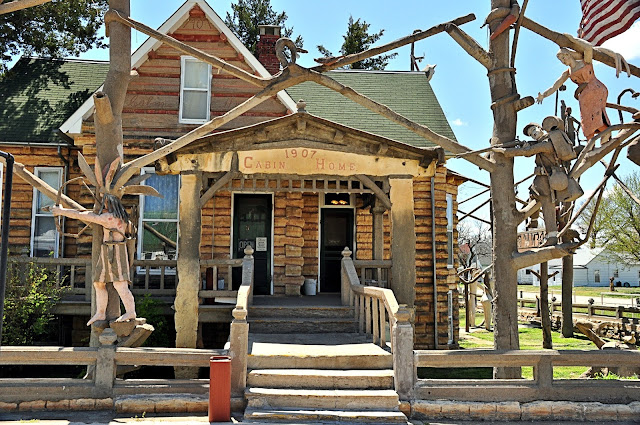 The house is built of post rock which is common in the area (a subject of a previous post) in the style of a log cabin with all the rock notched to fit together at the ends just like traditional wood log cabins.  But we will start our tour with the "Garden" first which by 1927 comprised of over 113 tons of concrete (equivalent to 2,273 sacks of cement) a secret mixture which he developed and never revealed to anyone and was never written down in any of his notes or journals.  Several times he was offered huge amounts of money for his recipe of this most durable concrete but never sold out and will remain a secret forever.

how very interesting that 'post rock' technique! An intruiging place to visit, look forward to further posts on this one John

By the word Eden I think about John Steinbeck with all his figures and also on his travels with Charlie. Not uncommon with your travels with Sinbad. How well fit Samuel P. Dinsmore in both stories. Thanks for showing us.

Sometimes I think the late 1800s would have been the best time to have lived. People were smarter.

This is so nice to see and read. I like those people who live their own dream, built a house, make art. That must be so wonderful to live for. I like the story about his recipe he took with him in his grave.

These were done in days before zoning laws, and people could just let their creativity flow. They built dwellings out of glass bottles, tin cans, or whatever else tickled them. Not all beautiful like the Dinsmore house, but all creative.

Awesome post! New England will be waiting for you!

I would take the cabin but not the artwork.

This man saw a lot and finally turned inward to follow his imagination. Eccentric and inventive. Bet he used some version of the Roman formula for concrete.