The Gates of Eden

"Here are storks.  Moses never said a word about them.  He just wrote up enough to bring down the fall of man.  There must have been many things in the Garden of Eden that Moses didn't mention.  I have substituted some things that I know were there.  The storks were there because the kids were there: Cain and Abel.  The storks always bring the kids.  Nowadays they bring them in baskets in their mouths, but the Bible says, "There was darkness on the face of the earth," and these storks had to have lights in their mouths to see which way to go, so they carried the babies under their wings.  There are three little faces sticking out. " (I'm not sure if you can make out the little faces under the wings.  All my pictures were taken before I understood the symbolism in his work so some items Dinsmore mentions are not visible in my pictures) 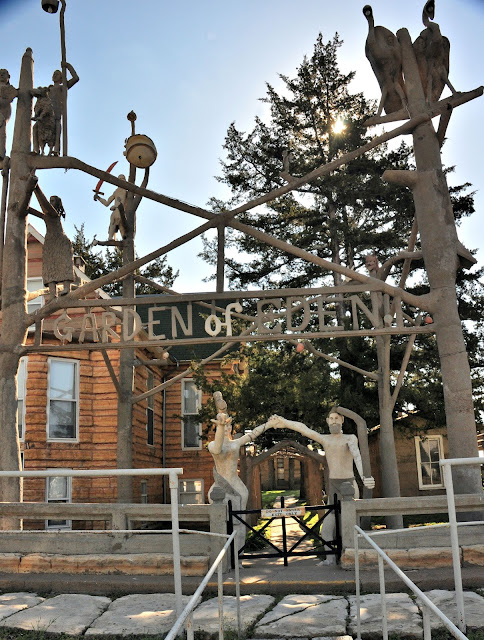 "Two snakes form the grape arbor.  One is giving Eve the apple.  The Bible tells all about that.  The other snake didn't have an apple and Adam got all hot about that, he grabbed it, and is smashing its head with his heel.  That shows the disposition of man.  If he doesn't get the apple there is something doing.  And the Bible says, the heel of the seed of the woman shall smash the serpent's head, or something like that." 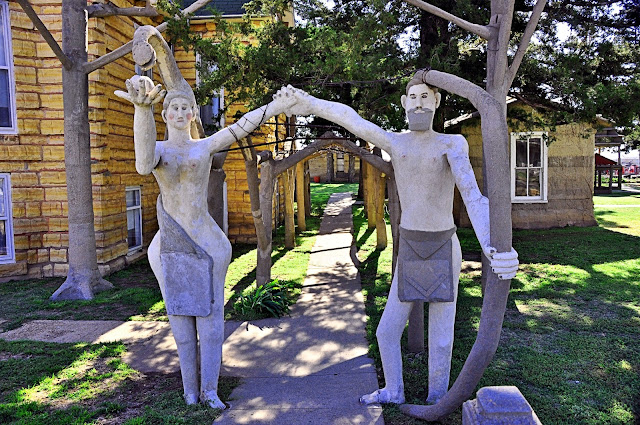 "Now this is the tree of life.  The angel is guarding the apples so we can't live forever (not visible in this photo but the first photo yes, above the letter D)  That is tough, but it is according to Moses.  There are four kids in the tree.  Moses never said a word about girls, but he did tell about the boys (Cain and Abel) making their offering, and you know and everybody knows that girls are always hanging around boys, so I put them up, one in a swing and the other catching a bird.  Moses said that Cain was a tiller of soil and he raised great big pumpkins.  He is offering a pumpkin but he is trying to hide the hole in the pumpkin with his foot.  You see it is a rotten pumpkin.  The Lord didn't like rotten pumpkins.  I don't blame him.   Abel is a shepherd and he raised sheep.  He is offering a dandy little buck-merino.  The Lord liked good mutton." 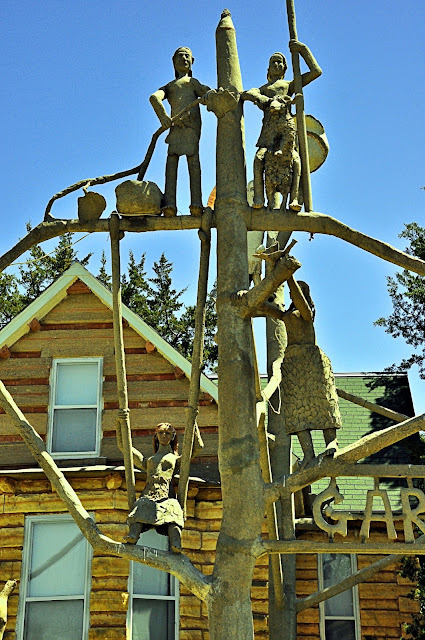 "Now this made Cain mad at Abel because Abel's good mutton was more acceptable to God than his old rotten pumpkin and he killed him.  He couldn't have killed him with a gun; they didn't have any such implement of warfare those times, but Cain was a tiller of soil.  He must have had a hoe to till the soil.  I just imagine he got Abel out in the 'tater patch and brained him with his hoe and laid him out on this platform.  Poor Abel is dead and the angel is coming down after him.  That is the way they used to bury the dead.  Nowadays, we tote them off to the boneyard.  Times have changed since Moses's day." 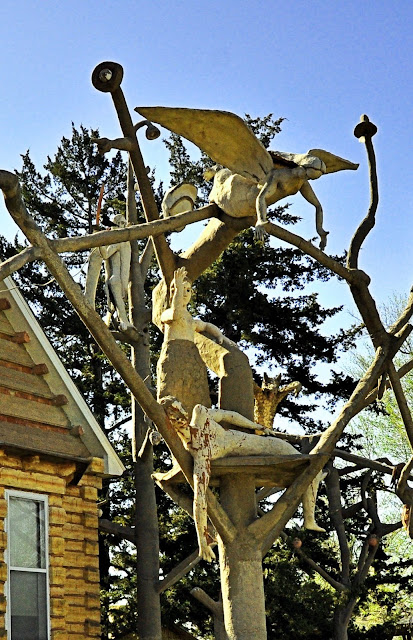 This is a lesson in reading between the lines.

It is full of symbolism, I am not familiar with, but I like the way he has made it all.

That certainly is a fascinating place - you've seen your share of kooky gardens, they make great viewing but I think I could just about live with this one.

Not my cup of tea.

Quoting the man is like hearing him narrate his work. An original voice and vision.

What a funny guy he must have been...