One of the blogs I follow is Carole at Snap Happy Birding.  She comes up with some of the finest bird photos simply by using her Sony Cyber-shot HX300 which has a 50x optical zoom and 100x digital zoom.  This is a single lens camera.  My little Canon Powershot point & click has 14x optical zoom and 4x digital, so it pales in comparison but the point of this post is that her photos prompted me to start using my little camera once again for more than just movie making.

Here is a scene in my Annadel State Park.  This is at the camera's wide angle and I should have zoomed in a tad to show it as the eye sees it.  Anyway, there is a mountain biker across the valley.  Carole can put little arrows or circles on her photos to point it out but I don't know how. 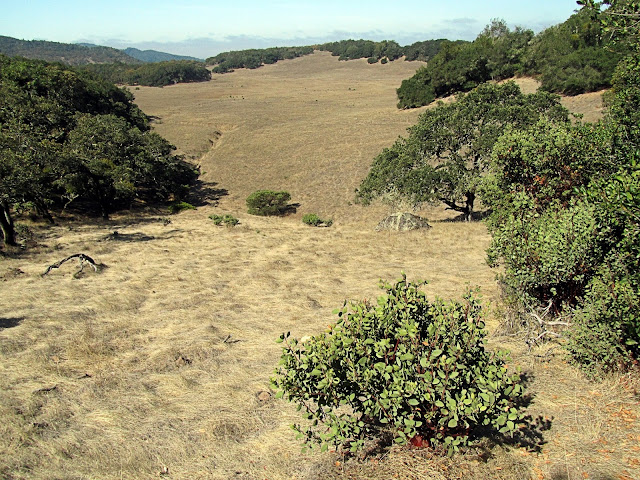 Here he is zoomed in to the max on optical zoom. 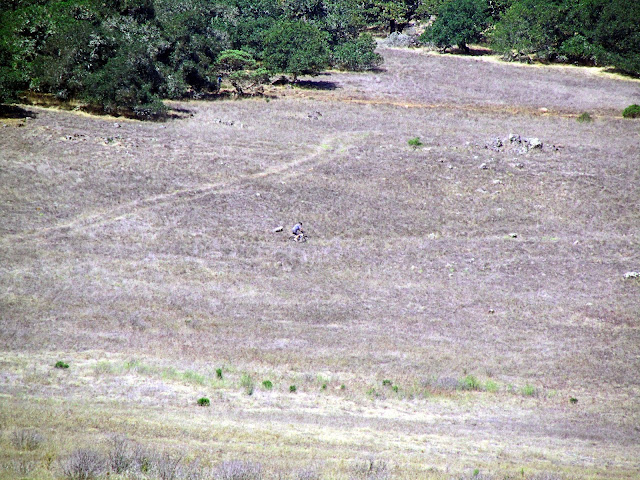 When you go into the digital zoom mode the quality of the picture deteriorates.
Not with Carole's camera though.
At any rate, it's fairly impressive for a little point & click camera. 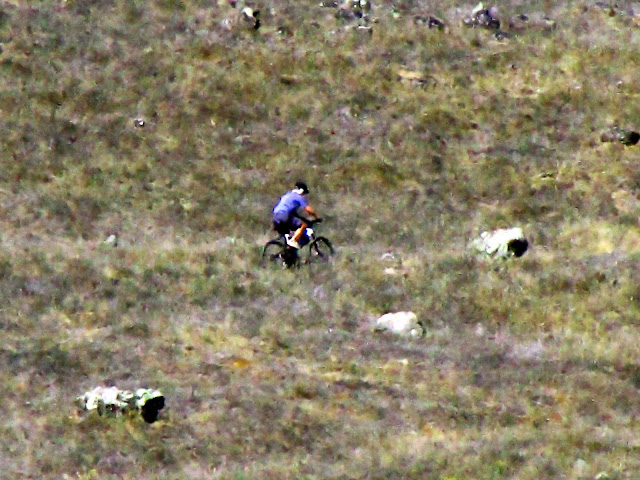 By the lake I made some adjustments to the camera plus had the realization that I should have brought the monopod along as I do when making video instead of taking these pictures hand-held.  Carole by the way doesn't use any tripod or monopod.  That woman has hands so steady she could defuse a bomb or do brain surgery.  I've mentioned this to her.

Anyway, here is the scene zoomed in a bit so it is represented as the eye sees it.
There is a guy floating out there fishing by the opposite shoreline. 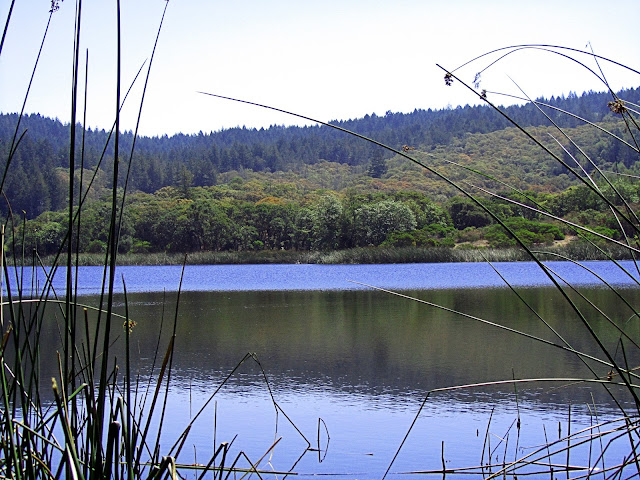 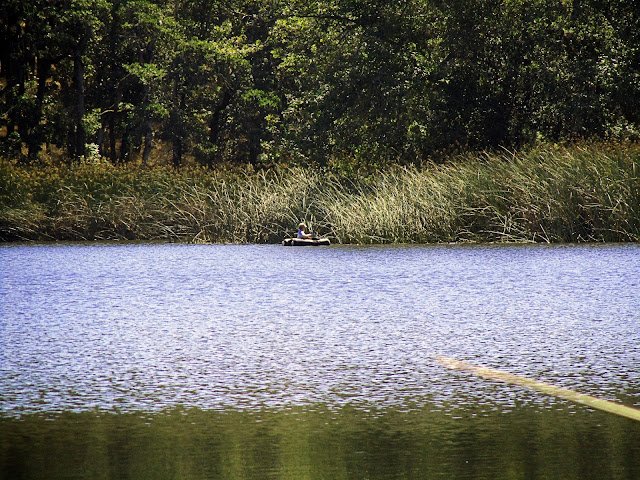 And maxed out in the digital zoom range.  The adjustments seemed to have helped but having Carole's steady hands would have made this better. 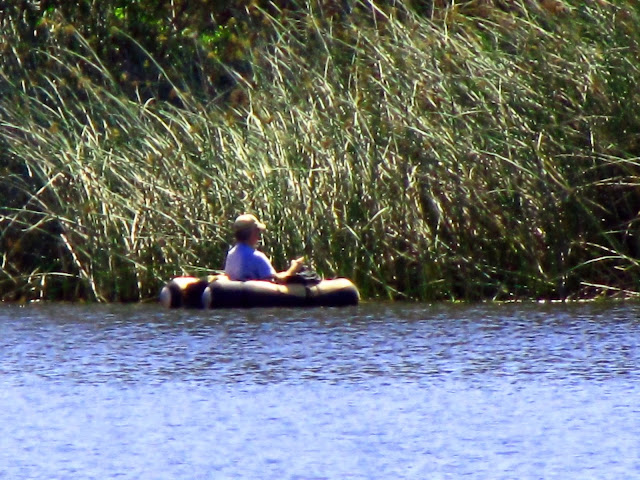 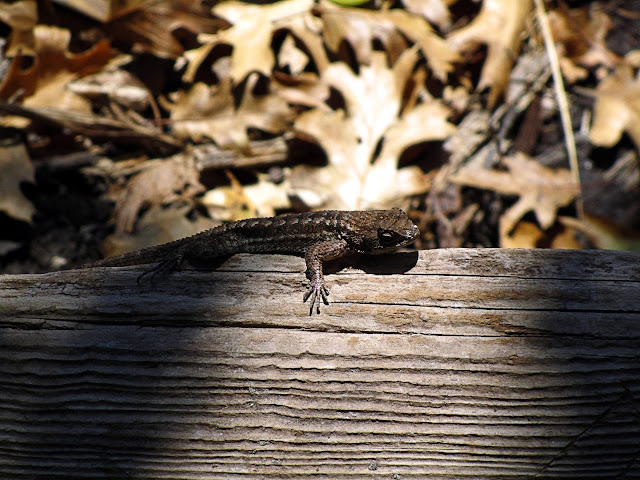 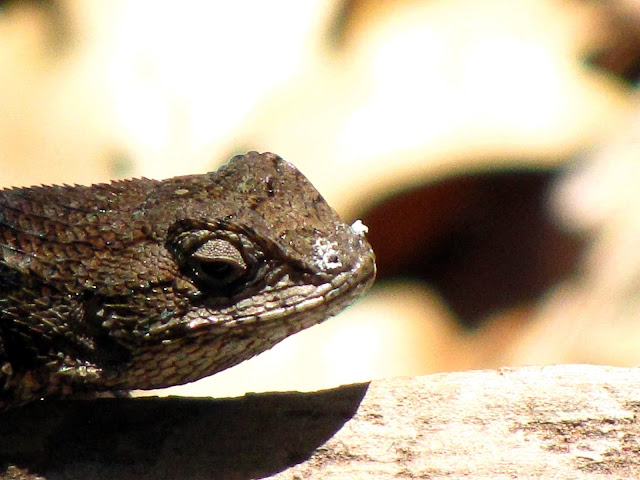 I discovered a few other features this camera had which I never used before that day.
Gee whilikers I didn't know it did that!
How long have it had this camera?  I'm not saying but it wouldn't do me any good to get a more modern one lens camera as I don't read manuals and only learn all that the camera can do years later.

This is the last post for awhile.  We will be well along on our road trip by the time you read this, unless you live in Australia or Europe.  I'll make posts as I can find Internet but being in the high desert of Oregon I am not expecting much so perhaps you shouldn't either.

ahaha ... you made me laugh John. I'm glad my pics with a fairly recent camera purchase, has got you thinking and playing again with your point and shoot too. Amazing really; you probably surprised yourself with that finale' photograph - full on digital zoom and it's a fantastic shot. I'm still learning myself; only today I kind of 'got it' what the digital-zoom really meant. I gather it means cropping basically in-camera! I've been erring on the side of caution more and staying inside the x50 optical, or if I have more time to play with a certain bird I'll give it a shot with some digital zoom added. Have a great road-trip!

carol does get some amazing shots with her zoom and steady hands! i wholeheartedly agree!

good luck on the road!

I finally just figured out how to schedule posts ahead of time. After doing the scheduling part you have to hit "publish" which made no sense to me before because publish means publish, right? I prefer sitting down and doing four at once. I'm still working with my Canon SX50 which can do quite a lot, but it really isn't as good as my DSLR which I"m leaving to pick up now from sending out to be cleaned. Sometimes it's worth dragging the extra stuff around, sometimes it's not.

Great shots. I probably would have missed the biker.

The little point and shoots are great these days - sometimes I think I carry around a DSLR just because it makes me look like I know what I'm doing!!

The final shot of the biker looks like water colour.

Nice demonstration of what digital camera's are capable off. I like specially the photo's of the lizard. I hope your new road trip may be just so interesting as your previous one.

Well you had a good practice with your camera, I should do that too once... Have a nice safe trip with lots of photos and stories.

Enjoy your new adventure and have a safe journey John! ;-)

Digital zooms are getting better and better.