I've been searching in my Annadel State Park for over four years now and finally saw a bobcat!

I had just concluded my mountain bike ride, had come down the long fire road at the end and pulled up to the horse watering trough to fiddle with my bike computer and see how far I had went.  A lady was standing there with her mountain bike.  After a moment or so she said to me "Are you here to see the bobcat too?"

"Right there in front of us in the shadows.  See the long tree lying down..." and she proceeded to put me on the cat.  It was less 40 feet from us crouched down in the grass and brush with not a care in the world as to us or the other people passing by.  In the shade it looked like a grey rock, perfectly camouflaged.  All I had with me was my little point and click and trying to see in that LCD screen a dark image, well all I could do was point in the general direction and hope for the best. 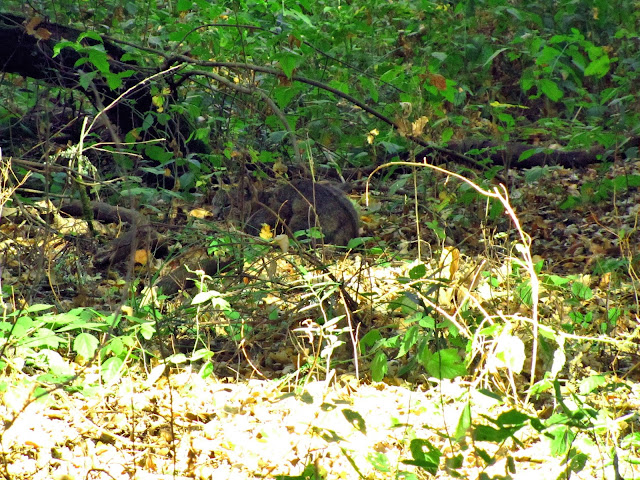 I told the lady my story while we watched the cat.  How I've been waiting all this time to see one, where others I meet on the trails have seen them, and how many times I've heard  “Oh you should have been here a minute ago”.  And even my running friend’s recent sighting of a mountain lion. 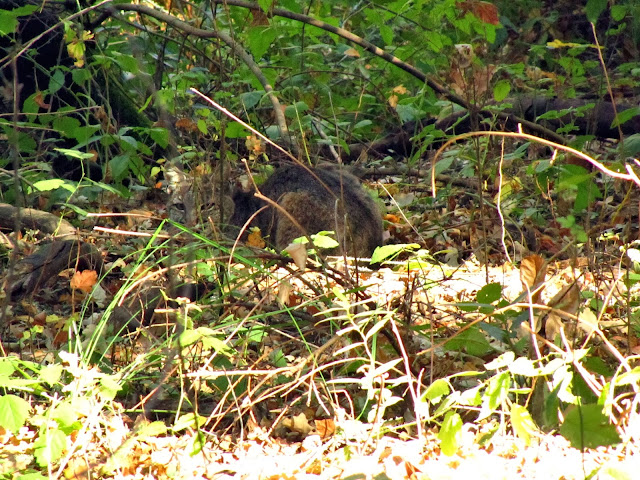 Just after the below photo she got up and walked off into some denser brush.  It is in this general area I have had people tell me of seeing a cat so I suspect this is her territory.  It made both of us wonder how many times we have been by this water trough with the cat right there, perfectly hidden, watching us. 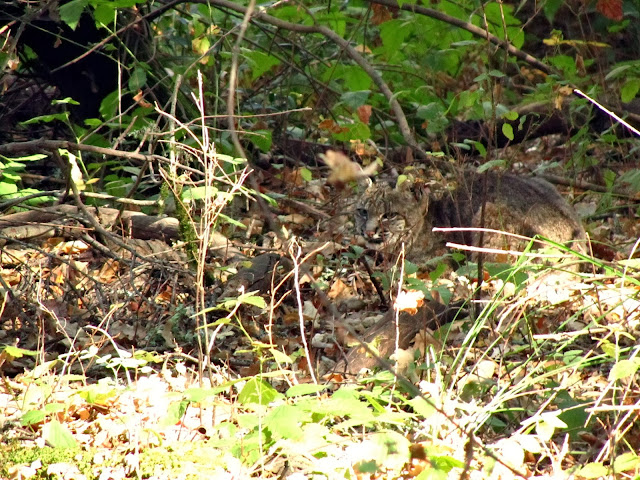 We introduced ourselves and Kim asked me if I would help her put her bike up on the bike rack of her car and went on to explain that she has muscular dystrophy and it is difficult for her to do.  It was only when at her car did I notice that her mountain bike had a battery pack on it wired to an internal motor within the hub of the rear wheel.  The battery motor assists her on the up hills and she then flips a switch on the controller mounted to her handlebar for the down hills where coasting along helps recharge the battery.  Amazing!  Her bike was quality made full suspension Santa Cruz mountain bike that she had specially adapted for her needs.  She said she found a man in Colorado with the same affliction who had converted a mountain bike for a battery assist which encouraged her to do likewise.  I wish I had taken a picture of her mountain bike but I was still recovering from bobcat fever.  But I am sure we will meet again as she’s out there on the trails of Annadel every week she told me.  I admire this woman not letting her condition keep her from doing what she loves.

"Thank you Kim for the bobcat".

I expected the bob cat would be cool (what a gazE!!!) but that lady was co-star indeed!

well that was a well-rounded win-win outing; well done both of you, well all of you including the elusive bob-cat John

Great story. Nice that you finally has seen a bobcat. When we were in the rocky's we met all day people who told us have you seen that bear or that moose but we never saw one until the last week of our stay. Yes then a moose and a black bear. A great experience. Electric bikes are now available in every bike shop in Holland. Its a booming business with people getting older all the time. Great that a lady is going on such trails. Must give her much satisfaction.

Splendid post - and the Bobcat is only one part of what I liked!

Oh this is amazing you finally saw a bobcat! I had to look very good to see him and I can imagen you missed him all the time. It is great he is so quiet lying there with people passing by. He must feel very comfortable there.

Bobcats, wow,...I'm so jealous, I've never seen one in the wild before. Love the shot showing his face. And your new friend is inspiring. What a great day you had, thanks for sharing it! Enjoy your day...

A terrific day of discovery, John. I am glad you ran into Kim and could have the bobcat pointed out to you. That last photo is great.

awesome! for both of you. glad you were able to see AND capture pics of the bobcat and thank you for sharing an inspiring woman with us.

The second picture startled me, as she was looking at you face on. You're lucky she wasn't hungry. I hear too many horror stories of bob cats and mountain lions in the canyons of California. *shudders* But that bike? That sounds fantastic!

A wonderful day all around!

Great photos. I'm glad you have the one where it looks like a rock so we can appreciate the camouflage and your discovery. Very cool!
Kim must be a very determined person. I'm glad she found someone to adapt her bike so she can continue her adventures in nature.

WOO-HOO and HOOP-D-DO!!! You did it. Don’t you have a wonderful feeling of satisfaction? The void in your life has now been filled thanks to you new friend, Kim. Loved the story of her mountain bike and her perseverance against all odds. We go as long as we can go. That is my mantra. I cannot imagine her doing this with MD. Remarkable.

It was probably Sinbad in a Bobcat suit. He didn't want to have to make a return trip.

Wonderful! My hubby's friends send him pics of bobcats they have seen. His cousin has sent pics from somewhere near the powerplant...but I have only ever seen one, at night, running across the road. Years and Years ago.

I would have been shaking with excitement if I had been you.

Fabulous! There are bobcats in the forests of my childhood--they'd steal our chickens. For being such fierce hunters, they sure beautiful!

What a great day! So cool to see one in the woods, and good eye to whoever saw it so camo'd in there. Some people use battery-powered bikes to commute to work in the city. Biking home last week I got passed by a guy on a mountain bike who was moving faster than Lance Armstrong. It was only when I caught up to him at a light that I saw his advantage....

I'm glad we finally got to see the face, up 'til then I wasn't sure. Very cool sighting and story.

Hi John.... Playing some catch up and the Bobcat one post was and eye catcher!! Glad you got to see one, and get some shot's of it!!
Nice to meet people who have that kind of drive to keep going whatever it takes !!

I have seen many Bobcat's and Canadian Lynx having lived in rural Northern Maine since I was born!!
Always sent a chill up my spine!!