Monday Mural - The Really Big One

This mural was the last one I found that afternoon in Dothan, Alabama.  All the murals in this town lie in the downtown area and are within walking distance to each other.  One can go from building to building, block to block and keep finding more murals every time you turn around.  I tried to research as to how many murals there are and came up with 16 or 17 "Wiregrass Murals" described on the town's websites, which by the way it appears I missed two.  Yet I've shown other murals I found in town so I guess they are unofficial ones and the exact number is unknown, at least to me.

This one here though was the most massive at 222 feet long.  Here it is looking from left to right.  If I can remember correctly I could not get back far enough to get it in it's entirety as the building across the way was too close.  You can see the shadow of that building and a railing in the second photo.  For the third photo I was able to get back behind that building down into the vacant lot for the picture.  Nevertheless, can you believe my good fortune in having only two cars in the way and that they were at the far end? 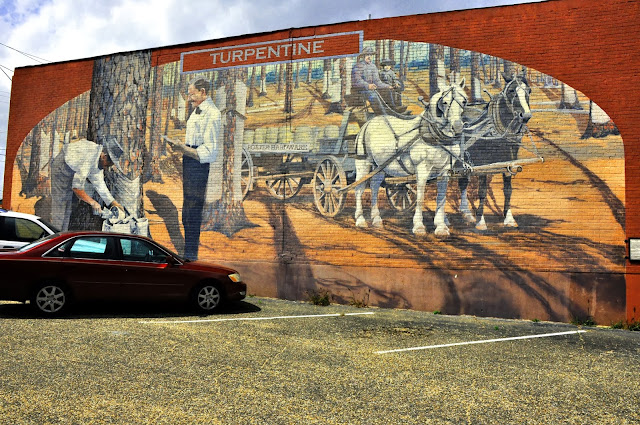 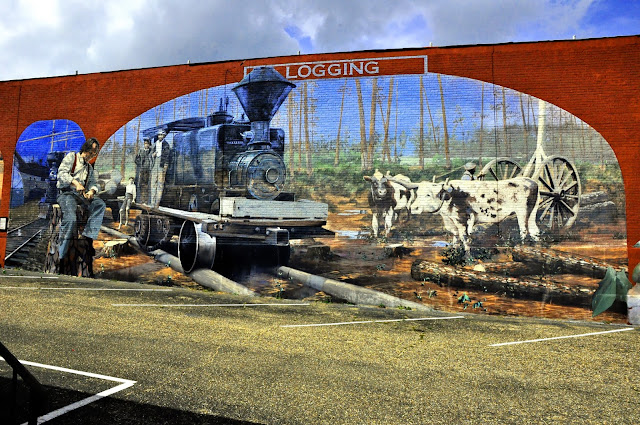 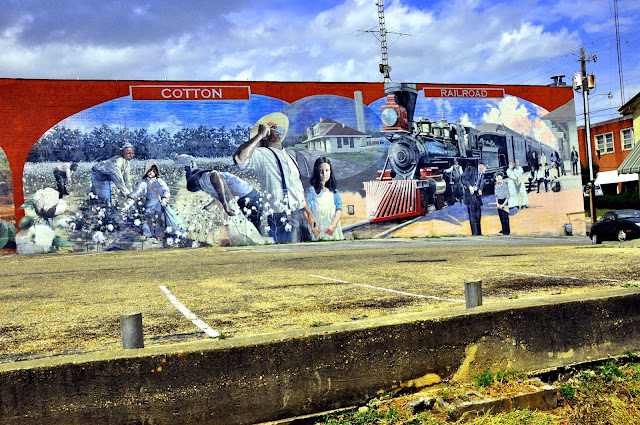 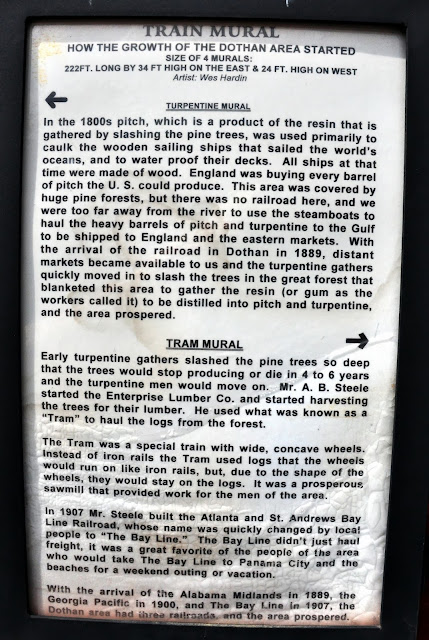 By now it was a couple of hours into my tea time and I was parched.  It had  already been a long day's drive as it was since we were trying to outrun some severe weather rolling in mid-state.  We ended up at an Indian Casino parking lot south of town for the night tired, but glad we dodged the worst of the storms.  Even still, Sinbad did not like the thunder at all.  How do you explain to a cat thunder won't hurt you?

These murals are really wonderful to show the beginnings of the town, colorful and creative. Would like to see them up closer someday!

Stella is terrified of thunder too, and all I can do is try and show her that I am not afraid. She is getting better but not cured of the fear.

Wonderful murals. The middle one of the logging train looks like it's charging out of the wall. Astonishing. Dothan was a veritable honey hole for murals. What an amazing find. Thanks, John, for contributing to this week's Monday Mural.

I always enjoy the historic murals. They give us a look at the way things were.

fantastic murals these ones John. Maybe a white-noise machine will stifle the storms in the bus for Sinbad to rest soundly

great murals! i love the tram - it almost looks 3D. and love the ingenuity of the gent who designed those wheels and used logs to move about.

We had a lab who used to quiver from head to toe during thunderstorms after jumping into bed with us. The other dogs and cats we've had over the years never even noticed the thunder. It was only the thunder, in other regards she was very confident and bold especially on duck hunting days! Did not know about "pitch" on ships, thanks for the history lesson.

What an amazing town! It is on my radar when we head that way.

Oh, my goodness! These are awesome!

I love to see historical murals of this type!

A very cool series of murals. Nice to learn a little of the town's history in this way.