At the Flea Market

I had a stack of a dozen or so old (1970's & 80's) magazines - Lost Treasure, Treasures and Prospector.  They had these great stories of lost treasure, abandoned mines, ghost towns and the like in the desert.  Many of the articles included old photos and it was fun for me to search out these places when I had my old Land Rover.  Now with the motor home I am confined to established roads and cannot do this anymore.  But I hated to just throw these magazines away.  I've had them in the back of my car for months not knowing what to do with them.  Yesterday at the flea market there was this seller giving away old "guy stuff" magazines.  I thought here was my chance to pass my treasure magazines on.  I went back to the car, got my stack, returned to the spot, stooped down and slipped my magazines into the box.  They are on the right in this photo. 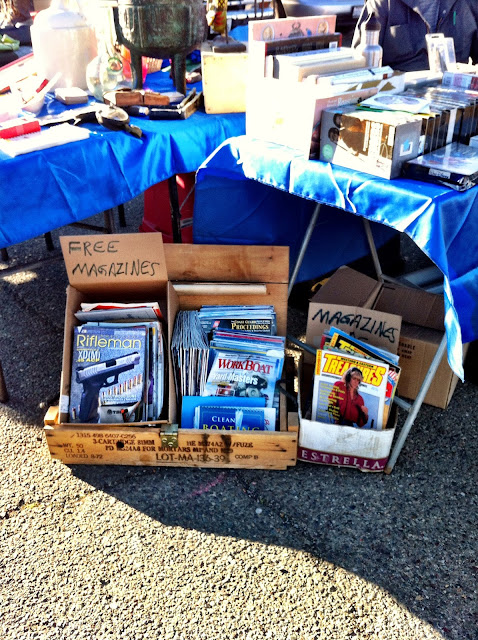 Before I could stand up and walk away, this guy was onto them like a duck on a June bug.  He looks like and old prospector doesn't he?  He walked away with a few in his hand.  I thought how it would be funny when someone later came along, picked up a couple Treasures magazines and said to the seller "So these are free; I can just take them?"
"Sure, help yourself."  Hmm...I don't remember having those magazines. 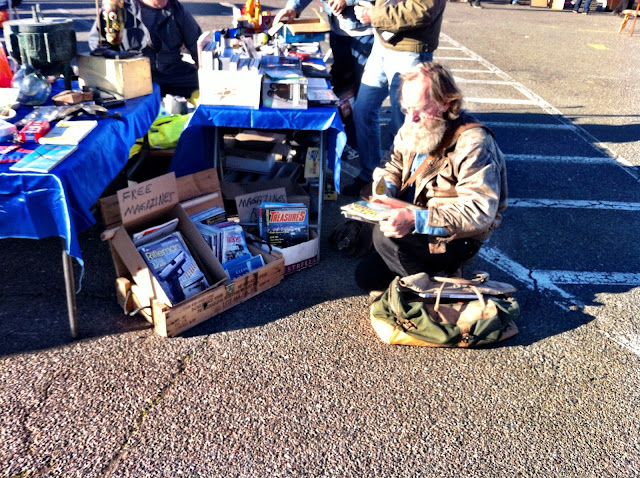 I told the story to my wife when I got home.
"Geeze, I can't believe you did that.  You're weird."
And that my friends is why she married me.

Here are some nice vases. 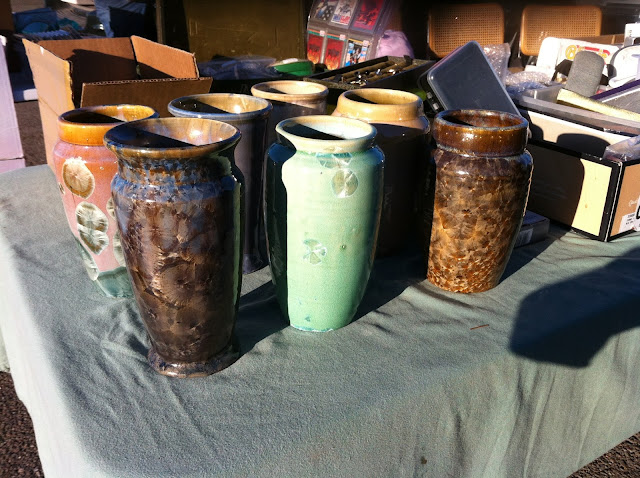 You know what. I do the same sometimes with old outdoor jackets. When i buy a new one i have to put away 2 others. And you know it helps. I give them away for free sometimes to the salvation army and sometimes to a fleamarket specialized in vintage clothing.

good idea handing them over John; you won't miss them, and someone else will get some good reading now.

i love the 'passing them along' method. :)

Wish I was there~
Wish you a very happy New Year~

I've often thought of getting rid of some of my 'stuff' by quietly donating to a yard sale, but never had the nerve to do it! I shall try to be braver in the new year and follow your example!
Happy New Year!
And Happy Trails to you!
Lea

You're like a cowbird, dropping your own eggs in another bird's nest. :)

There's a treasure in there somewhere.

«Louis» got a good chuckle out of your creative way of getting rid of those magazines. :-)

I was wondering the same thing...what the guy would think if he saw them.