When we crossed the border into West Virginia I stopped at their Welcome Center.  I asked the young man at the center what I should see while travelling through his state.  He said that I should go to Grandview which was only 6 miles away from Little Beaver State Park.  So go we did just that the following morning.  Well I could see how they came by the name for the overlook at the high cliff did provide a grand view. 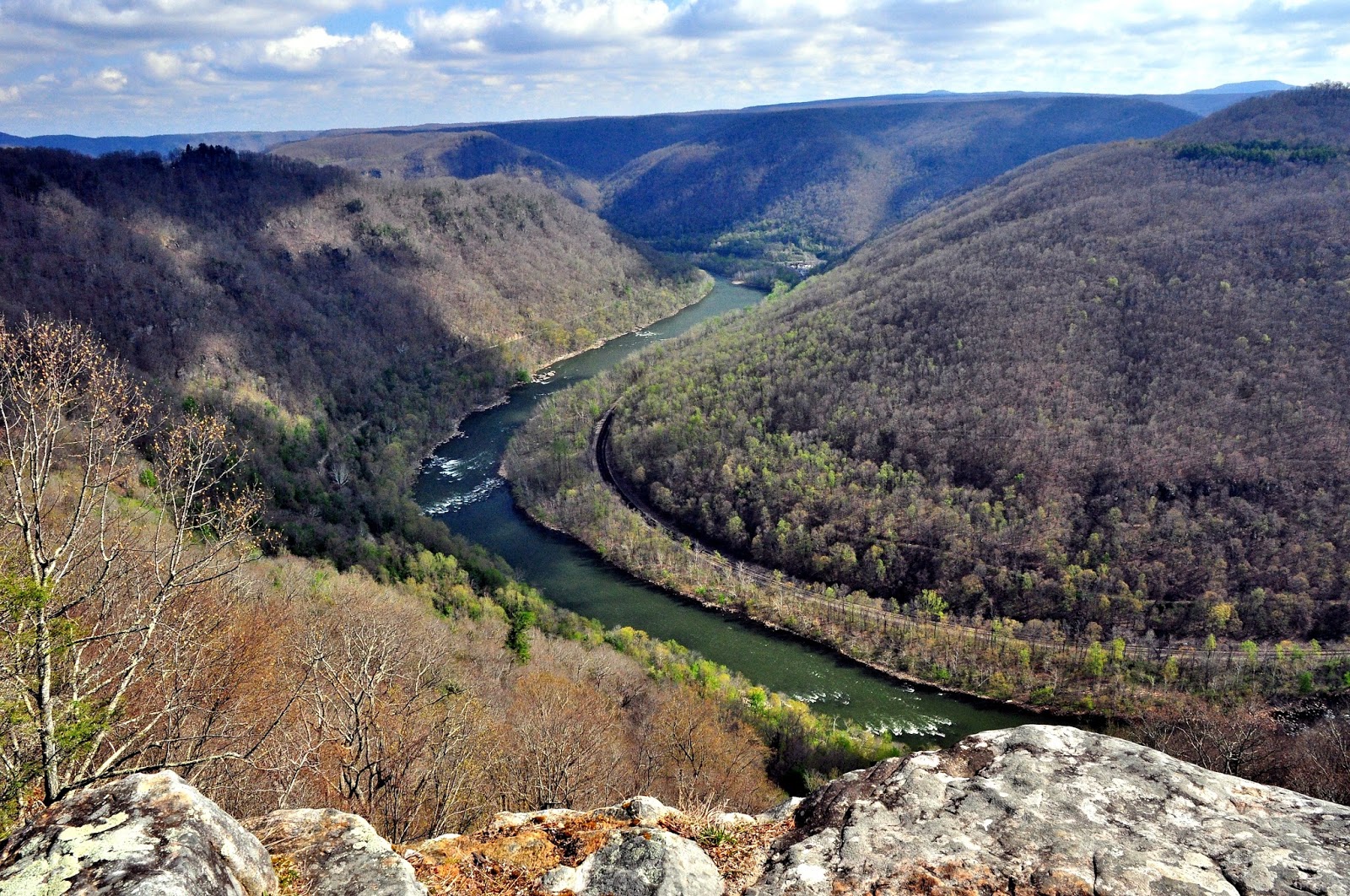 My first thought was that millions of years from now this could be another Grand Canyon.
I'll have to go back and check on that in the future. 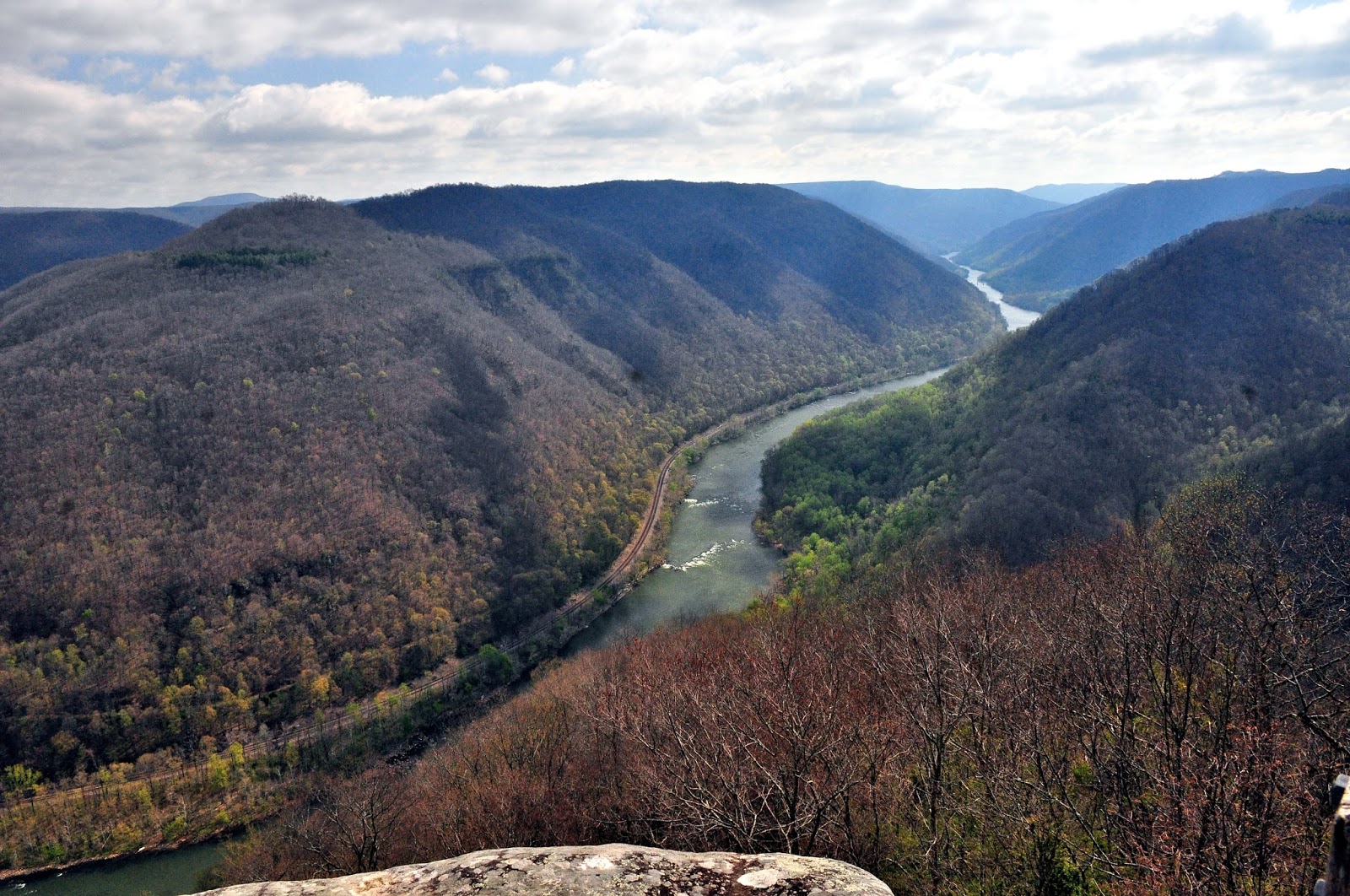 There is a scene in the canyonlands of Utah called Dead Horse Point that looks very similar to this.
Just scrape away all the trees and replace it with red rock desert. 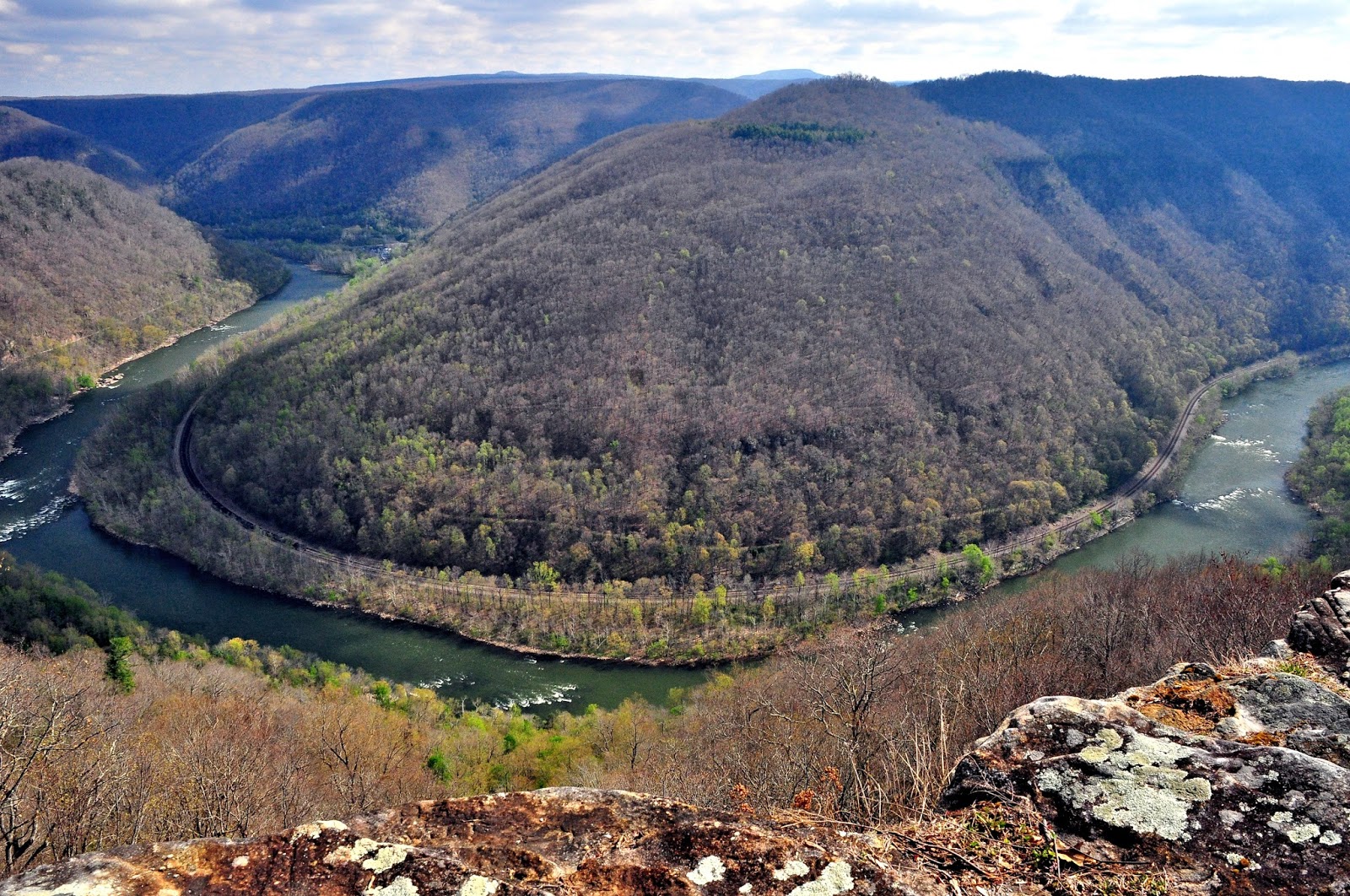 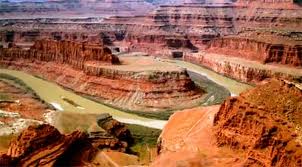 You can see the train tracks hugging the river bank in the above photos.
Finally a train load with coal came by.  It looked like a miniature train set 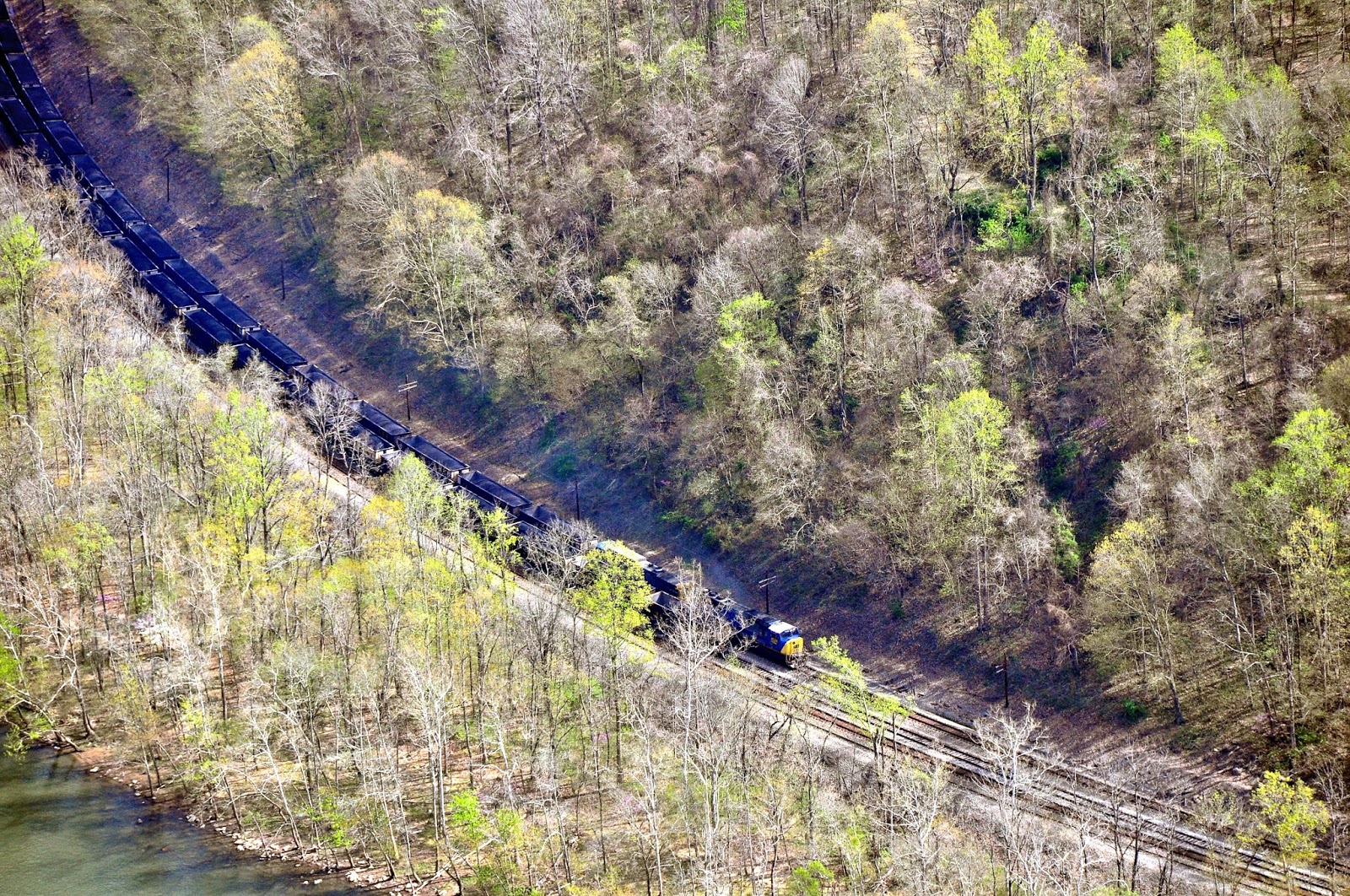 This gentleman arrived with me during that early morning hour.  He was from North Carolina and on his way home after taking care of some "family stuff in Wisconsin" as he put it.  He was driving a car and taking his dear sweet time going home, seeing all there was to see along the way.  He asked me how I liked my View (the motor home).  He told me he was thinking about getting something like that as his wife had died a few years back and was now "free to travel".  That made me wonder if she didn't like to travel or what?  I didn't ask although he left the door open for me to do so.  Sometimes I just don't ask about things that I feel I may later regret asking.  Some sad story that would hang with me all day long.  I'd guess he was around my age but it was a real slow effort for him to get around with the assistance of his cane.  I wished him a safe trip home and hoped he gets to live his dream as I am. 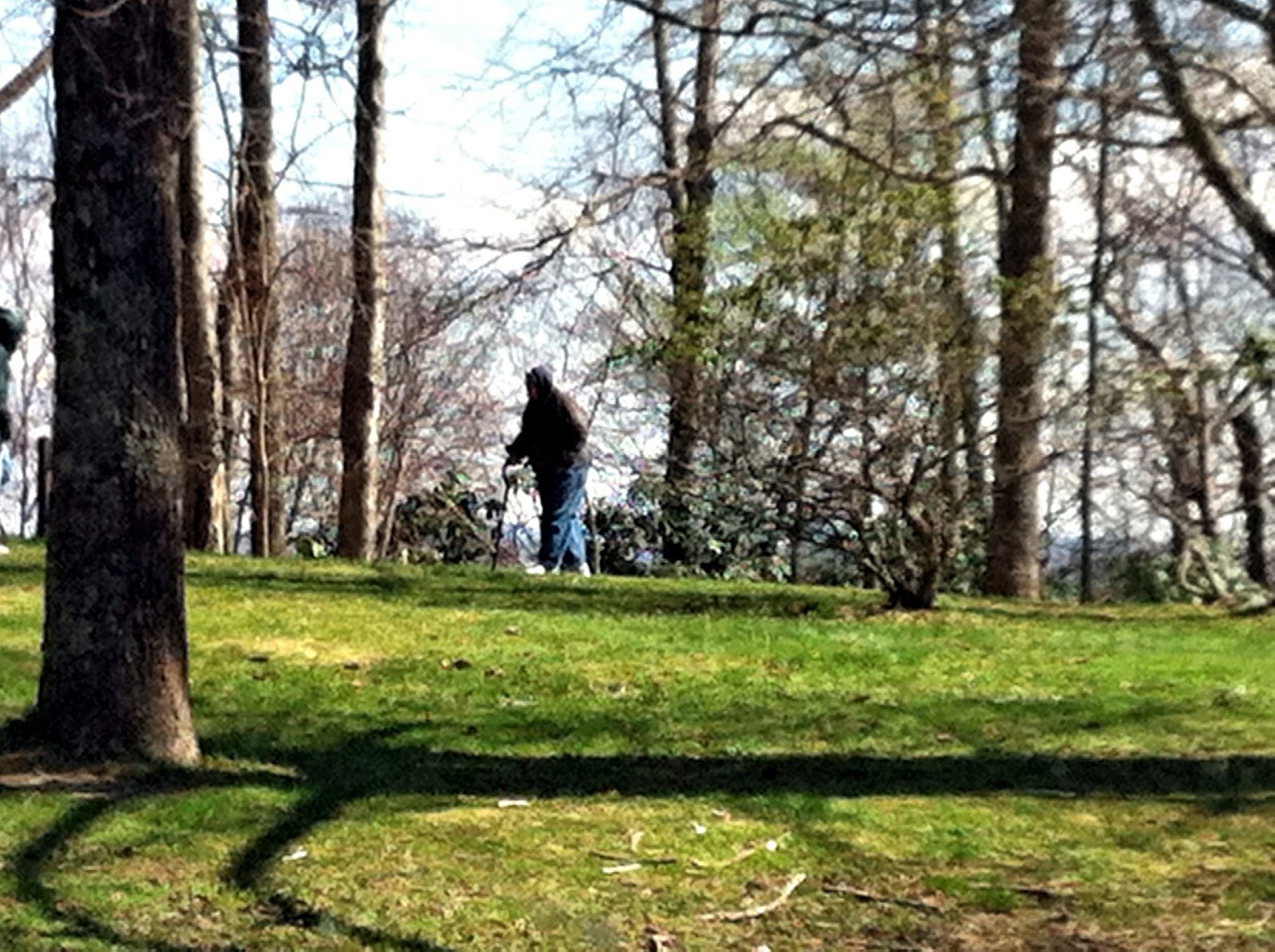 Update on yesterday's blogger issue, it seems that the problem is widespread among other bloggers too.  The blogger forum states "they are working on it".   I'll remain patient.

edit: It is a new day and blogger is fixed!  All is right in the world once again.

well good to see Blogger has just sorted itself out again. Some mighty impressive scenery here too John

Its better with trees then without. Nevertheless great views and nice to follow your thoughts about interviewing your fellow travelers. I like that.

Those are amazing views, that is what I like about the US so much. You feel so tiny in this nature that overwhelmes you. So Blogger has some trouble with you, hope they can fix it very soon.

Wow, this place is amazing!
You1're right, the places are very similar, I would think the photos were taken in the same area! ;-)

That is definitely a grand view!

Let us know when you go back to Grand View to see if it has turned into a "grand Canyon." Be sure to take tons of photos. ;))

Beautiful spot. I want to travel back east soon. So many great places.

fixed until they mess with something else, at least. :)

that is a very grand view!

Such breathtaking views. I have traveled through West VA, in the 90s, once. I thought it was beautiful in Fall, but your photos show there is so much more to enjoy. Thanks for sharing these views.

Those are beautiful views. When I saw that horseshoe bend I thought the same thing you did. I took a few minutes to see what you've been up to and I'm totally jealous.