I had this place picked out to go see when we toured the Great Plains States in 2012.  But we never made it that far south in Iowa on that trip and I figured some other time.  Well on this trip that time came.  That morning I was pretty excited to go see what I thought would be a big Quonset hut building filled with old cars from thrill shows of days gone by.  That's how my imagination works.  So guess what I was thinking when I pulled up to this. 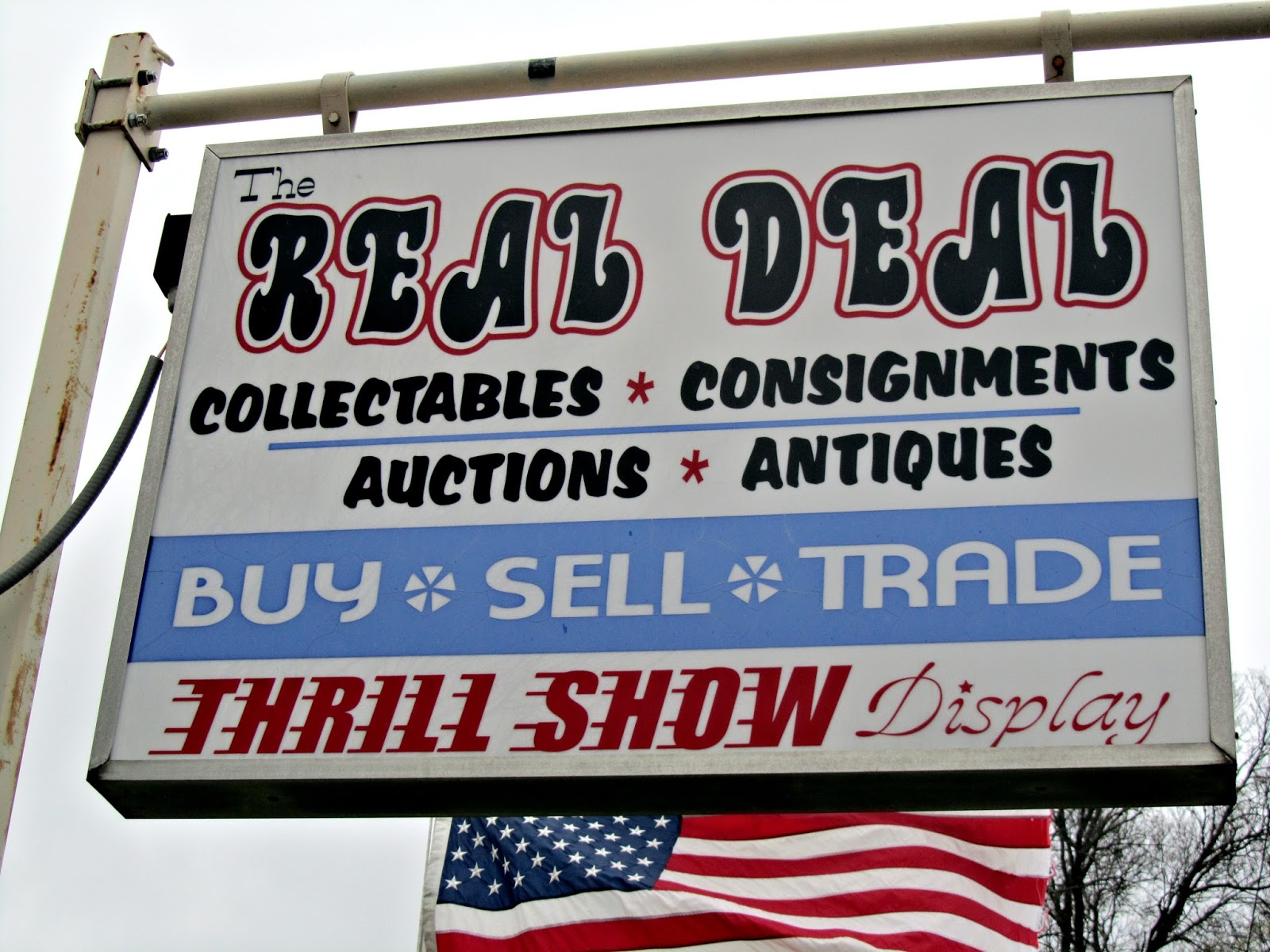 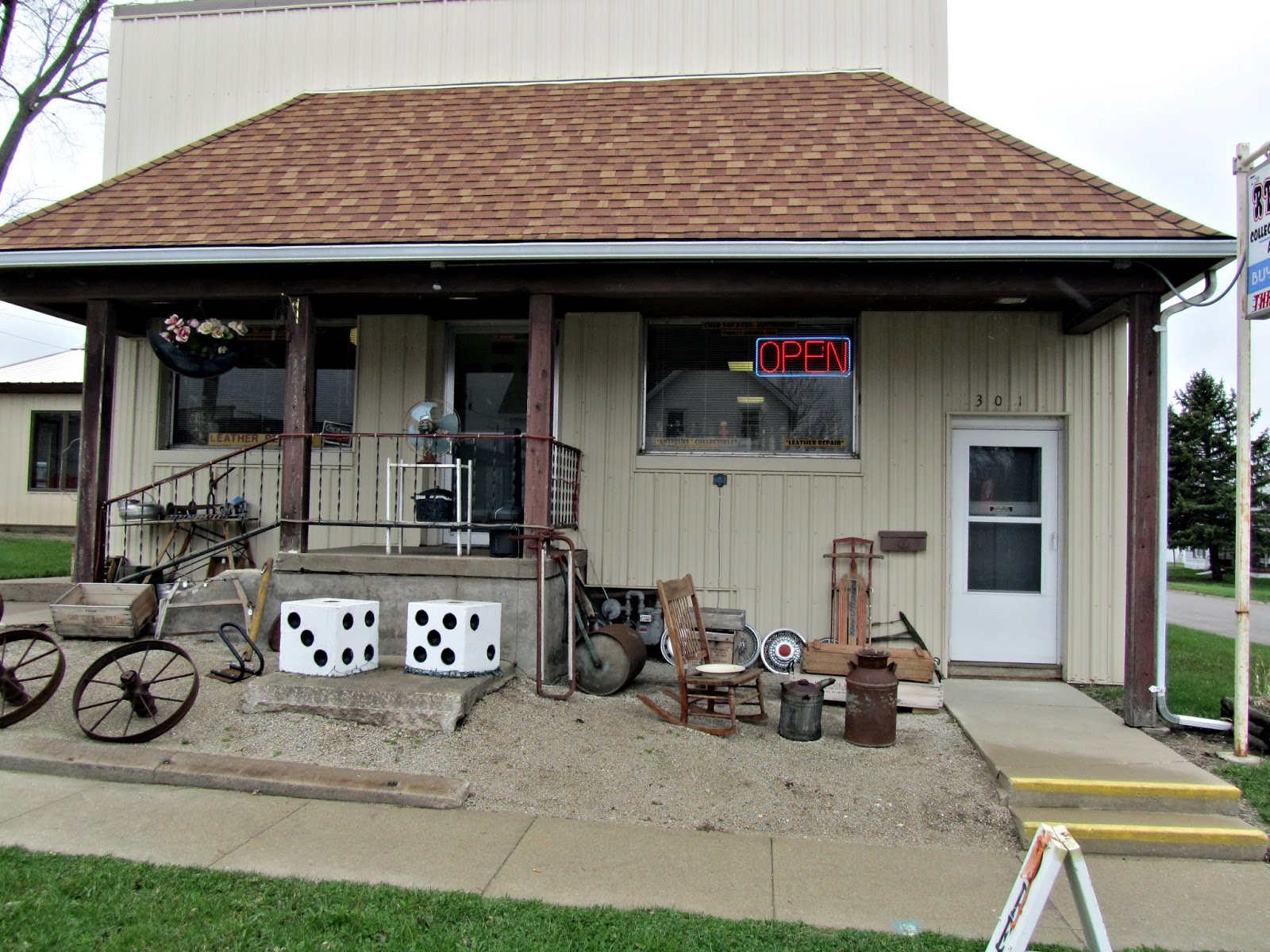 I walked in and was immediately knocked back by the overpowering smell of what I thought was cigarette smoke.  Great! This isn't going to last long.  The owner came out from back and introduced himself.  I then noticed some incense burning on a shelf behind the counter.  I thought maybe that might be the source of the offending odor.  It is said after several minutes being exposed to a terrible smell that soon you become used to it and it doesn't bother you as much.  Chad Van Dyke was around my age and a very pleasant fellow to talk with and soon I had forgotten about how bad it smelled in there. 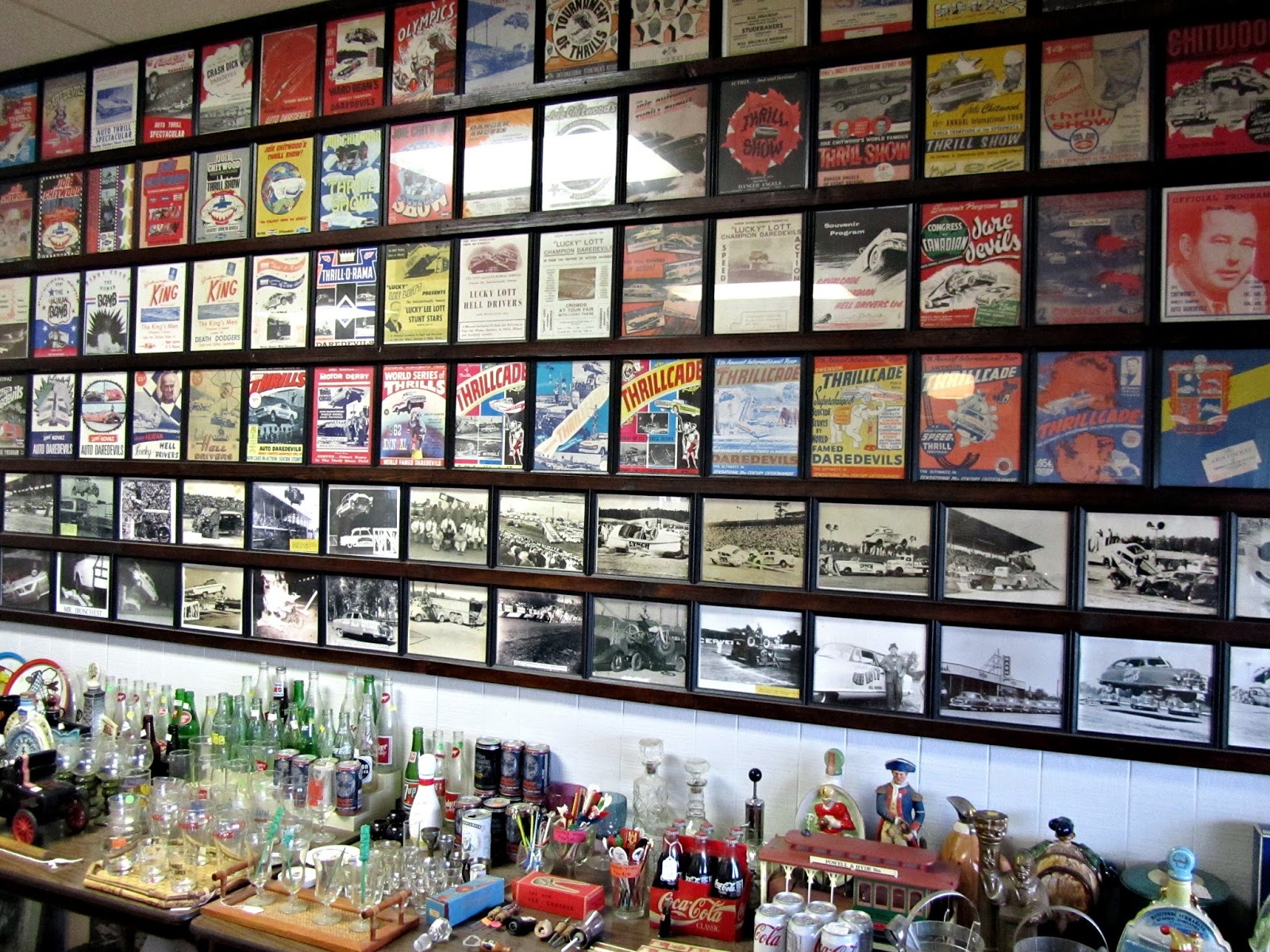 Every available bit of wall space was covered with pictures, magazines, programs and you name it having to do with auto thrill shows.  It was really a remarkable collection of material.  The rest of his shop had all types of small antiques and collectibles, none of which had to do with auto thrill shows.  As you can see a little bit of it in the above photo, all the items were very orderly displayed.  I complimented Chad on this for it is something rarely seen in shops of this sort. 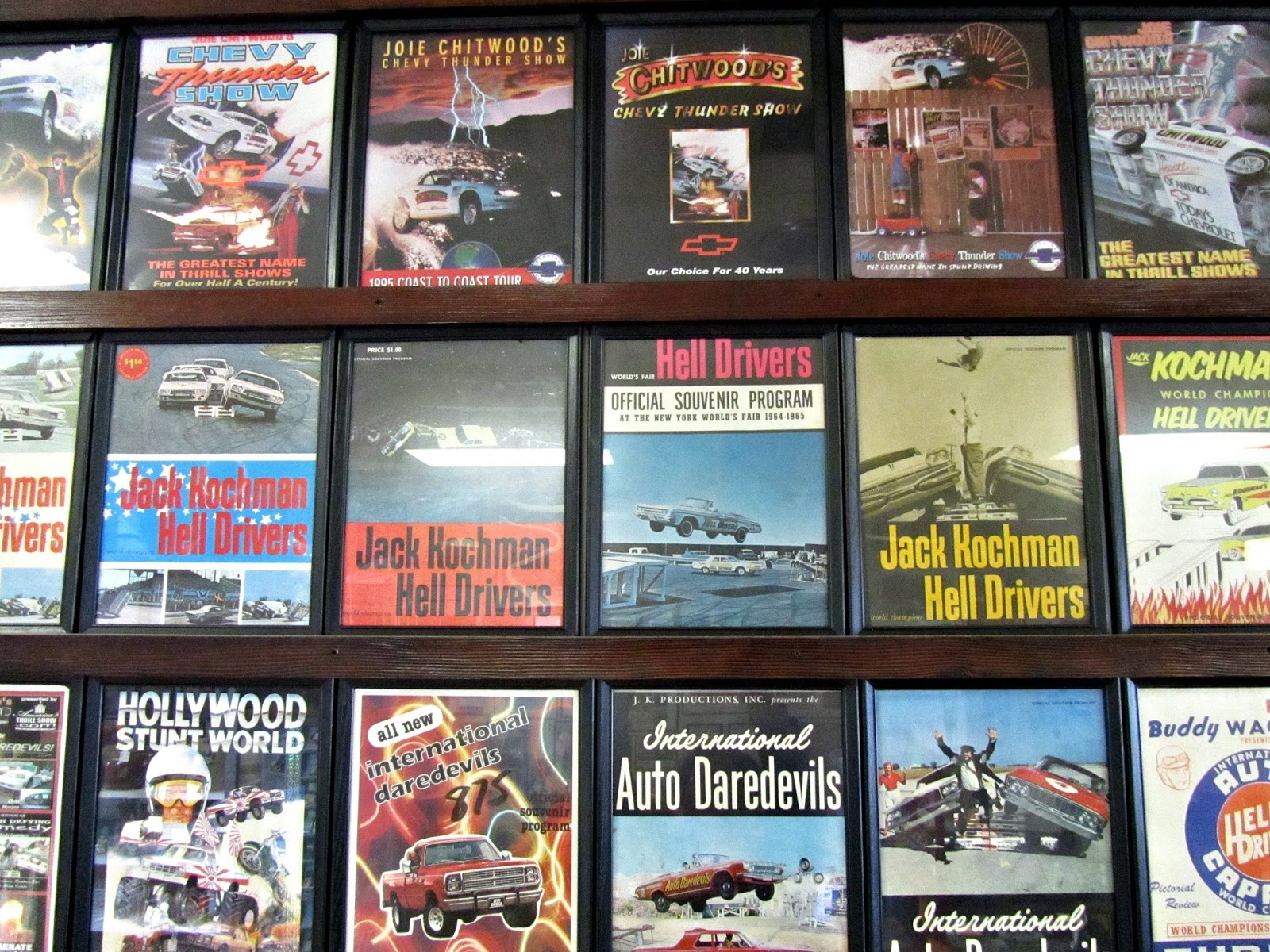 Chad told me that for a number of years he worked the circuit with these thrill shows and this is where his interest grew for his collection.  He said he had a lot more stuff in storage and just didn't have the room for everything, thrill show memorabilia and his antique/collectibles both.  He was hoping to expand the building someday.  It was then I confessed to him what I had hoped to see, a lot of old crashed and beat-up jalopys.  He told me that in the old days they simply just didn't survive and were disposed of in junkyards.  Small wonder when looking at these photos. 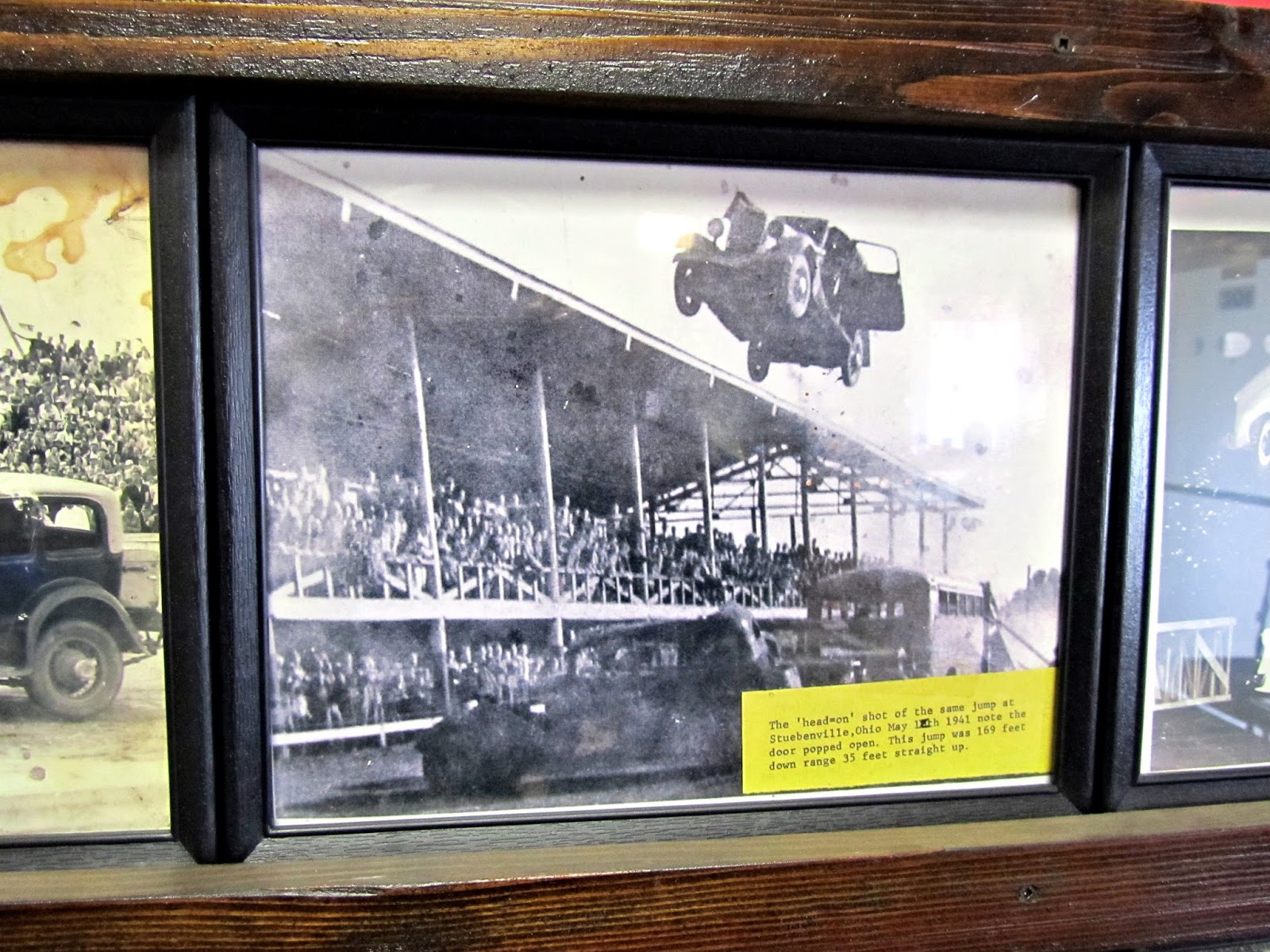 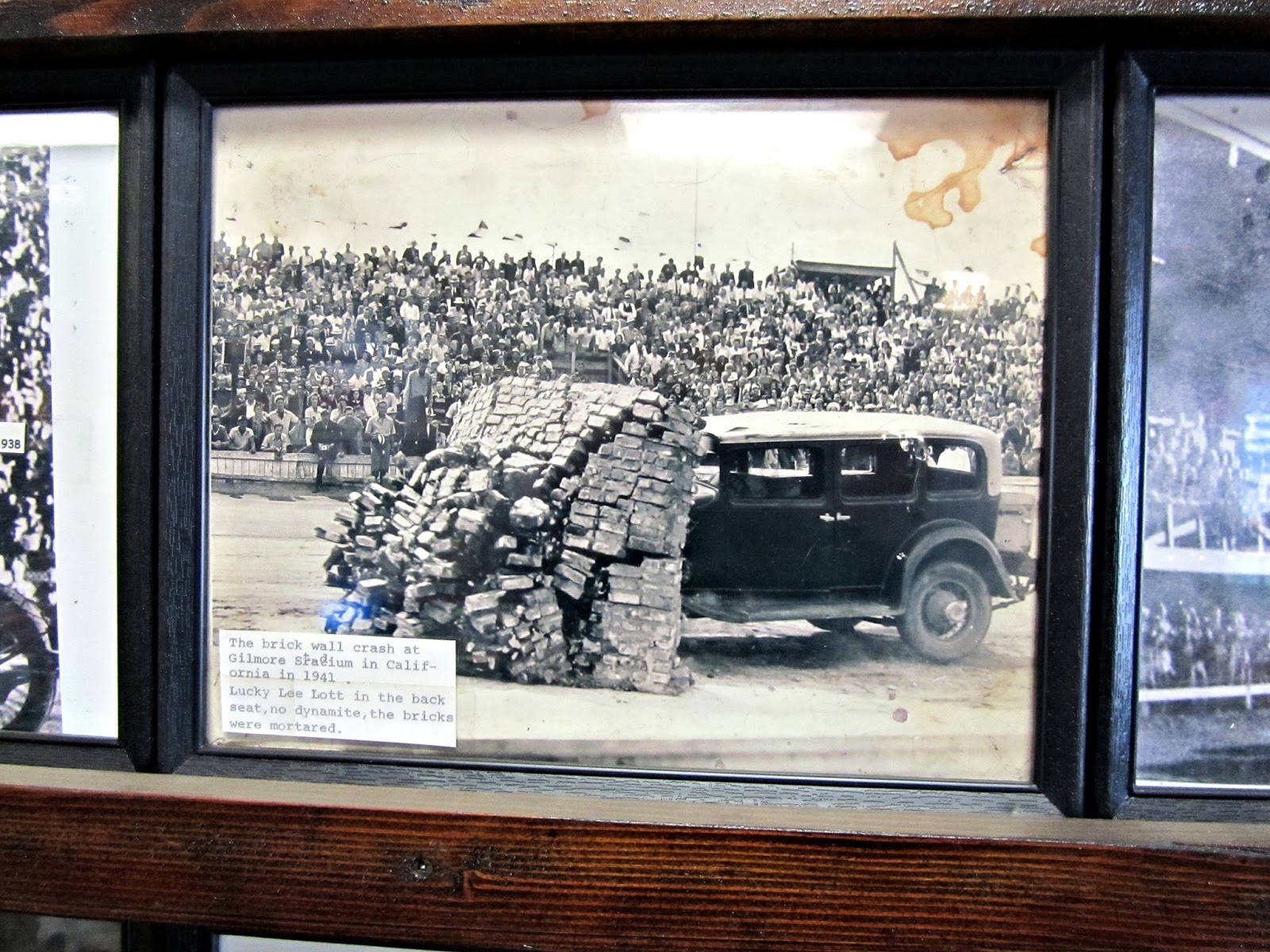 In the more recent years the cars were used for just that one season and then, now get this, sold off to the public!  "Great deal!  Low mileage.  Driven only on weekends."  He said that many of the cars were used just like they came from the dealer.  Any writing that was on there, stickers, decals and the like, were removed, the car cleaned up and then sold.  No modifications were ever made except maybe stiffer shock absorbers and a few safety items.  Seeing Dodges, Fords and Chevrolets performing these stunts were great advertising for the auto manufacturers. 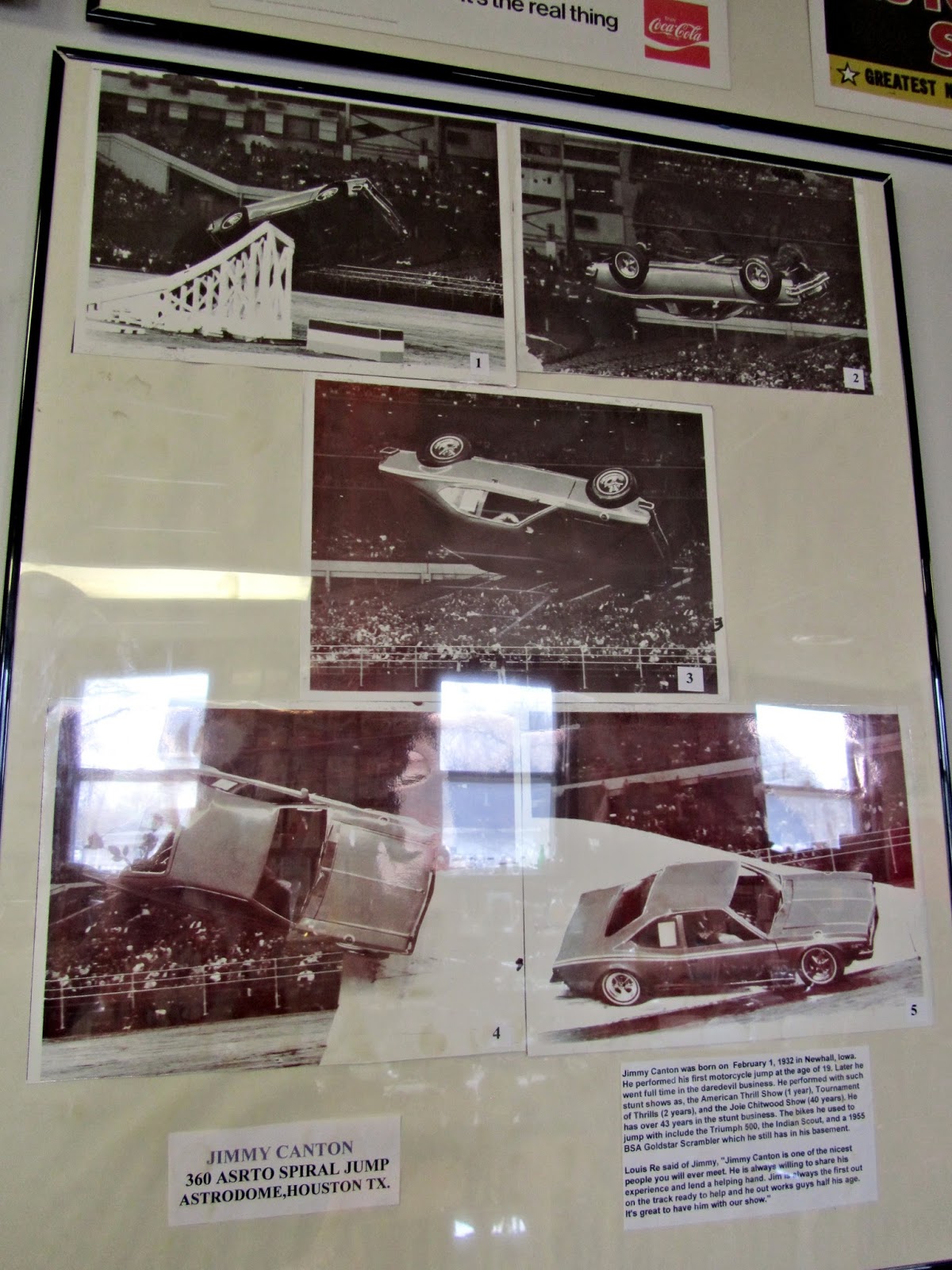 I wanted something from this visit to put up inside the Little House on the Highway but he didn't have anything out for sale.  He dug out some post cards to give to me.  I tried to give him a few dollars for them to help with his dream of expanding the building but he wouldn't take it.  That was just the kind of guy Chad was.  If you are interested in seeing more pictures of his shop check out the little website here.  Good grief, I was looking at his site and he had t-shirts for sale!  I would have bought one.  I'll have to contact him. 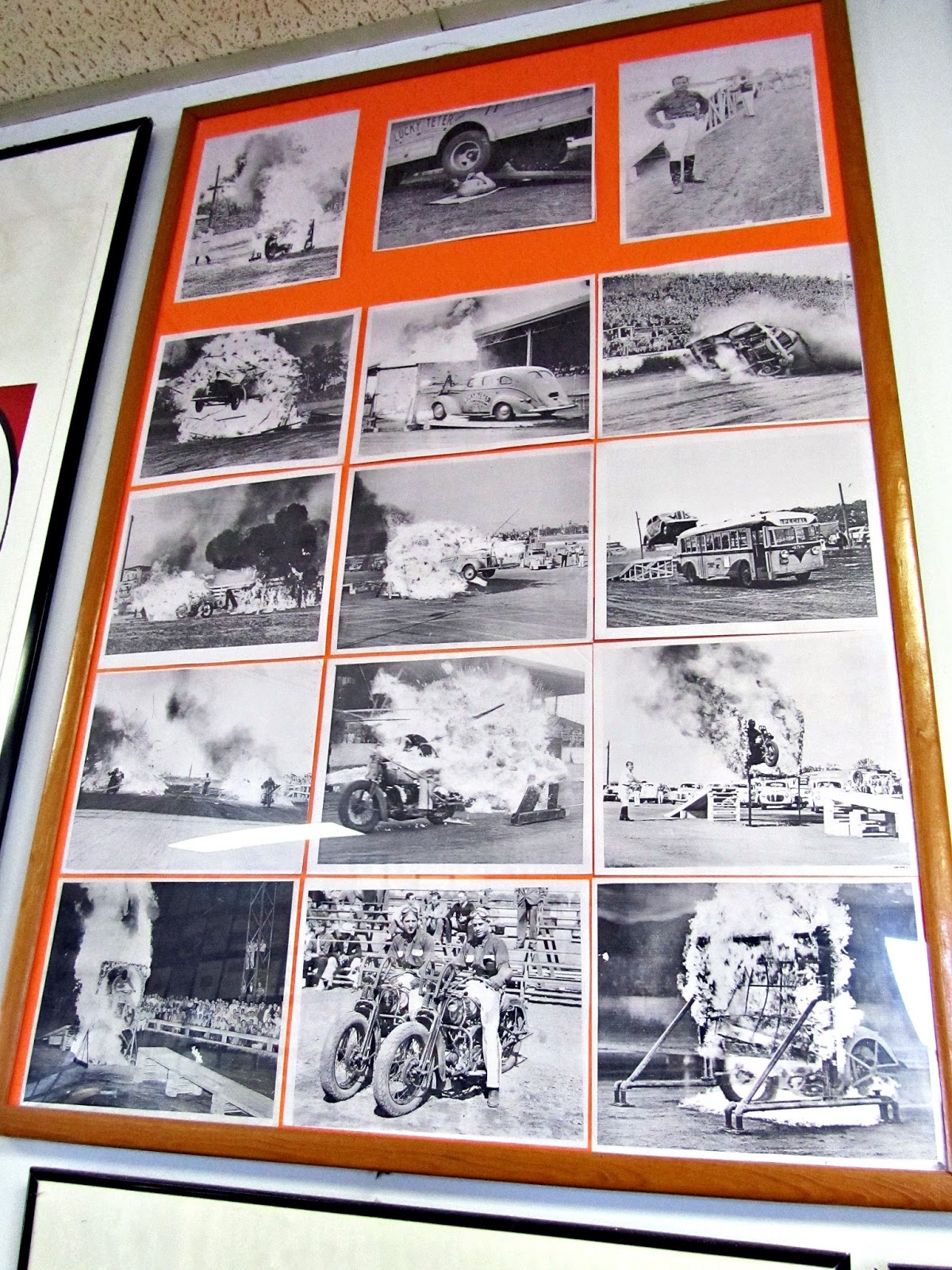 I stepped back outside into the fresh Iowa air and checked my flannel shirt.  It wreaked!  I hung it outside our camp that afternoon and it aired out just fine.
------
I sent Chad an e-mail and he got right back to me.  He had no t-shirts at the time I was there.  He'll let me know when a new batch of t-shirts would be available.  He remembered our visit.  I didn't ask about the smokey smell.

well....incense and all, you still got a buzz out of the visit with Chad. Maybe a t-shirt coming up.

Great story only possible in the land that was born for cars. I like it and hope that you will get that T-shirt.

That is nice those specialized shops born from a hobby. He certainly is very organized indeed. That makes it easy to look at.

This is the kind of place I would like to visit! And I'm sure I would love to have some of those things at my place too! ;-)

wonder why he feels the need to burn incense? i don't tolerate overpowering smells well, either.

glad you two had a nice visit, though. and you enjoyed his collection and displays.

I'm not into car racing but I did enjoy your photos. PS: I quite smoking over 40 years ago and I can't stand the smell either.

Looks like it was quite the event in the past.

I'm glad you showed photos as I'm afraid I would not have been able to stay in there. Burning incense gives me a throbbing headache. But Chad sounds like a neat guy.

An interesting place to visit! Did you tell him you had a blog???

I posted a pic of place north of here...I had been in it years before but had not taken pics and we were passing and snapped a pic that I posted.

Within a day or two they had came and commented on it and told me next time I was by to stop in. I always wondered how they spotted it...

Great shot of the car busting through the brick wall. That is a classic.

That is some classic Americana there, John. Great stuff.