We were approaching Denison Iowa and I was looking at my map trying to figure out where we would stay for the night.  In doing so I saw this road named Donna Reed Road.  "Now why would that be if Donna Reed herself was not from around here?"  The next morning I stopped at the post office in town to buy some stamps, and then asked about the road.  Yes, this was her home town and I was directed to the Donna Reed Performing Arts Center a couple blocks away.  Oh unexpected happiness!

A small section of what was once the Ritz movie theater (more on it in an upcoming post) now is home to the Donna Reed Foundation.  As a teen Donna worked as an usher for the theater.  Remember movie ushers?

Okay, who cannot fall in love with that face and smile?  During the Christmas season there is a miniature replica of Bedford Falls, the town from It's a Wonderful Life, in the display window. 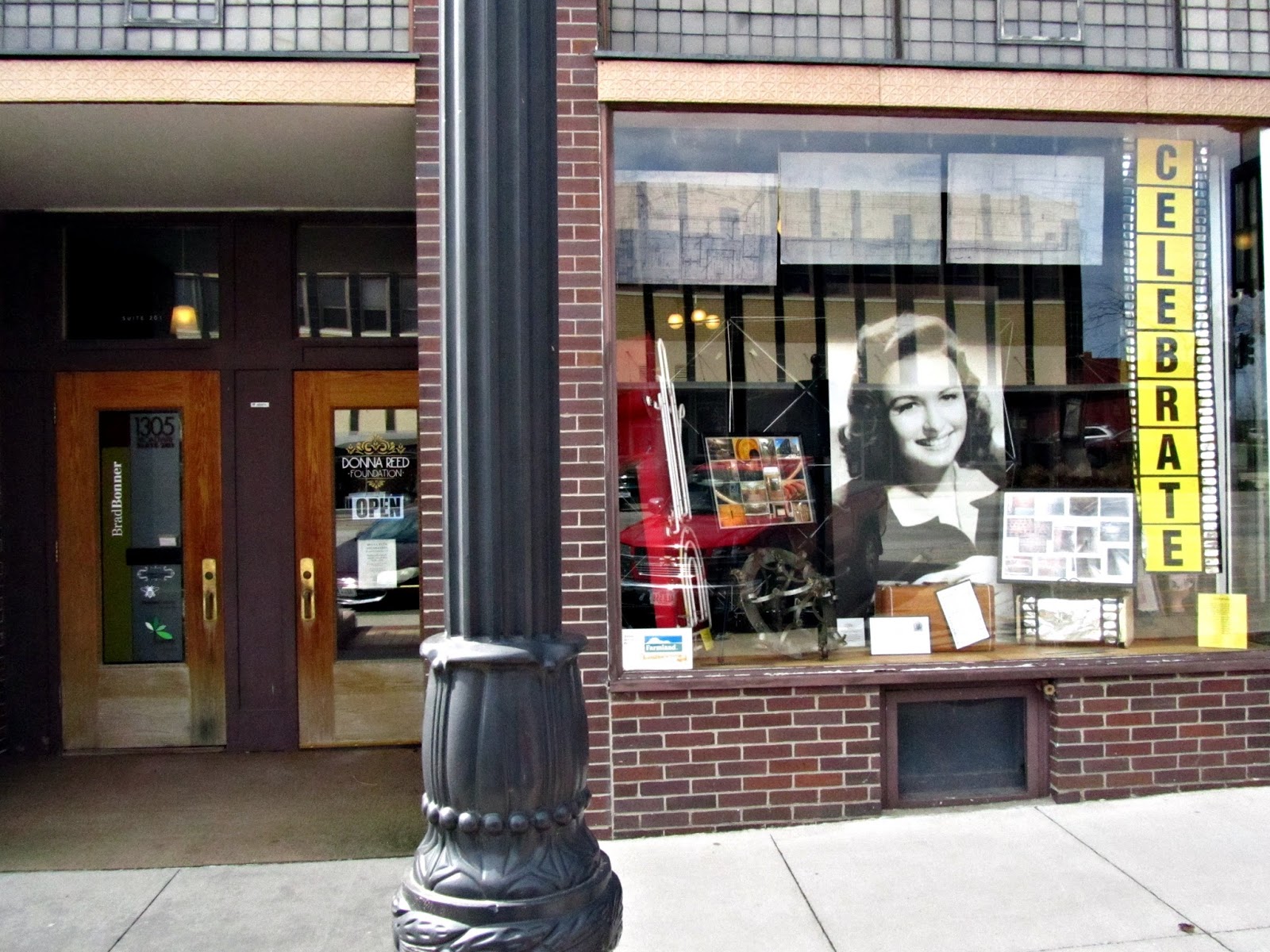 Donna Reed was born Donnabelle Mullenger in 1921.  My goodness, what a name.
She could have kept that name in my opinion. 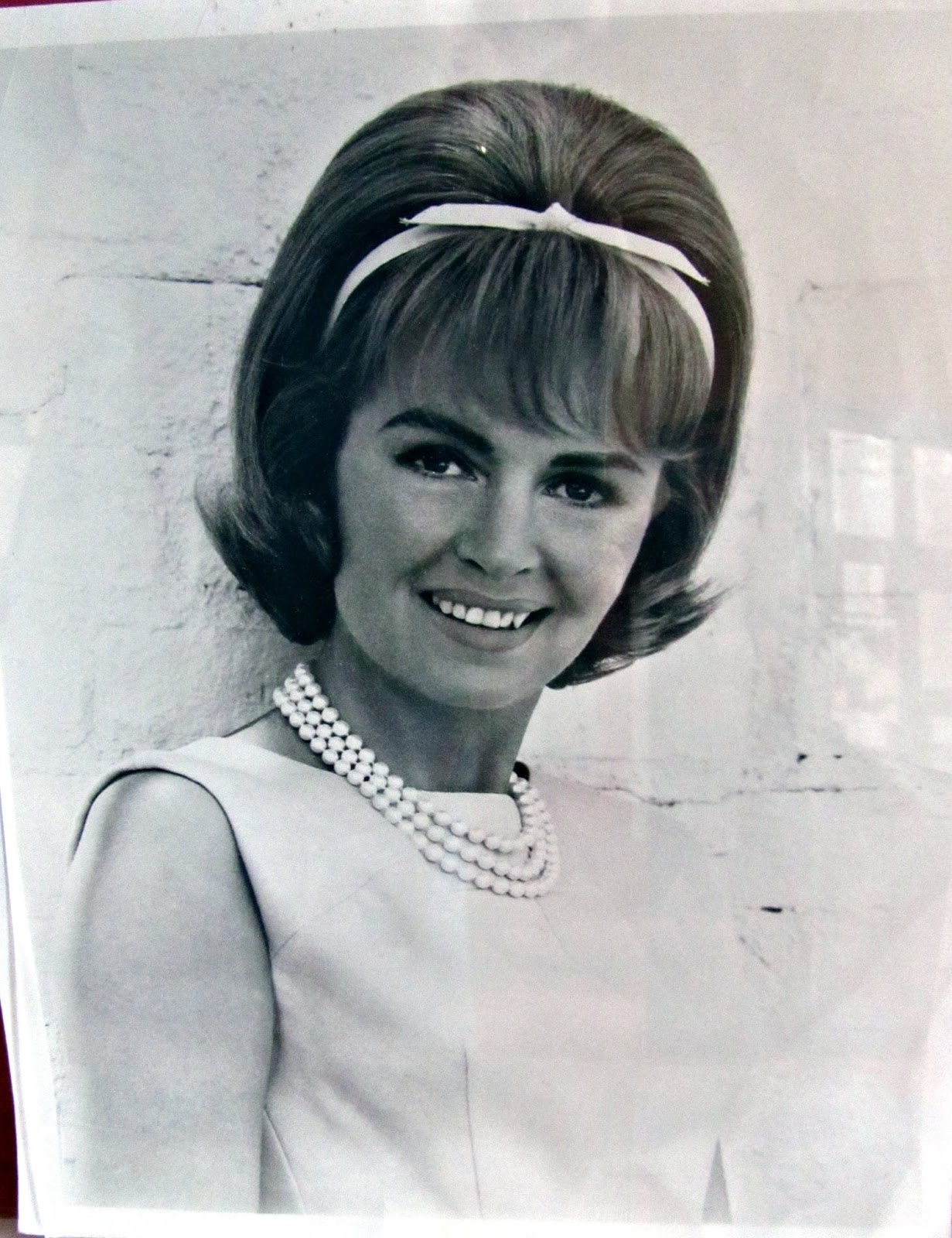 She grew up in a two-story farm house south of Denison (the house is no longer there) and went to grade school in a one room country school.  She was the eldest of five children.  So you can imagine she did all there was expected of a farm girl doing chores and helping to look after her siblings.  When she began high school she moved into town staying with her grandmother.  Even at an early stage her beauty and personality stood out as she was named Homecoming Queen in high school.

After graduating from high school, at the age of 17, she left by train for Los Angeles to live with her aunt.  Being a resident of California she was able to get free tuition at Los Angeles City College learning shorthand and typing, dreaming of being a big city private secretary.  A career in the movies was the furthest thing from her mind.

Near the end of her second year of college, Donna was entered in a school beauty contest which she won.  Her photograph appeared in local newspapers and talent agents began to seek her out.  Donna made them all wait until she finished college for if she wasn't successful in movies, she could always fall back on her secretarial career.

But successful she was eventually starring in more than 40 movies, six of which are considered classics. 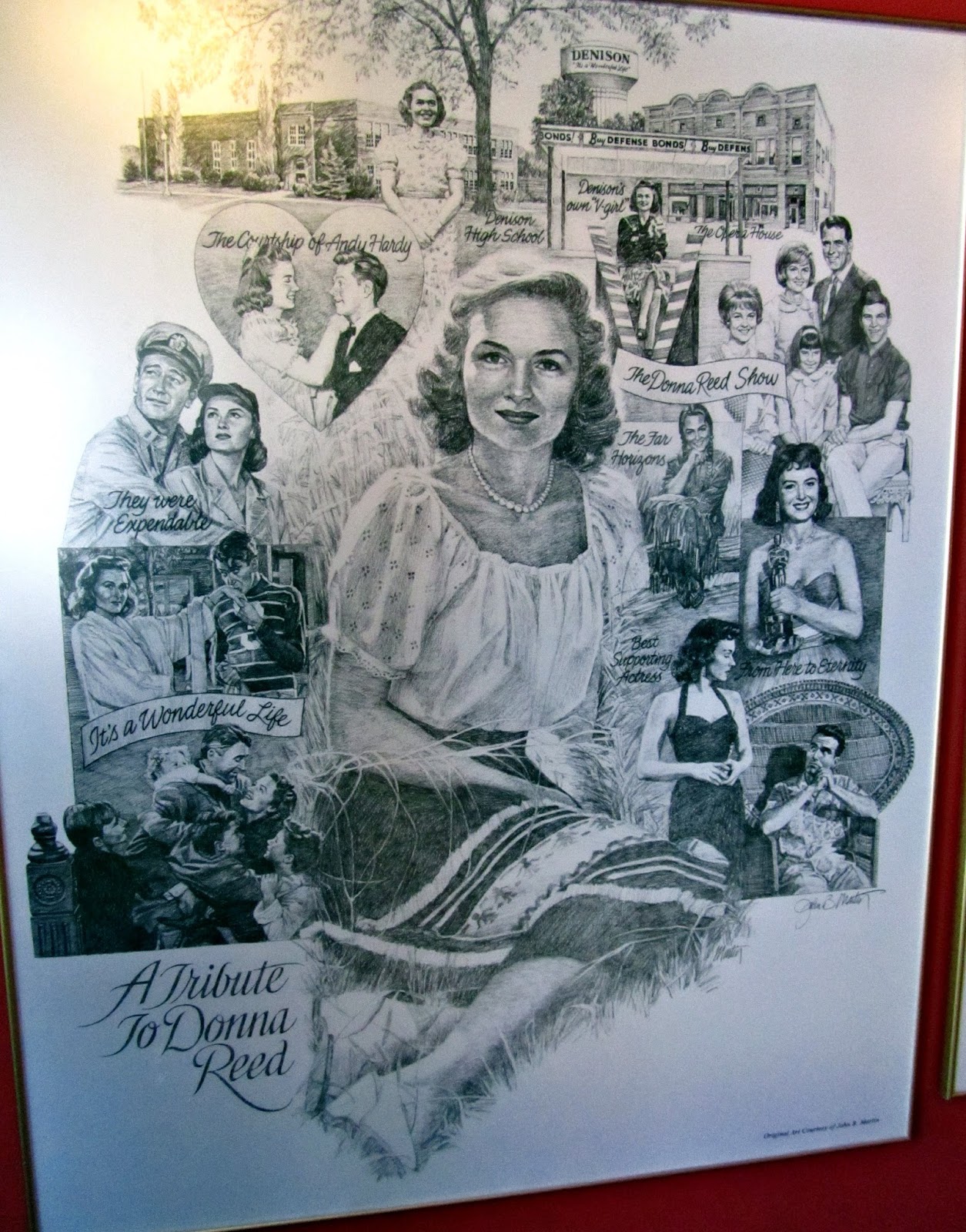 She probably is best known for her role as Mary Bailey, Jimmy Stewart's (George Bailey) wife in
Frank Capra's 1946 film It's a Wonderful Life.  I think Frank put it best in describing my attraction for this woman.  You can read it here in the second paragraph towards the end. 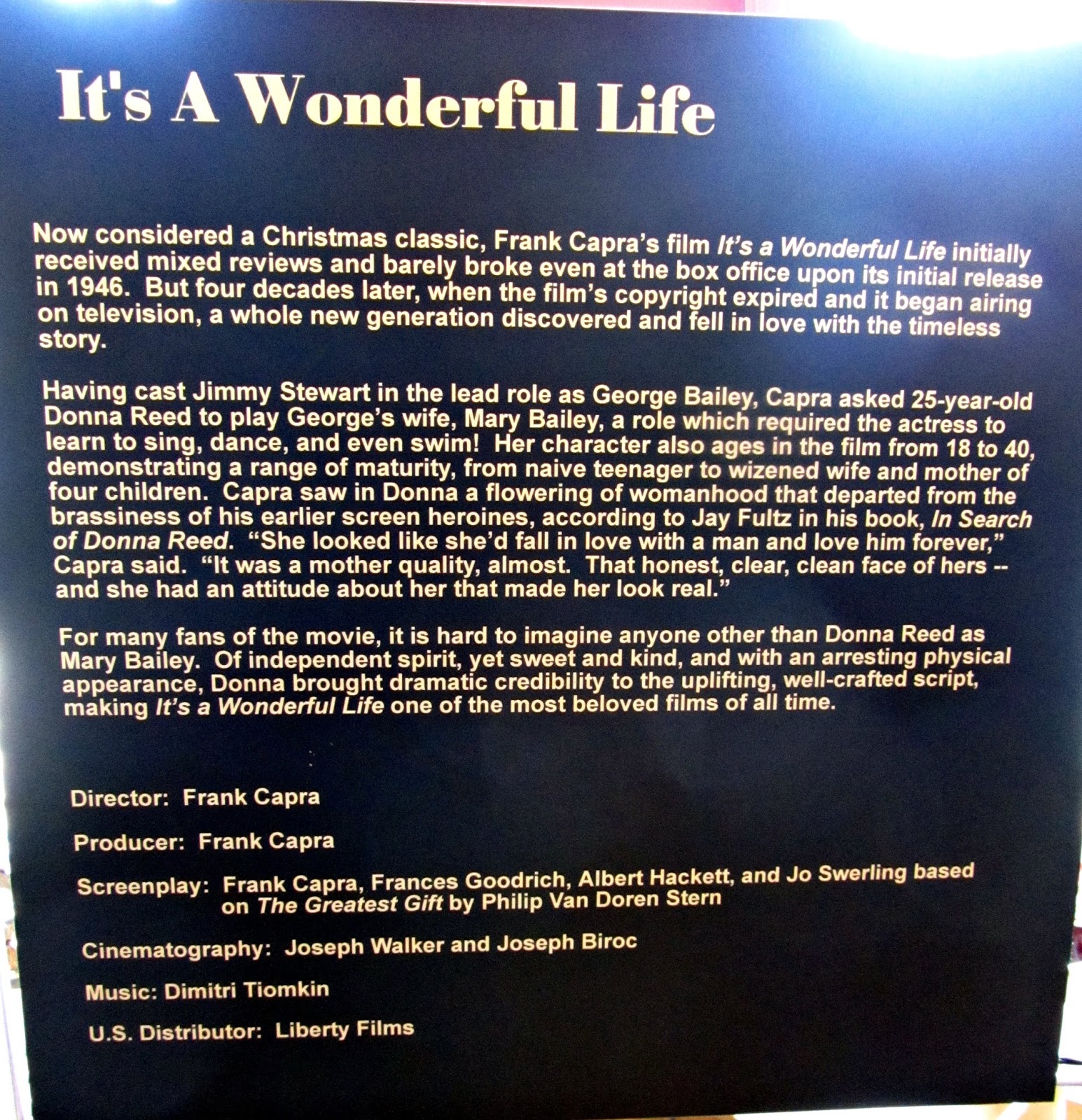 Jimmy Stewart was nervous about the phone scene kiss because it was his first screen kiss since returning to Hollywood after the war.  He said of all his films, this one was his favorite.  He was 38 at the time.  It was Donna Reed's first starring role. 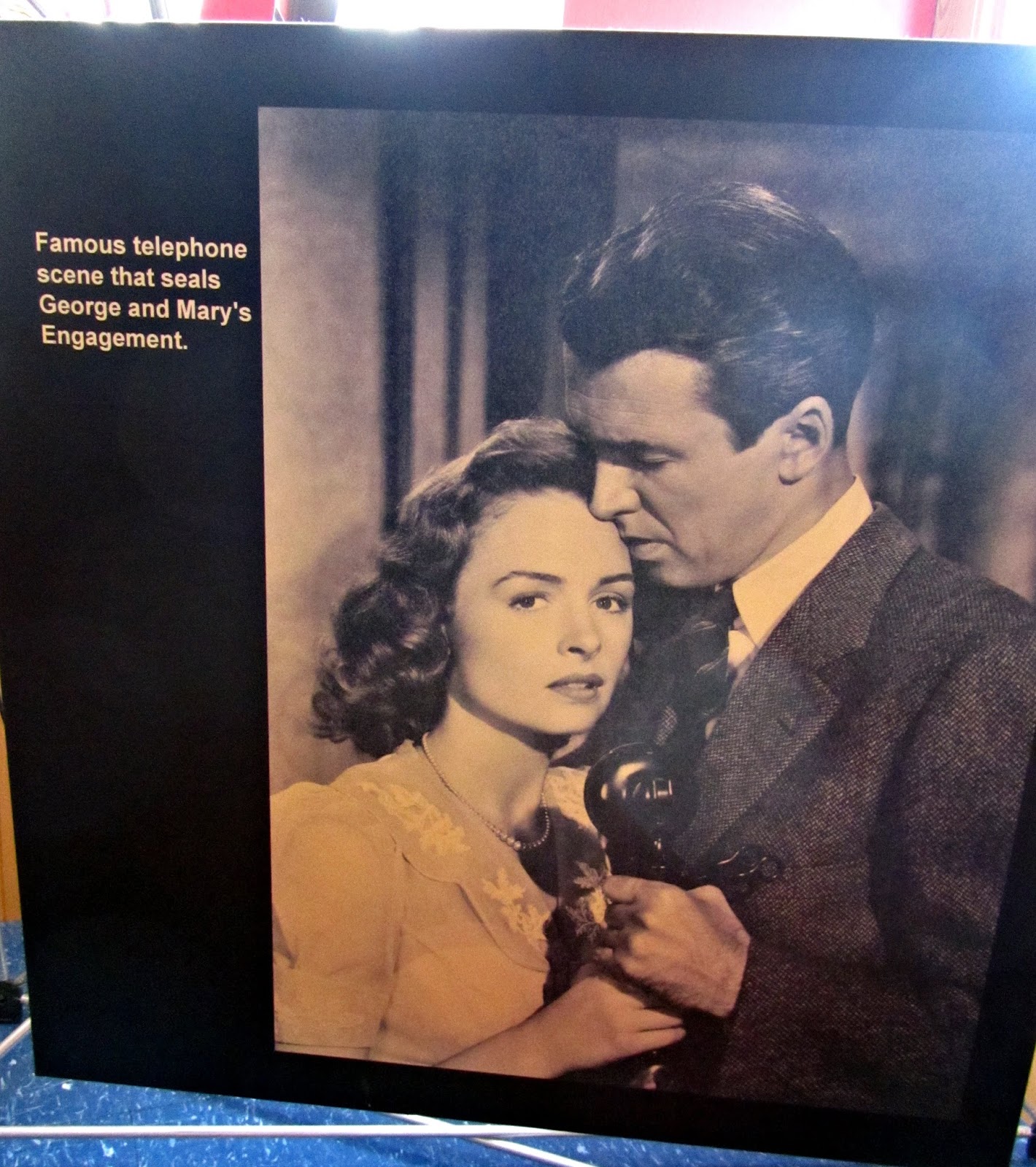 Donna won an Academy Award for her role in From Here to Eternity. 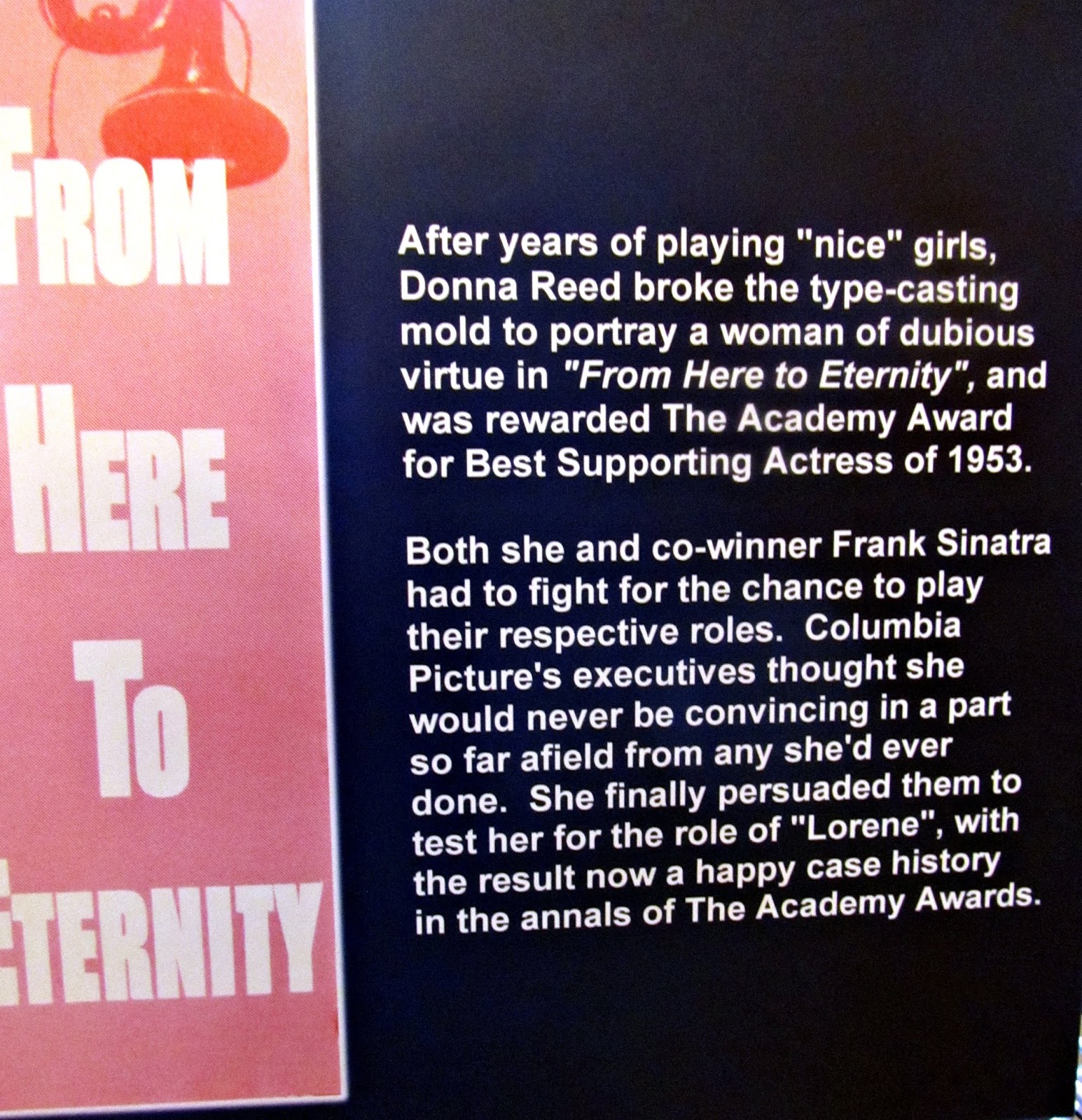 Throughout her career, Donna never forgot her roots as an Iowa farm girl, a fact she was proud of, and she returned to Denison often.  The last time Donna returned to Denison was during Thanksgiving in 1984.  She never sought attention but was always accessible to well-wishers and autograph seekers during her visits.
Following her death in 1986 she left her Oscar to the City of Denison.  Friends and family came to pay tribute to her memory and from that gathering the Donna Reed Foundation for the Performing Arts was born.  The City will not relinquish the Oscar to the Center so all they have is her certificate of the award. 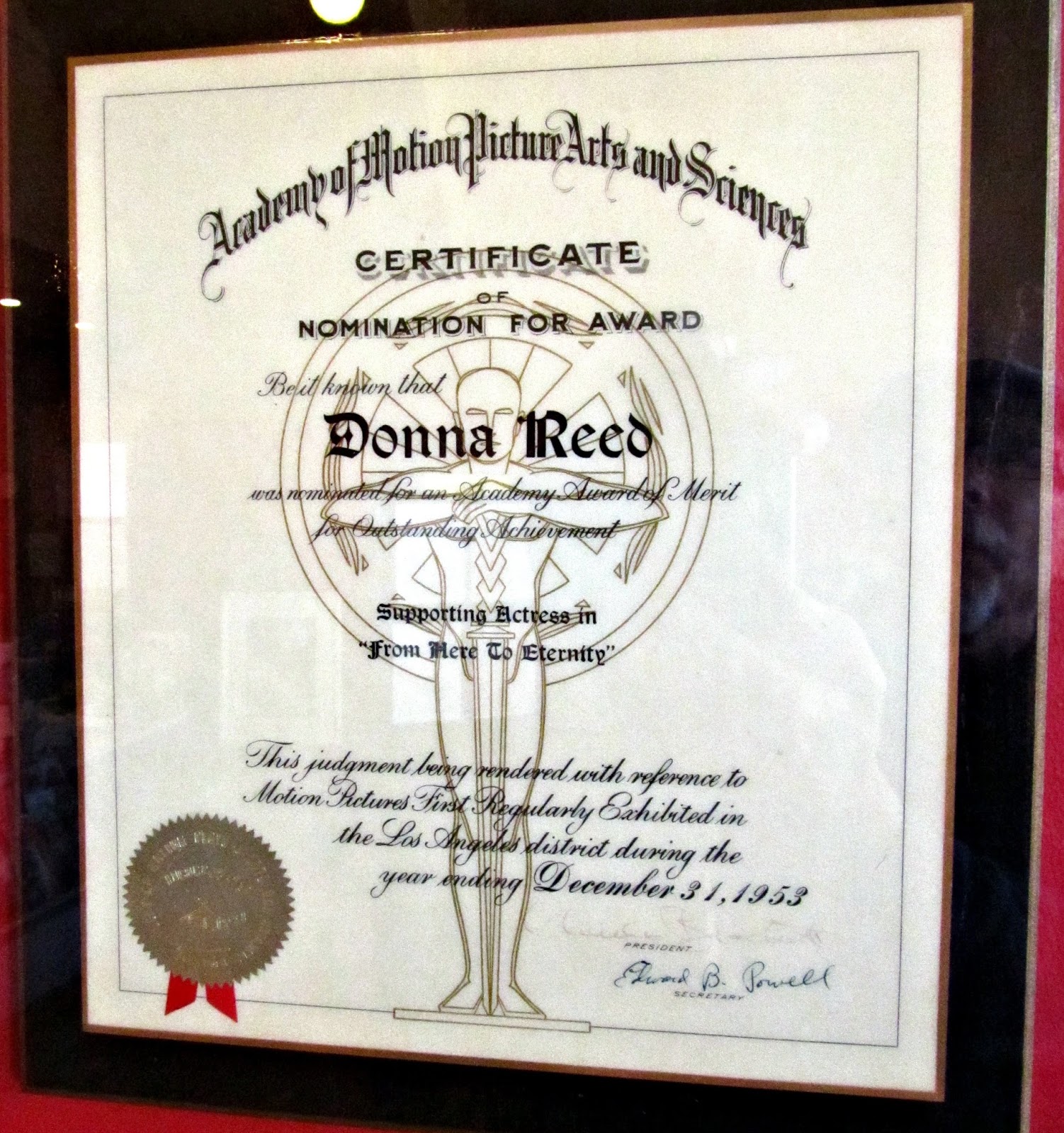 Photos taken on the night she won her Oscar for Best Supporting Actress.
It was difficult trying to get photos inside without glare from the lights. 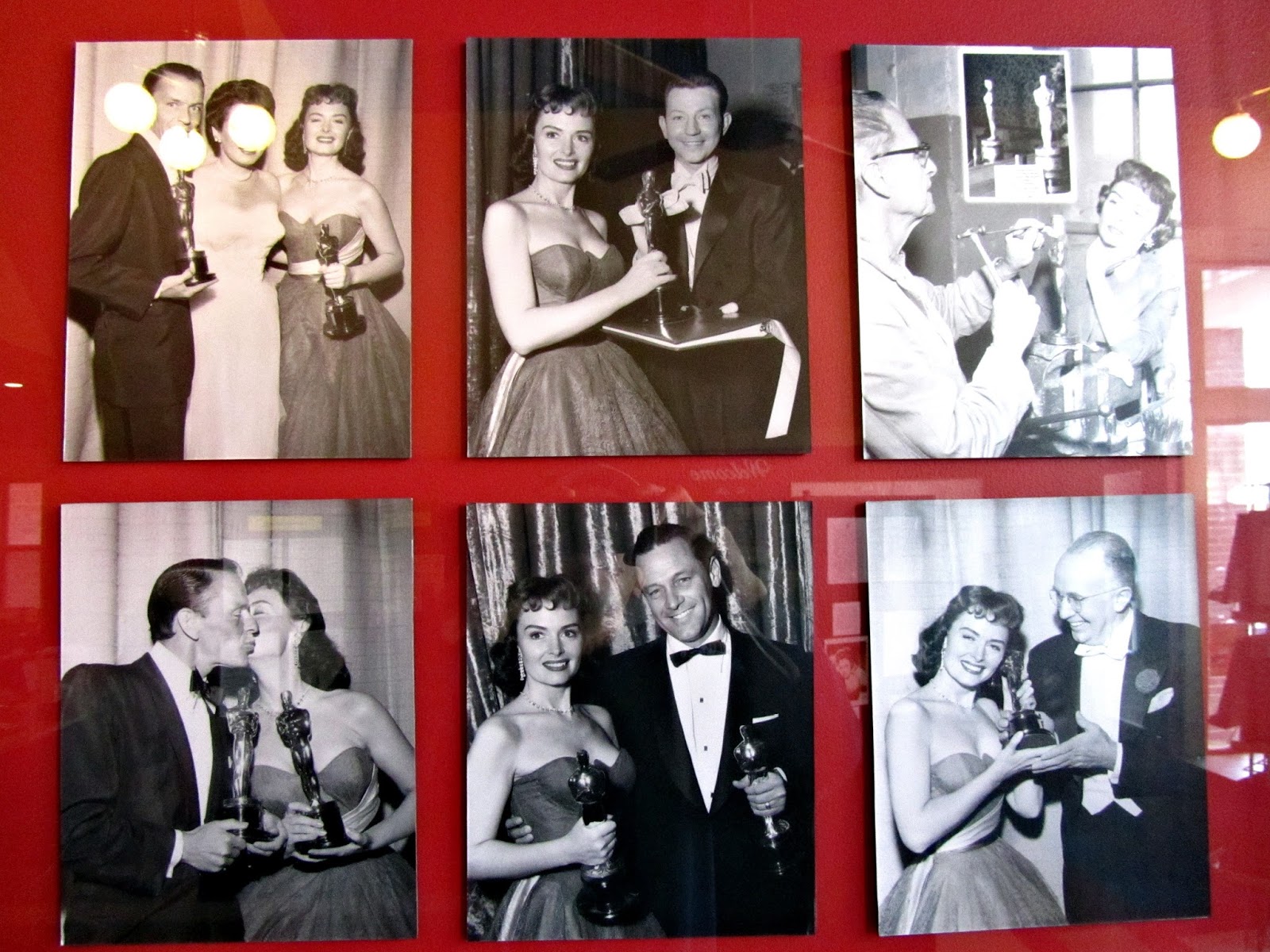 She went on to her television career with the Donna Reed Show from 1958 to 1966.  Yeah, I was a fan.  She played Donna Stone, the wife of a doctor and mother to two teenagers.  She loved the role because she could play herself.  From that show she earned an Emmy Award.
At least the Center has that. 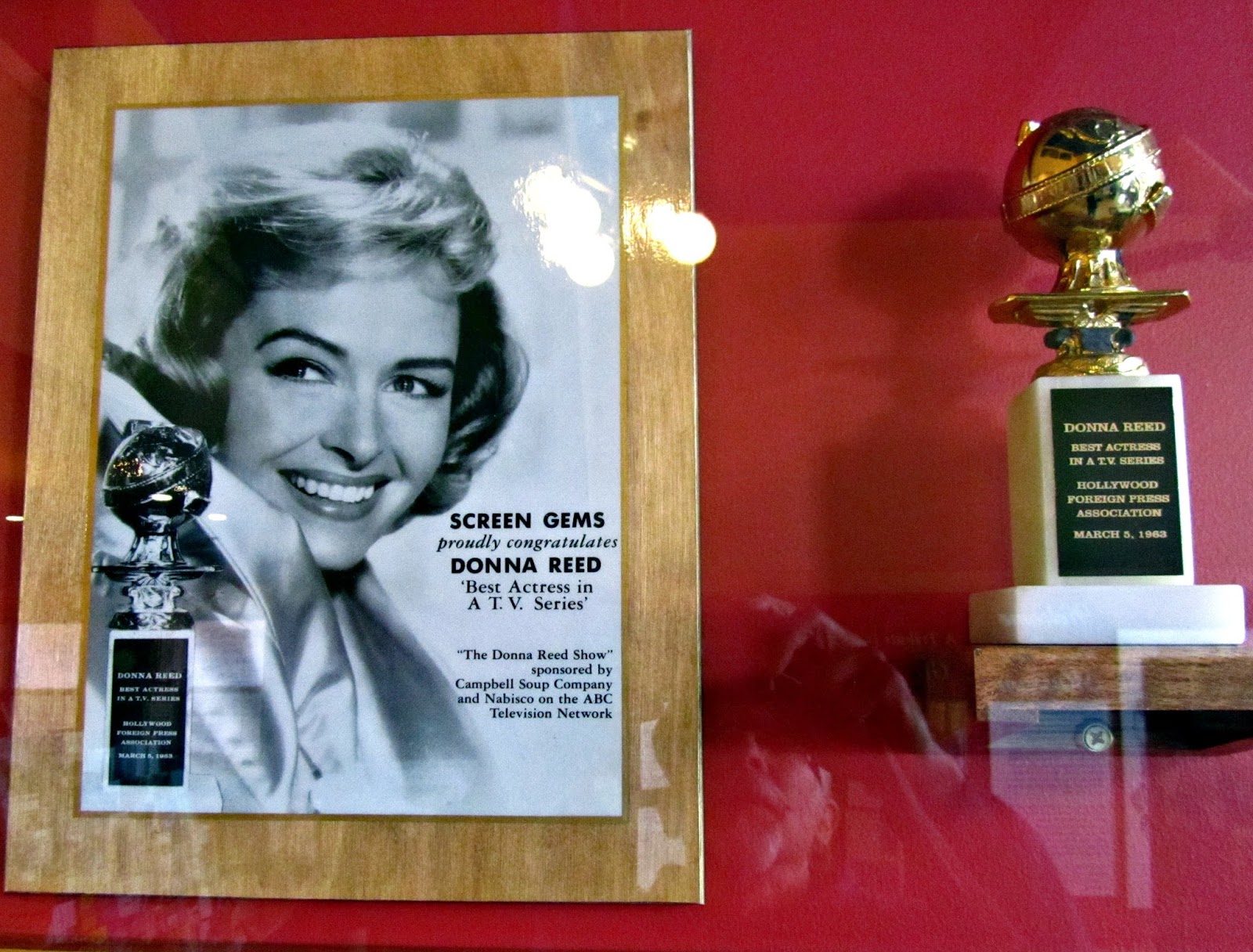 The Center had to petition the Motion Picture Academy just to get permission to have a replica of her Hollywood Star made and placed in front of the Performing Arts Center. 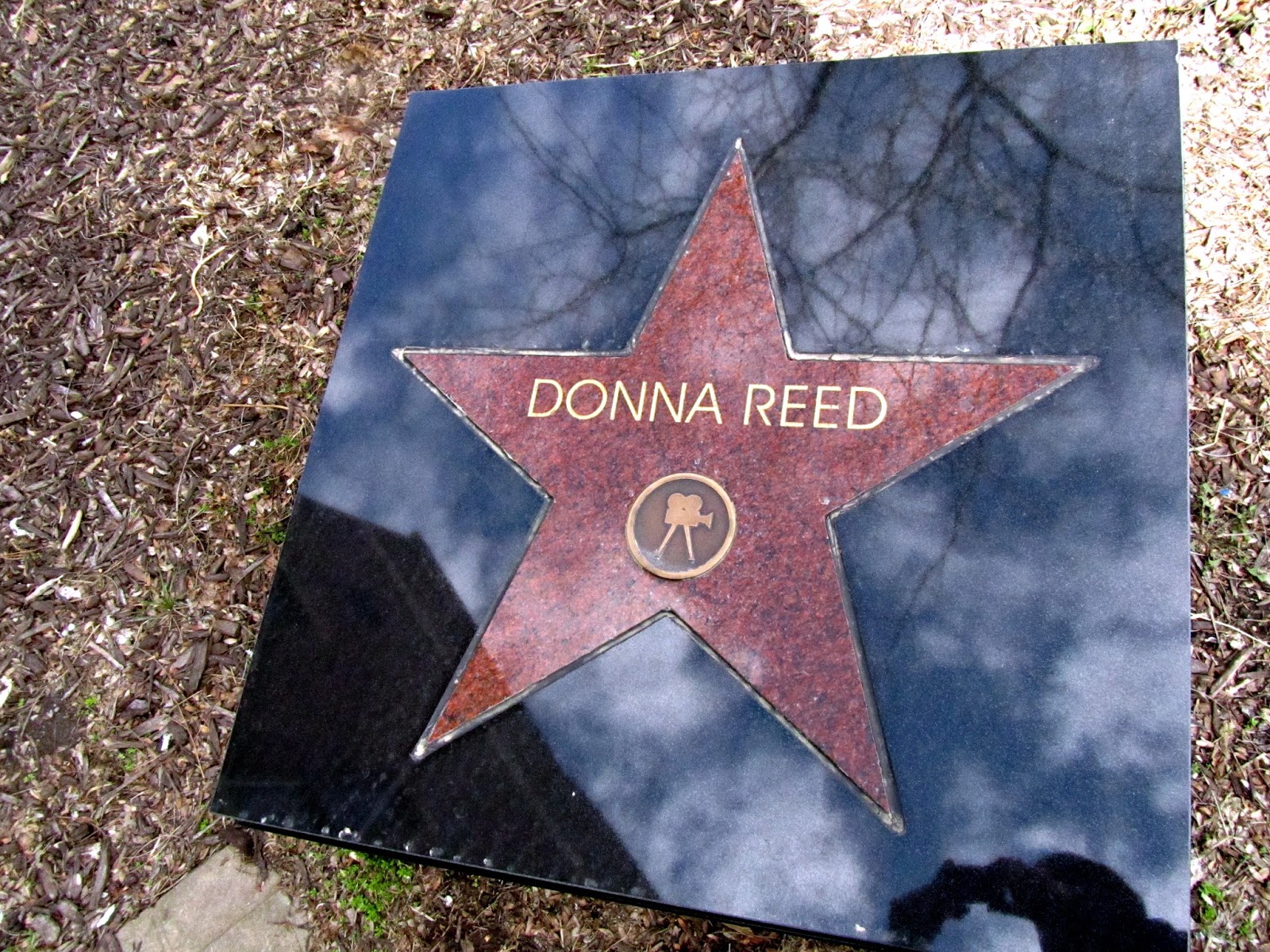 I think Denison is proud of their Iowa farm girl. 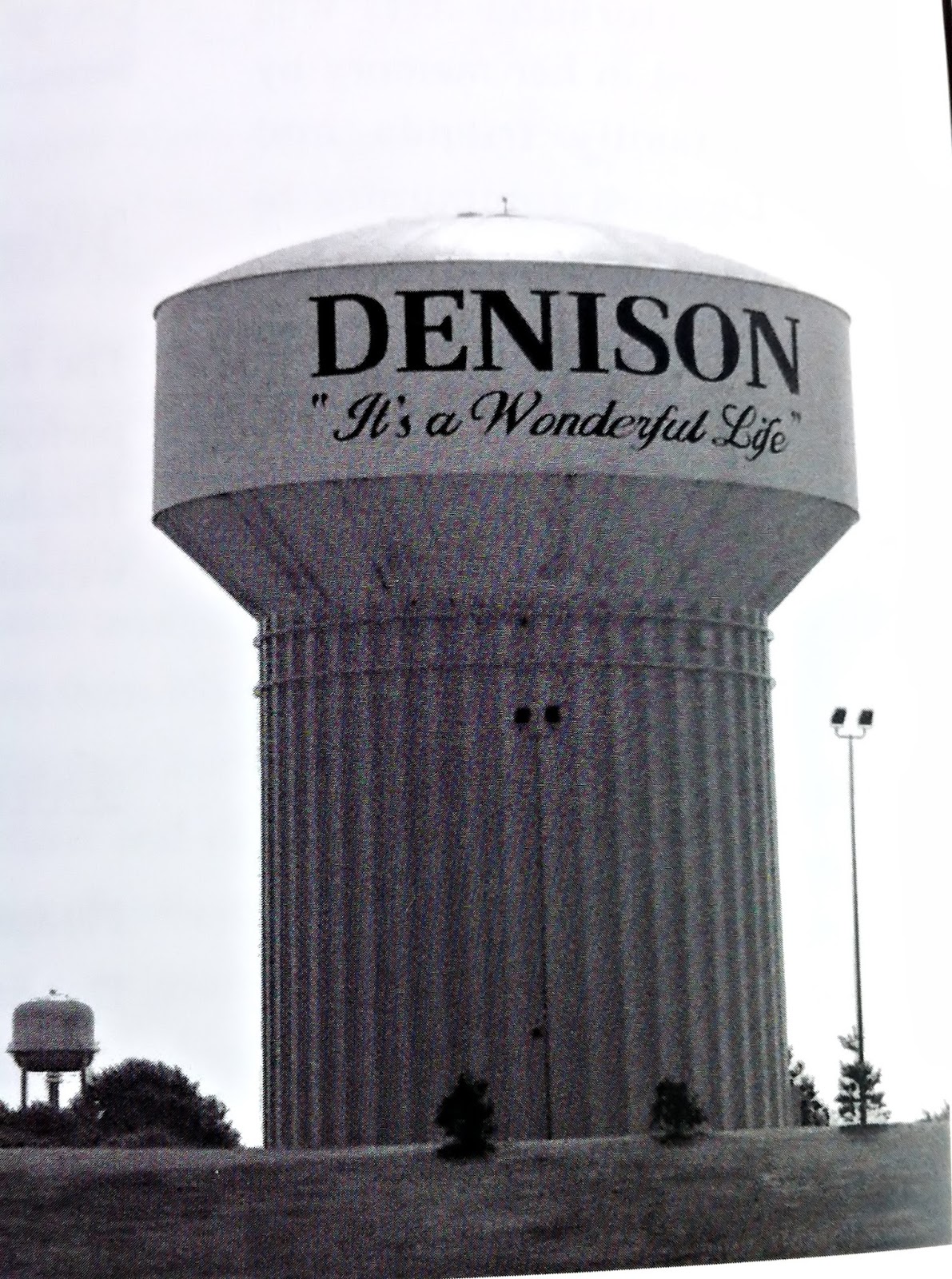 Nice to know about Denison. Thanks for sharing!

A nice story, but it is strange I only know her name but can't remember her as a moviestar I have ever seen in a cinema. She had quite a career as I read your post.

I love old portraiture, one of my lecturers gave me a photo album he bought in a antique shop, that is full of photos like these, even though they were not of famous people, that kind of glamourous atmosphere was still present. ;-)

that's really cool. i did like the description of her. she did look like she'd fall in love and love a man forever. :)

Wow! Lots of trivia here. I am guilty of having a crush on her along with a few other movie stars. I remember watching The Donna Reed Show in B&W.

This is a great story, John. I love the serendipity of it. I was too young for the TV show, but of course I know "It's A Wonderful Life." Now I'll have to check out "From Here To Eternity" to see another side of her acting.

We watched the Donna Reed show every week - loved it! Great post!!


this was a fun read...she actually sounds like an actess one could look up to.

I love Donna Reed. You have such interesting posts. I've enjoyed spending a few minutes catching up.

Such a pretty lady and very interesting story too.
Peace :)

Great find. I loved her show.

Oh, I remember the Donna Reed Show! This was a wonderful post!

I'm too young for the Donna Reed Show, I'll have to look into it and see if its on DVD or something. I did enjoy the Dick VanDyke show.