Crossing the New River this was for a long time the longest steel single-span arch bridge in the world.  Now it is number 4, but still number one in the western hemisphere. 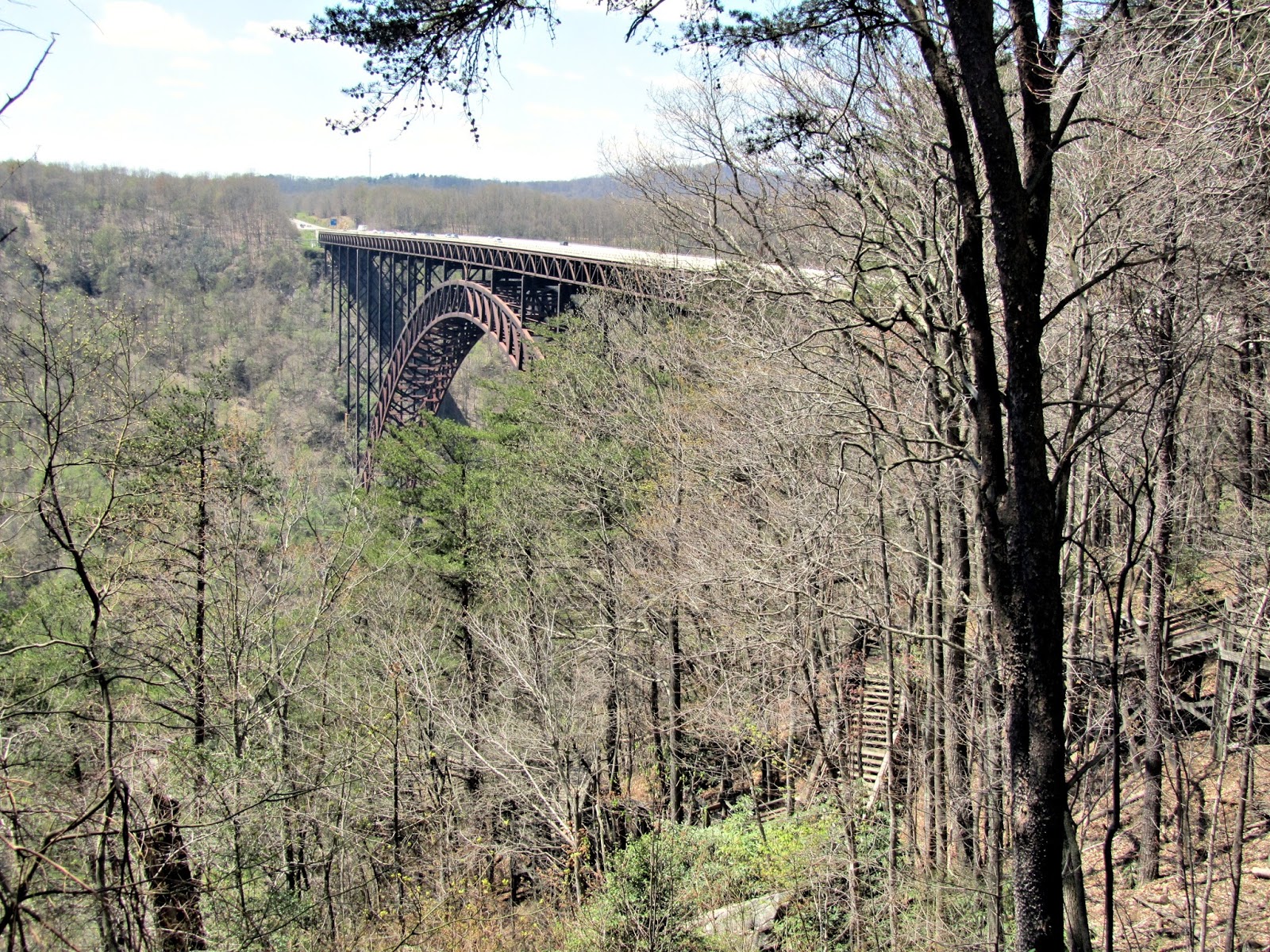 One can walk down 176 steps (yes I counted them) to get an even better view of the bridge.  You can see a portion of the staircase in the above photo.  Of course this means you have to climb back up those 176 steps.  This puts off a lot of people from making the trek.  The Park Service even had warning signs at the top advising one about not doing the descent if you had certain health conditions, followed by a long list of conditions of concern.
There was no mention of mental issues so I proceeded on. 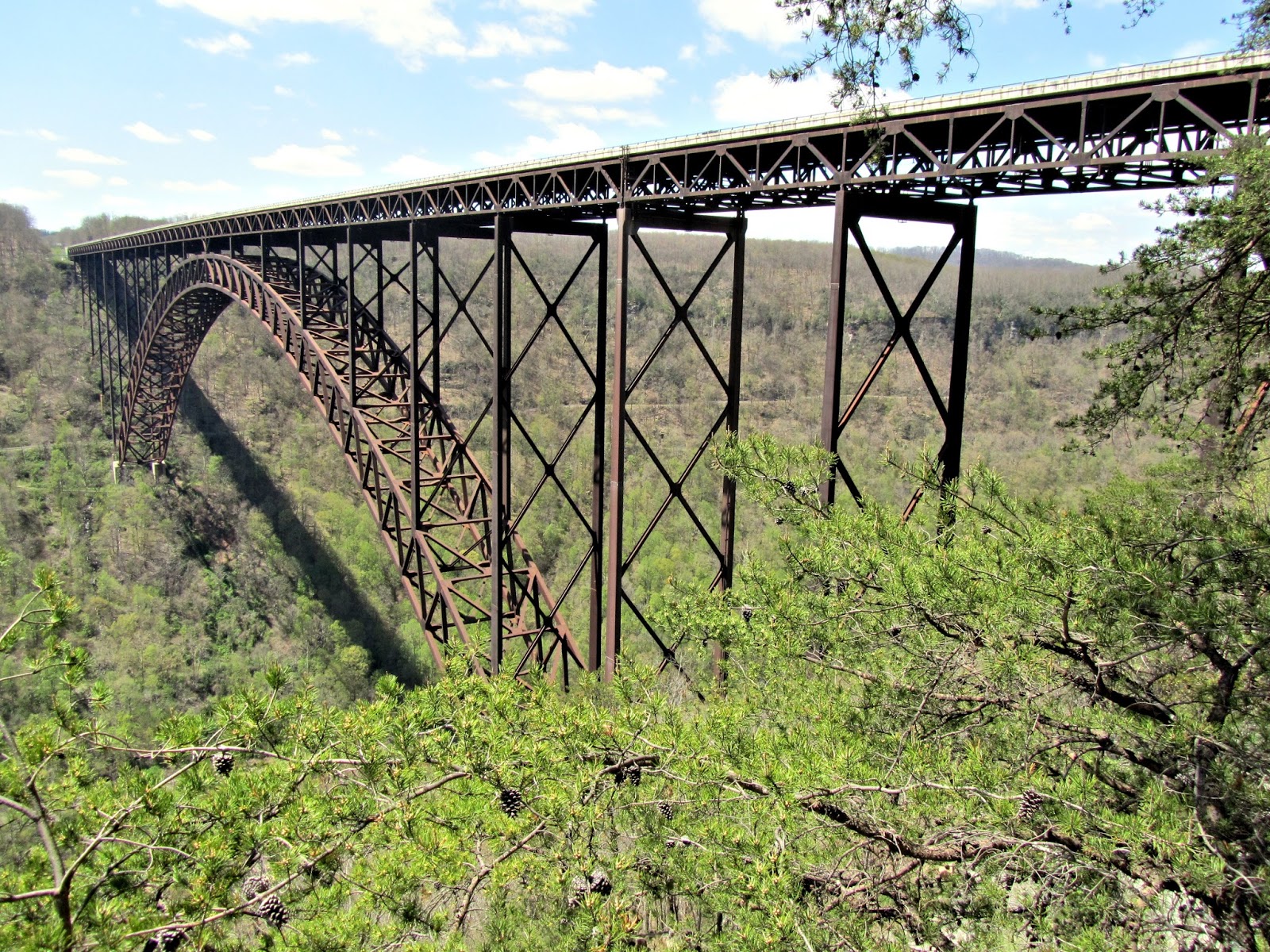 The New River Gorge National River is a popular white water rafting and rock climbing location.  The river itself is called the New River for it wasn't known to early Atlantic Coast explorers.  Whereas most rivers flow east or south, the New River flows northwestward from North Carolina crossing the Appalachian Mountains, through Virginia and West Virginia.  It eventually winds up in the Mississippi River which empties into the Gulf of Mexico.  And get this, it is the third oldest river in the world geologically.  Maybe it needs a name change. 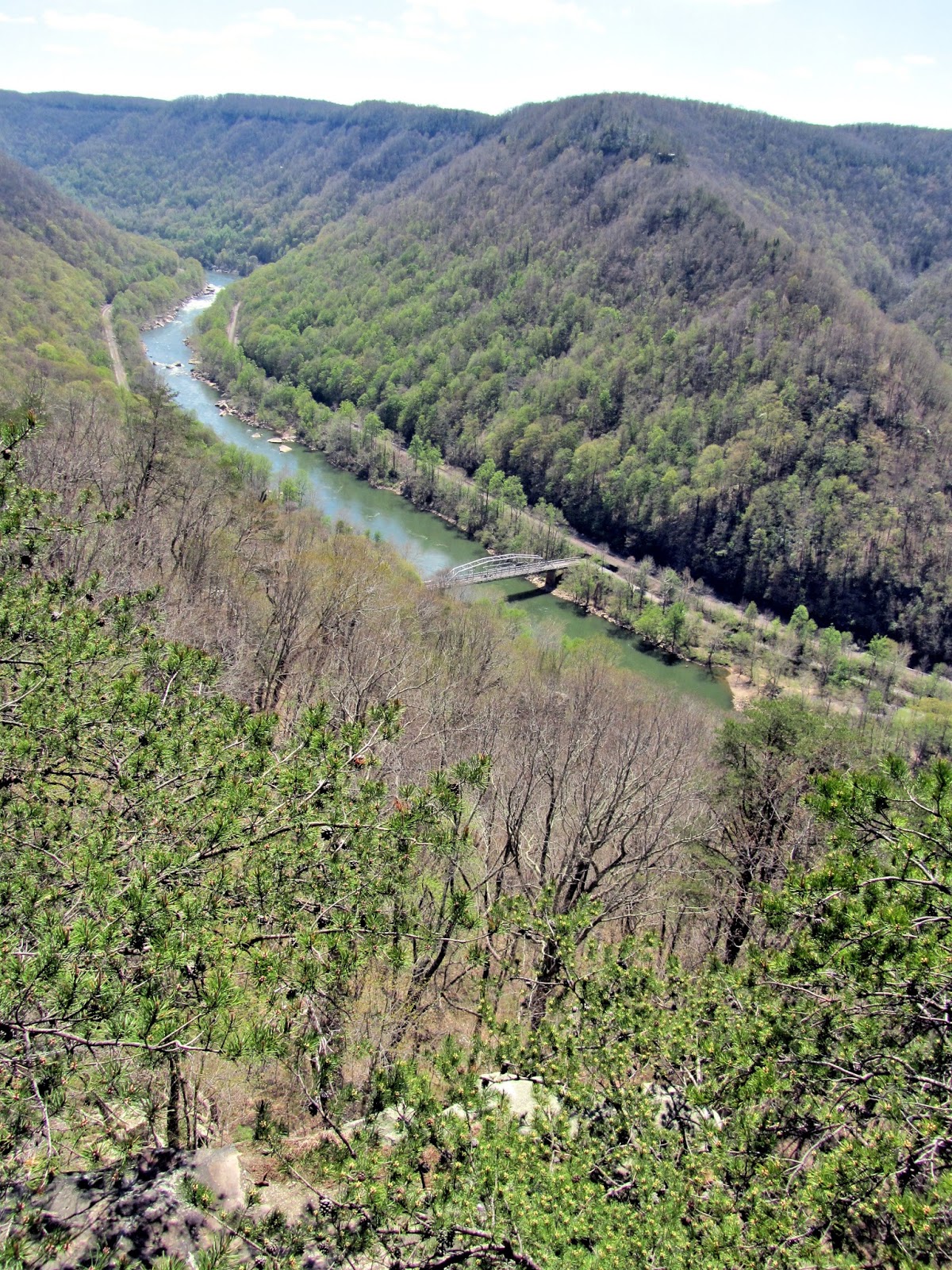 On the third Saturday of every October is "Bridge Day" and the bridge is closed to traffic.  They hold a big "Bridge Festival" where crazy people rappel down, ascend up or jump off (BASE jumping) with parachutes.  Oddly though, Bungee jumping has been banned since 1993. 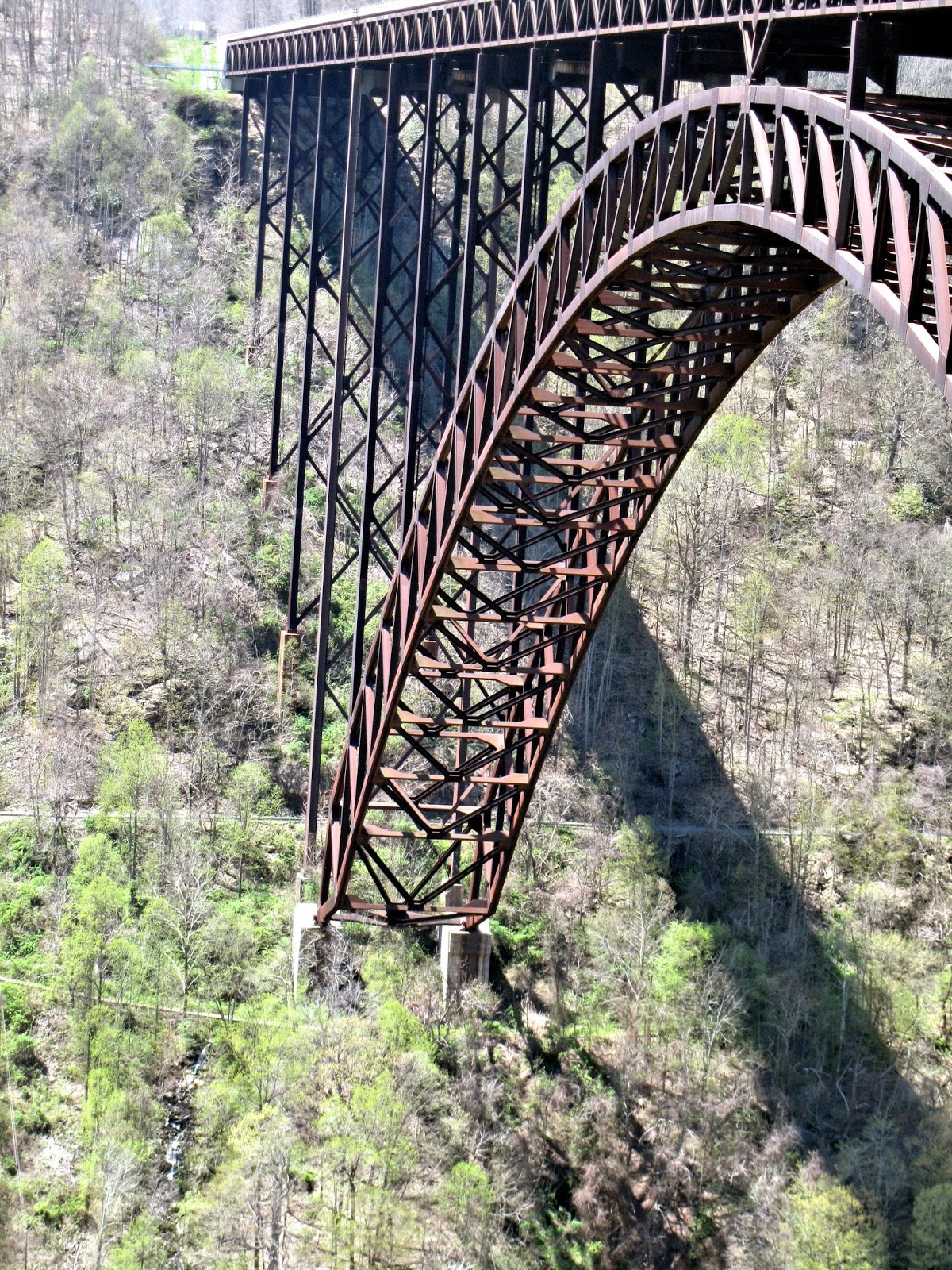 The area was heavily logged a long time ago but it is slowly recovering over the years. 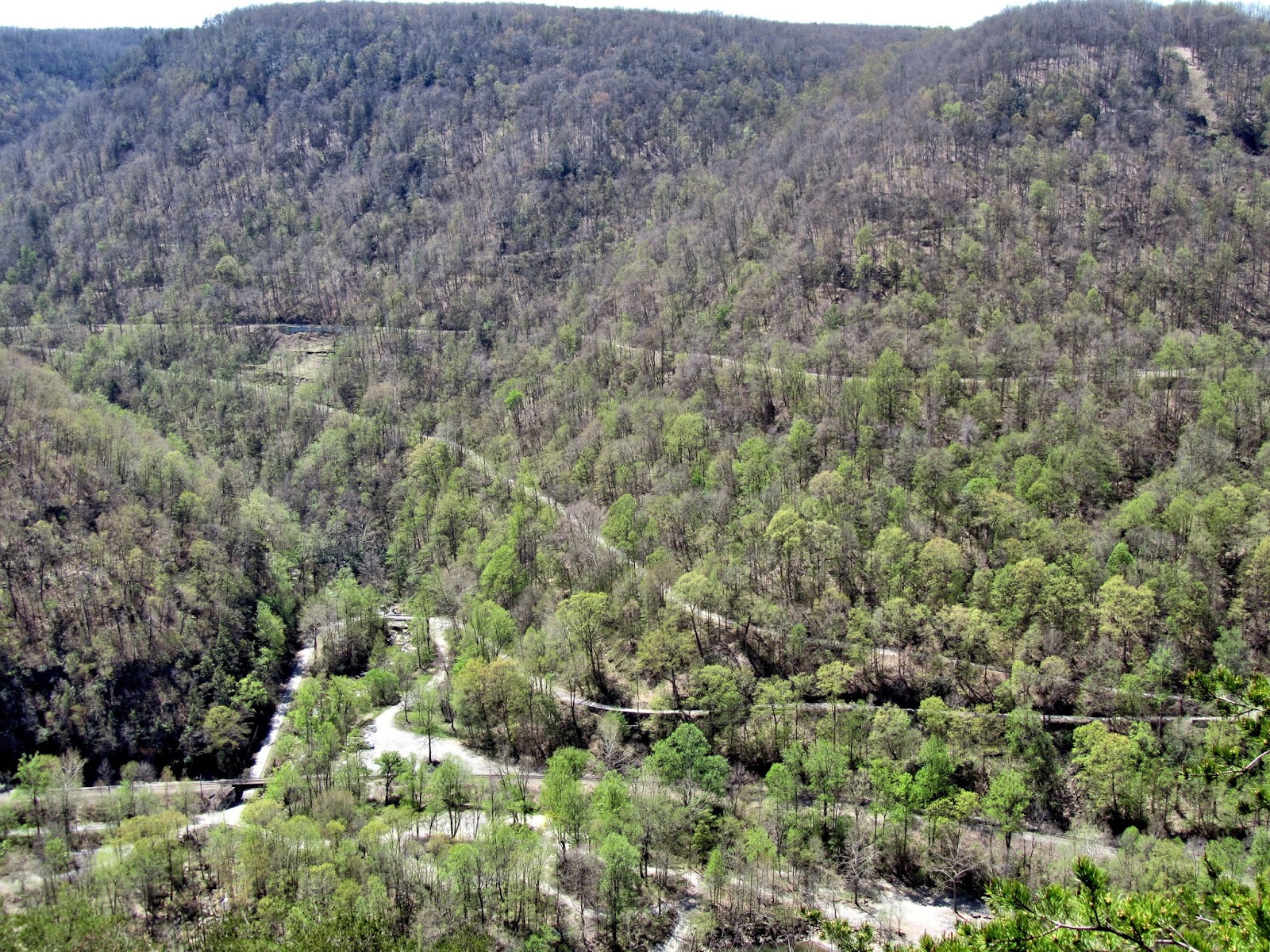 It was time to climb the 176 steps back to the parking area.   While climbing and counting I thought about my friend that I met from North Carolina a few hours earlier (the blog post of two days ago).  He would not have been able to go to the lower levels and I feel sorry for people I meet like that.  Yet I admire their desire and ambition to travel and do what they can despite their limitations.  So many people would choose simply to stay home.

I am glad you were able to go down and up again the stairs. You have a great view from below. Yes we can count our blessings that we are still fit enough to go around.

That certainly was a long trek to the bottom, but kudos to you for being in such good health! The 3rd oldest river in the world? Fascinating.

fantastic views over the bridge and down into the gorge you climbed down to John. I'd have rather done that than to have JUMPED! A quick descent would bring me no joy.

What an interesting place. I would have to agree, the river needs a new name.

a very impressive bridge! just love the huge arch! and yay for your good health. :)

Hahaha, loved the mental issues part!
But my knees would hate me for the rest of my life if I decided to use the stairs! ;-)

Thanks for taking the 176 steps down (and especially up!) so we could enjoy these great shots!

Beautiful bridge, Jon.
I am happy that you're able to climb the 176 steps.
Did Sinbad climb the steps with you? :)

gorgeous bridge, glad you took the time to share it with us.

where were you standing when you took the picture of the New River Gorge Bridge that shows the cars driving over it?