I had this place on my list of things to see just because of the petrified wood part.  When I walked into this very nice art gallery I was completely taken by the art pieces the twin brothers Harvey and Howard Kenfield had created.  This was simply a hobby of theirs they began after their service during the Korean conflict in the early 1950's.  They would go to a specific place in the U.S. (I don't remember where, for you will soon learn why) to get this particular type of petrified wood since it split so easily into long thin strands which looks just like real wood in their art pieces.  It may be hard to tell but these are three dimensional buildings. 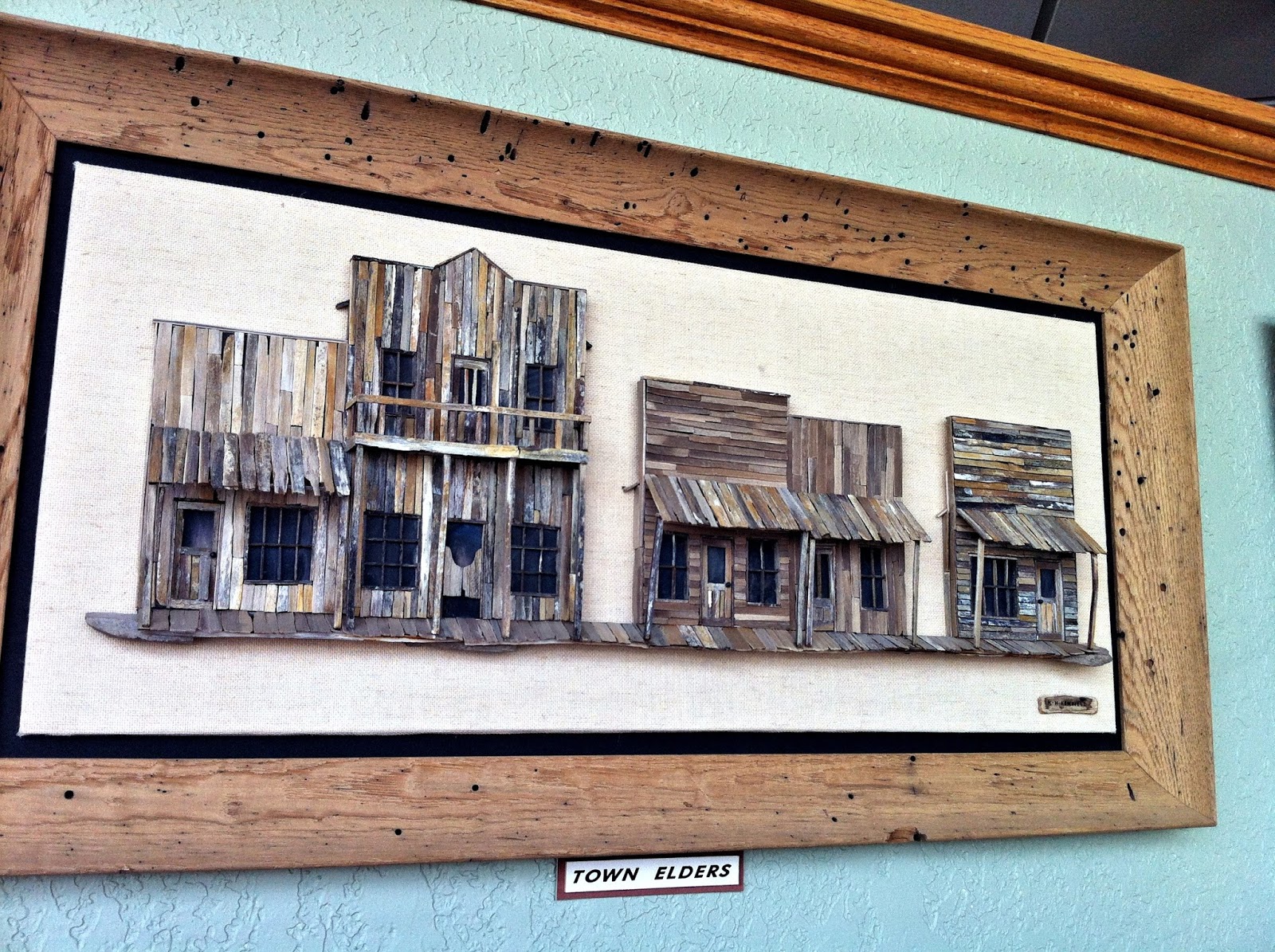 There were dozens and dozens of these pieces of work to look at and admire, but do you think I could?  Oh no.  There was this man and woman running the gallery that day and the tall thin man just hung in on me like a hair in a biscuit,  trying to show me all these other things that I simply was not interested in.  The guy was a real pest dogging me the entire time, telling me about this and that, having me look at and hold stuff,  even after I said "these are what I really want to see".  I even tried hiding from him when he went off to find something else to bring out for show and tell.  But he eventually would locate me somewhere as he had the advantage of knowing the gallery layout better than I. 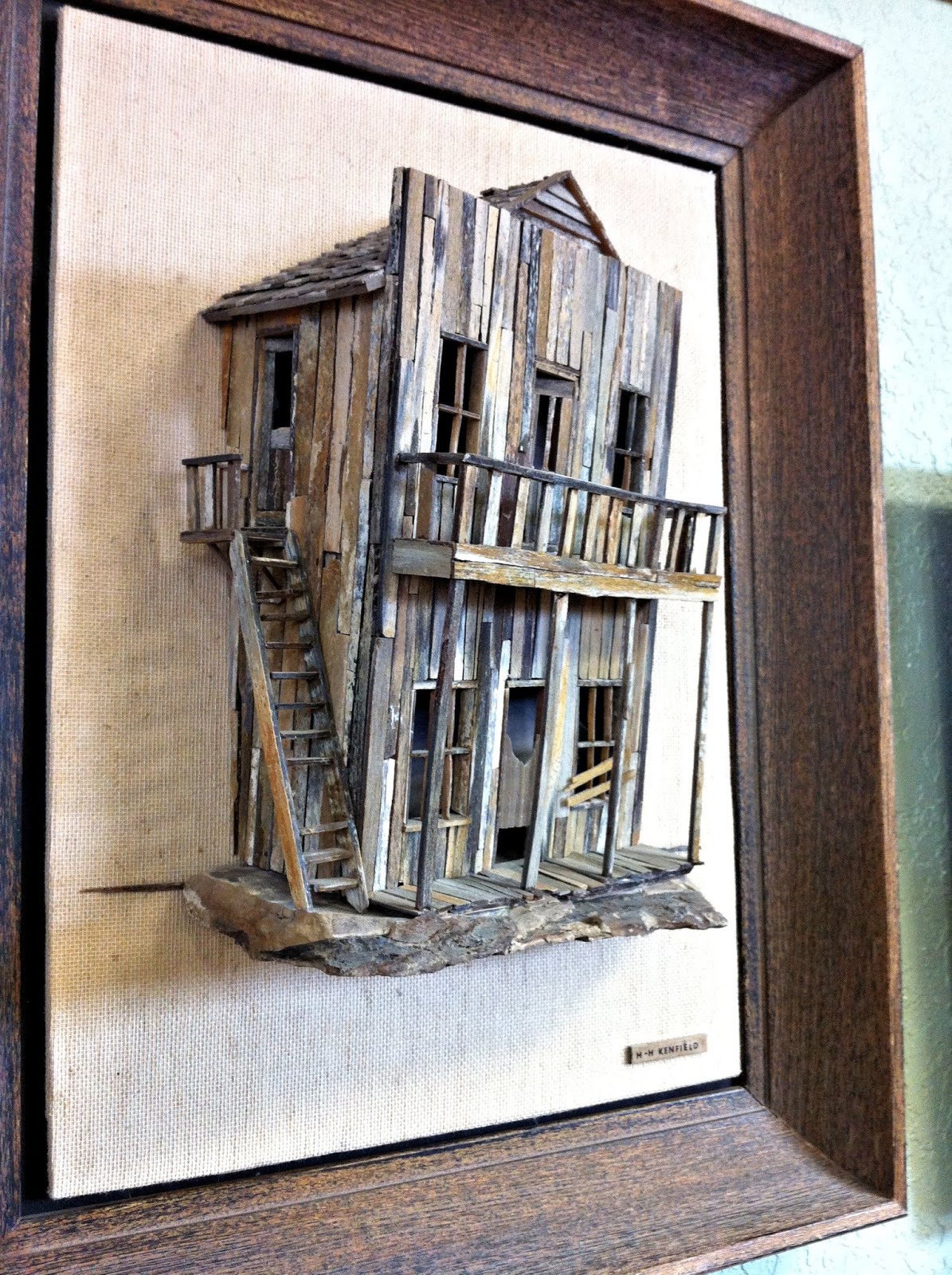 He never gave up until this unsuspecting couple walked in and he now had fresh game to pursue.  I gave up and sought sanctuary in the gift shop where I discovered these wonderful pen and ink drawings done by a local artist.  I do pen and ink myself and feel I can always learn more from other artist's style and technique.  I so wanted to look through all of her work when I heard the tinkle of the bell at the door entry.  I looked up and my salvation couple were walking out.  I was now in the gallery alone once again.  I panicked, grabbed a pen and ink note card, paid my money and left before I was discovered once again by the hound dog.

If I am ever in Ogallala, Nebraska again I will stop by the Petrified Wood & Art Gallery for not only to enjoy the brother's petrified wood art that I messed but they had a fascinating collection of fossils and arrowheads also which I never was able to see as I played hide and seek.

sheez; don't you just HATE that?! I know the situation and surely when people just end up walking out on them do they not realize they're doing a disservice? The art with the petrified wood is simply amazing; love it. Never seen anything made with petrified wood. When I've seen petrified wood it is like stone, so they've used a electrified-saw of a type to slice the stone I assume? That's incredible - you'd think a lot of weight to hang up on the wall too. Excellent; yes I loved it; smart men coming up with a new twist like that. Carole, at
snaphappyonline.blogspot.com

Fantastic pieces of work. Pity the operator took you totally out of your concentration, because of his whining. Hope next time better.

Some people can be so pushy, that is a shame. But the artworks are very original. The brothers did a great job.

You need to learn a foreign language, John. In a similar situation a friend of mine spoke loudly to a pestering salesman in Portuguese till he went away. It was very funny to see - even funnier when my friend later translated what he'd said into English!

I don't like to be hassled either. The art looks fantastic!

amazing art! i can only imagine how difficult it would be to assemble pieces of petrified wood - i'd have glue EVERYWHERE! :)

What a wonderful display. I have never seen anything like this! It is funny--my family and I have been in Ogalala twice in the early 2000's as we toured across the US. Once we broke down there and had to stay for a couple of days.

LOL I just read the accompanying story and was laughing so hard. We had some memorable experiences with the, er, interesting inhabitants of that town, too. I can SO relate. Did you eat town at the smorgasboard type restaurant in town? The food there looked like it had been made from boxed food, and canned goods. Since the main dish was never displayed, it was quite a shock when the heavily sauced meat turned out to be liver. Looking back we all laugh over the, er, interesting foodstuffs, and the waitress, who told us how much she despised tourists, whilst tapping her long red fingernails against the table top.

John,
What a wonderful find!

I learned about Petrified Wood today and making art out of it sounds fascinating.

The stairs in the second picture is a great reminder of the steps to our deck :)

The art is fantastic and I don't blame you for wanting to get a very good look. Yep, pushy people are extremely annoying!

I am getting to the point where I will tell someone to just leave me alone..have done that. I will say it nicely to begin with, but I can get hateful. And if I decide to buy something, I will find someone else to get the comission.

However, if they asked me can they help me, and I tell them I am just looking...if they tell to let them know if I have a question, and go on and leave me alone, I will go find that person and buy from them.

Even if I come to buy, I want to have a moment to myself to consider the options...

Fella might have had Asbergers, they have a hard time understanding why everyone else isn't as fascinated/excited with the same things as they are. My daughter's boyfriend has this obsession with her needing to buy new spatulas because they aren't they same as his. Amongst other "adorable" obsessions...I don't know how she does it!