In addition to what I mentioned yesterday, there was a railroad display with a 1901 steam locomotive, an 1871 coach and a 1912 caboose.  There was a 1860's log cabin settlement, antique farm machinery and auto exhibit (closed while I was there), a rural schoolhouse and church, 1893 farmstead and a Pawnee Earth Lodge which I'll show later.
But these two captured my interest. 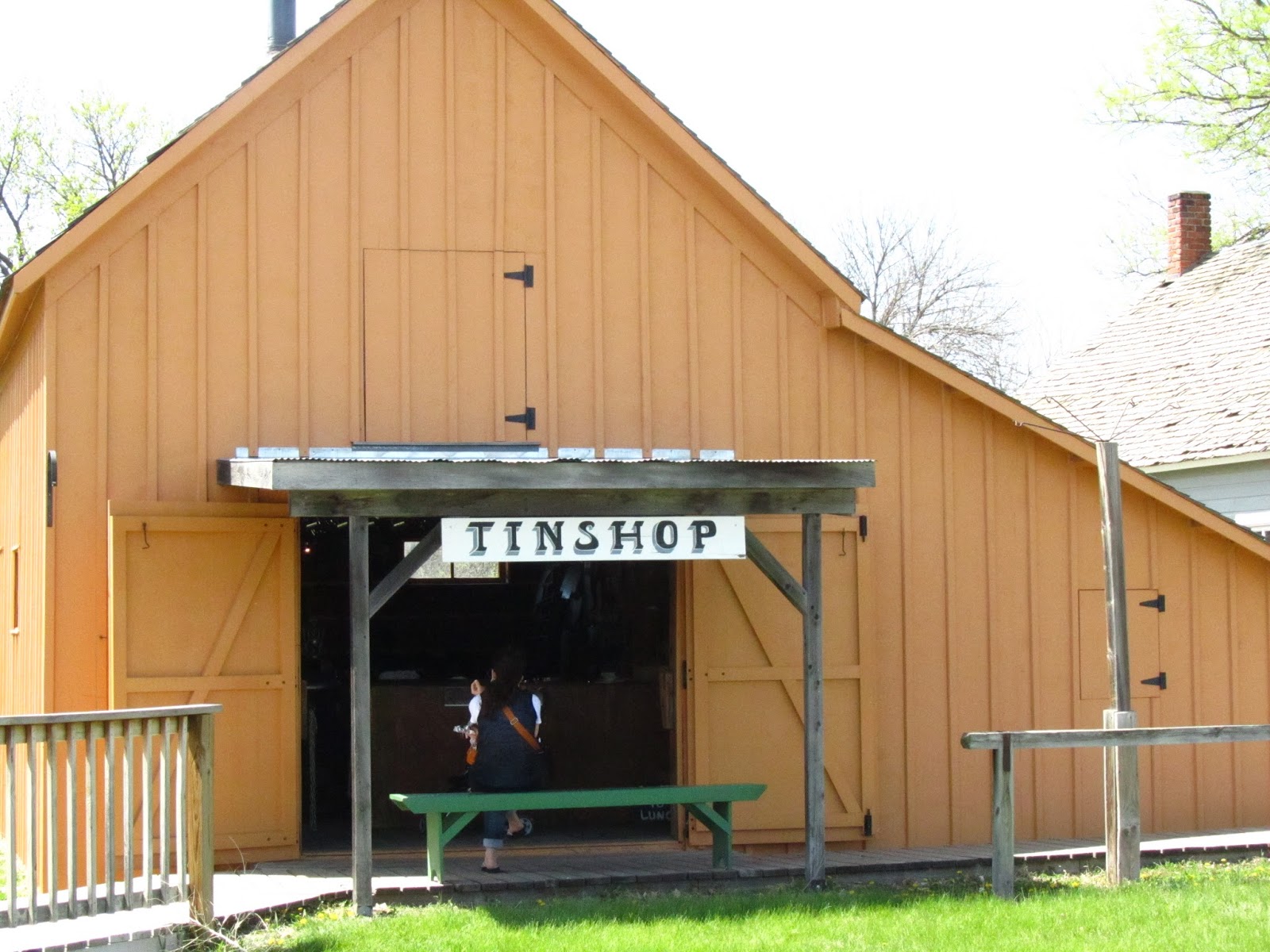 This was so neat, I was simply captivated by it all.  The man's name is Loren Miller and he made various items from tin.  Here he is wiping clean some tin cups he just finished testing to see if they leaked, and they were for sale too. I had to have one - $10.  He was so nice to talk with and I learned that he got paid to be there doing what he loved to do. 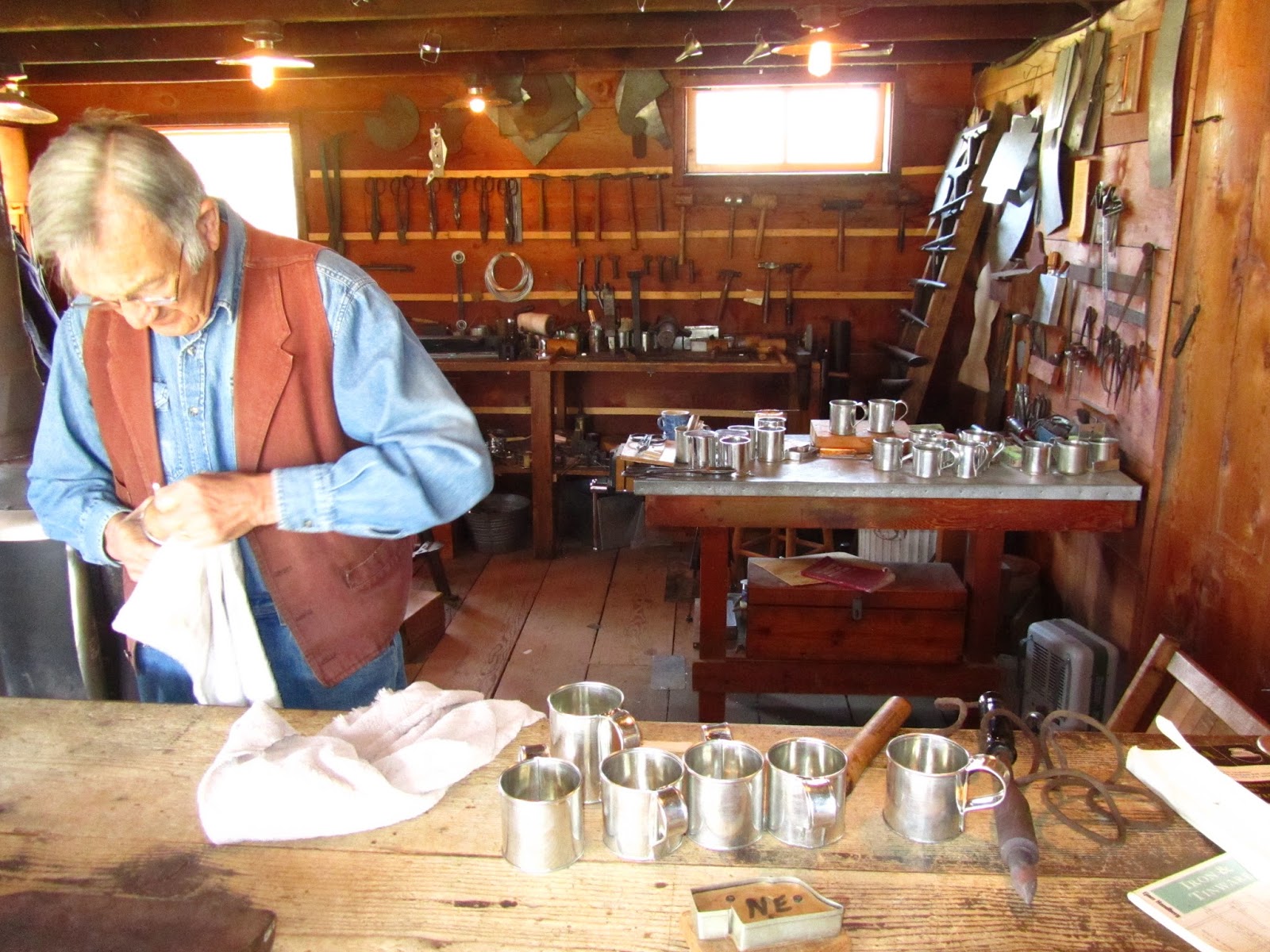 I told Loren I was going next door to check out the blacksmith shop.  That didn't last long.  The noise from the hammer pounding on the anvil was more than my sensitive hearing could manage.  I was back with Loren in less than a minute. I told him I'd never make it as a blacksmith.  He agreed with me saying he wouldn't be able to handle the noise either. 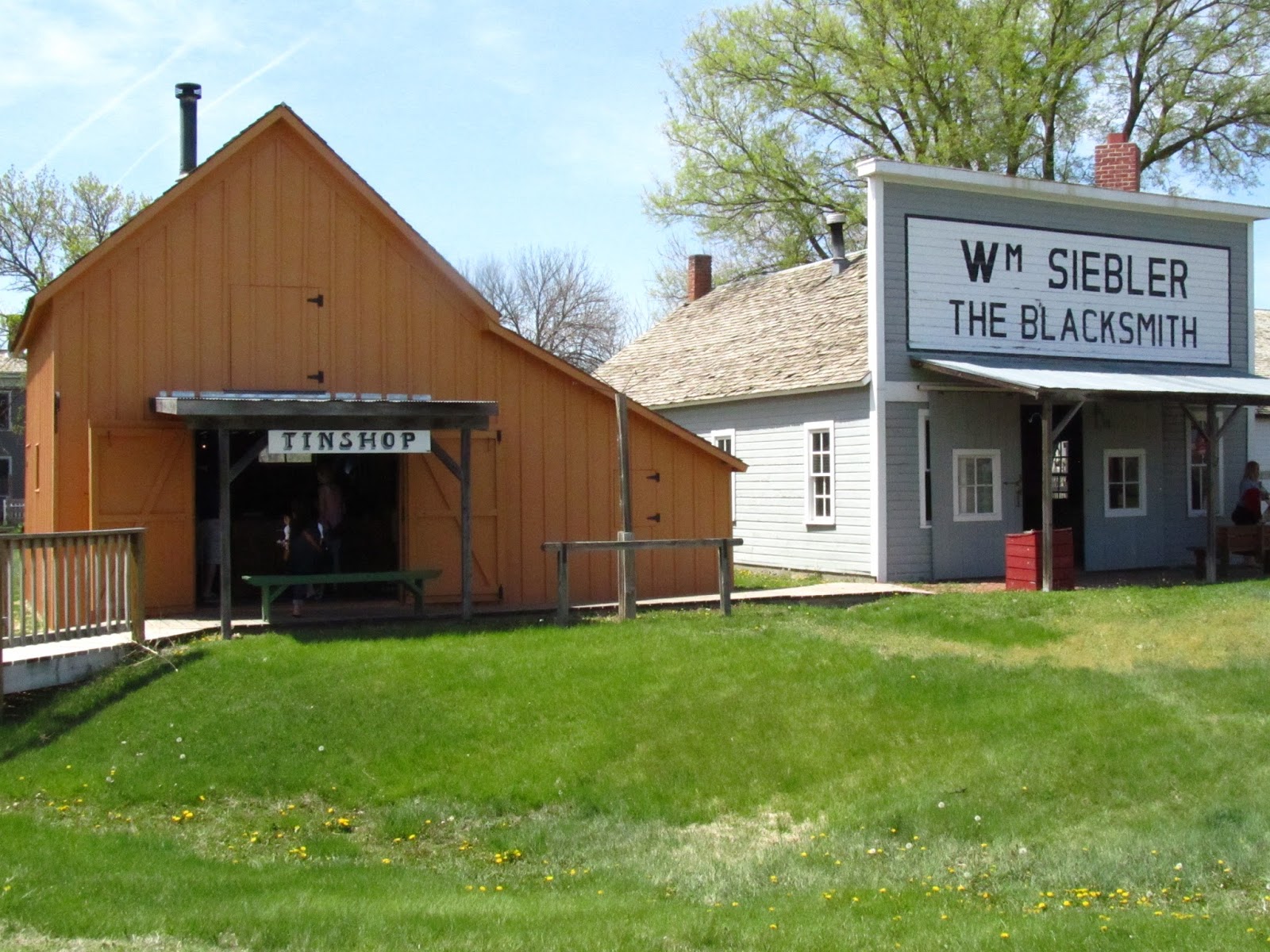 A few doors down was this shop.  No tourists were there, so I stepped inside. 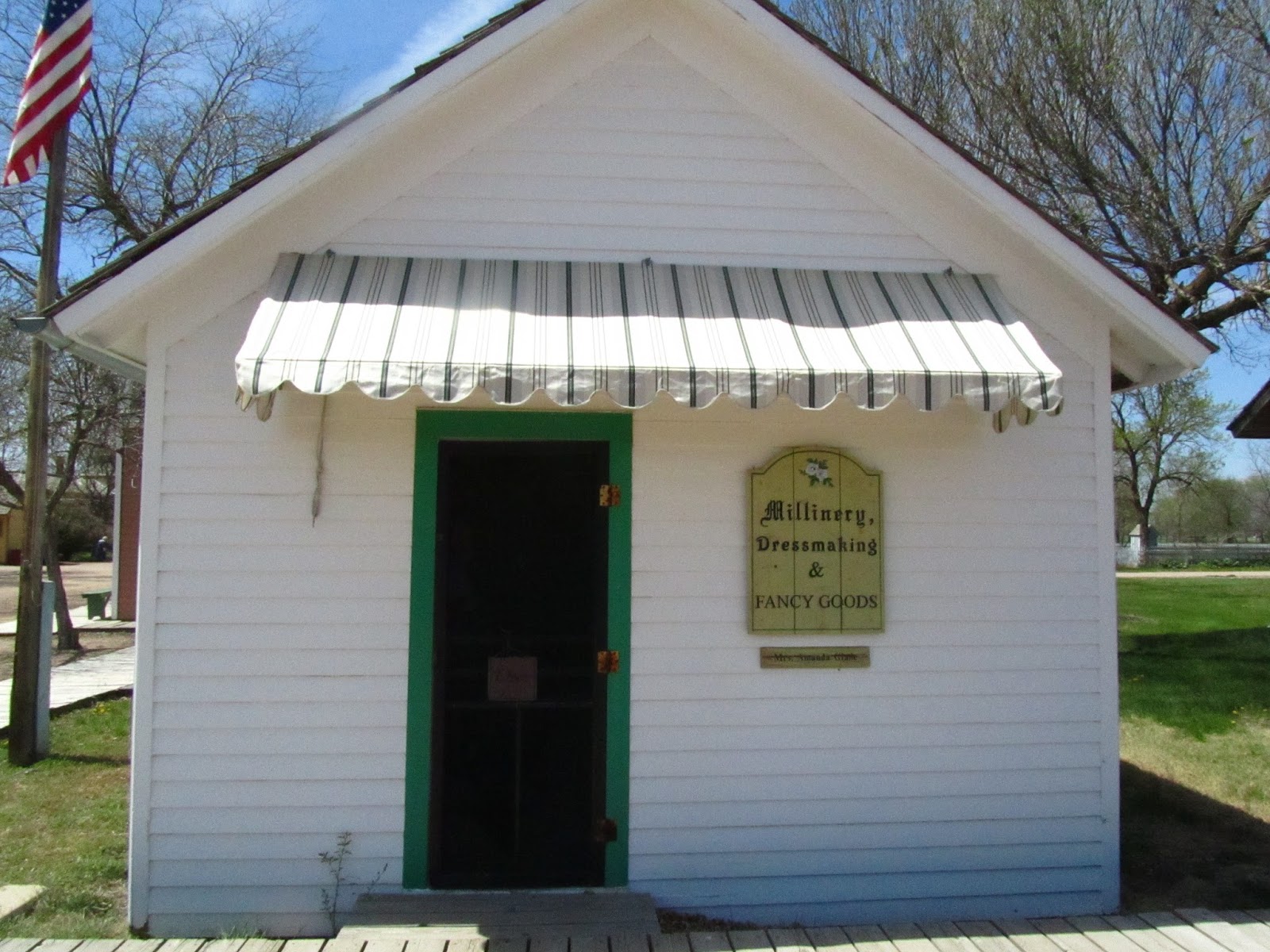 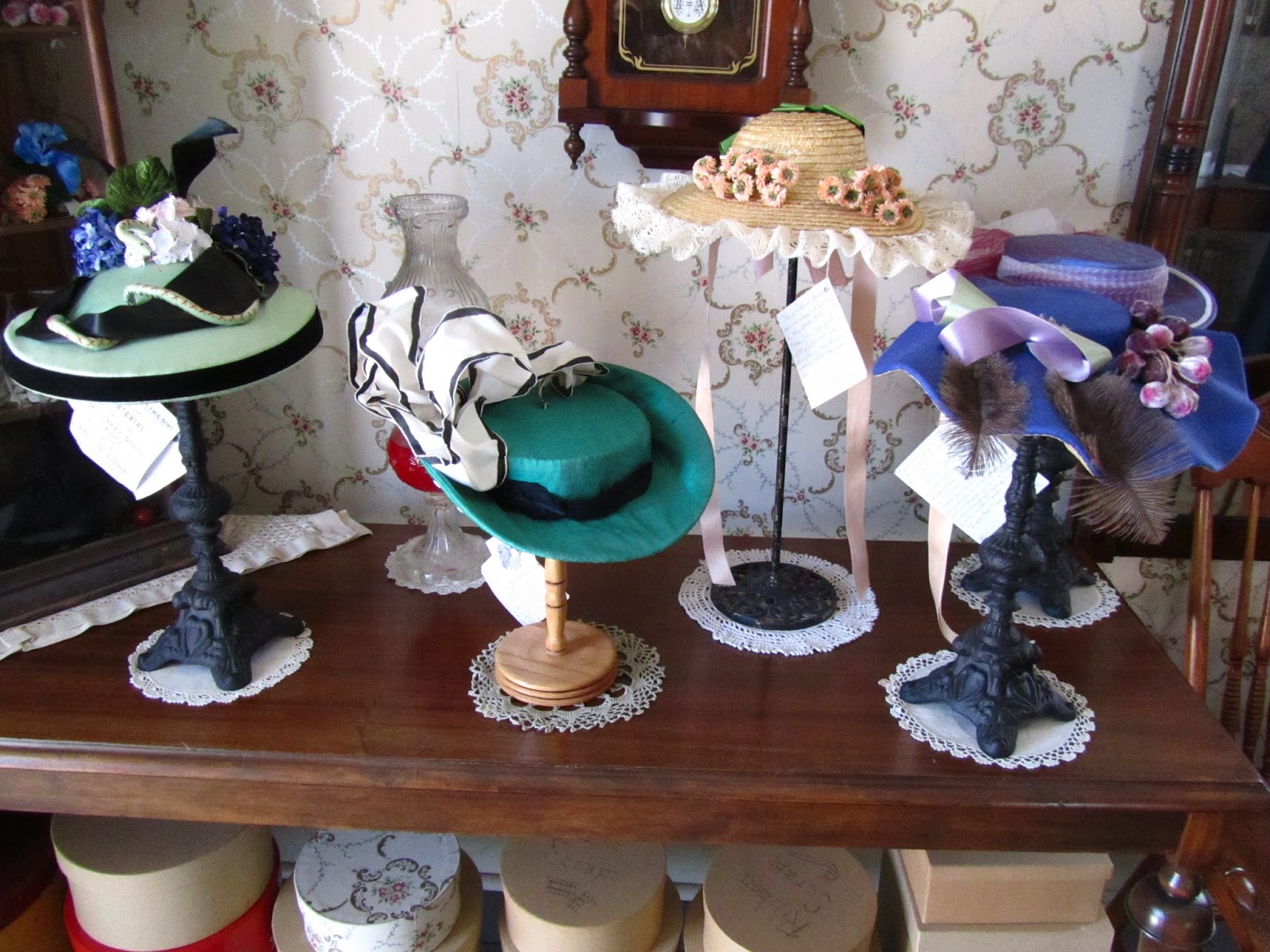 These are all handmade and for sale with very reasonable prices like 20 to 30 dollars.
(I can't locate my notes. This is coming from my memory, for what it's worth) 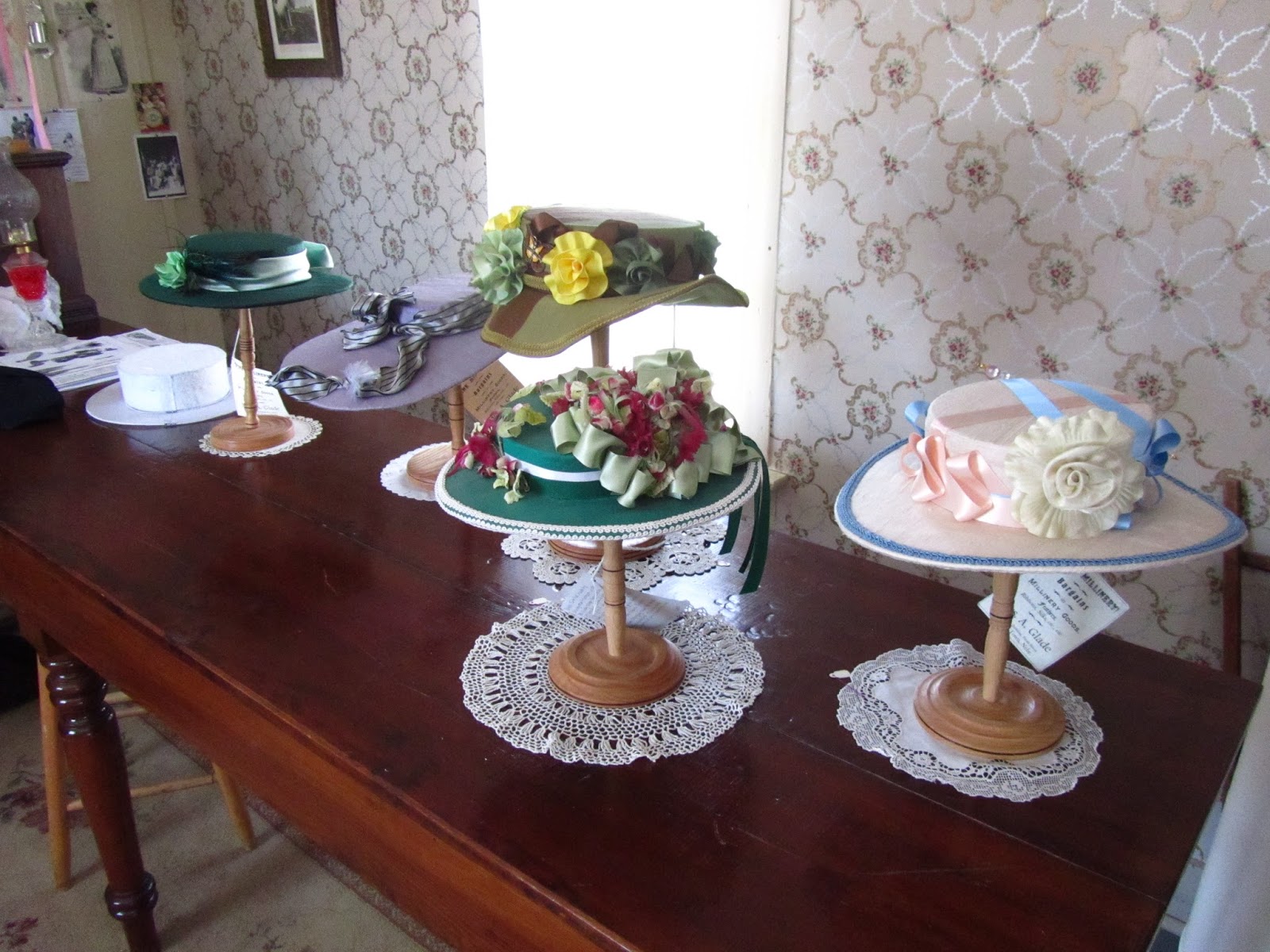 This is the lady who makes them and I have forgotten her name.  I only remembered Loren's for I had him etch his name on the bottom of my cup.  She told me this hat was destined to go to England.  Again my missing notes, but I think the customer was visiting the museum and told her what she wanted and to ship it to her when finished.  I am wanting to think the price on this was around $50.
Isn't that cool looking? 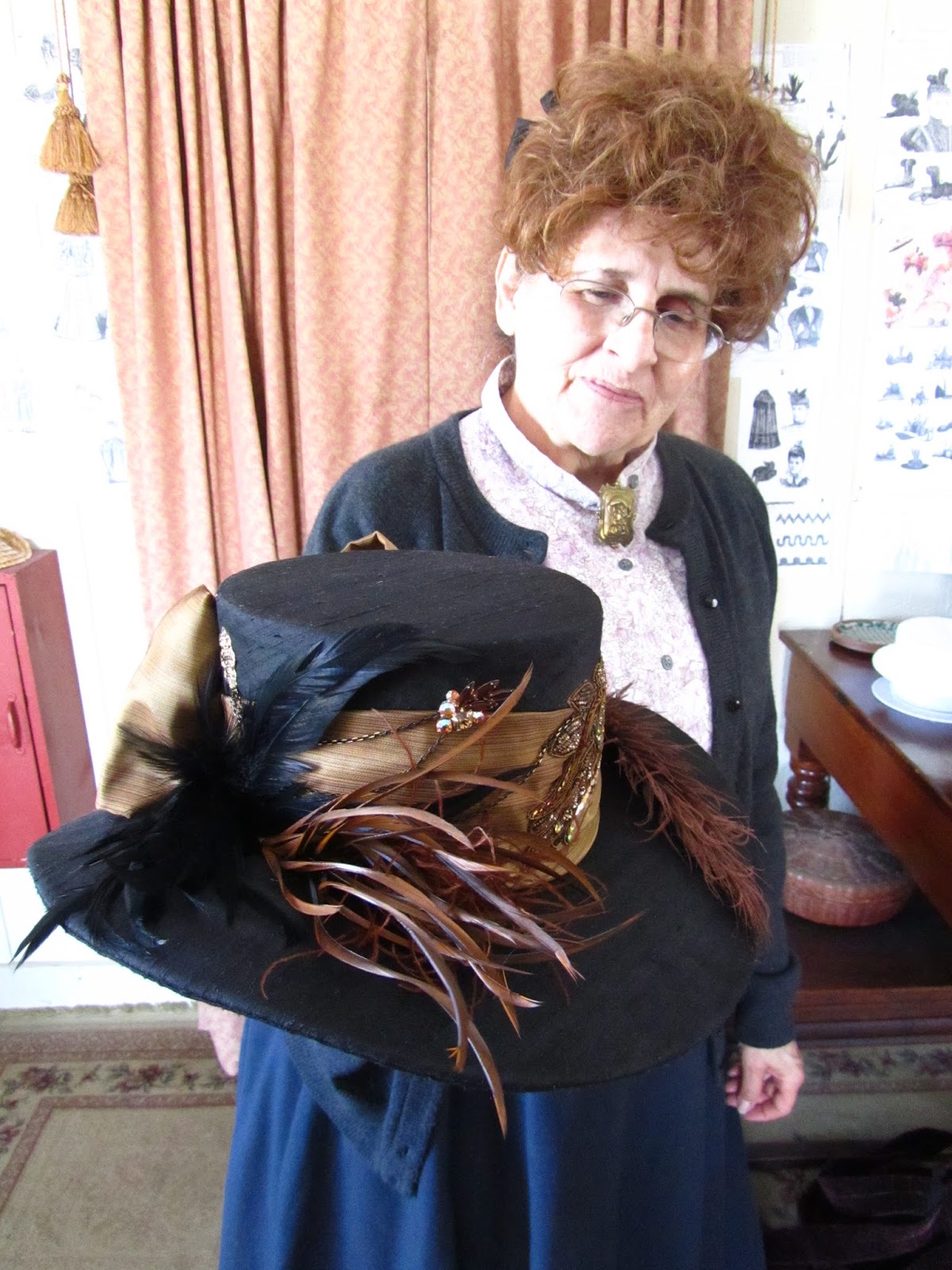 We visited for awhile and I remarked how it was sad that the wearing of hats by ladies had become a lost piece of fashion wear for women.  But even more so was that her craft in creating such beautiful pieces of work could very well someday be lost forever.  She agreed wholeheartedly and had a lot to say about the subject, but again...those missing notes.  Grrrr...


One other interesting shop was the lumber mill.  It was popular with a large crowd gathered around inside the shop.  All the power tools in the shop were driven by huge belts on large overhead pulleys where he would shift the belt from one pulley to another depending on the piece of equipment he wanted to run.  It had the wonderful sawdust smell but was very noisy in there with the wood worker yelling to the crowd be heard over the sounds of the shop. I didn't linger.
And yep, I forgot to take a picture.

As I was writing this I recalled the newspaper/print shop the next door down.  There the young man was playing the part of the printer, doing his thing when as he was showing me this wood case that held print type.  He was leaning on the glass top of the display case and the glass shattered sending flying shards of glass everywhere and down inside among all the antique print items on display.  We stood there in silence.  Now I know I took a picture of that but I don't have it.  I think I lost some of my pictures of Railroad Town including the above wood shop.  I bet I used the iPhone and not being that familiar with it, well...that's my excuse and I am sticking to it.

I would love to visit this area. I know you will treasure the cup. Those hats are truly works of art.

oh that would've been a fun break in a day on the road John. I'd have wanted one of those neat tin cups too; great for my backpack cuppas.

I hate it when I lose photos! Grrr for sure! And I'm sorry you've lost your note.

I've watched a blacksmith work in an outdoors forge, which was fascinating and probably not nearly as noisy as watching the work being done inside. I like investigating thee sorts of places.

Wow, what a neat place. i would love to visit there.

ooh, the glass breaking would be tough to clean up and replace. the tin cups are really, really neat! i have NEVER liked hats, but those are incredibly beautiful and inexpensive, too! i'd have been tempted to purchase one just for display - some look like cakes! :)

Neat shops.
Handcrafted pieces of work rate high in my book and I am willing to pay good money for them, as are millions of others.
Just curious: Have we gotten involved in too much speed, which can be anti-hat?

It's wonderful to watch craftspeople at work!

I love visiting places like this...love that stepping back in time feel.

There's quite a bit to see. I like the tin cups.