I apologize to my foreign followers who are not familiar with the television show.  It began five years ago on our History Channel, cable TV.  Mike Wolfe (on the left) is the originator of the program which came about from his lifelong (ever since he was 4 years old) of collecting old things which turn out to be highly collectible items in the eyes of those who collect, thus turning a good profit in picking up someone's "junk" for a few bucks and selling it to a collector for many times more.  His partner in all of this is Frank Fritz (on the right) who the two have been friends ever since the 8th grade.  In the center is Danielle who searches out leads online and through various contacts.  The boys travel around the country following up on these leads most of which are old barns, warehouses and people's homes some who are borderline hoarders.  Most of the people they visit have either been collecting all their life and need to thin their collection down, or Dad has passed away and the kids are left with all this stuff to get rid of and lastly some are found simply by "free-styling" as they call it - just aimlessly driving the back roads of America until they come upon someone's yard full of junk where they pull in, introduce themselves as pickers from Iowa and hand the owner a list of things they are interested in.  As for reality shows, this one isn't too bad.  Most reality shows are obviously heavily 'scripted', include a lot of drama and some a lot of fighting and swearing.  Because of that, I watch only two so-called reality shows, this being one of them.  Okay, on with the show.

As I pointed out before, this is the new building on the lot as they needed room to expand.
Additionally they have set up another store in Nashville Tennessee a couple years back. 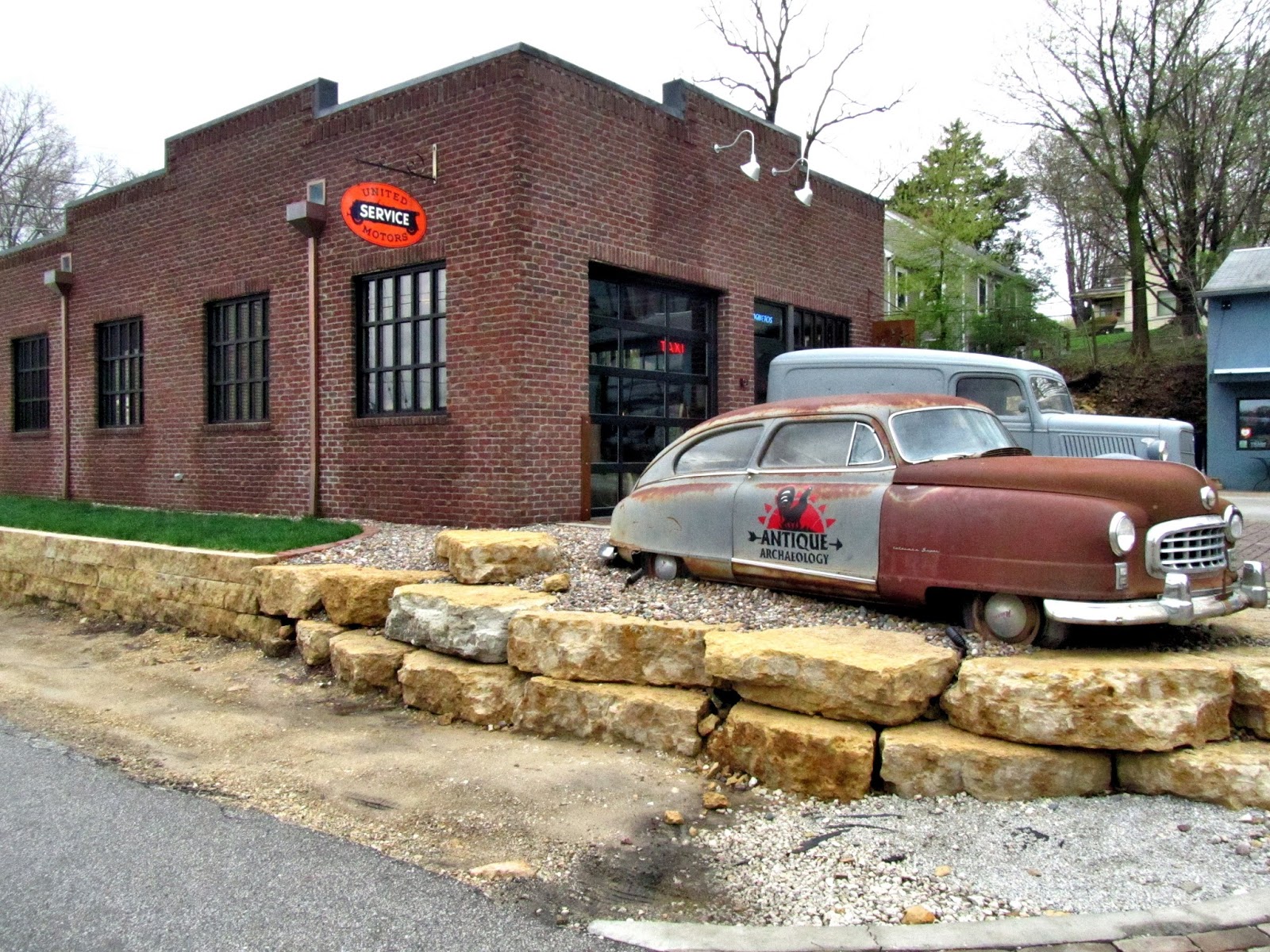 This 1950 Nash was in place long before the television show began production.
What a cool looking car. 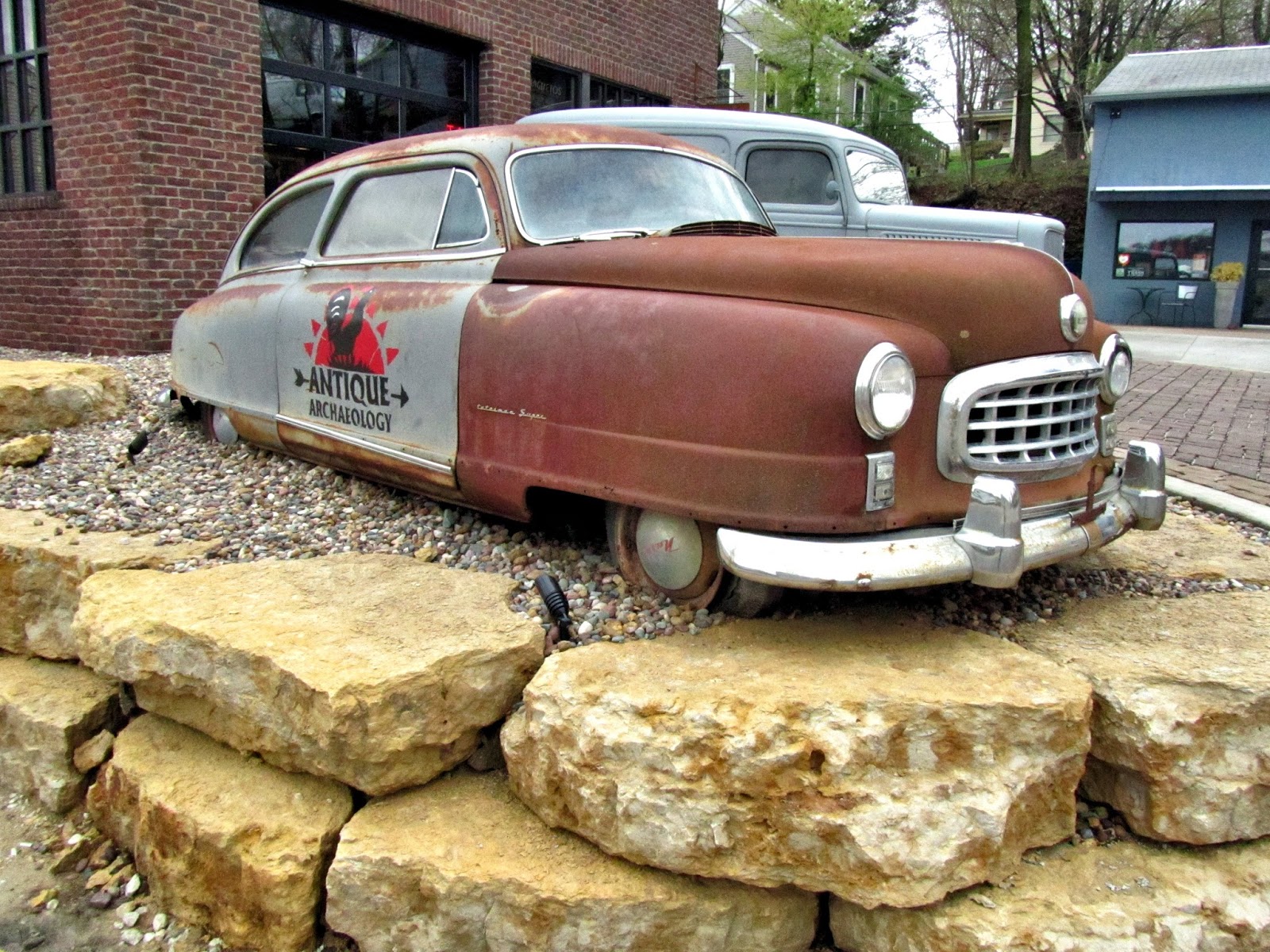 Inside the new brick building it was all nicely done with some of the more collectible items on display.  It was more like a museum.  Old motorcycles and bicycles are of particular interest to Mike.  Frank is more into antique toys, oil cans and old signage. Notice the bevy of t-shits for sale in back. 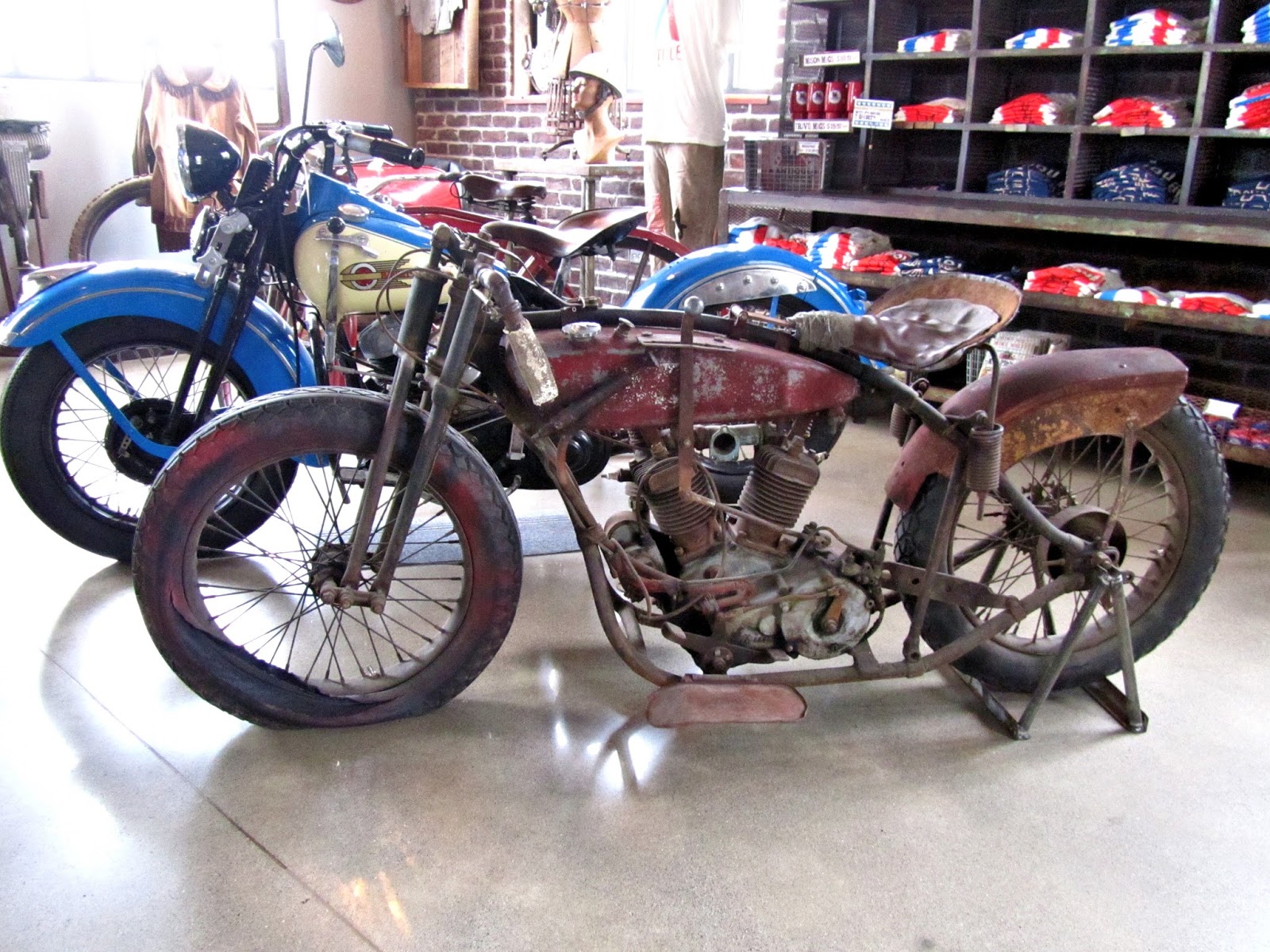 Von Dutch (Kenny Howard 1929 - 1992) is a legendary artist and pinstriper doing art work mostly on motorcycles, cars, helmets and the like.  His work is highly collectible.  For example, a 100cc dirt bike that belonged to Steve McQueen with his artwork sold at auction for $43,000.  A sign he created for his shop went for $18,720.  Or how about his toolbox for over $300,000.  So you can imagine the bargain Mike got when he discovered Von Dutch's motorcycle he built from an array of parts from different motorcycle brands then fitted a 36 horsepower Volkswagen engine into all for the price of $21,000...yes, he "stole" it.  You can see some pinstriping on the fender, forks and gas tank. 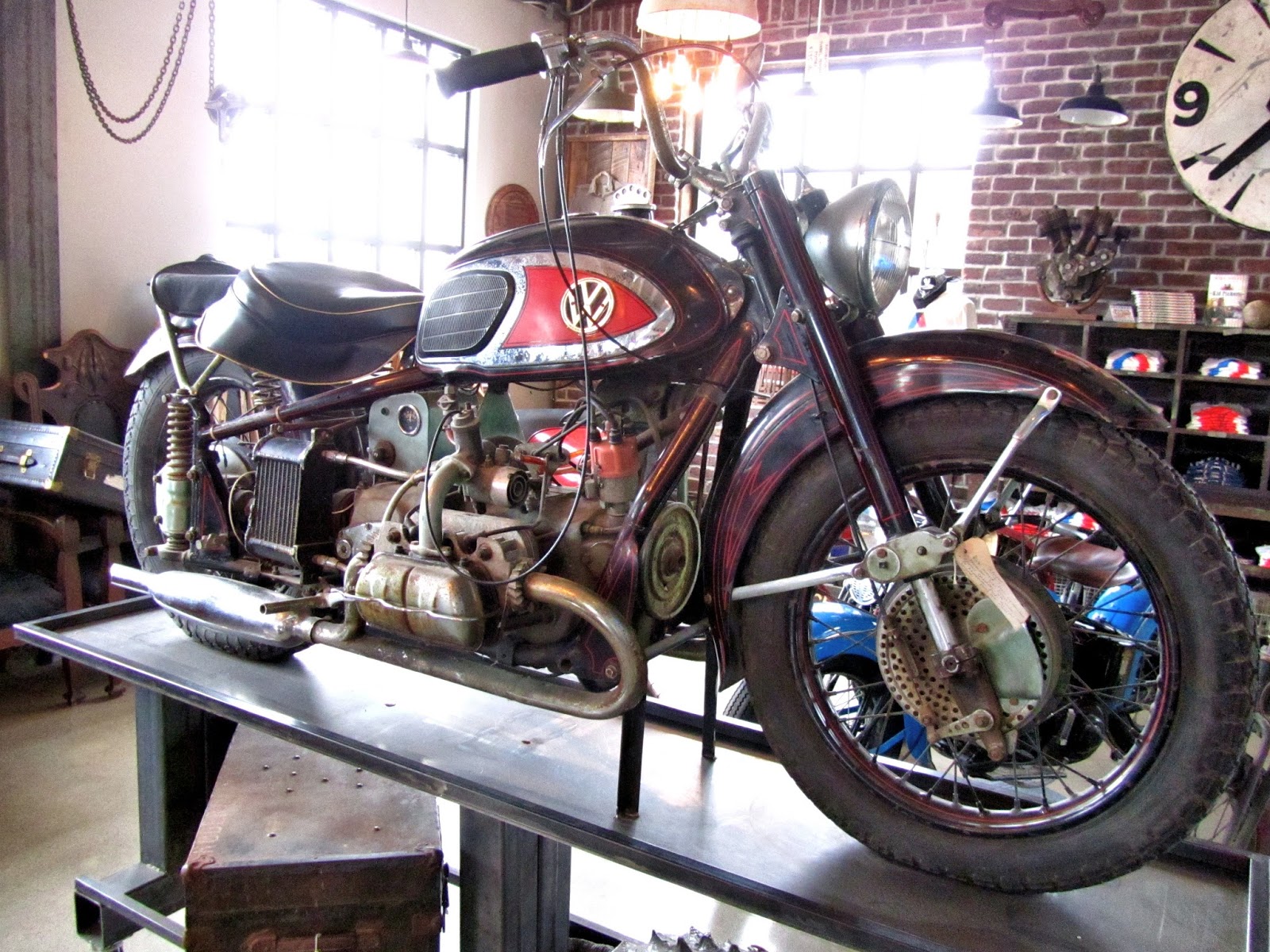 This old Indian, I recall the episode when he found it.  I don't remember the price he paid but most would think it outrageous.  But you have to consider, it is the only one known to exist. 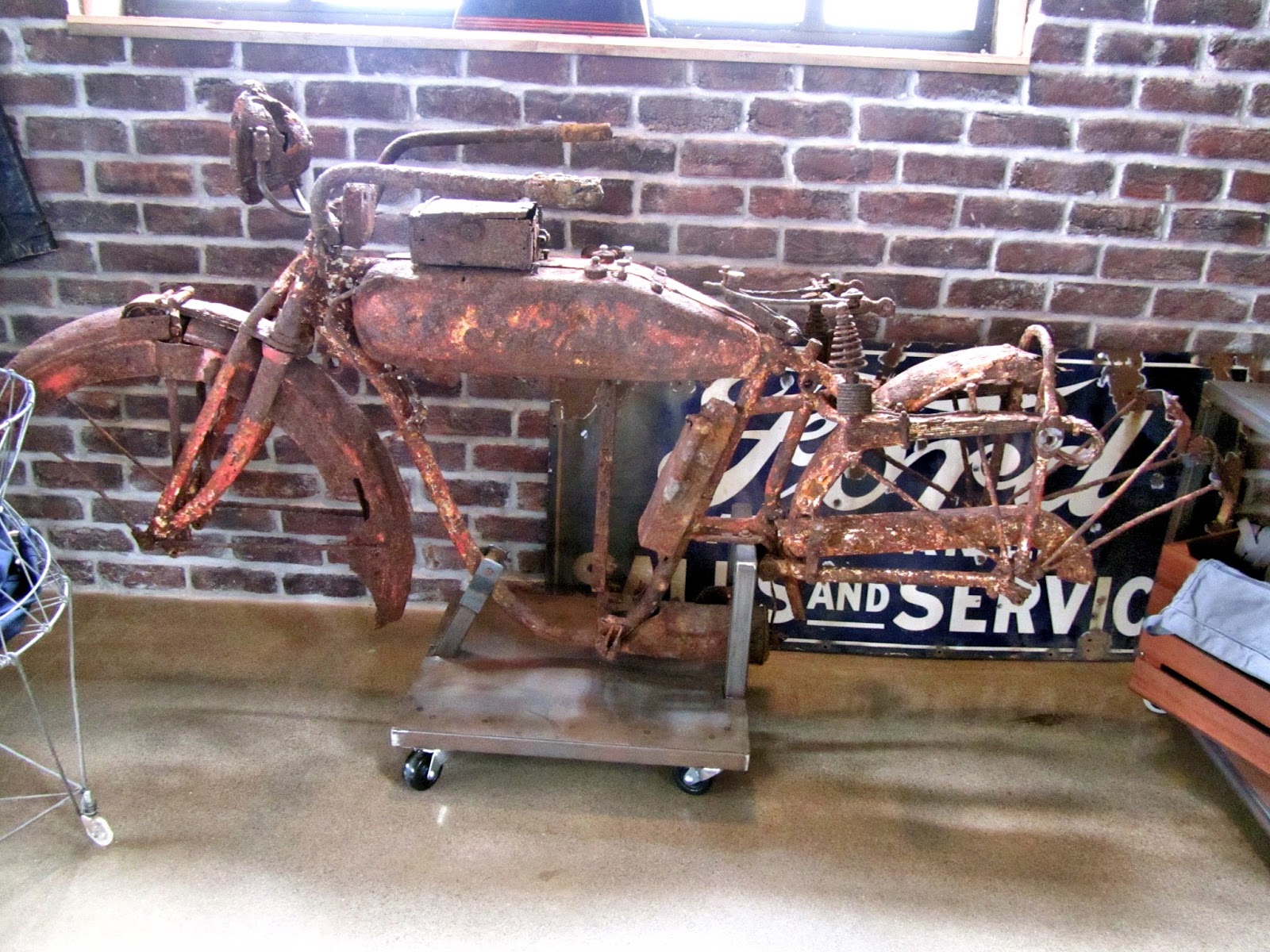 An old bicycle with a futuristic design.  How many are there still around?
That movie poster would fetch a tidy sum. 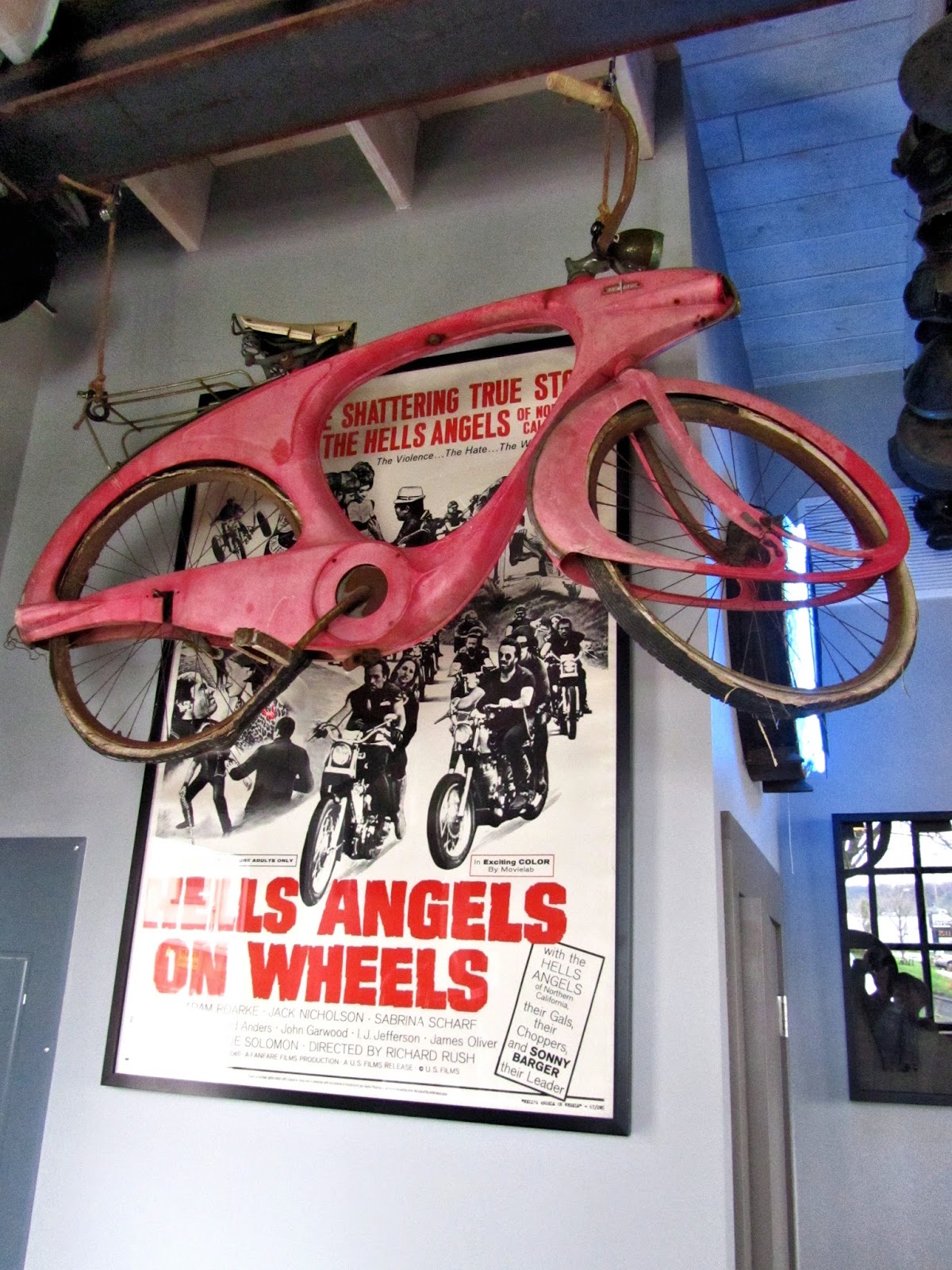 This I believe is the old Harley Davidson he found long ago minus the engine.  It took him years but he finally located the correct engine for it.  If I am not mistaken he had to trade a couple incomplete Harley motors from different years in order to strike the deal to get the motor he needed.
Yep, probably not many known exist of this particular model and year. 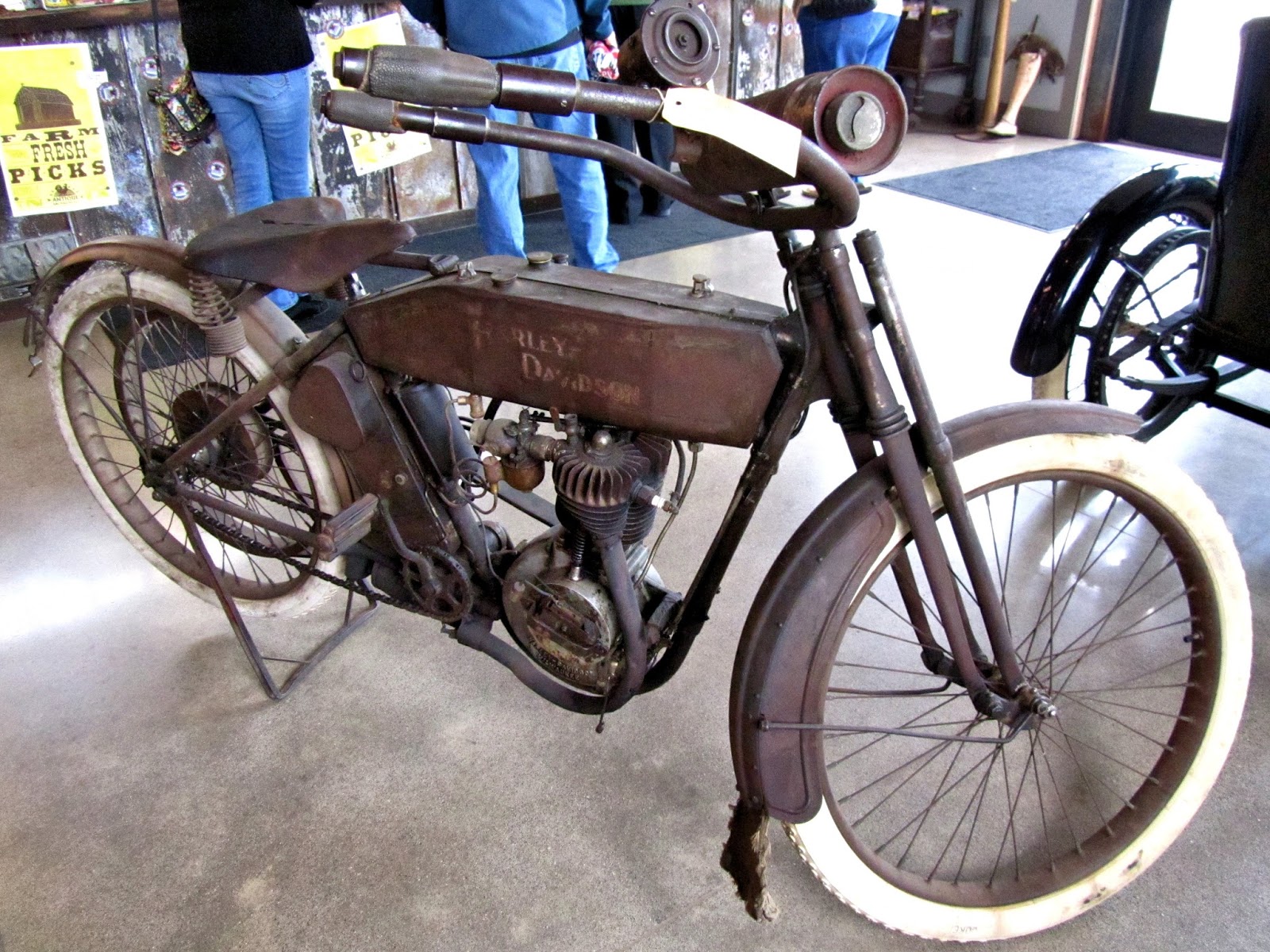 This is part of the display behind the counter.  I forgot to take more pictures for I got caught up in the story being told to a customer buying a t-shirt or two at $25 a piece.  The saleslady was telling us about how some people come in with their little kids and don't keep an eye on them.  A little girl, not being watched by her parents, wandered into the area you see below, and pulled over a Tiffany Lamp valued at $600!  Destroyed.  "What can you say?" was what she said to us.  Well I would think "You just bought a Tiffany Lamp" for starters. Then there was the little boy who walked up to the typewriter Mike found that supposedly belonged to Albert Einstein.  The kid was pounding away on the keys and the parents did nothing.  I forgot to take a picture of the typewriter but it was setting on the same level of shelf as those gauges are in this photo, but over on the other end of the display.  Well, maybe they should place these kid magnets up high, out of view and out of reach, ya think? 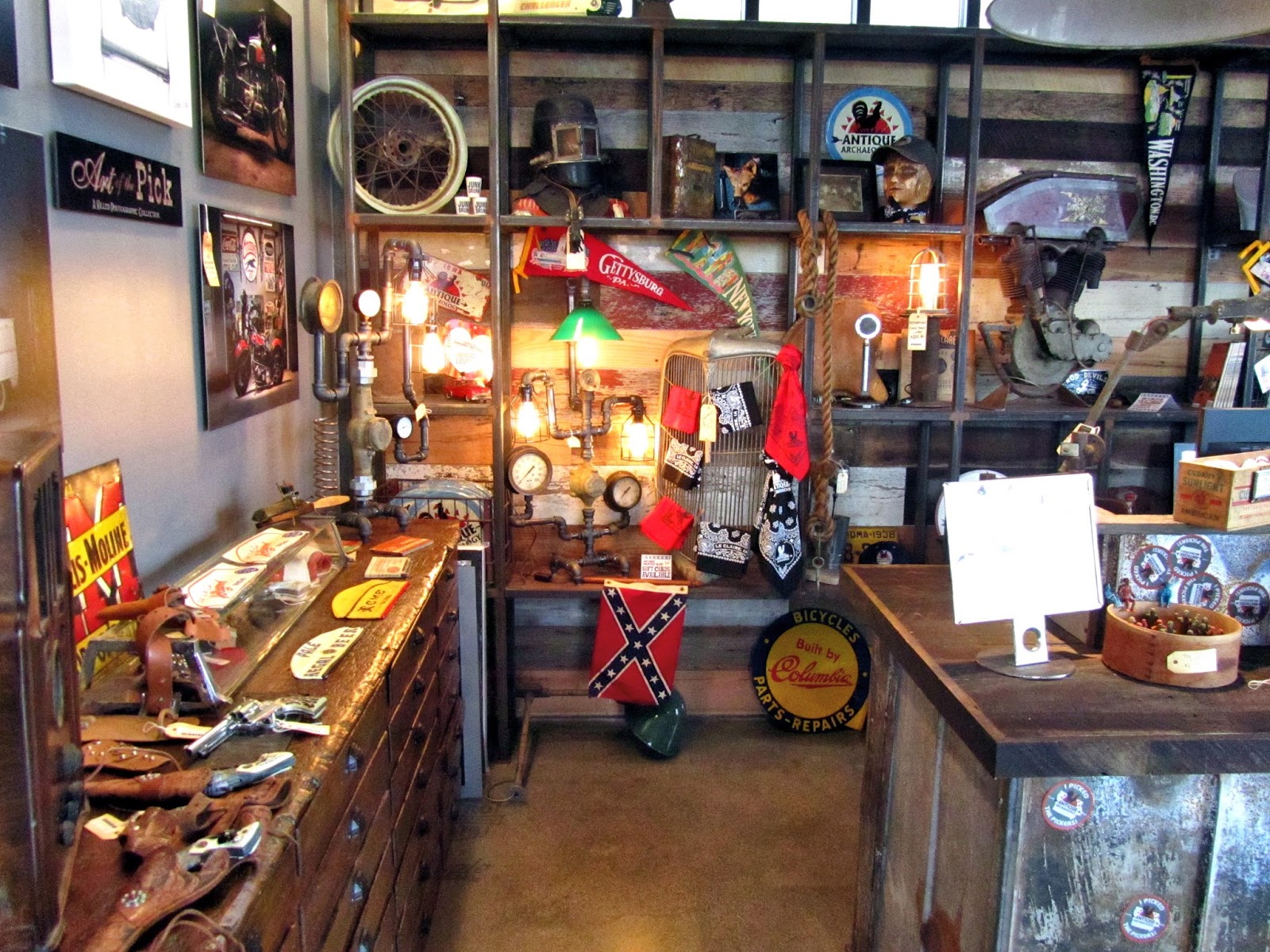 By now I had had enough plus being a little nauseated about the Tiffany Lamp story.  I went back over to the old shop in an attempt to decide if I want to buy a souvenir of my visit or not.  Just then Mike's younger brother Robbie pulled in.  Robbie has been on the show a few times in one aspect or another.  We got to talking and when he learned I was from California he asked where I was heading to next.  "North of here" I said with no definite destination.  Well he told me I must stop by the National Motorcycle Museum in Anamosa, Iowa.  Boy, am I glad he reminded me of that.  I keep a list of all the motorcycle collections in the country with me when I travel and completely forgot to check on Iowa.
Thank you Robbie. 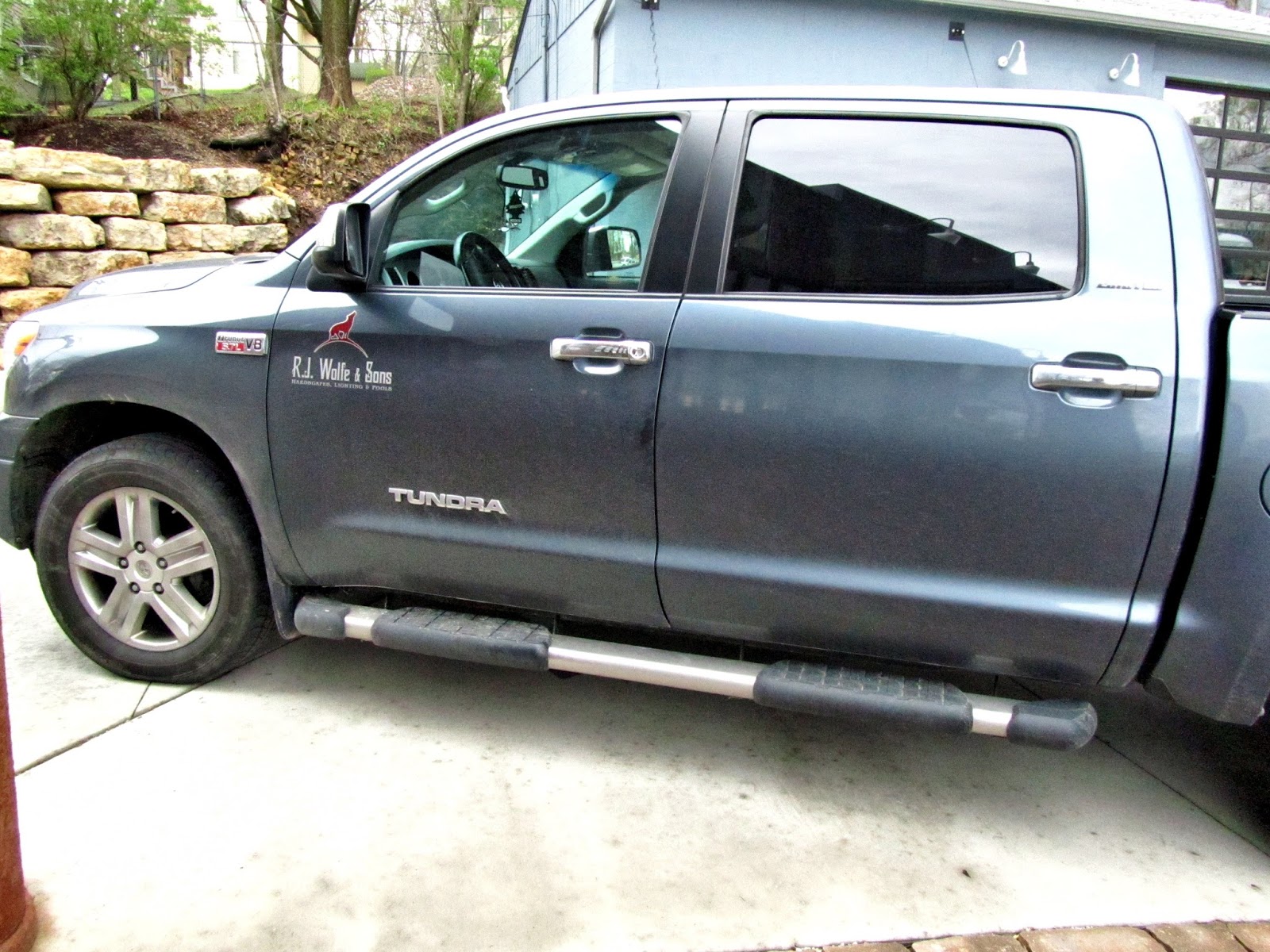 The ladies were going to load up some boxes in the old Sprinter Van and I offered to help them getting to see inside where many thousands of dollars of collectible junk once traveled. 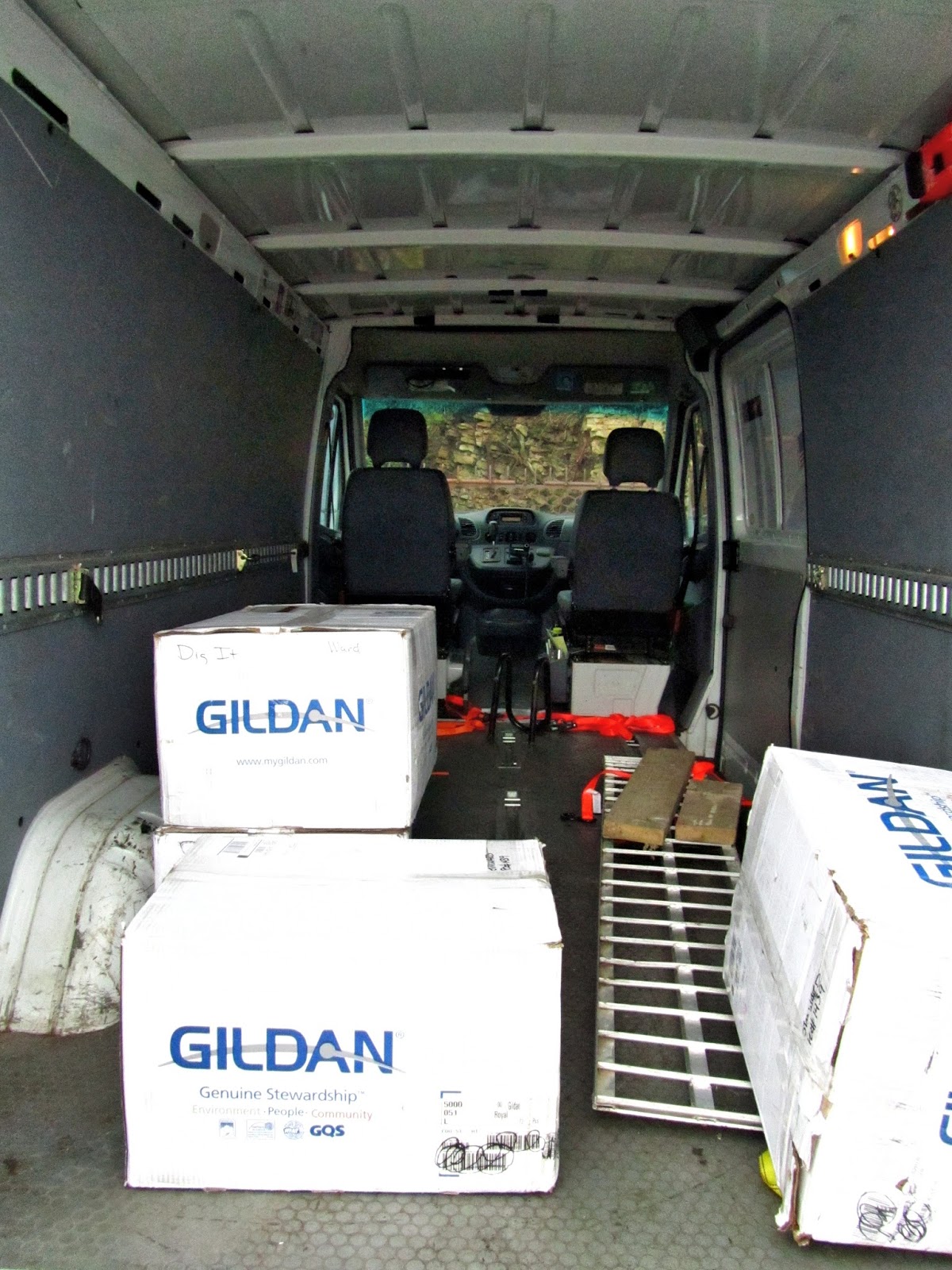 So I was done.  Time to get going.
One last picture and then go check in on Sinbad, have some lunch and move on up the road. 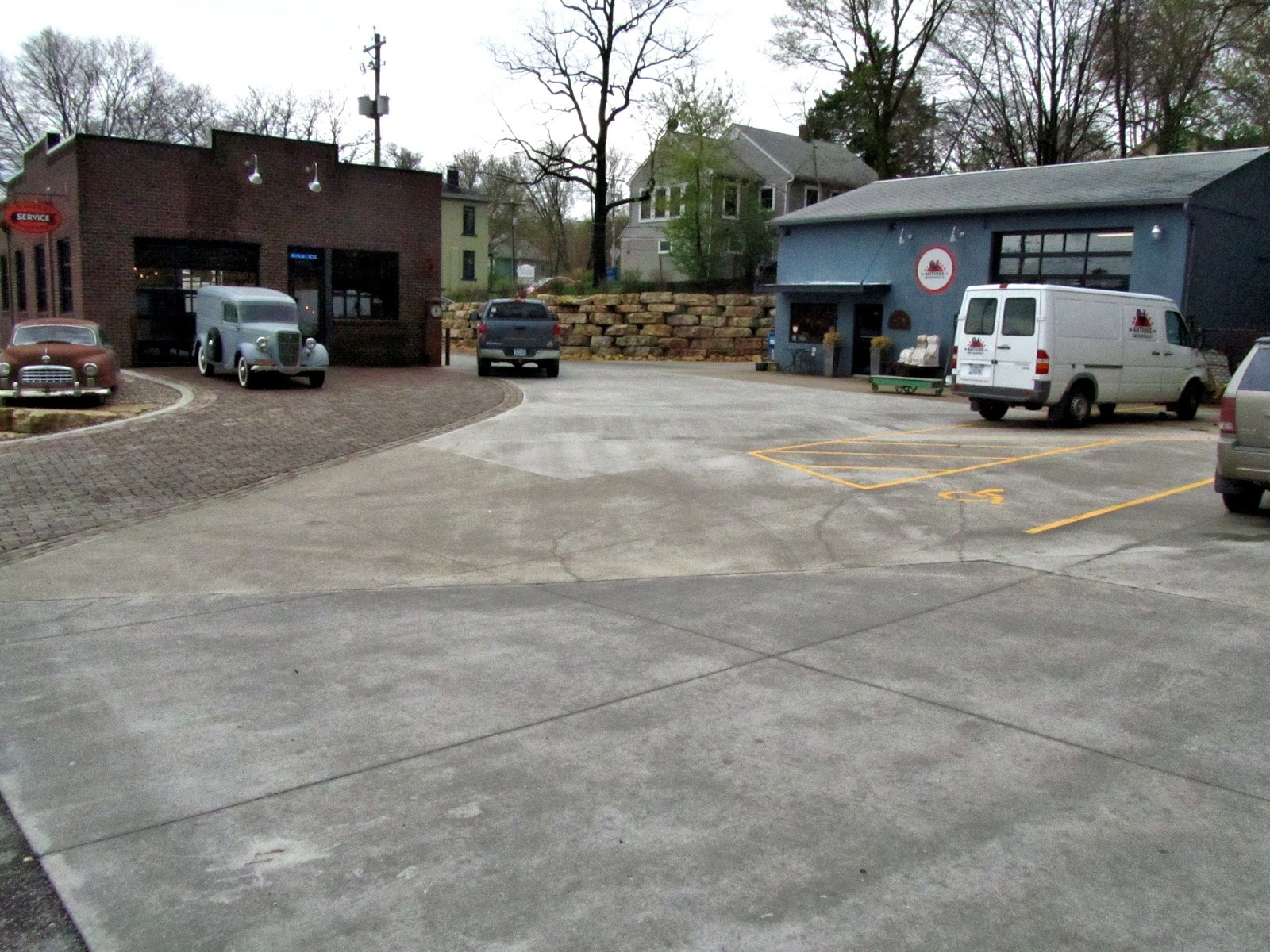 Oh yeah, I bought a small lapel pin (to stick up inside the Little House on the Highway) a sticker (I don't know why) and a magnet which began to fall apart in the Iowa weather two days later.  Total $10.50.  I sent the magnet back while on the road.  A new one was waiting for me when I returned home with a note stating they weren't made for "outdoor use".  Odd.  I guess it was made for refrigerators only; like wives would enjoy having this on their refrigerators.


I like my National Motorcycle Museum magnet better
and it cost less than the Picker's flimsy $2 postcards which I didn't buy any of. 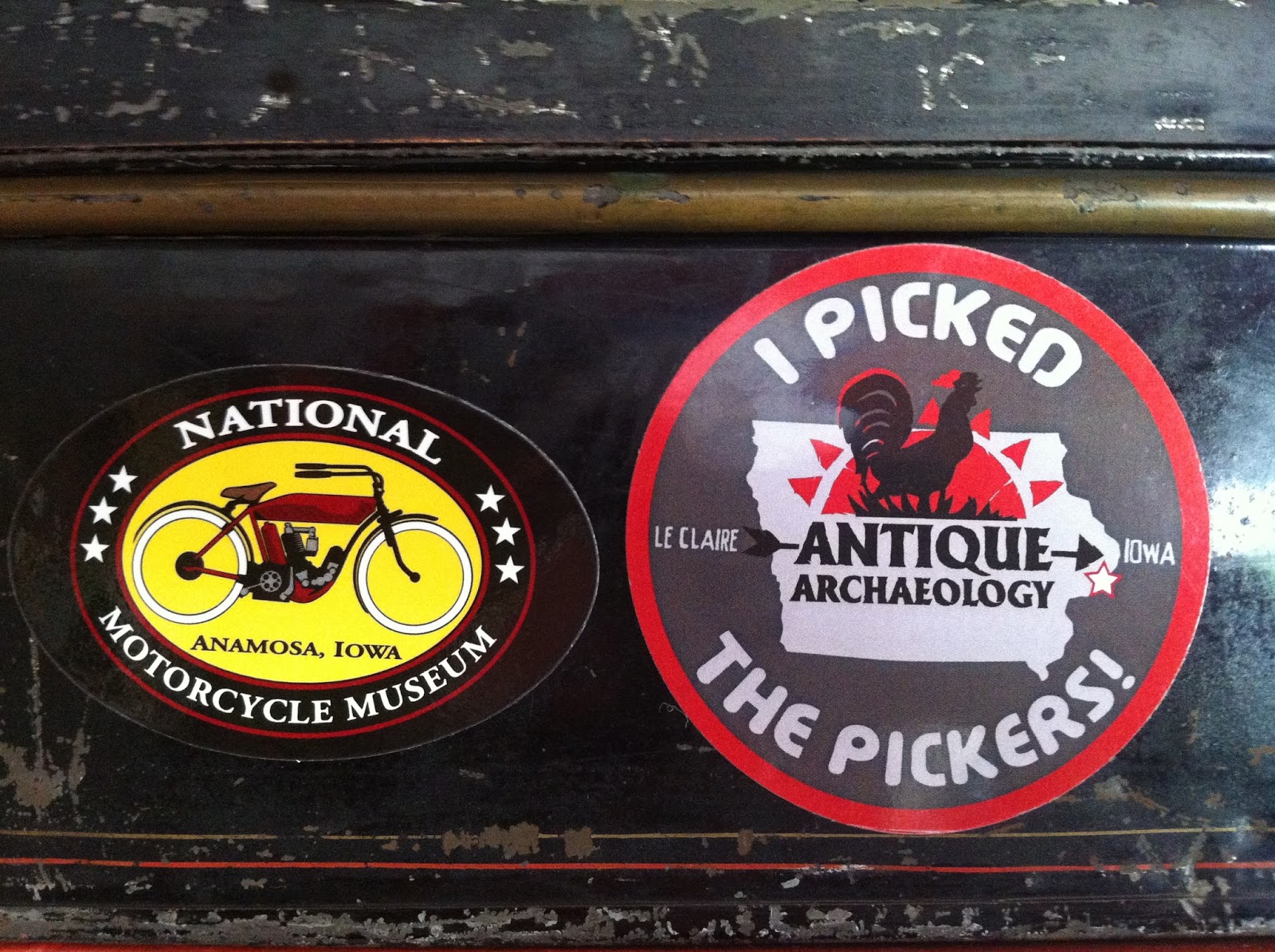 Thanks for the explanation and the beautiful shots. I see now that somewhere on the 90 canals from our cable tv there is one who shows this show. I shall watch one thanks to your reportage of them. Thanks John.

I can imagine you had the time of your life in that shop, intersting items and stories. BtW, I am such a wife with magnets on her refrigerator.

Although I have seen the show only a couple of times, I really did enjoy seeing the behind-the-scenes shots you took. Thanks, John.

sounds like you enjoyed the visit all around. even with a few pains and pangs. :)

We watch the pickers. I agree with you. Frank is mild with his language. I like him. he is a nice guy . A guy you would like to sit down and talk with. Mike is a guy who never sits still.

Not sure why he is using the language. For the beginning of many shows he was I call a gentleman.

I guess he figures it make a man of him. Really. I disagree.

Now Annie Oakley is sweet lady but her branding on her body parts visible makes her less attractive but to other people of her type. They don't mine. They look beyond. I do dig her clothes styles at times. Comfy. To each their own.

They sure do some picking though. I mean Mike picks the awful doors or cars you can imagine. He thinks they are beautiful and will make them doe.

Then he says. Oh it has made his day.

Boy he must make Frank want to wring his neck at times.

Thanks for sharing your story and all.

It is a good show if you can turn your sound down or out the door the cussing from Mike. I do like the places they go and get looking at. I know those he goes too can be so down cheap. They don't want to part with stuff and you see they act like hoarders do. Way too much.

Have a great day.

Okay, I'm seriously envious of your visit to Iowa. I'm a fan of the show and in awe of their deep knowledge of the stuff they collect. Of course they're capitalizing on their fame. This is America, after all! Before the show, I doubt they had much traffic in the shop. Now the watching world must beat a path to their door. But I'm like you, I'd buy a trinket souvenir rather than a $25 t-shirt. Thanks for the fun peek into their real world.

Jeeezzzz…. for indoor use only… well, I guess you've got your indoor glue and you've got your outdoor glue… Oh man, look at the tats on that beautiful lady. I surrender. Somehow I missed that show. Am going to have to send that photo of the 1950 Nash to my buddy in Buffalo, because he had a Nash of roughly the same vintage, but his opened up in the back and he used it for camping a few times. But that car is a beauty! Fully restored it could bring quite a penny.

i know the hubby wants to go this very spot. may be one day soon. when we had cable it was one of the shows he loved watching. ( :

They have alot of interesting things.

I might have to go see my sister-in-law and while there find an excuse to go see this museum. What a nice collection of machines, I say.

The bicycle is a very nice looking design as well.

Can you imagine, SC and me were zapping on our tv chanals and suddenly I saw a program American Piccers! We watched it and recgonized all the stuff you had shown, the van, the shop, the people and the way they were driving around to find some other old things.

I watched a few seasons of the show and then got bored because they tend to pick the same kind of thing over and over. I recognized a few items from your posts, especially the Phillips man!

I somehow missed this post...and I was waiting for it and looking for it....I swear blogger plays tricks on me.

Ha! Just so happens that I have my old laptop on my lap and I'm multi-tasking...checking up on some photo-blogs and watching American Pickers. It's Wednesday night.