I knew there was a collection of Janis Joplin memorabilia in Port Arthur, her home town.  My information said it was in the Museum of the Gulf Coast, and I was expecting some little building like most of these museums are I seek out.  Finding the Museum of the Gulf Coast was no easy task either.  Claire, my GPS lady, led me all around Port Arthur into some pretty run-down areas and neighborhoods.  I hardly saw any people about anywhere.  I found complete city blocks empty of buildings, just foundations left behind.  I thought it was all due hard economic times or some major downtown redevelopment program that was started and never finished.  I eventually learned that all I had seen was the effects of Hurricane Rita in 2005 and Hurricane Ike in 2008.  Vast areas of Port Arthur never recovered.

So you can imagine my surprise when I finally found the Museum.  It was the only newish looking building in port area, it was much bigger than I expected and no one was there.  Now that could be good - I have the place all to myself, or it could be bad - I came on the day that they were closed.
They were open. Whew!  It is hurricane proof too. 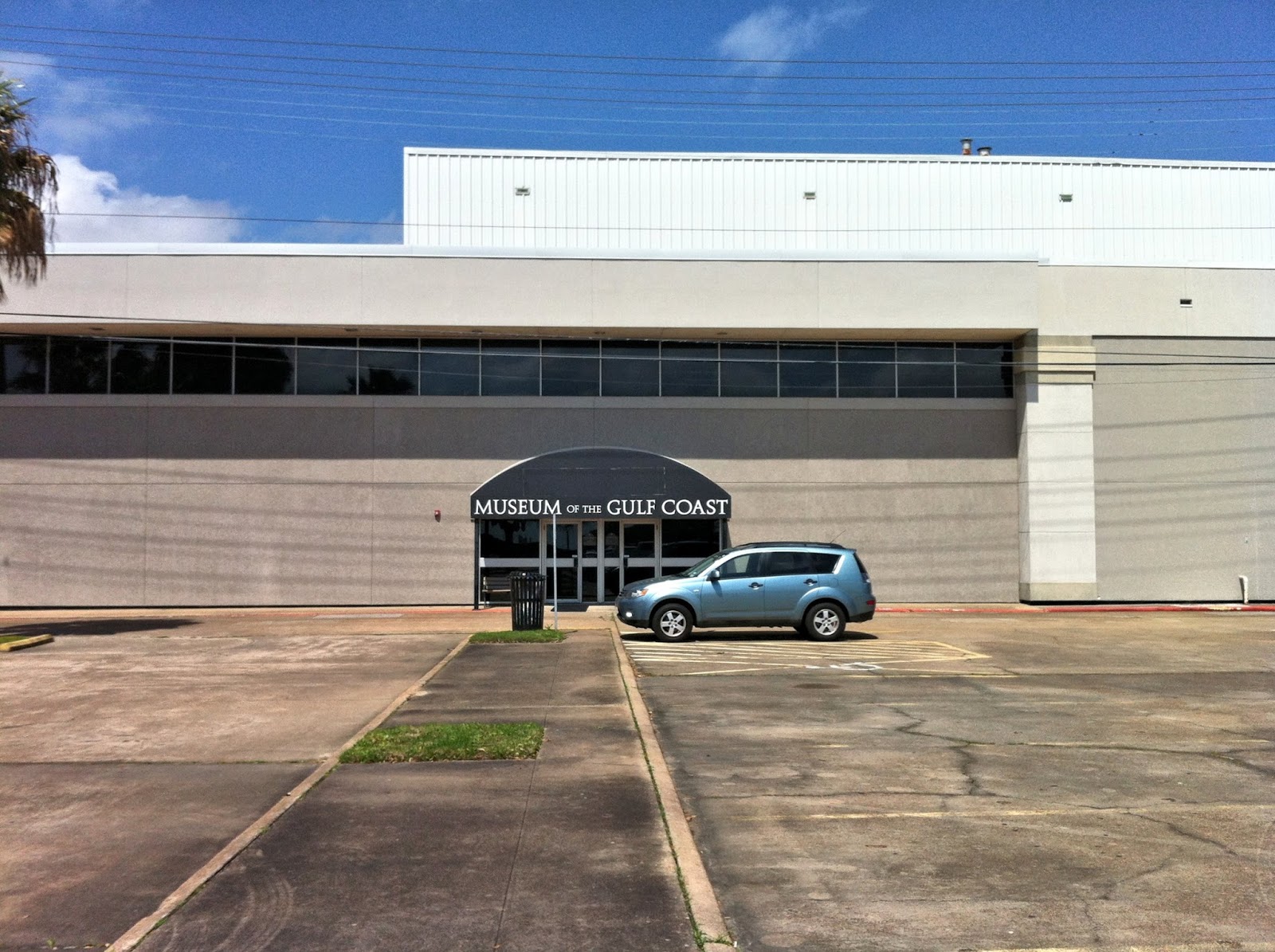 The lady at the counter who greeted me was very friendly (most all Texans are) and I admitted to her that I had come just to see the Janis Joplin portion.  She said that they get many visitors who come for that only and directed me upstairs to the Music Hall.  "But please tour the rest of our museum for I think you'll find it interesting also."  I said I would. 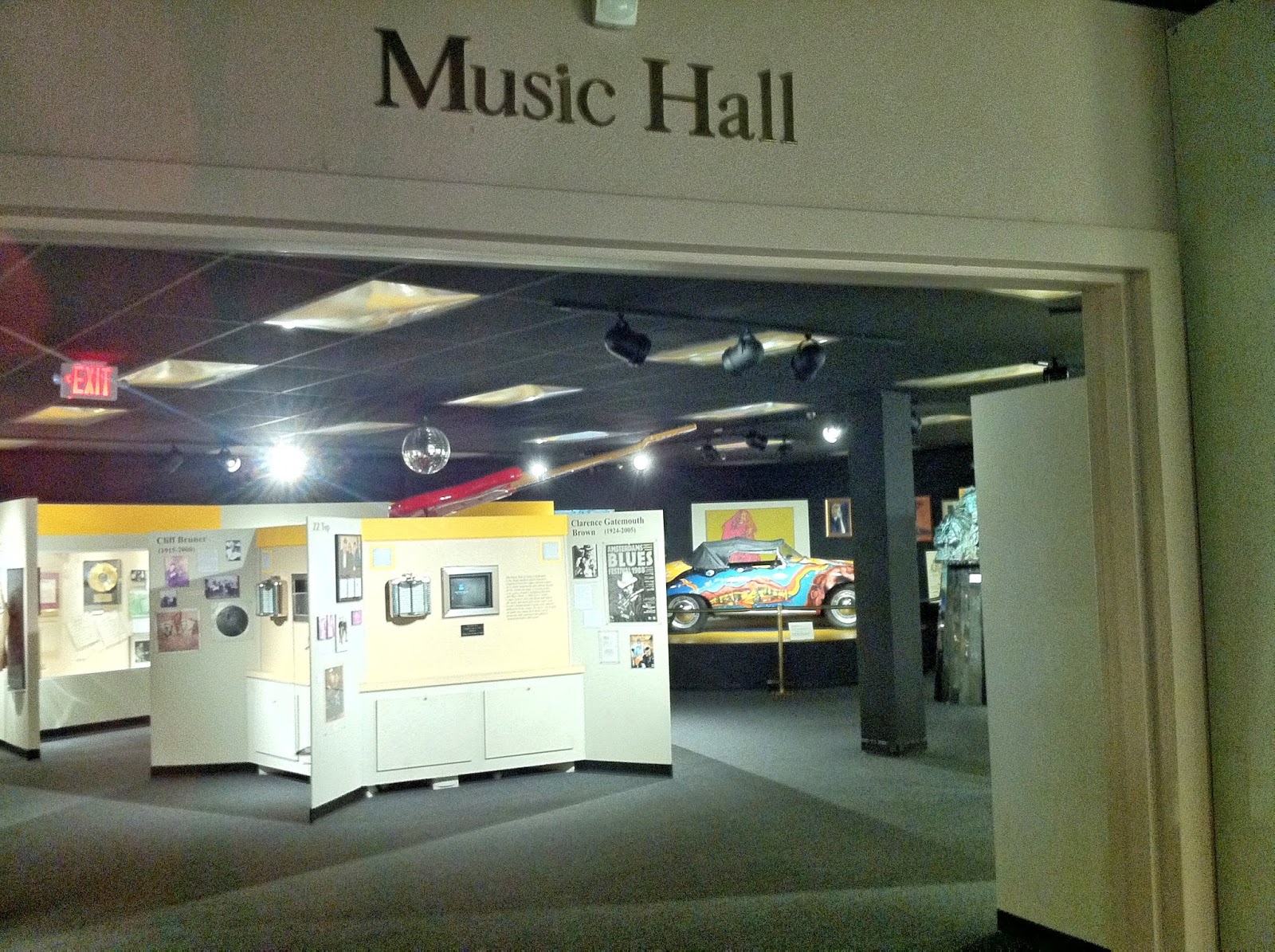 I was so giddy to finally be here. 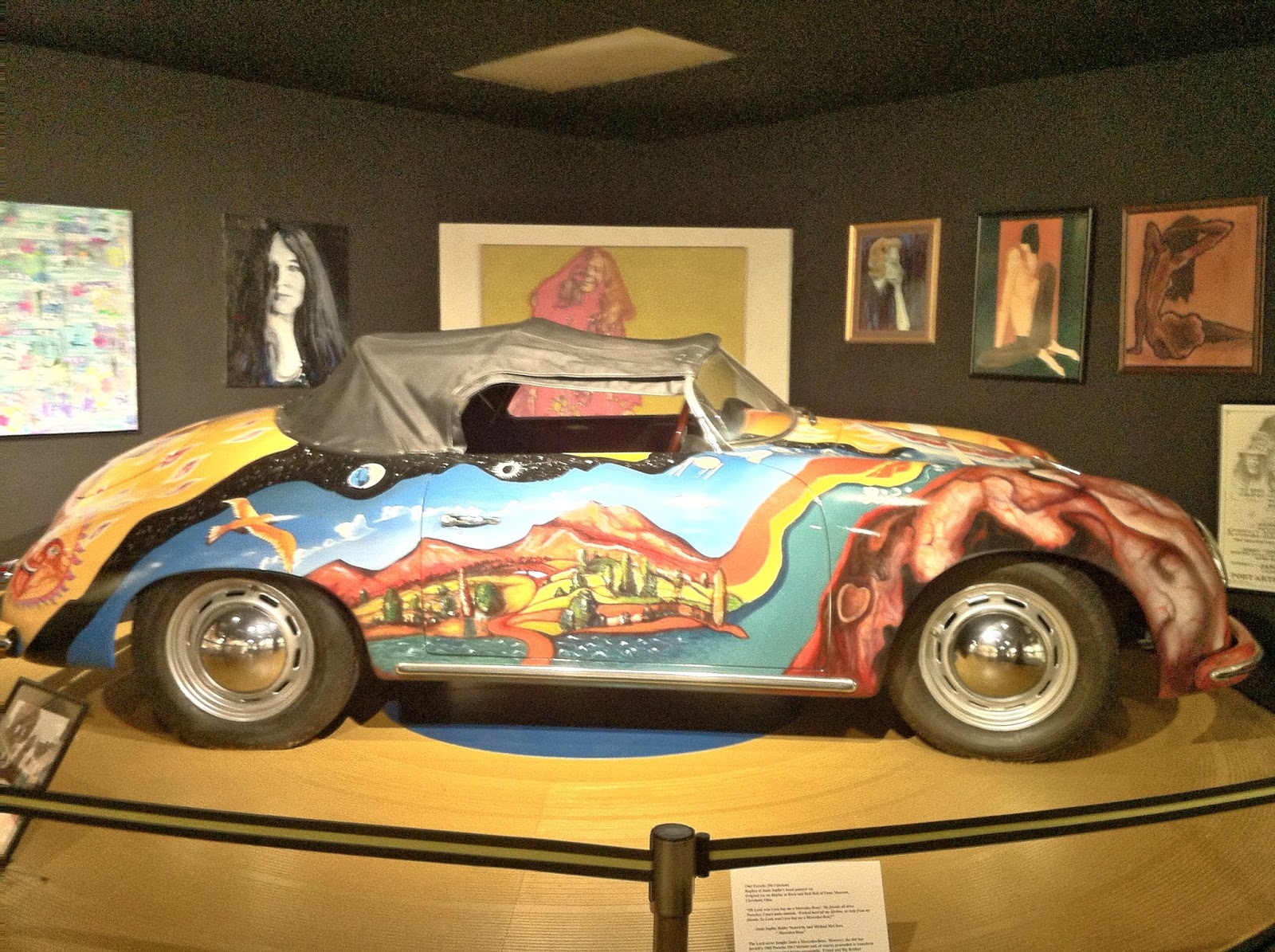 I mean here I was, standing right next to her car that she drove. 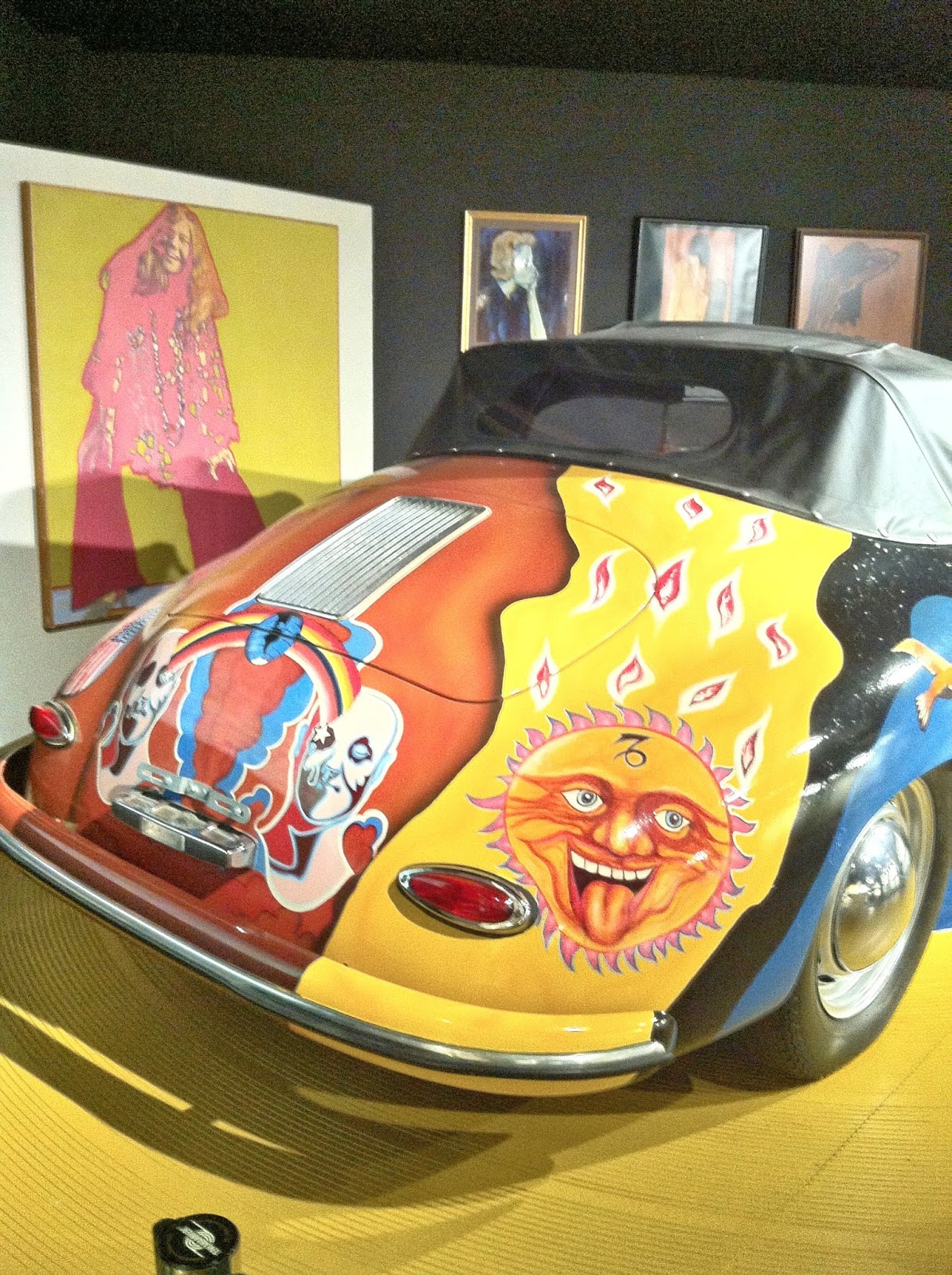 Like I could touch it too.  I looked around for surveillance cameras. 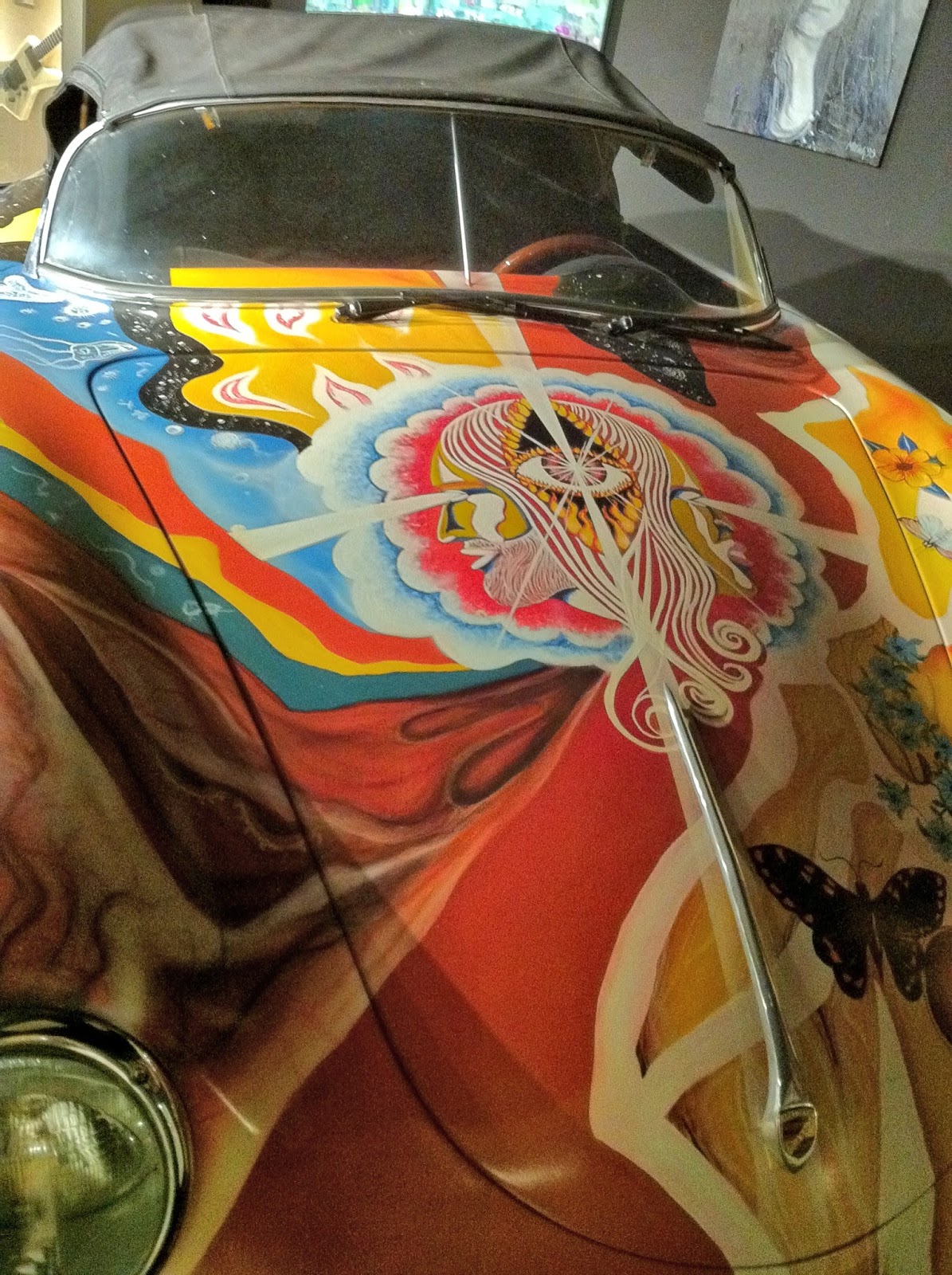 Then I read the sign and saw the word "replica".  Huh?
I read on and my heart sank. 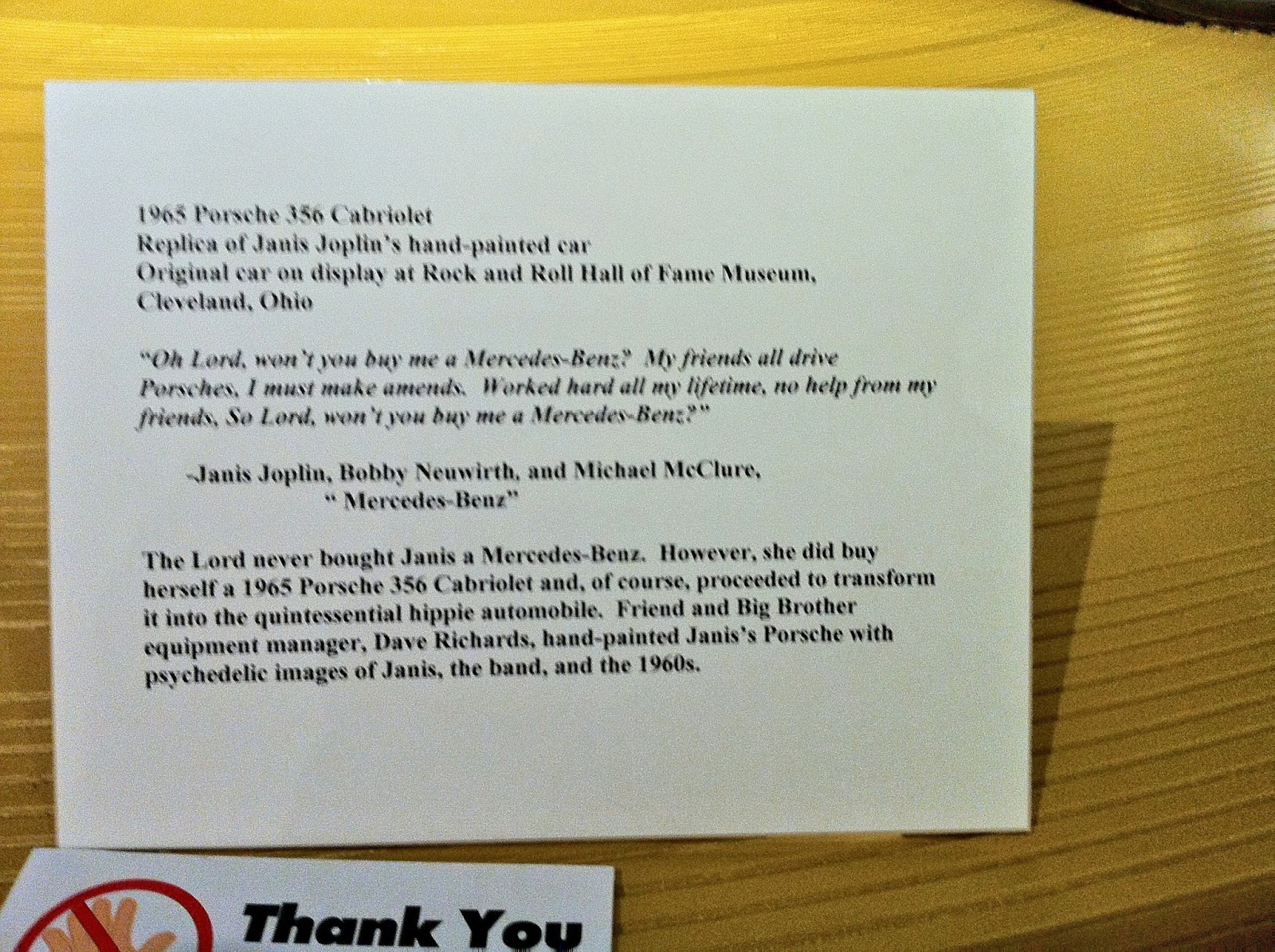 I tried to get this devastating revelation cleared from mind
as I slowly wandered by the display cabinets. 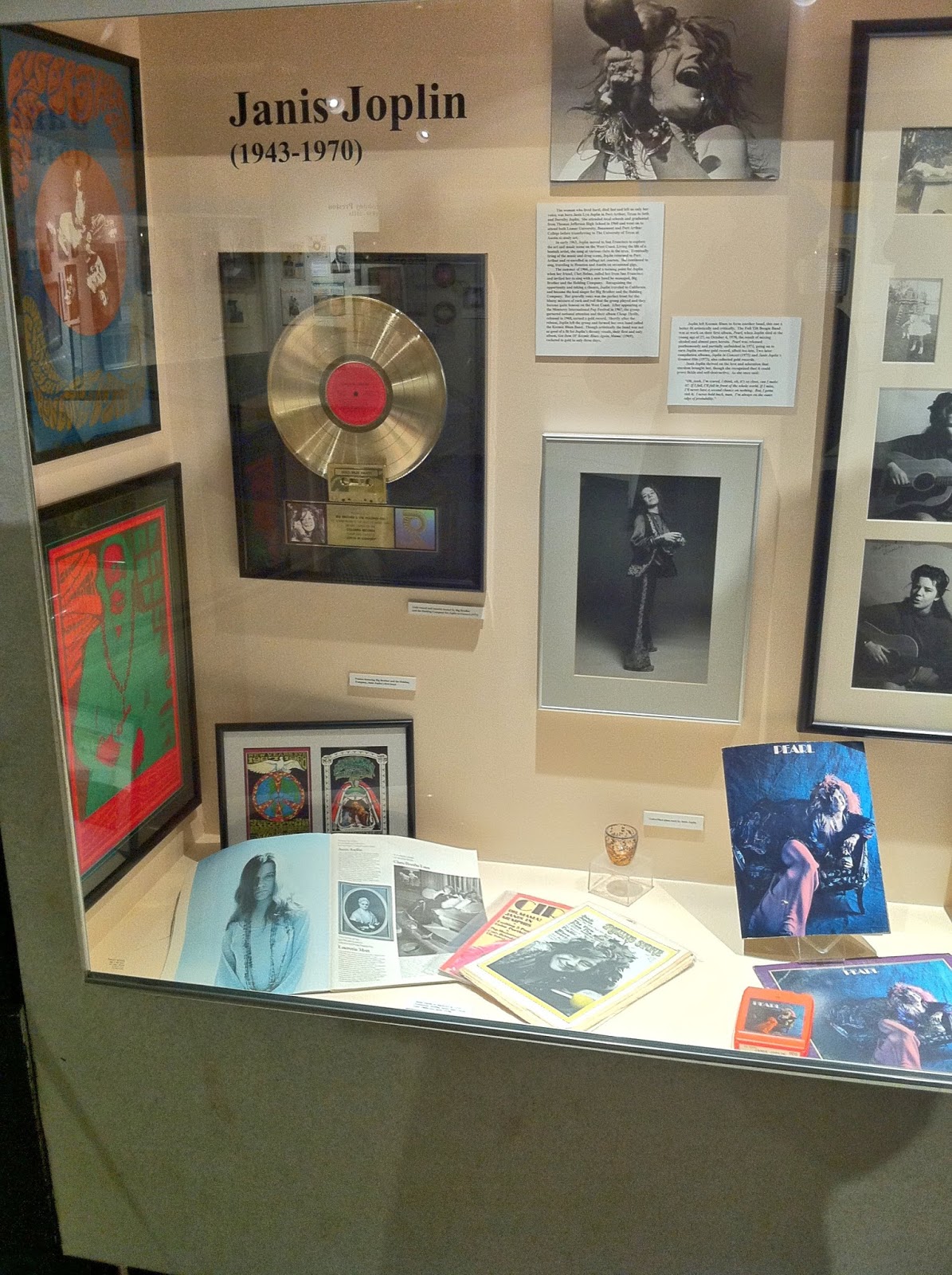 Aw, look at her as a little girl. 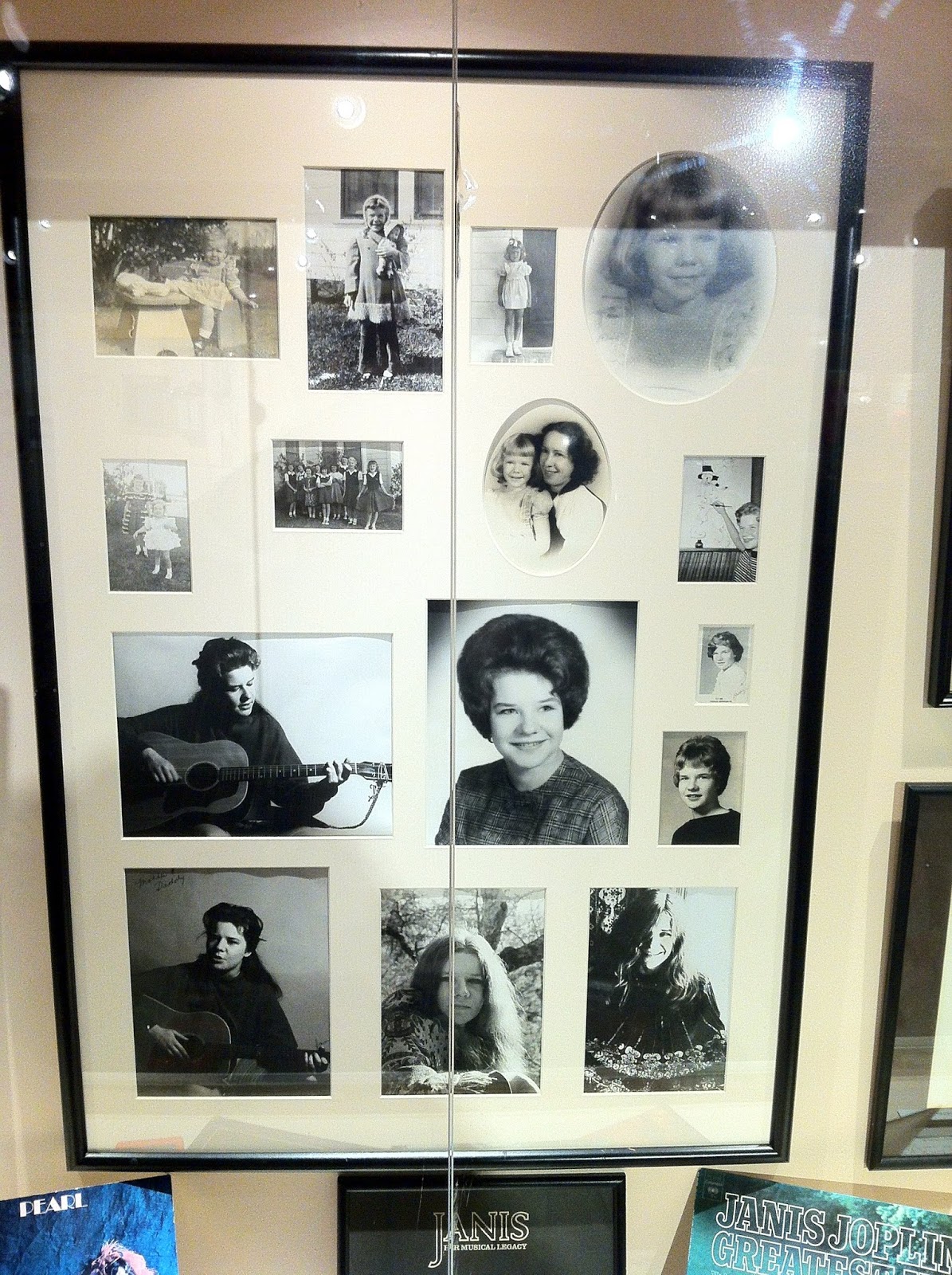 Wow, she was a good artist too.  I didn't know that. 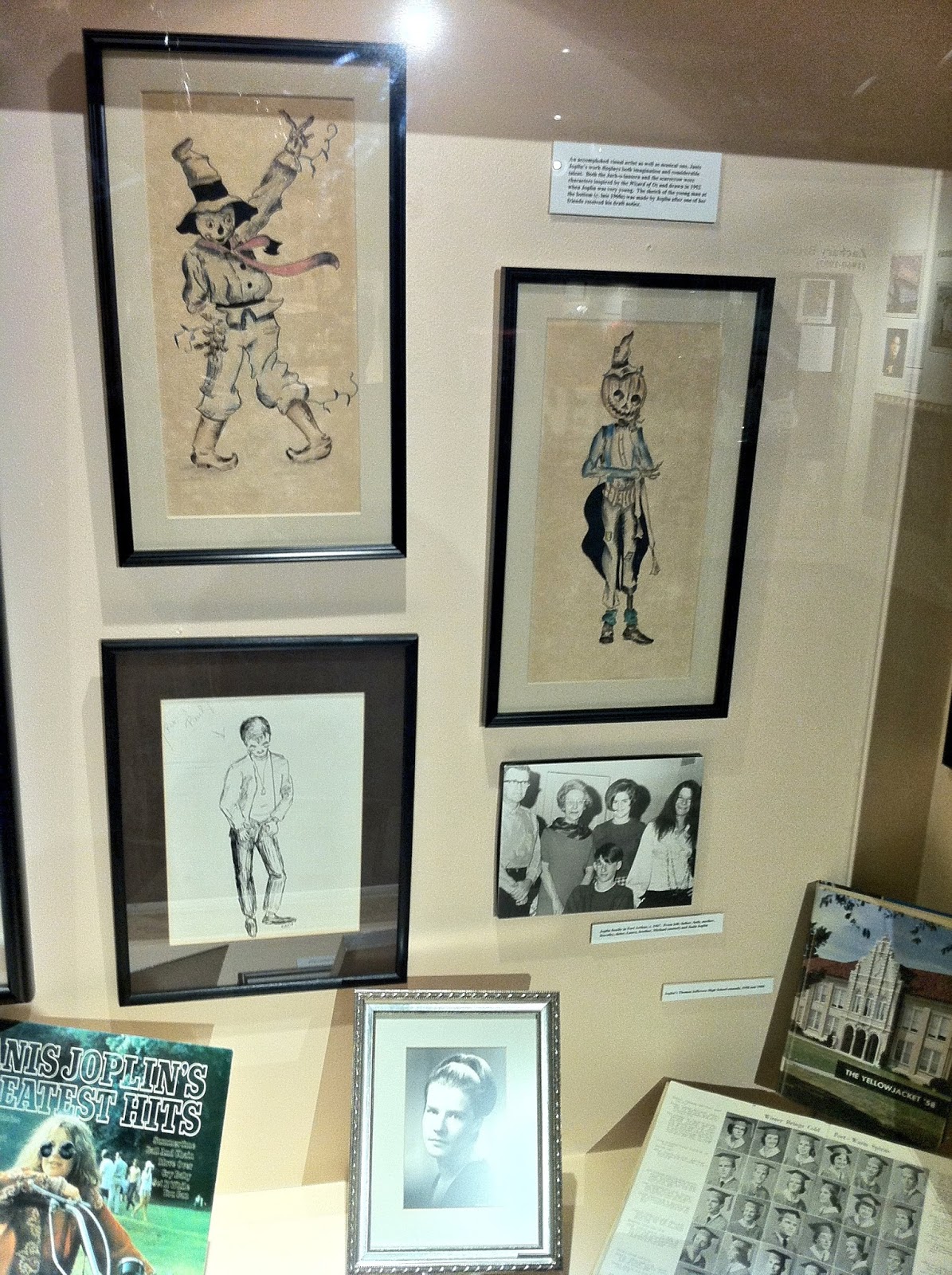 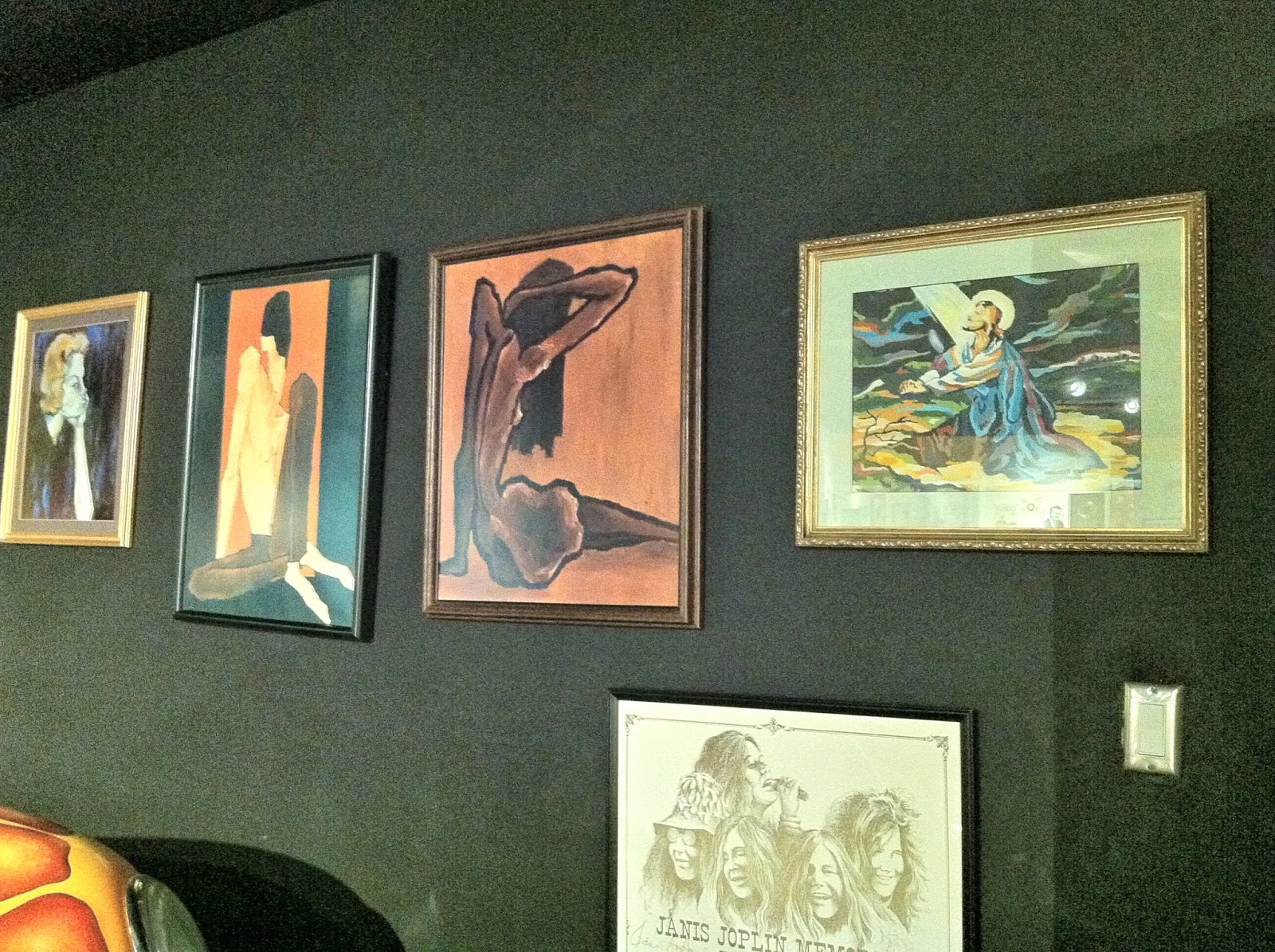 And that was it.  One cabinet, nothing more.
I waited years to come here, and this is all there was? 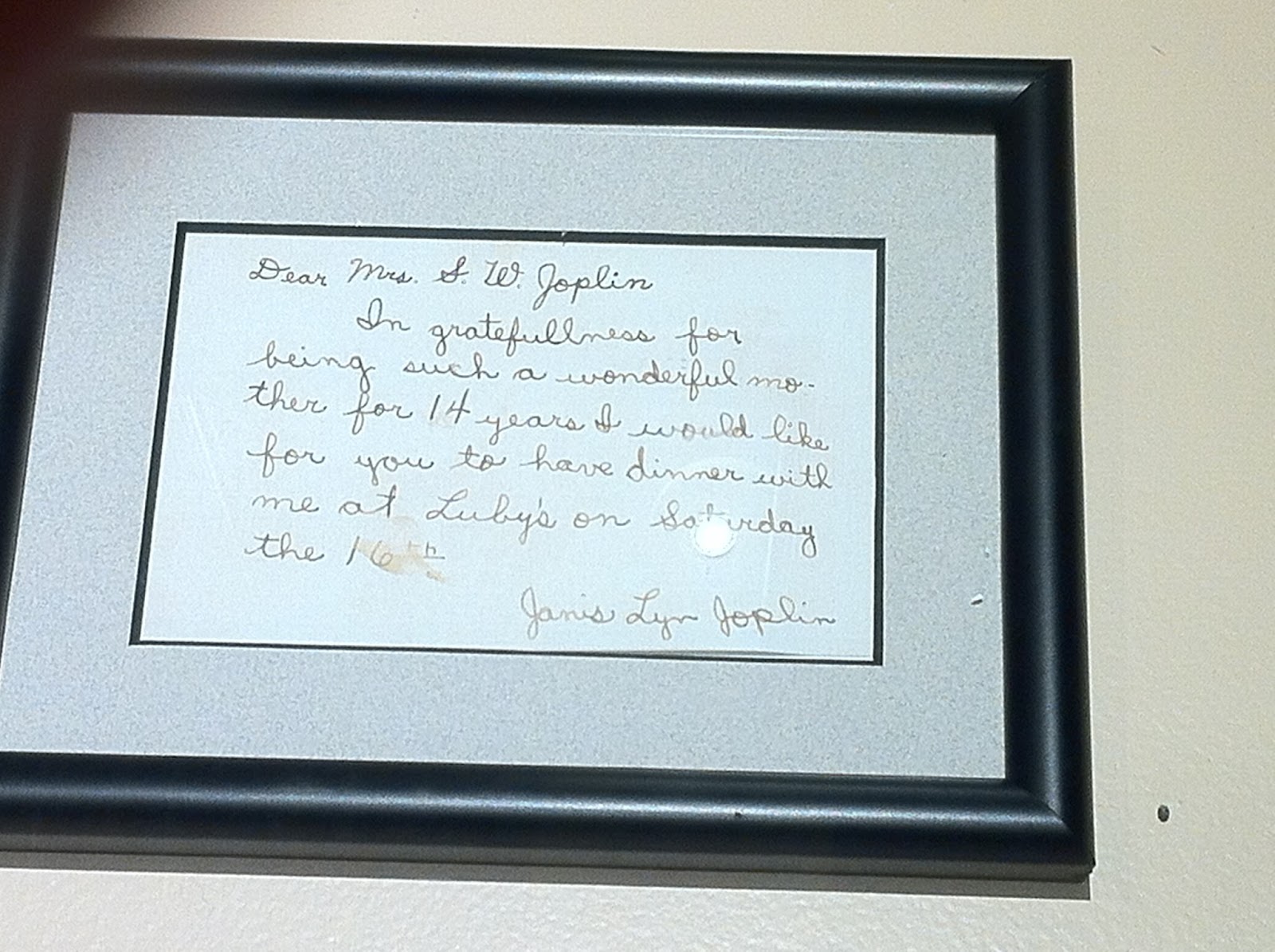 There was this sculpture and seeing nothing else, I went back for one last look at the replica car then wandered aimlessly around the rest of the Music Hall portion of the museum. 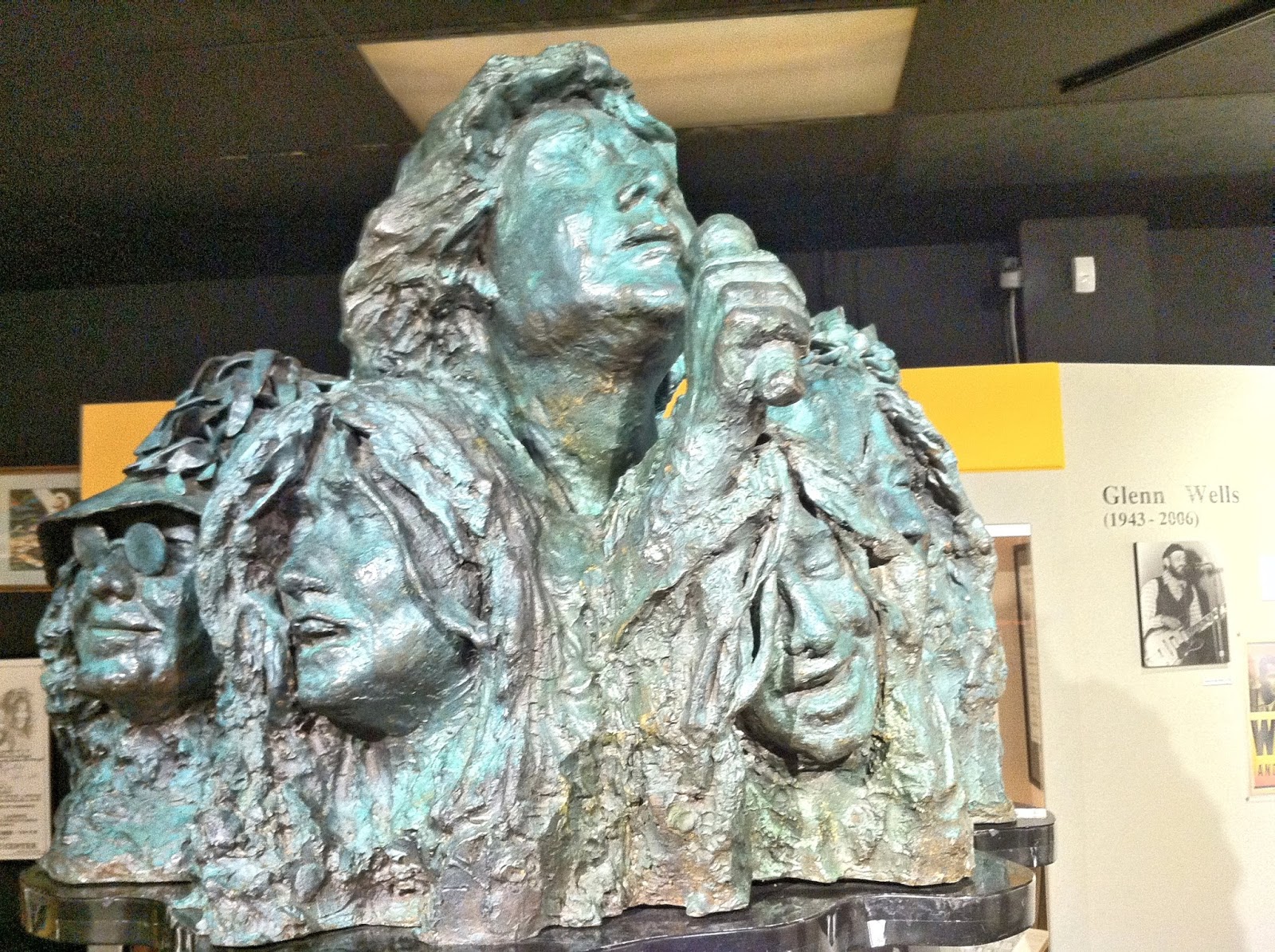 I was impressed with the large amount of recording artists that hailed from this area, but I didn't take anymore pictures.  I was still dealing with the car and the minuscule memorabilia collection.

I went back out in the parking lot to eat lunch in the Little House on Highway with Sinbad who was happy to see me return so soon.  While eating I reasoned that what more could one really expect?  She lived only to the age of 27 with just four brief years to show for in creating a music legend.

You can see the home she grew up in on this post from the road at the time of our tour of Port Arthur.

well you finally made it John and so your heart has been pacified some. I do remember your previous post of where she grew up too.

I can understand the deception but still a nice little display of a really great singer. I still have the records but alas no more turntable. But now everywhere in the electronic cloud.

I would have been disappointed too, John. How sad she lived such a short life. Another super-talented person who died much too young.

Pretty nostalgic. Thank you for visiting on behalf of us bloggers.

That must have been a disappointment indeed. Everyone can make a museum of some celebrity it seems. And the museum is hurricane proof so it will be here for ever.

well, at least you can cross it off your list.

Very cool. I love the car too.

Absolutely thrilled to see this post. I love Janis. She made such a statement back then and IMHO still does. For the first time, I am gonna emphasize that my signature goes well with the post's topic!

I think I see a trip to Cleveland in your future. Maybe Wayne and I can stop by there this fall on our way back home from the Smokies.