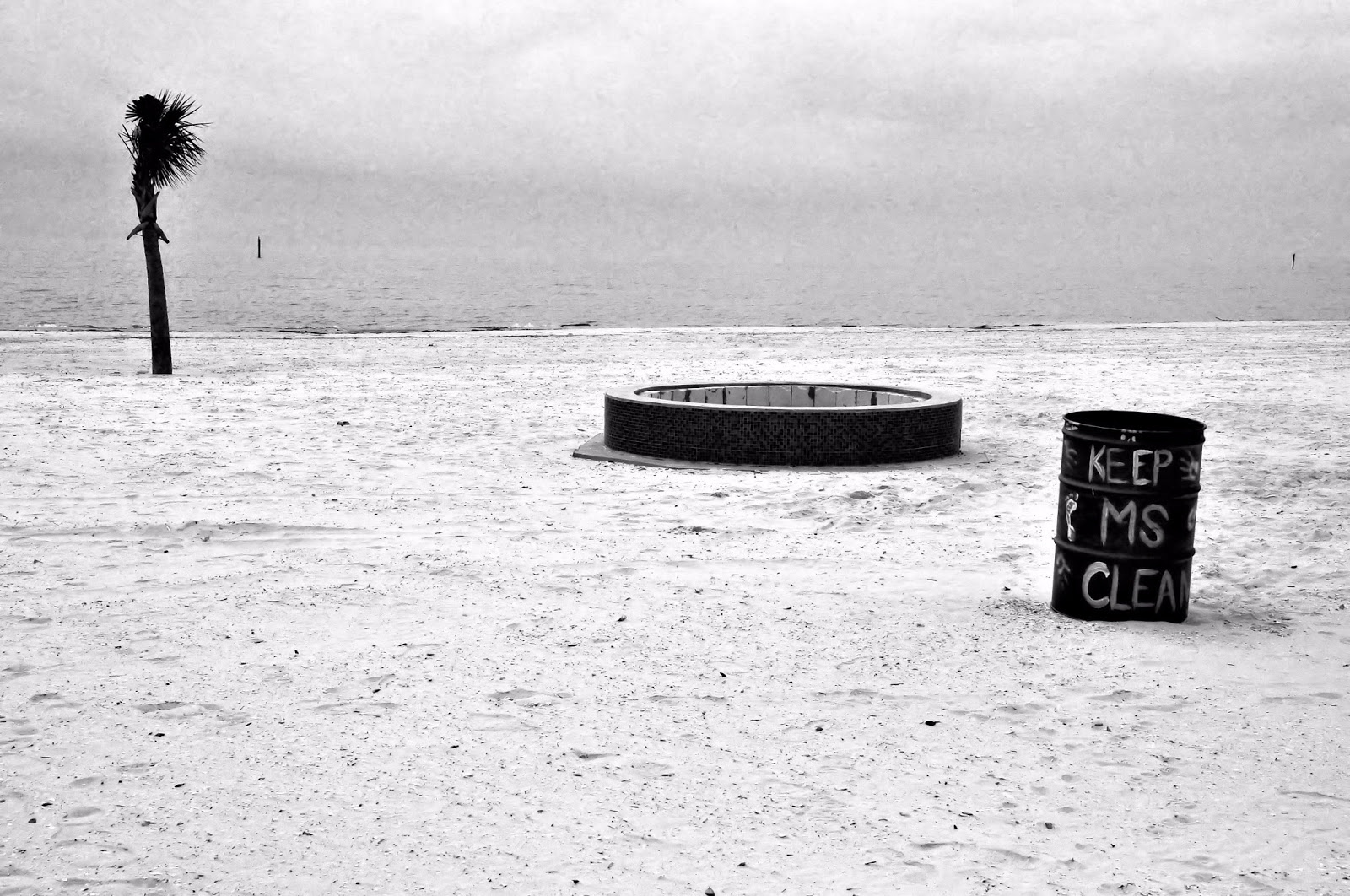 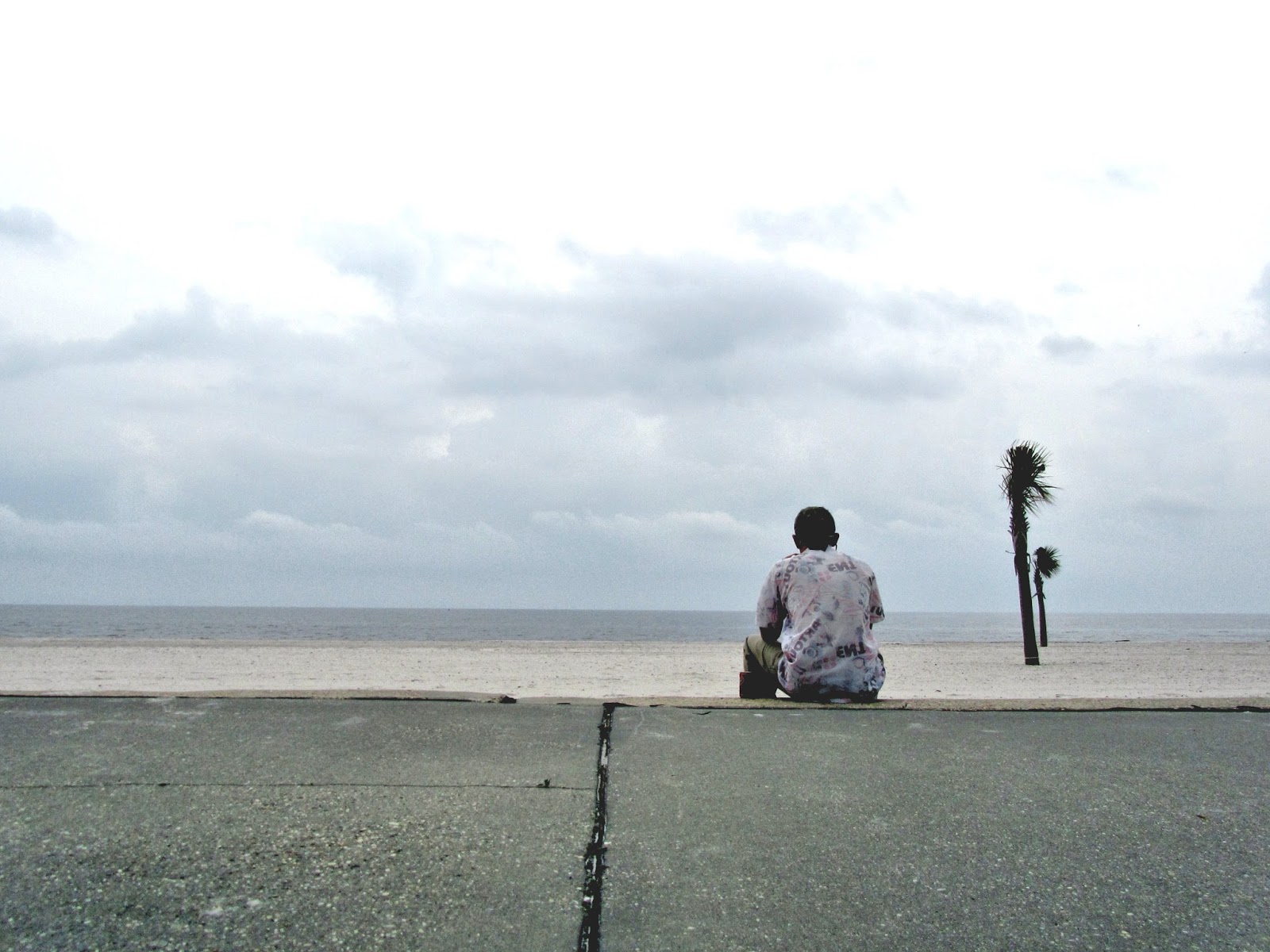 There is a little story behind this photo.  We had stayed the night at a very nice campground named Buccaneer State Park.  In no hurry to leave in the morning I took advantage of the nice facilities they had taking another shower in the morning before pulling out.  I also checked the oil in The Little House on the Highway before leaving.  I was quite surprised that it took two quarts.  I must be more aware of that for the rest of the trip.  We left and I was driving real slow along the beachfront when an engine warning light suddenly came on...an oil can symbol.  Huh?  I'd not seen this before and pulled over to check the owners manual as to what this symbol meant.  Too much oil in engine.  Damage to engine may occur.  Egads, how can this be?  I checked the dip stick - yep, way too much!

Oh I could write pages as to what was going through my mind at the time as to how this could have happened and just how was I going to get this excess oil out of the motor.  I drove inland a couple miles praying the motor wouldn't self-destruct and found an vacant lot in a sketchy neighborhood.  I dug a Styrofoam Chinese take-out container out from a trash can (dumping out the left over chow mein) and very carefully loosened the oil drain plug yet leaving it in place so as the oil could dribble out into the take-out container.  I filled the container three times.  The first time all went well.  The next two times not so.  As careful as I tried to be with the hot motor oil, the Mississippi soil this day has a small oil spill in it.  The oil drain plug got too hot to hold, it slipped and I had too warm for comfort motor oil running down my arm.  So much for that morning shower.  Finally I had the oil level correct, put tools and rug to lay on away, and a half roll of oily paper towels and rags into the trash can.  I then tried to clean myself up the best I could after discovering my shop hand cleaner had long since dried up with only a thin film on the bottom of the tub remaining.  I still felt dirty not to mention being thoroughly soaked with sweat from the humid Mississippi air.

I then had the bright idea to drive back the ten or so miles back to the campground and take another shower.  Being at it was still well before check-out time they let me right on in thinking this California Boy just went out for a little morning drive to enjoy the coast.  Yeah right.  So the above photo is me later having lunch along the Mississippi beach front, by myself, thinking what a stupid thing I had just done and how I barely got away with it.  What next?

Hahaha, love your adventures!
It takes time, but we laugh about the things we've done during our trips. ;-)

Its one of the treasures of traveling, The more time goes by the better the story. Nice one.

What a story! I suppose Sinbad made the picture of you?

oh, i like that photo a lot!!! amazing that the oil registered so low when you first checked the levels. sheesh! what a mess!

glad all turned out well for you. I really like the image.

I like your pictures. The empty beach and large sea horizon give a good feeling of freedom and peace. It gets pretty steamy down there though.

A good cautionary tale to keep a close eye on the oil level. I like the tie in with "keep MS clean"!

OOPS! Glad you didn't ruin your engine while on this adventure!

Nice story, I'm trying to incorporate more stories into my blog too instead of just travel related info. Funny you had a picture to go with it.