I think I went into this with too high of expectations.
I am often guilty of such actions.

This is the National Memorial to Abraham Lincoln's Boyhood Home.
It was nice. I watched the video. I had the auditorium all to myself too. That was nice. 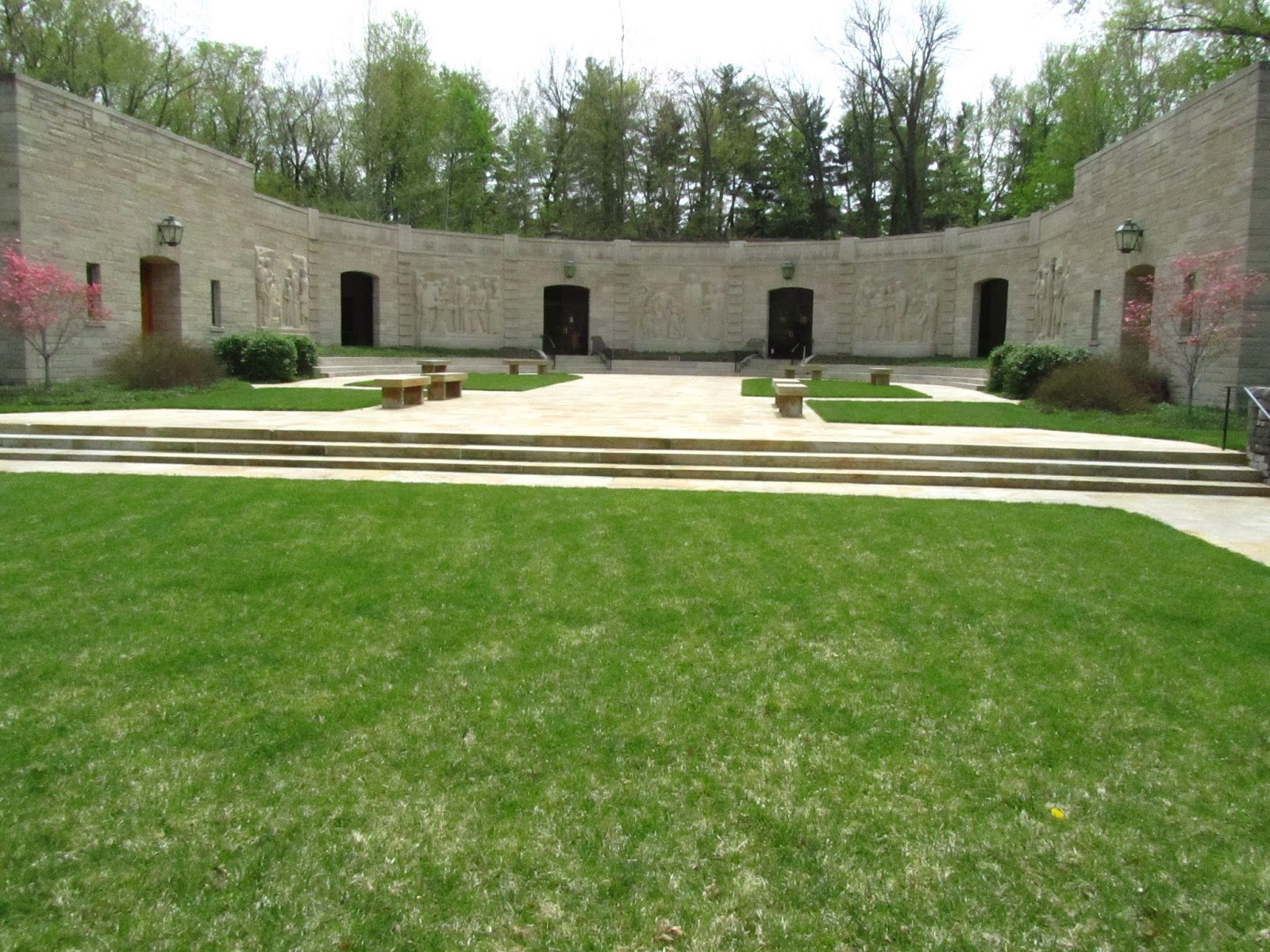 I think what fascinated me most inside was about the death of Abraham's mother, Nancy, from 'milk sickness', something I had never heard of before.  She could have been given a simple mixture of baking soda and sugar water and recovered, but they didn't know that back then. I thought this very sad for Nancy seemed to be a pretty remarkable woman.
(click on any of these photos if you wish to read the writing) 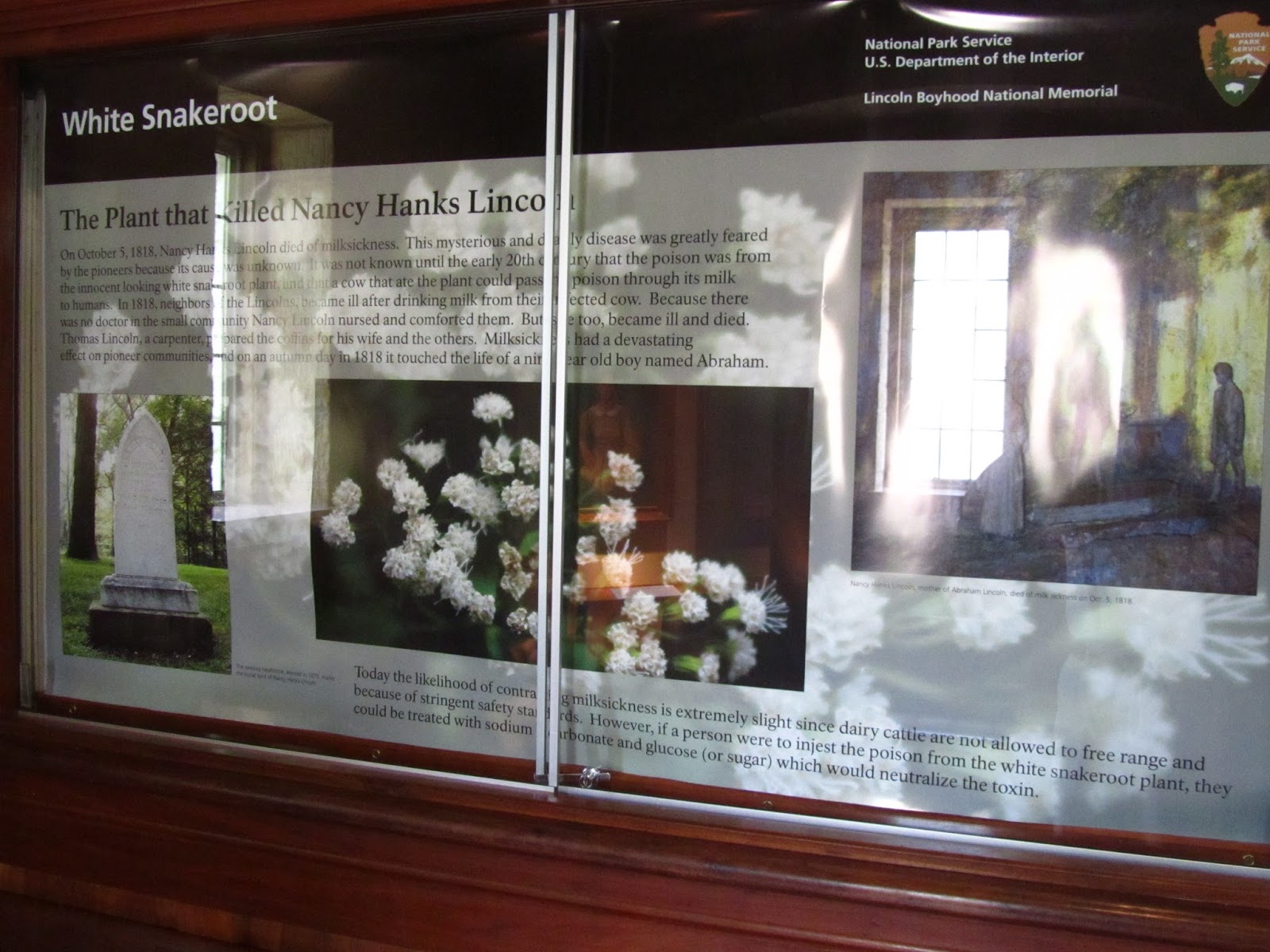 So I left the Memorial to take the short walk to where Nancy was supposed to have been buried, but like most things of such nature that I come across in my travels, no one really knows for sure where she was buried.

There were some people ahead of me on the walk, talking and yaking, looking at their cell phones, doing what people normally do.  Meanwhile I fell back doing what I normally do - be quiet and observe. It was then I heard some rustling in the leaves by my feet.  There I saw a black indigo snake.  I briefly thought about saying something to the people up ahead, but only briefly.  My better judgement prevailed and I kept my discovery quiet. 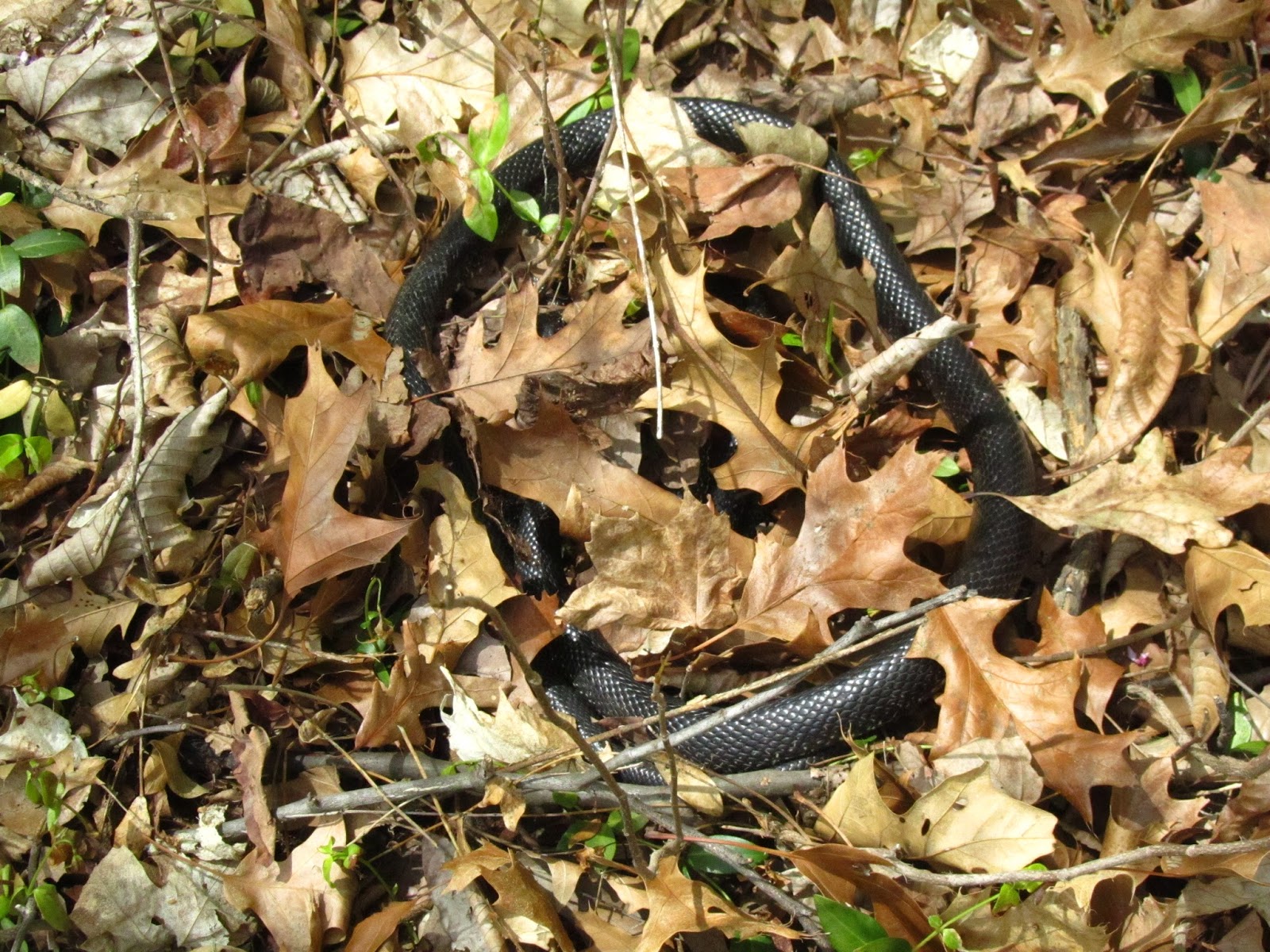 Upon closer inspection I saw that there were two snakes and one, somewhat smaller was attacking the other.  Well this must stop.  So I got a stick and tried to separate the two but the smaller one was adamant about not stopping his aggression.  Then I found a third snake in the leaves.  Finally the dim light clicked on in my head - this was mating season and I was interrupting snake love.  I tossed the stick away and left the snakes to their love making. 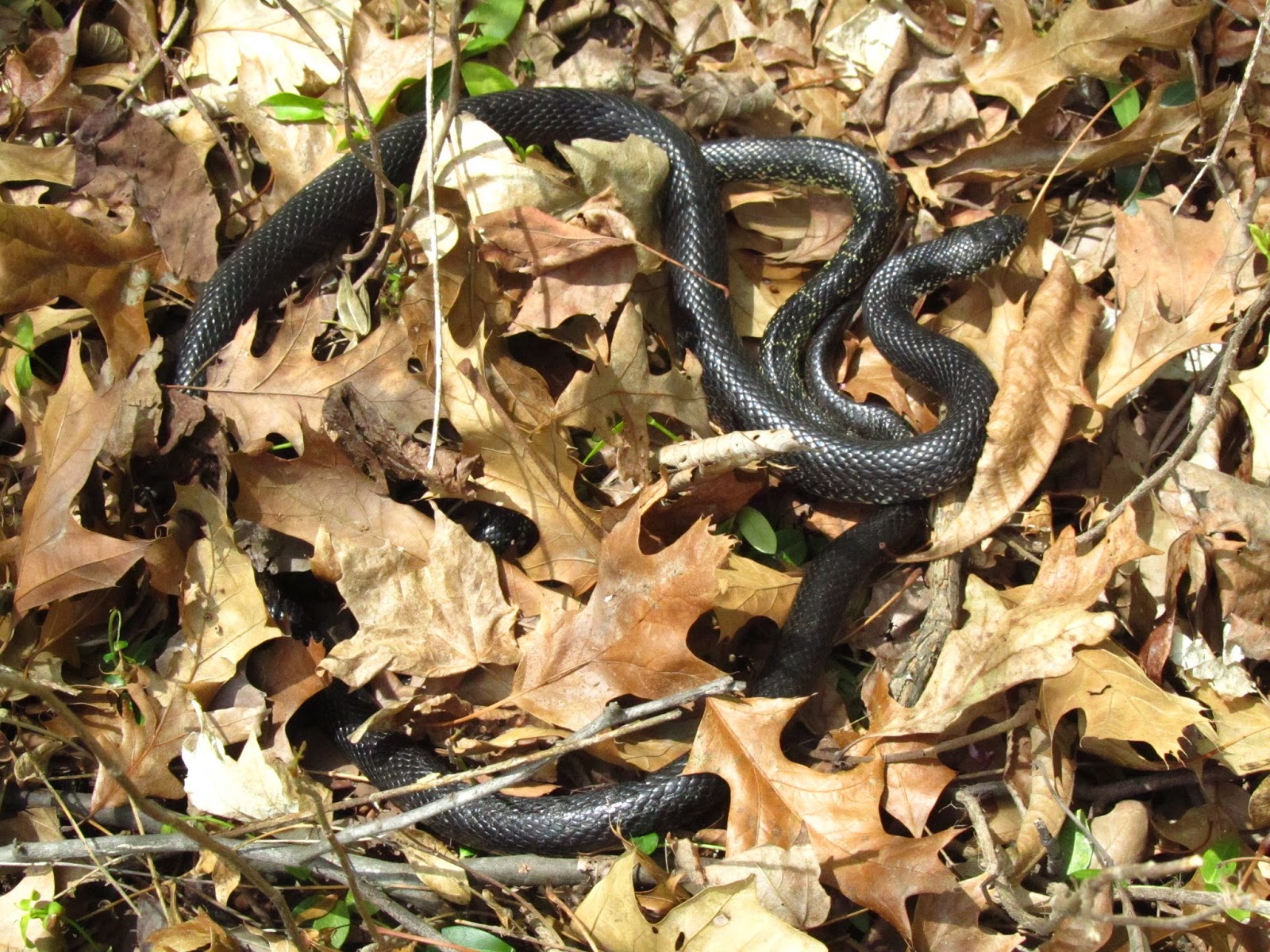 I continued on with my walk. At the supposed grave site I caught up with the people.  Among them was this loud, annoying, know-it-all woman.  I didn't linger nor take any pictures.  I was told by a park volunteer that Abe in his later years returned to his boyhood home site and said "this is where my mother was buried...I think"

On to the cabin site itself. 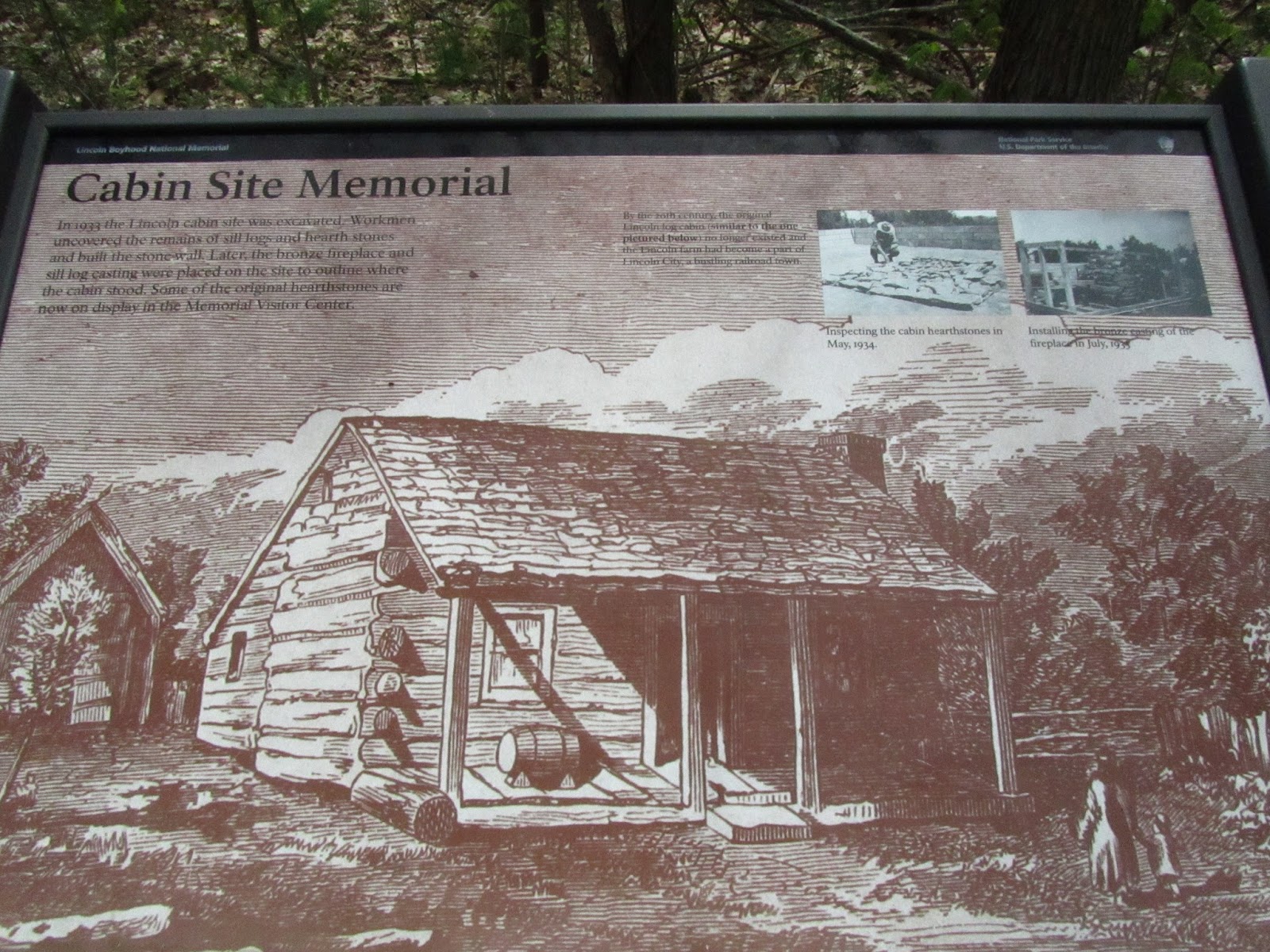 And so here it is, marked out by a cement border showing the perimeter of the cabin and a reconstructed hearth all safely protected behind a stone wall.
Wow! I was really "feeling it" by now. 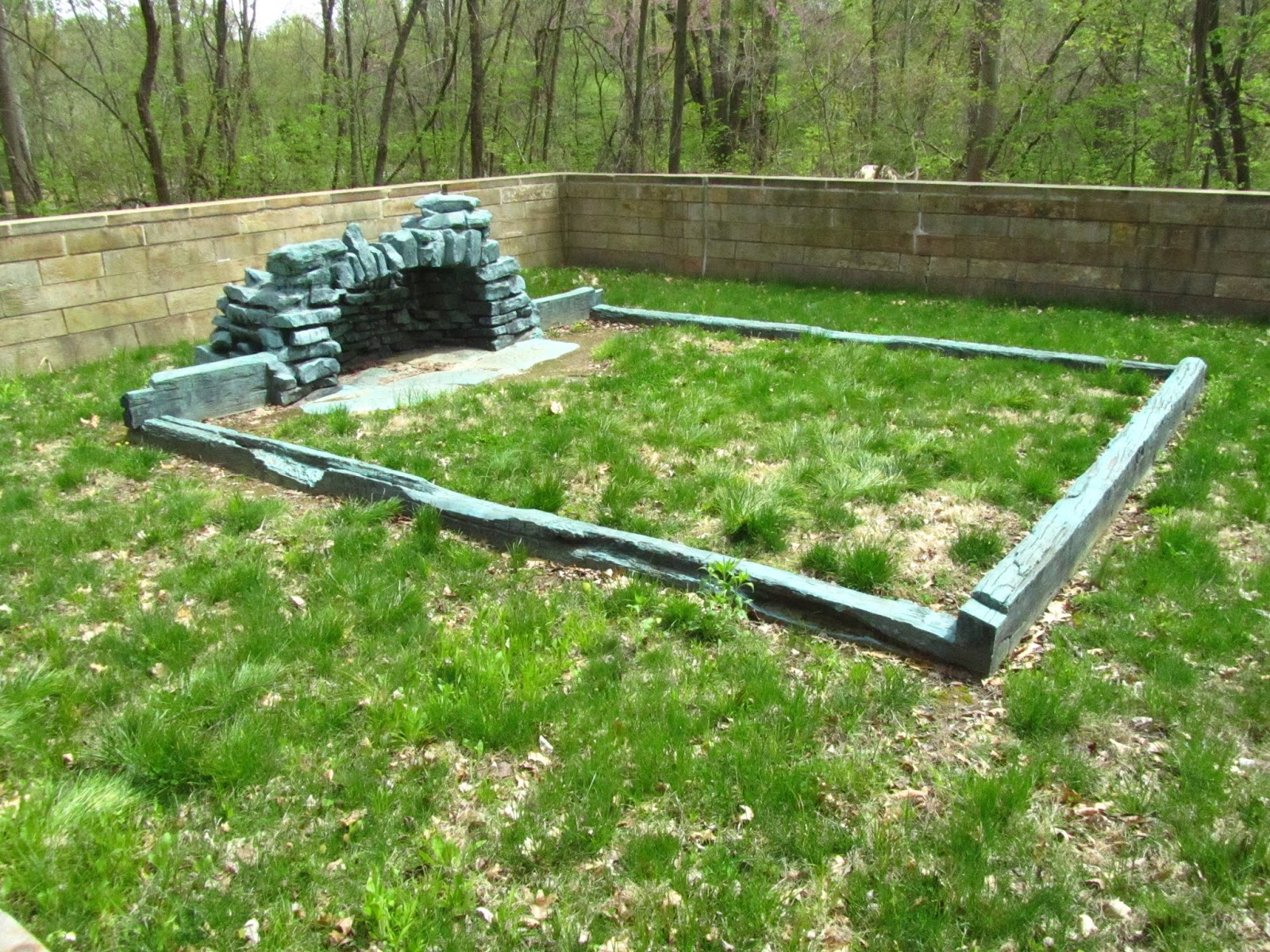 I'm sorry but I was pretty cynical about all of this. Really?
I would have been more impressed just to see a cleared open space in the woods with a sign stating
From archaeological findings it is believed the cabin stood in this vicinity. 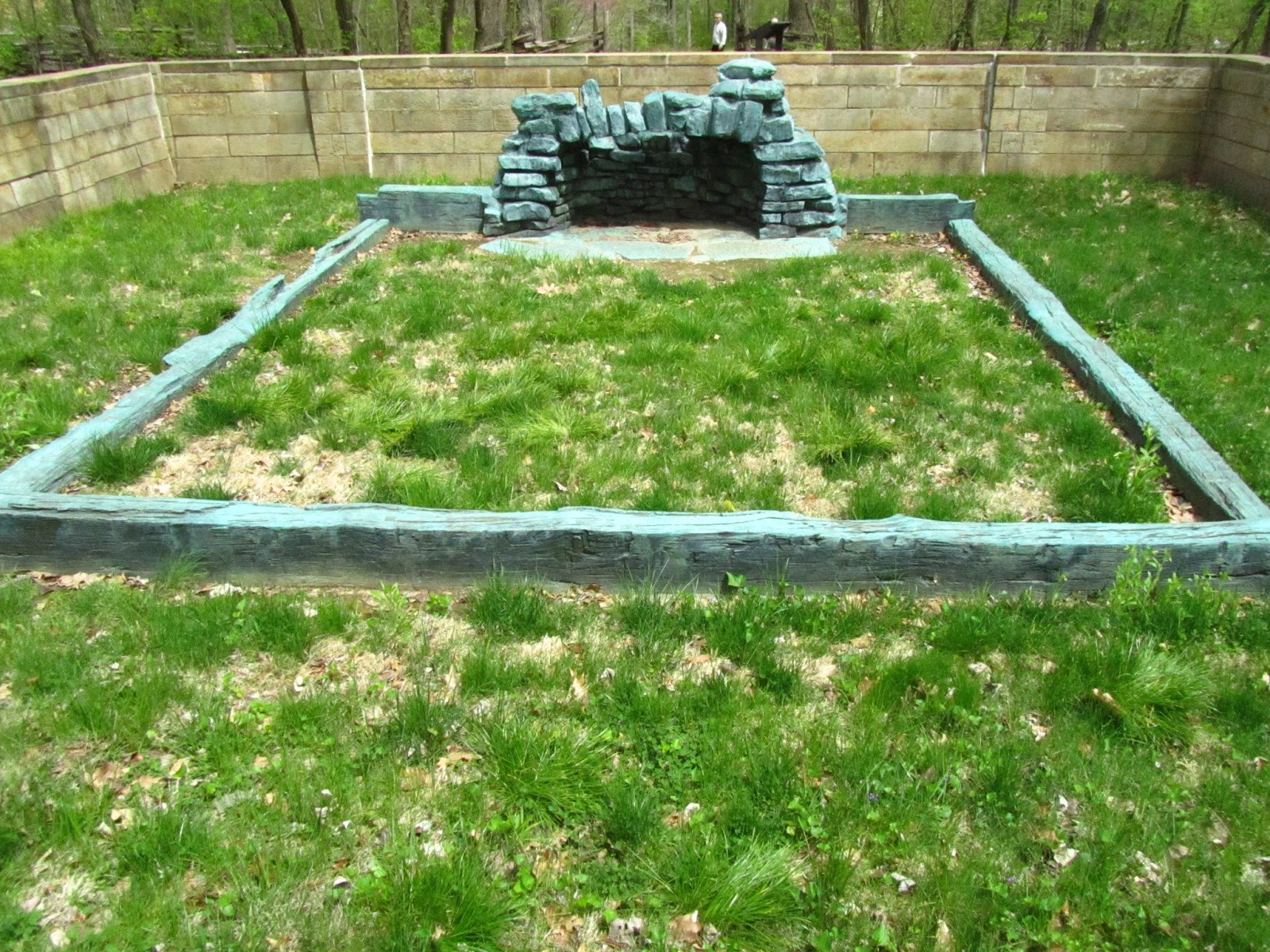 I ventured on further to a reconstruction as to how the Lincoln cabin and farm looked.
In all fairness this is listed as Living Historical Farm of that time period. 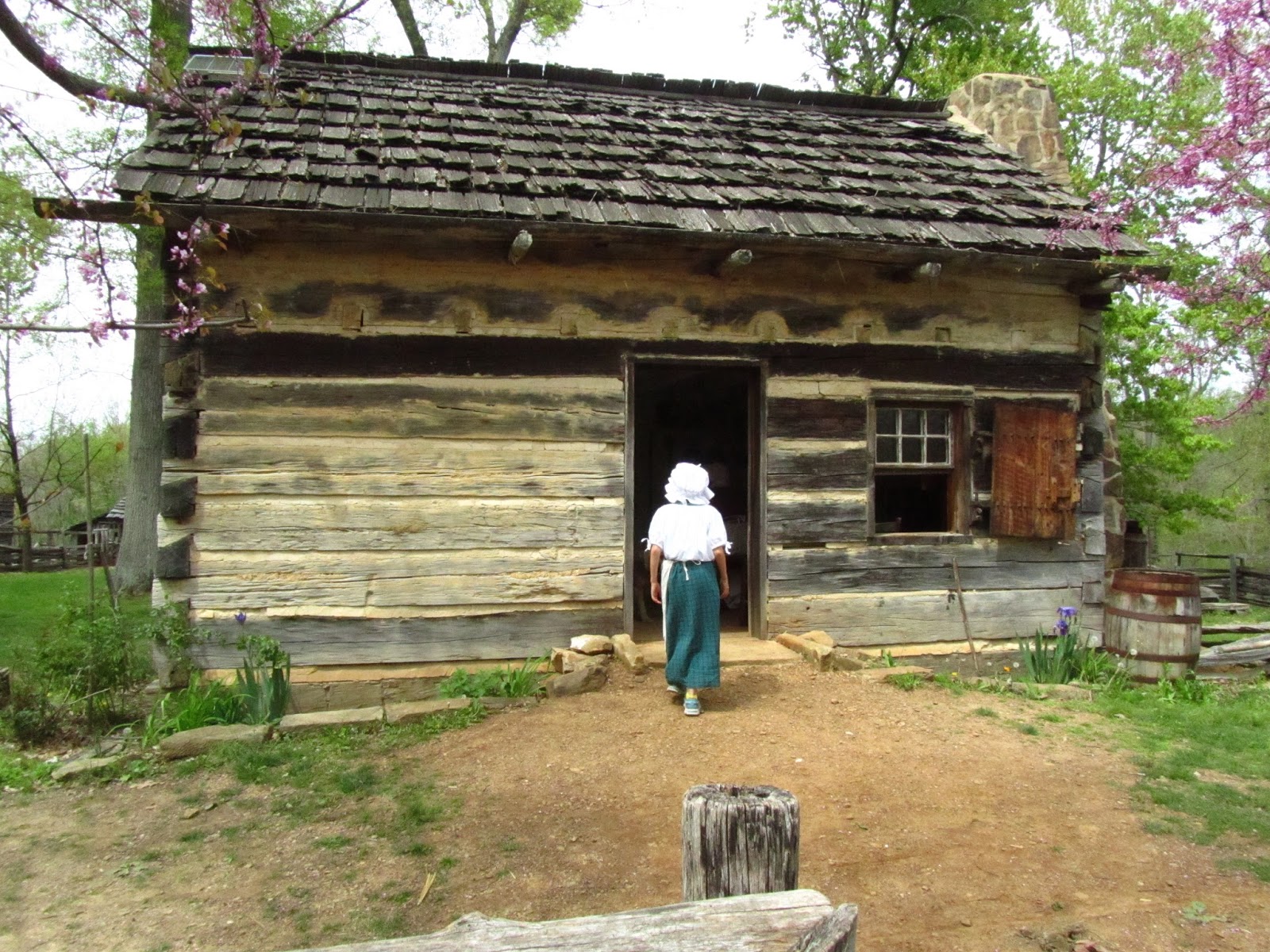 Nevertheless, I couldn't help but wonder Was a log cabin and farm really all this well constructed, neat and tidy looking back then? It all appeared too picture postcard perfect. 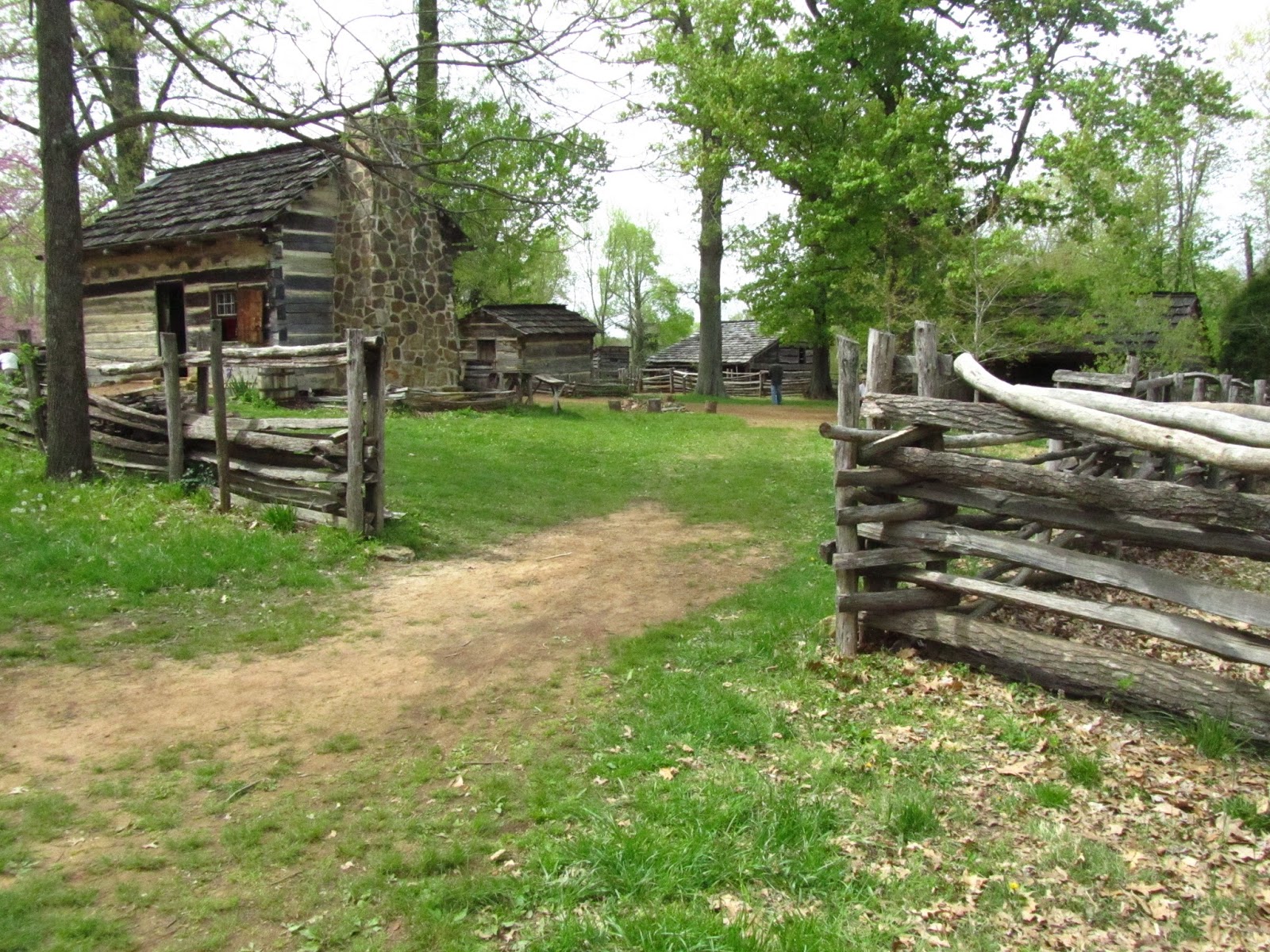 I took the long way back to the Memorial and parking lot, a path through the woods named The Trail of Twelve Stones. The 'twelve stones' turned out to be bits and pieces of buildings Lincoln had been in or at, securely embedded into small blocks on concrete accompanied by a bronze plaque telling you what you were looking at.
Again, really? 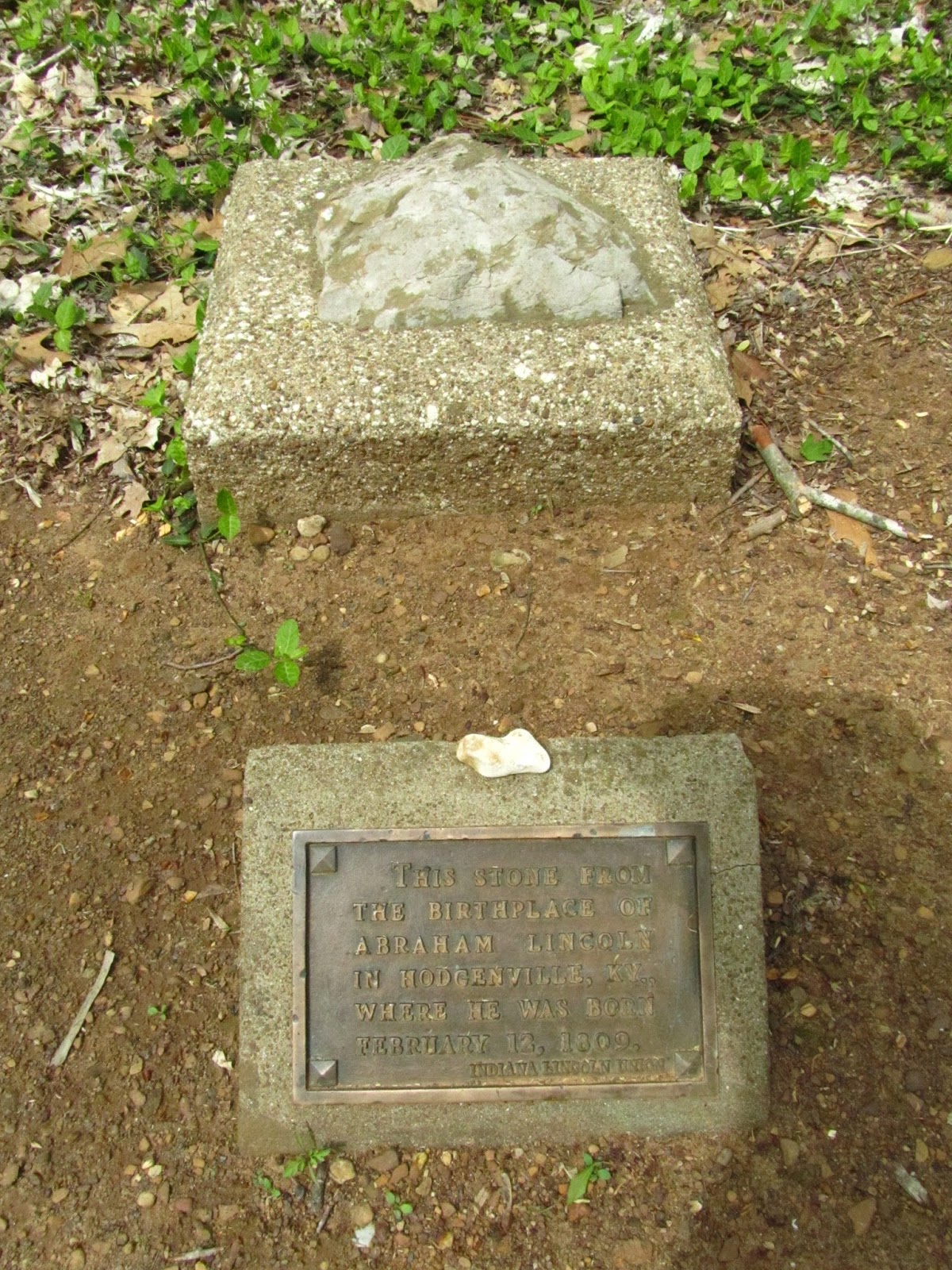 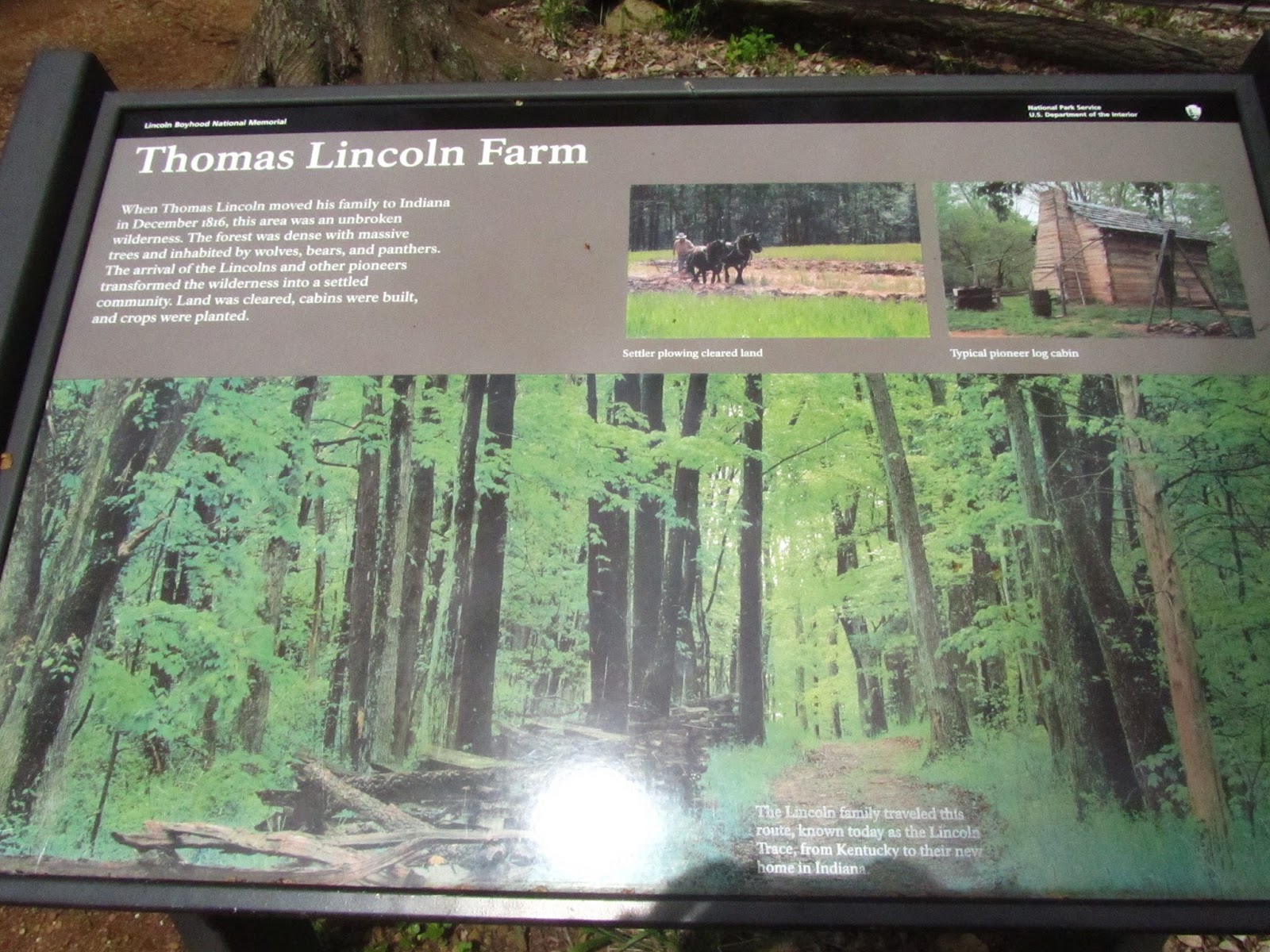 Other than learning about milk sickness and seeing the black indigo snakes make little black indigo snakes, this here really left an impression on me.  I stood along the trail thinking I had just moved my family up to Indiana from Kentucky, have arrived at the small piece of land that I purchased earlier, and here I stand.  I think I will build myself a home and a farm in this. 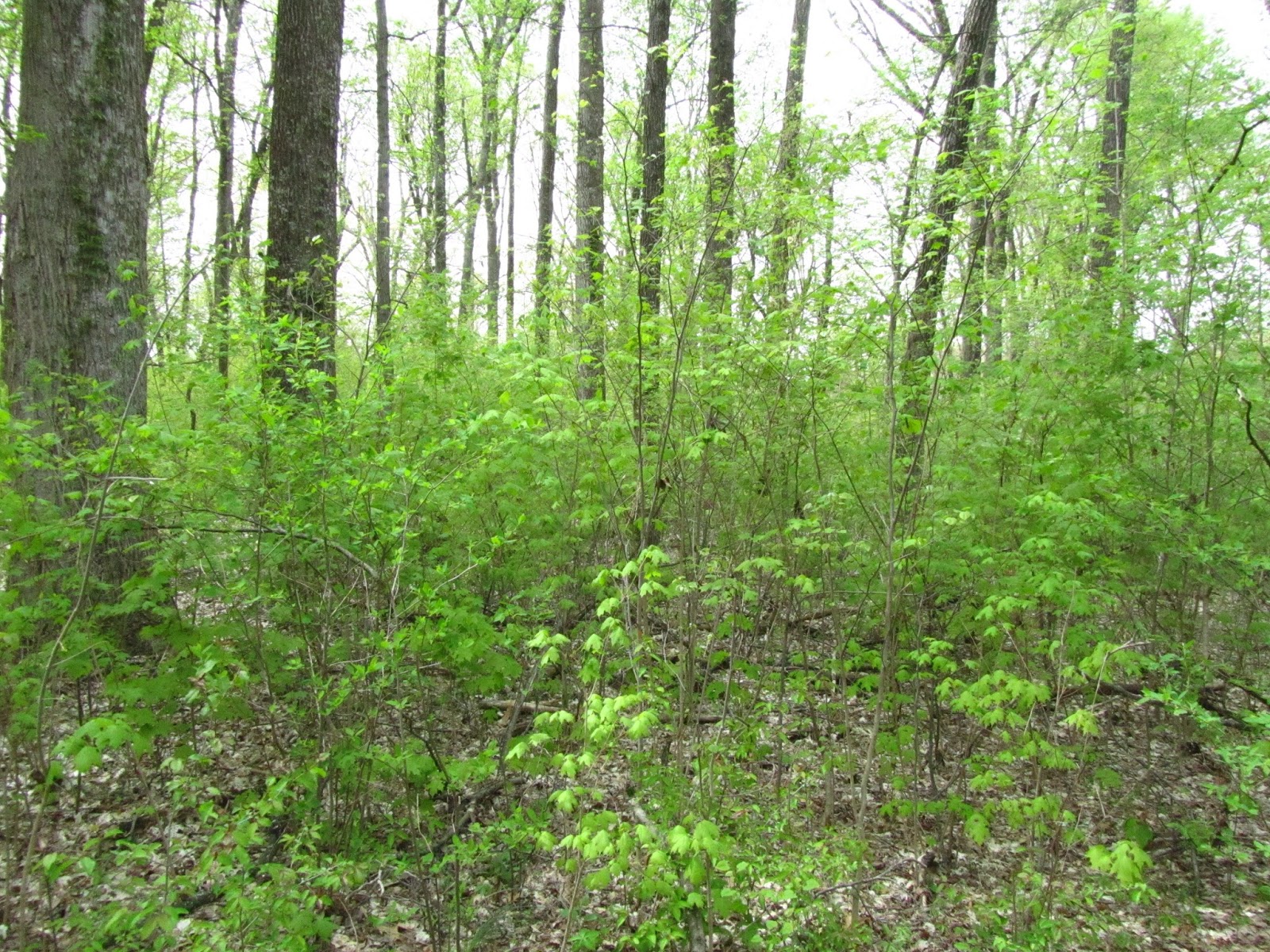 I couldn't picture it.  Where do I start? 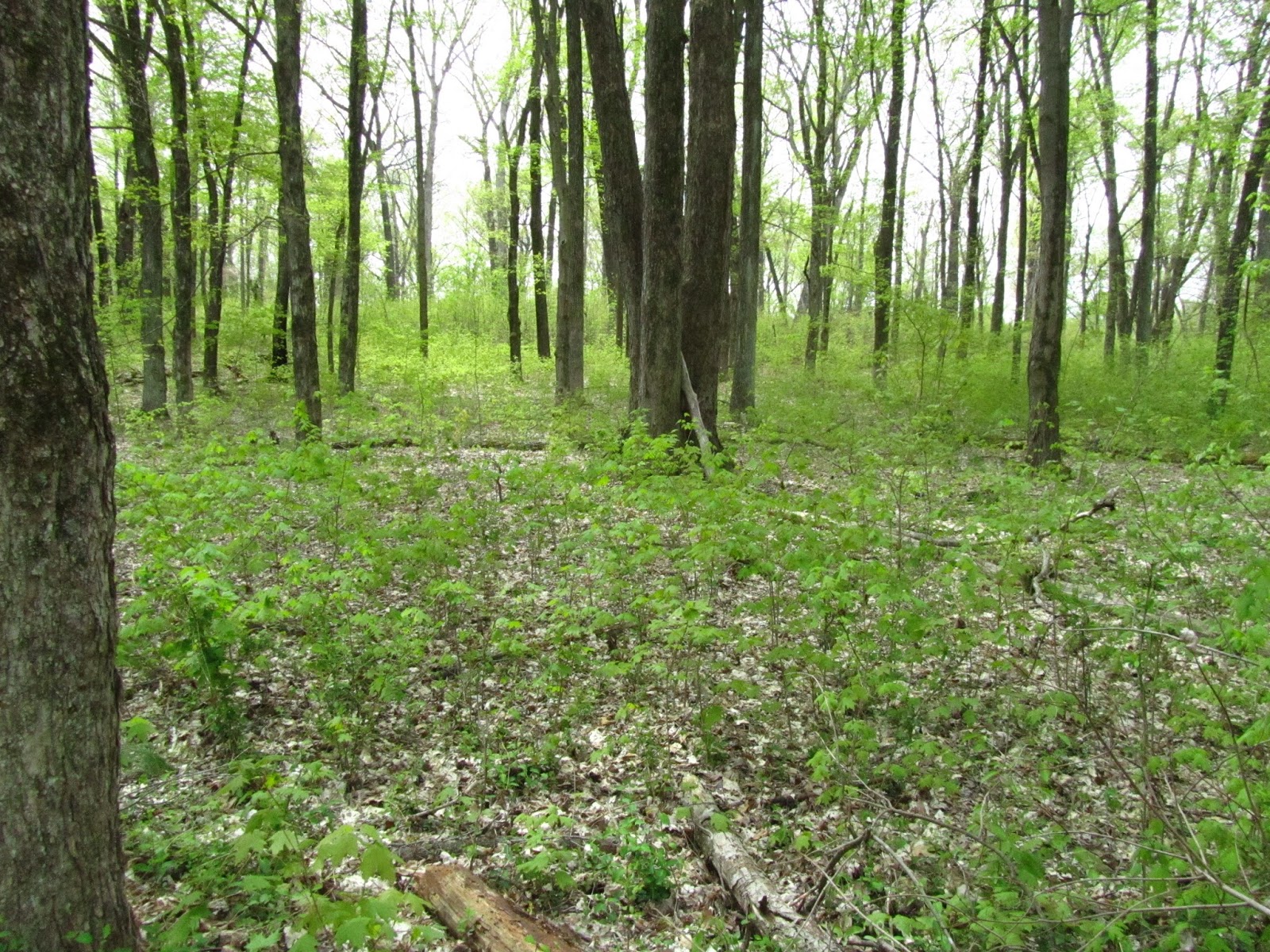 Our pioneering families were a tough breed to say the least.