You may recall my bringing your attention to Abe's left foot inside the tomb, well outside his poor nose has really taken some abuse.  There is a cornball belief that rubbing Abe's nose will bring you good luck.  In fact all it will give you his a handful of very nasty germs. 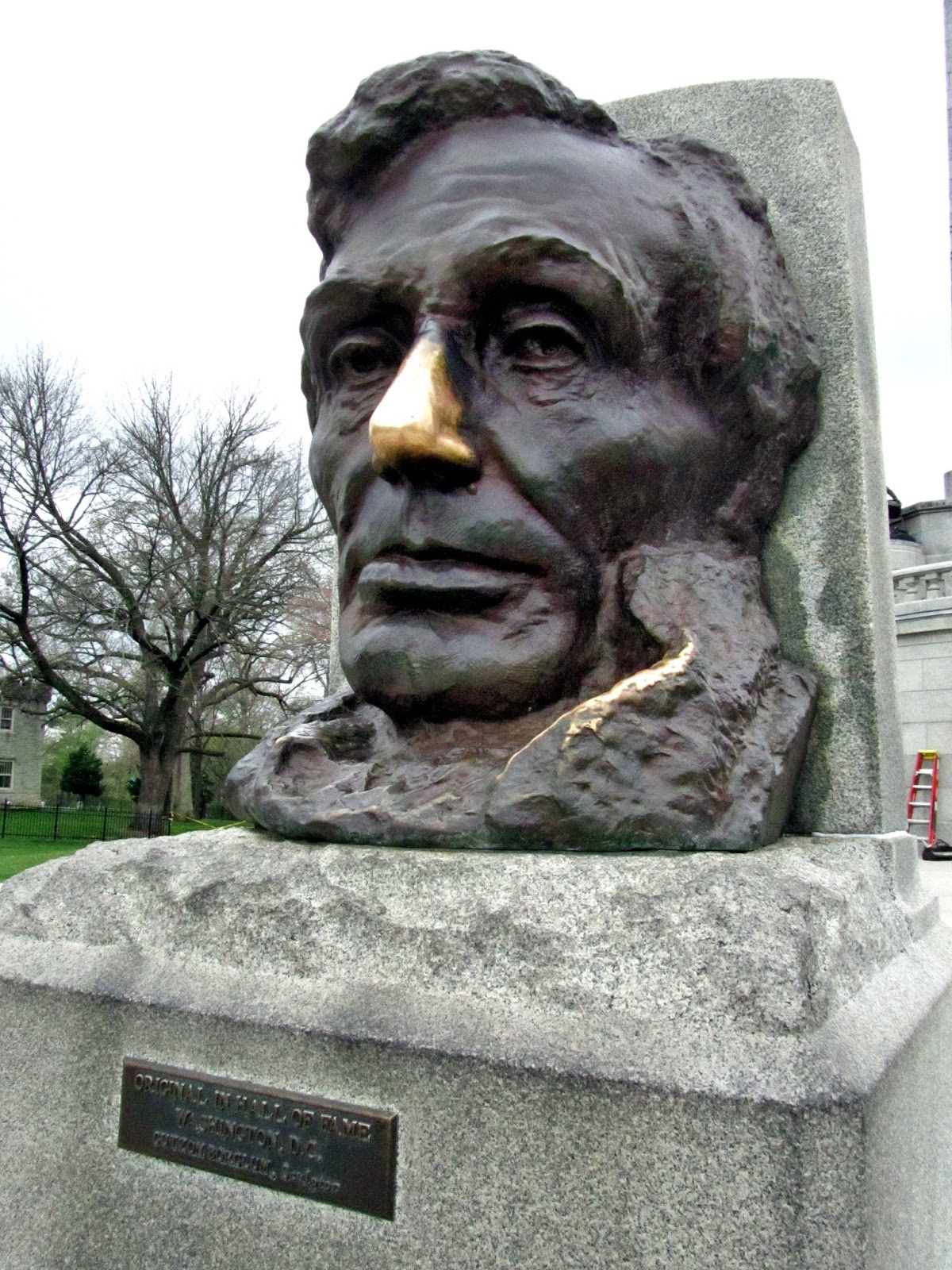 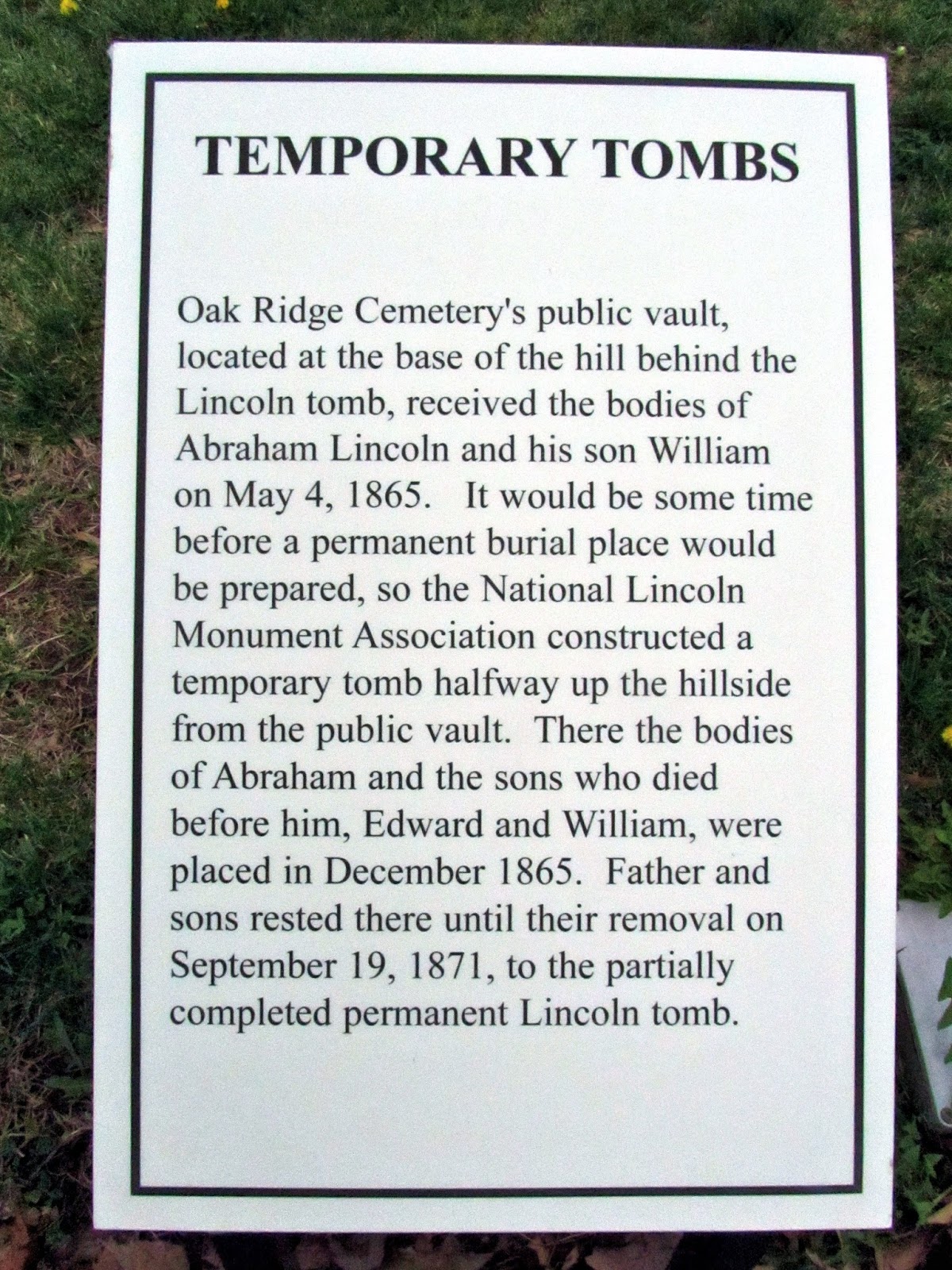 You can see Abe had only a short distance to go
to his final resting place above and behind his temporary abode. 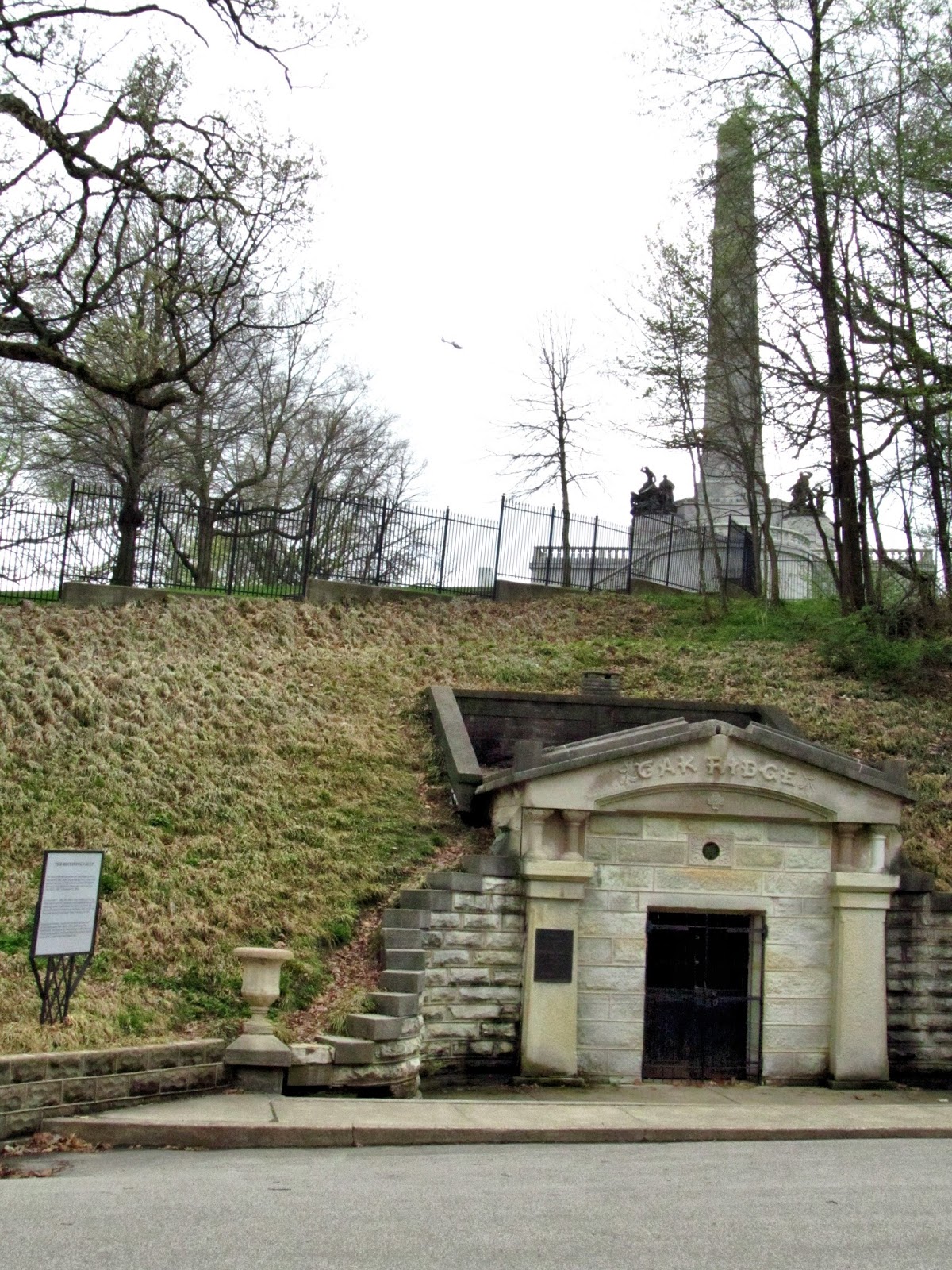 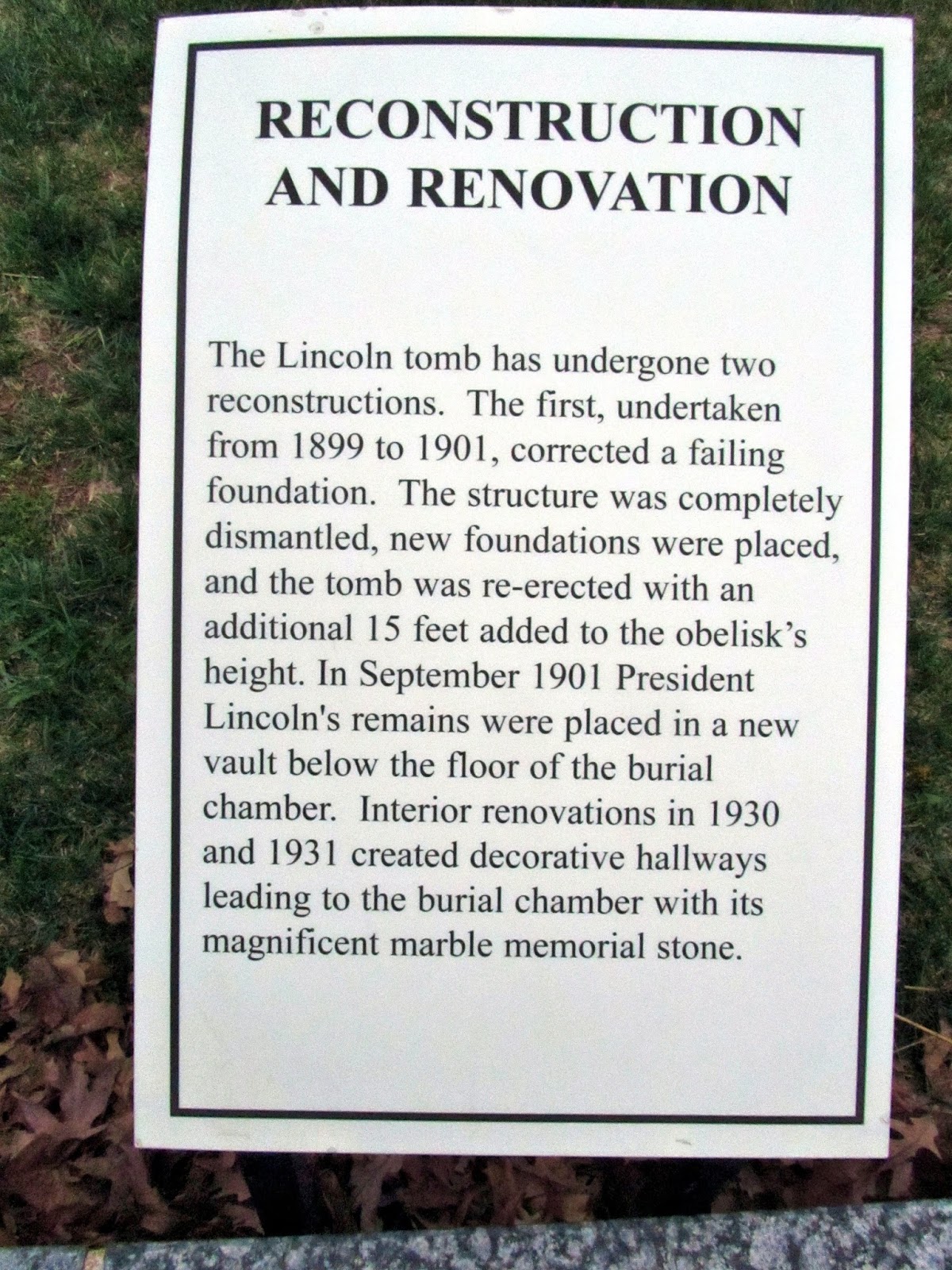 Good grief people, must we touch everything?  I just don't get it. 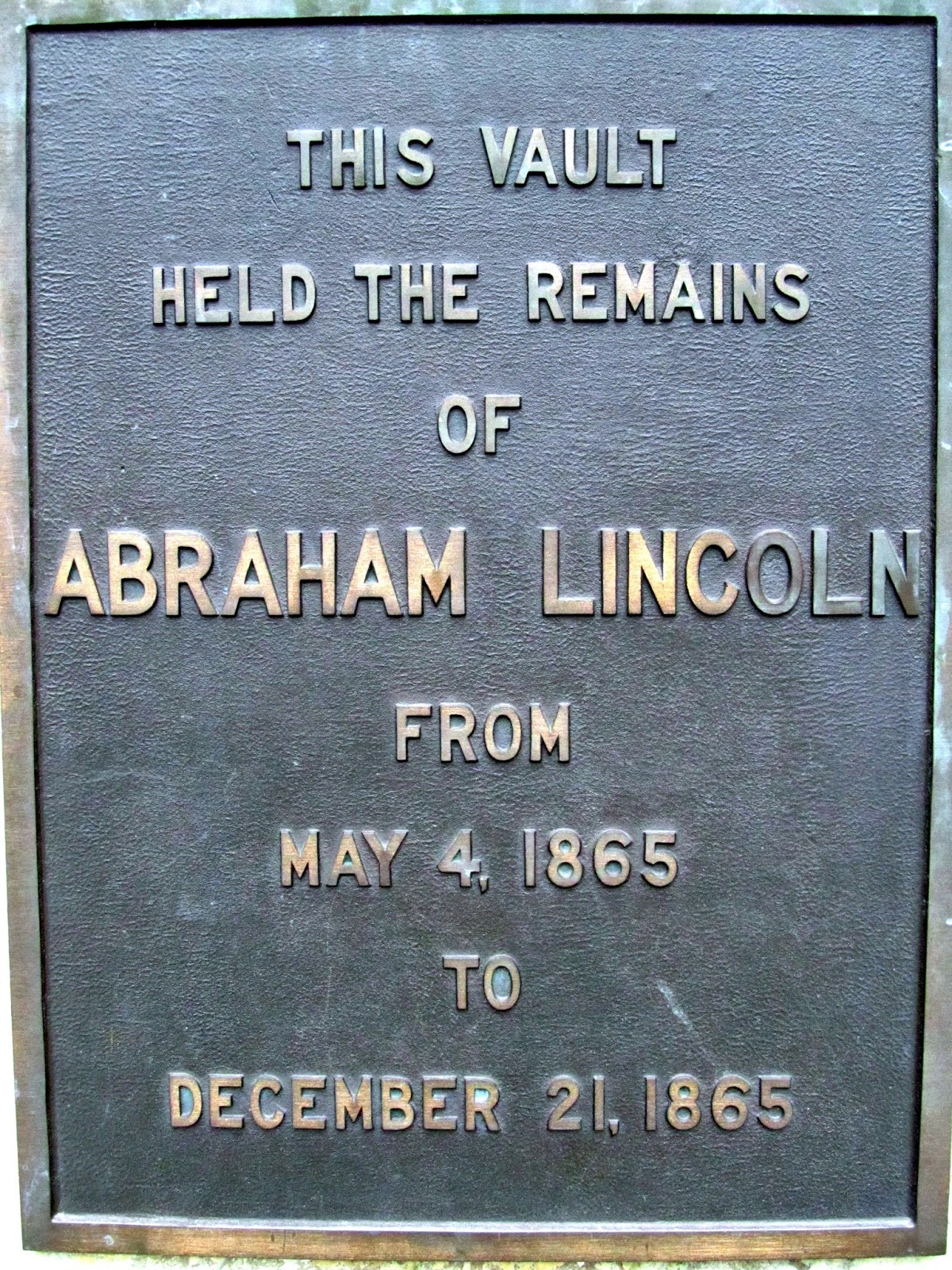 I had to take pictures through the bars of the top half of the iron gates for the rest of the photos. 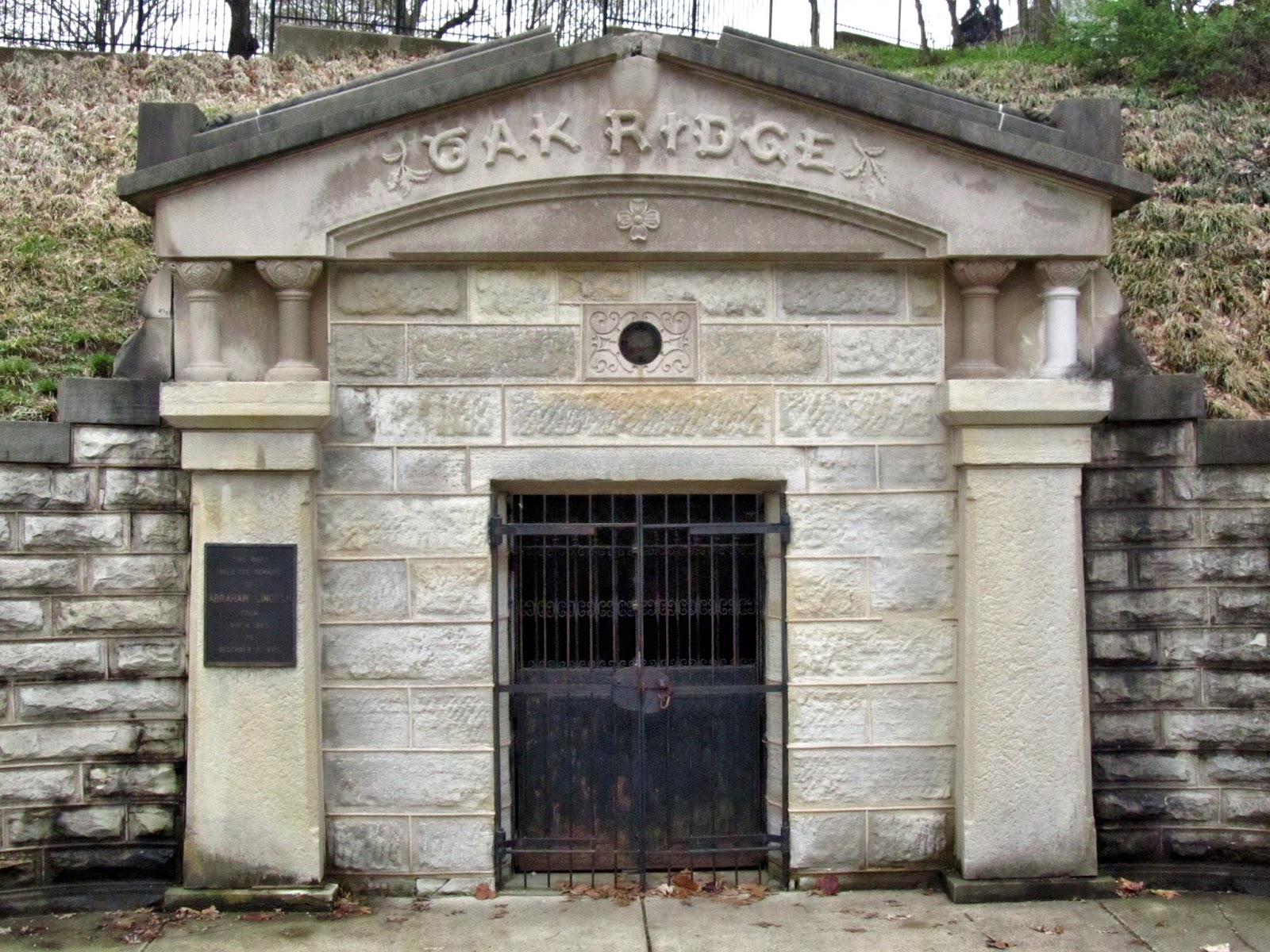 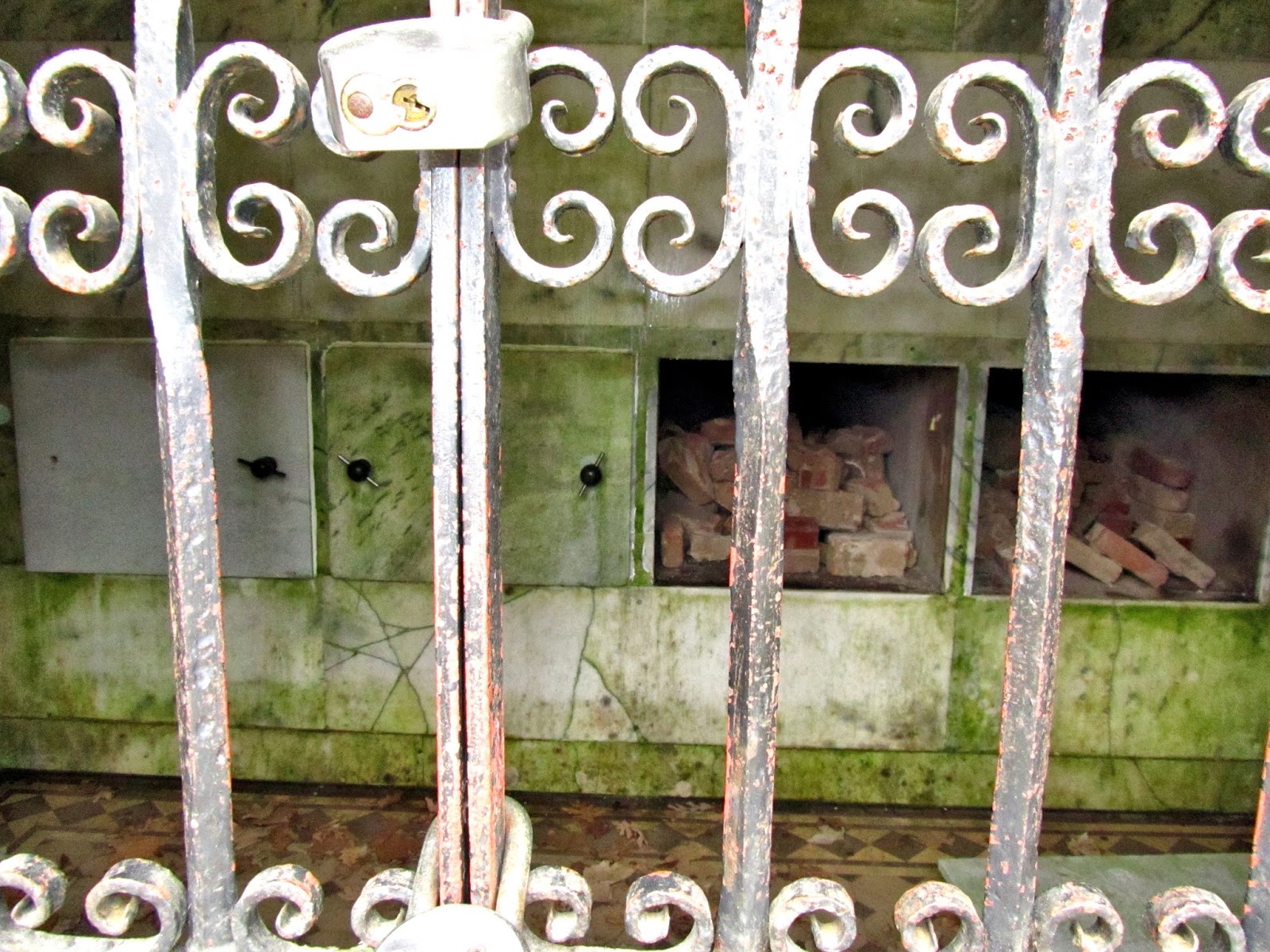 Hmm...does this mean there are zombies in the woods nearby? 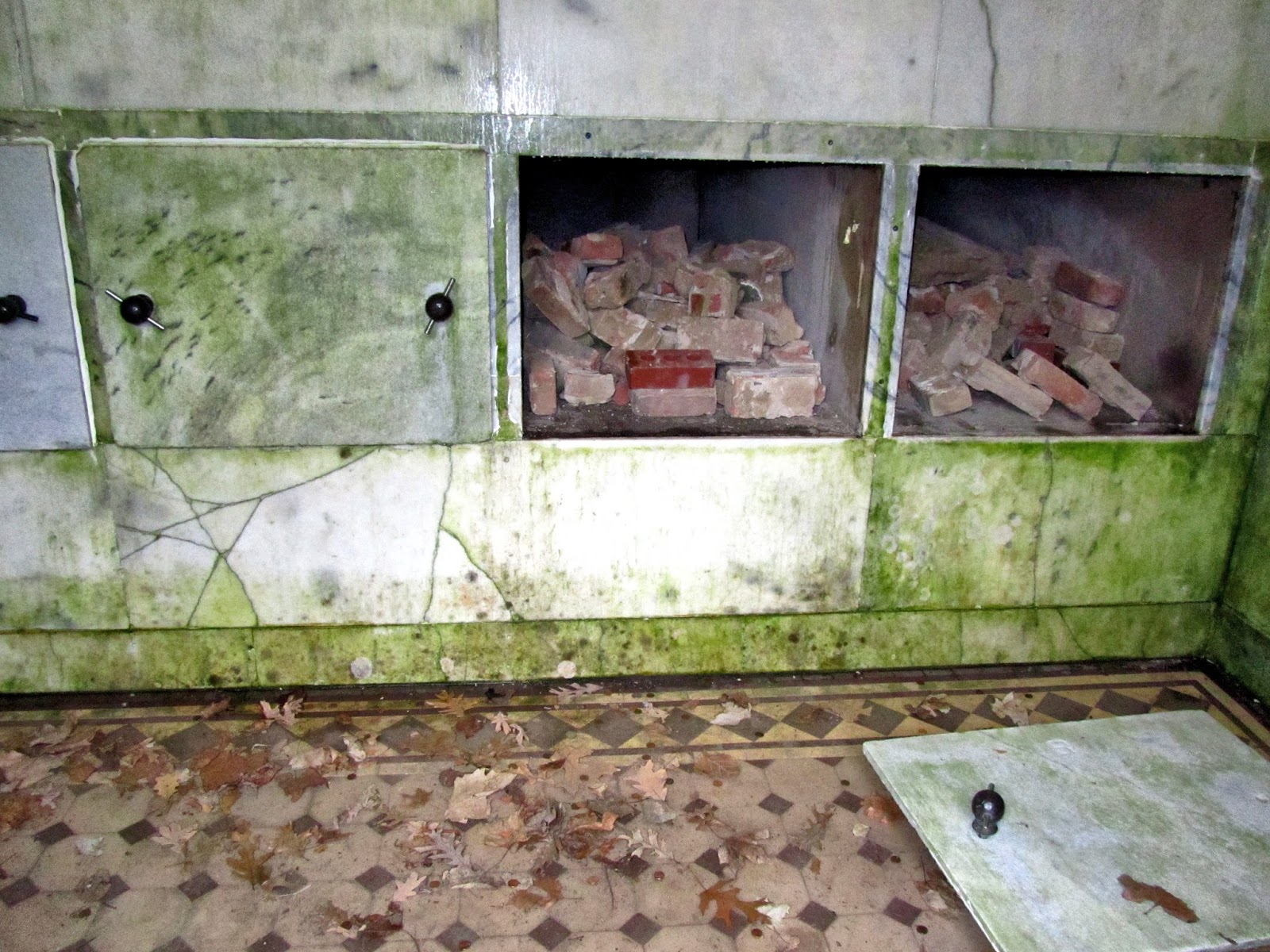 I thought the green was mold but looking up it made me think
it was the coloring in the marble perhaps. 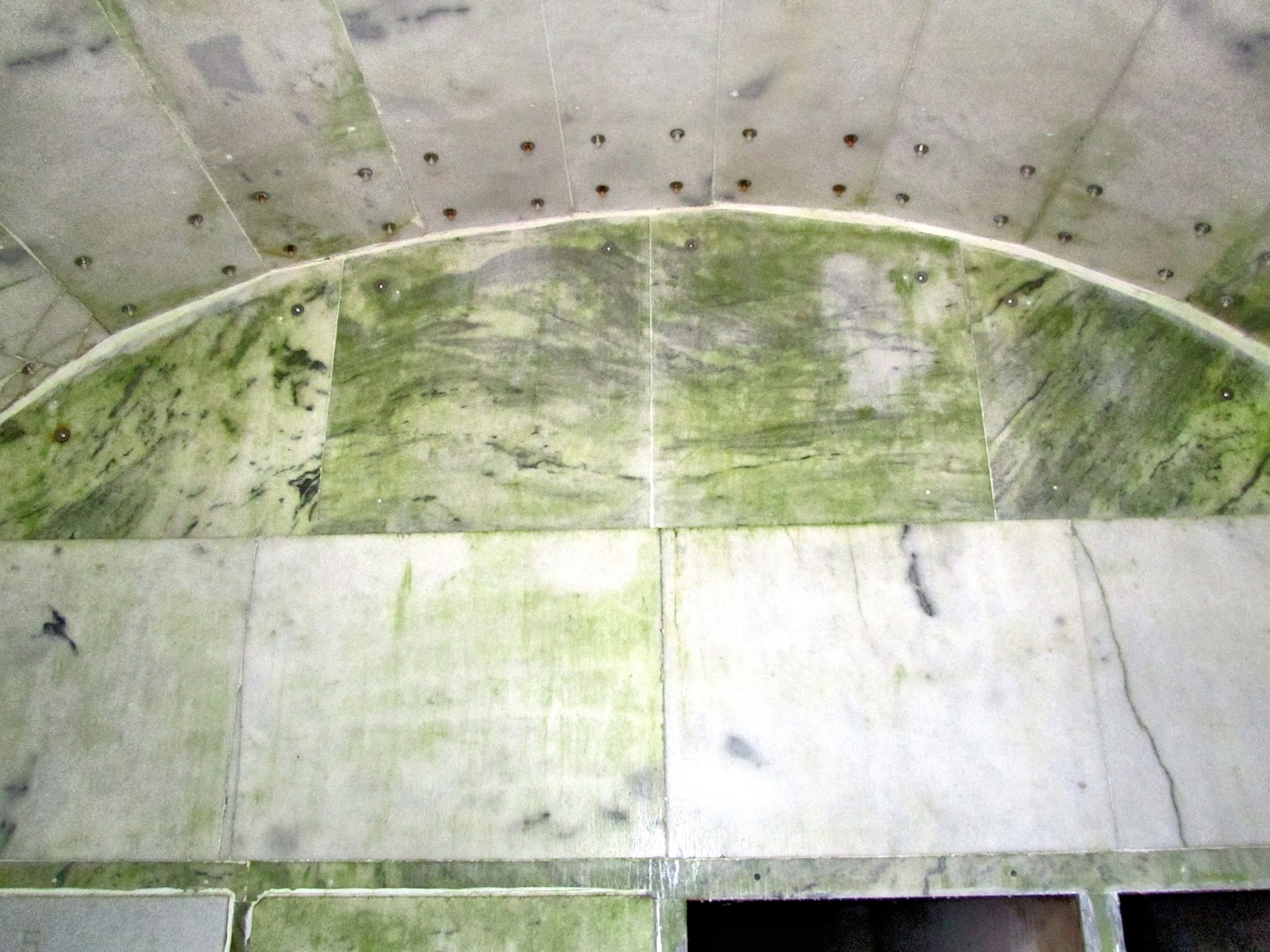 Gee, someone could put the doors back on the zombie vaults and sweep up the leaves ya think?
That wouldn't require much but then it wouldn't give me something to rag about on my blog either. 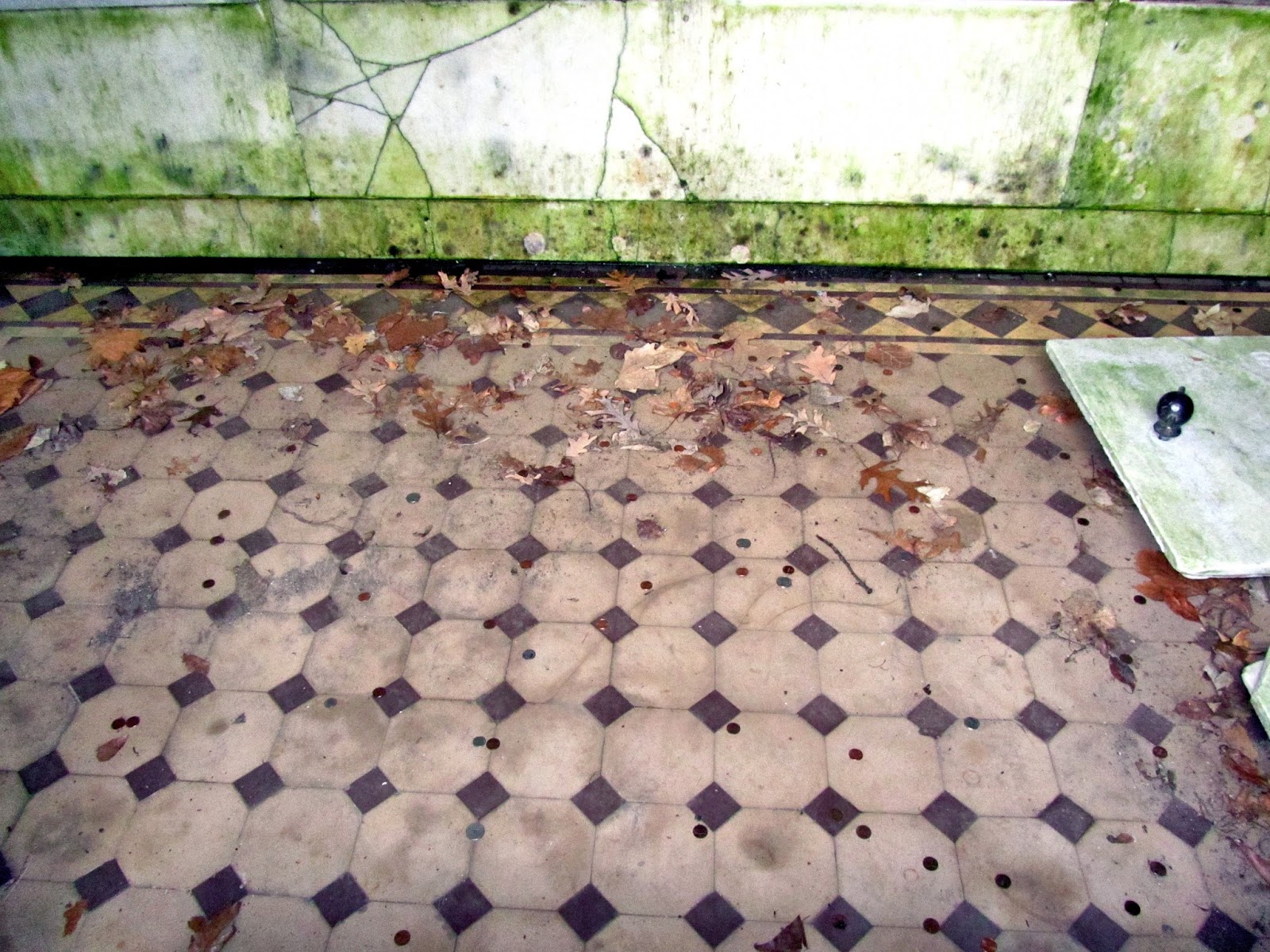 It doesn't appear being a Lincoln was a good thing in the long run. 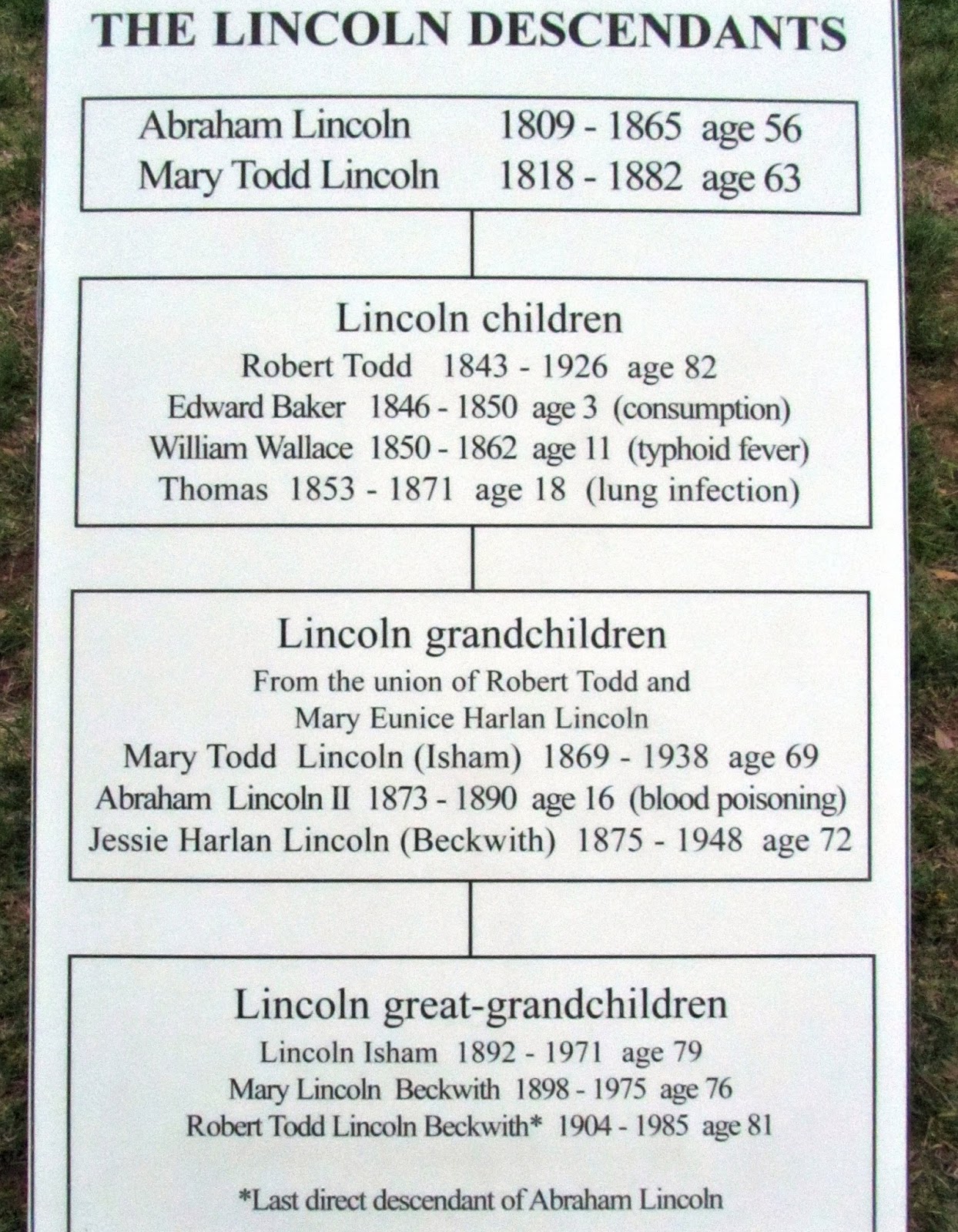 This country, with its institutions, belong to the people who inhabit it.  Whenever they shall grow weary of the existing government, they can exercise their constitutional right of amending it, or the revolutionary right to dismember or overthrow it.
- Abraham Lincoln

That rubbing sculptures is a plaque. You can see it at the most strange places. All those superstitious people, what do they expect. I bit maintenance of the marble could do no harm I think.Loosing three children at a young age must have been an ordeal for poor Abe.

How interesting that many people (so it would appear) believe that rubbing Lincoln's nose is good luck. Hmmmm.

I would love to see this someday...so interesting.

honestly, i'd probably want to touch his name, too, just to feel a connection to the man.

If the belief is correct then there must be an awful lot of lucky people around.

Here we have a mermaid statue underwater at a dive site. Abe L
incolns nose reminds me of her nipples!

The quotes give me goosebumps.
Lovely!

poor poor Abe Lincoln. that is so not cool. ) :

i feel sorry for the guy ... i do wonder about folks these days? i prefer taking pics over anything really ...so i am safe. ( :
i feel you are probably in the same boat - a friend of photos verse messing with a pieces of art, ruining it, or / etc.

You are still in Springfield! BE sure to go to the Lincoln Library and Museum...it's fabulous. He was an incredible man, but the opposition was very fascinating.

That would be something to see in person. Nice photos.

All the touching is probably the 8th graders who still probably come for a visit every year. I grew up in Illinois and we went for visit as part of our required Government class. I don't remember much, but I do remember rubbing that nose!

Nice photos. Much water damage was corrected before the 150th reenactment of the funeral. Please consider the supporting http://lincolntomb.org/