That Alabama Hills I imagine is a geologist's paradise. 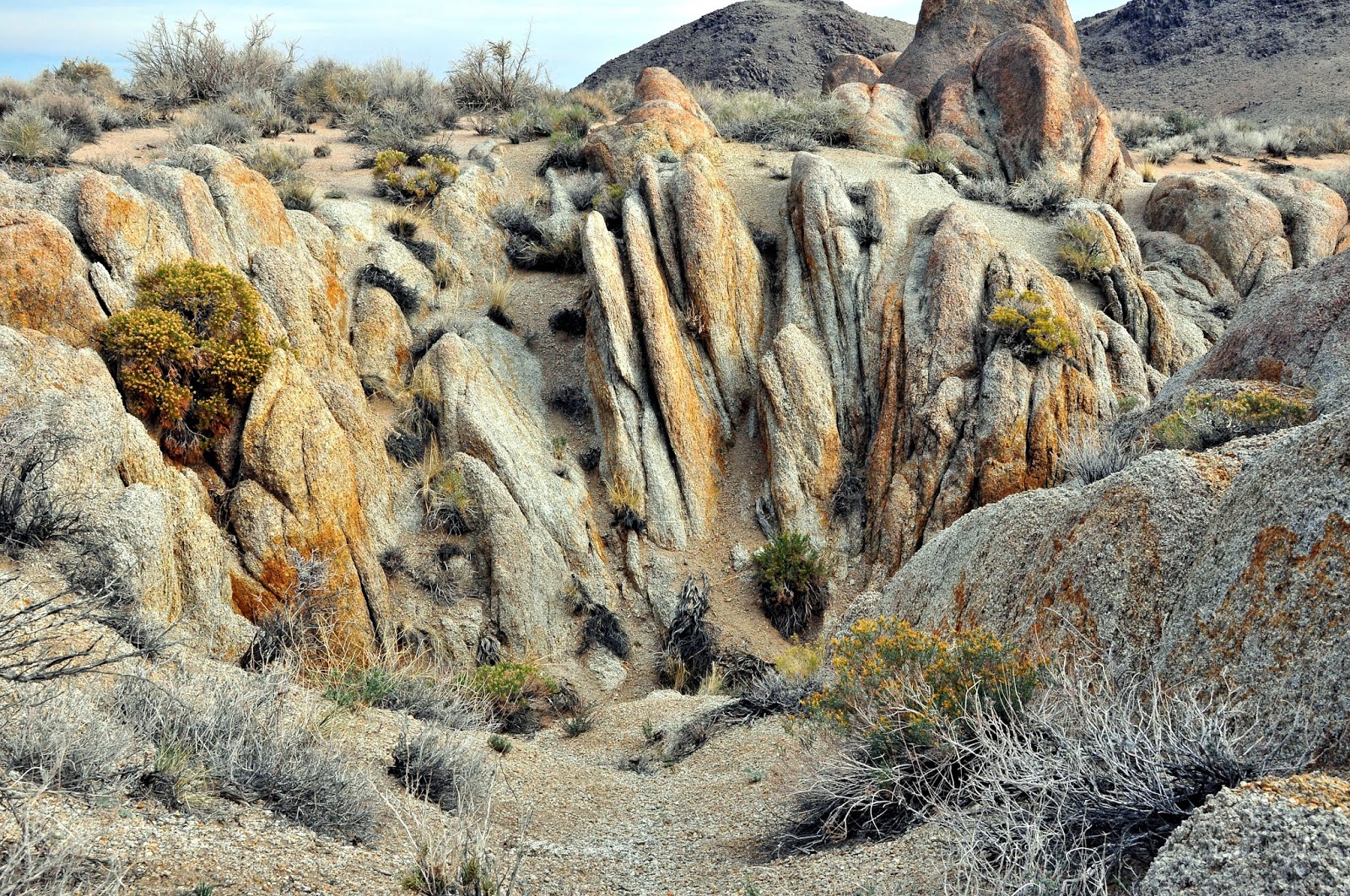 This is exfoliation where the rock breaks away in slabs due to expansion and contraction from the extreme weather temperatures.  Lizards and small mammals like the gaps left behind using them for protection from predators. 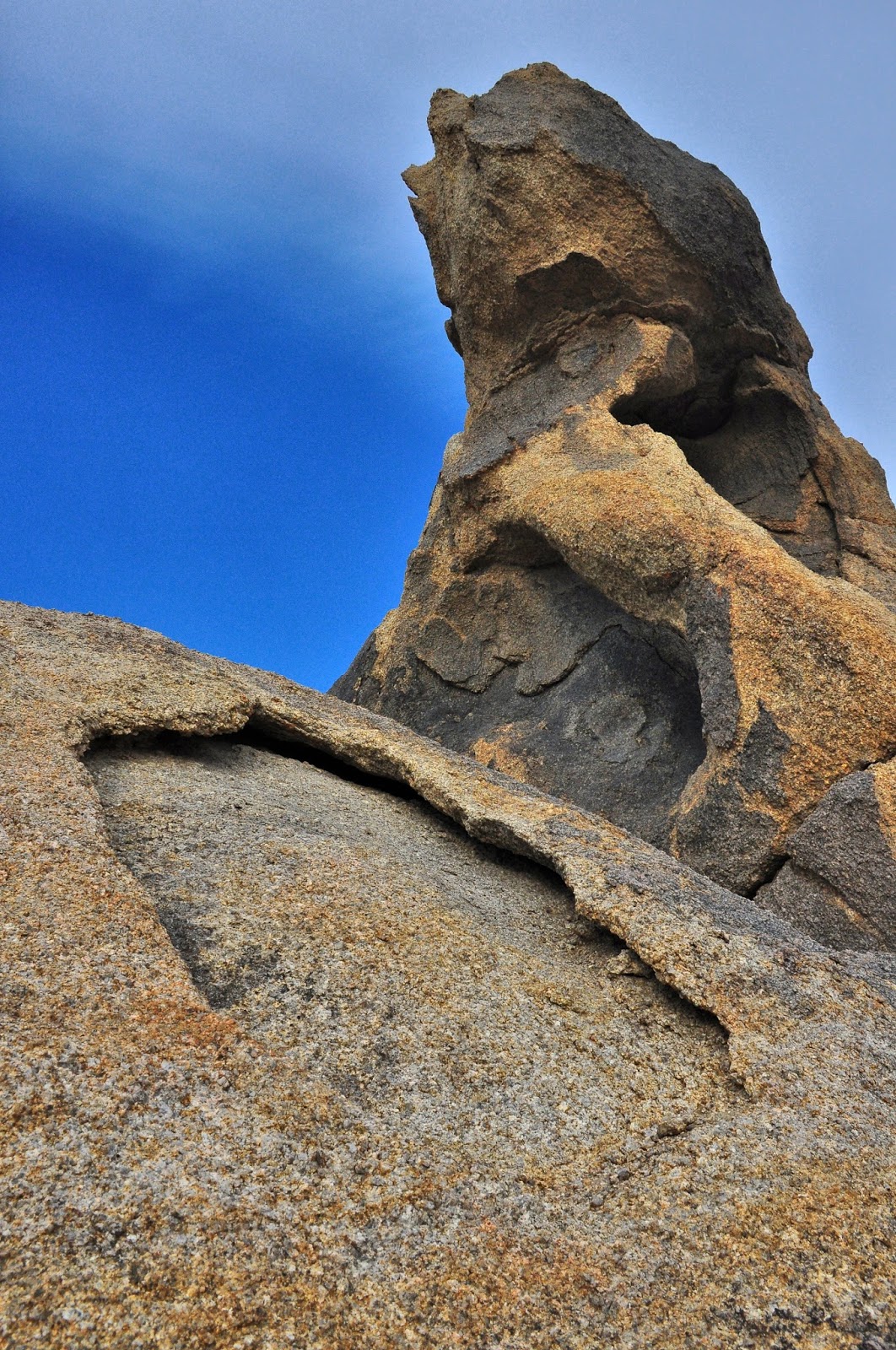 Same rock outcropping from a different angle.  This was one of those times (and they happen with more frequency of late) I started to climb up wanting to get a picture through the opening and part way realized I have no business doing this and slowly eased myself back down to the ground.  I cursed myself for growing old and no longer having the agility, bravado and foolishness of youth. 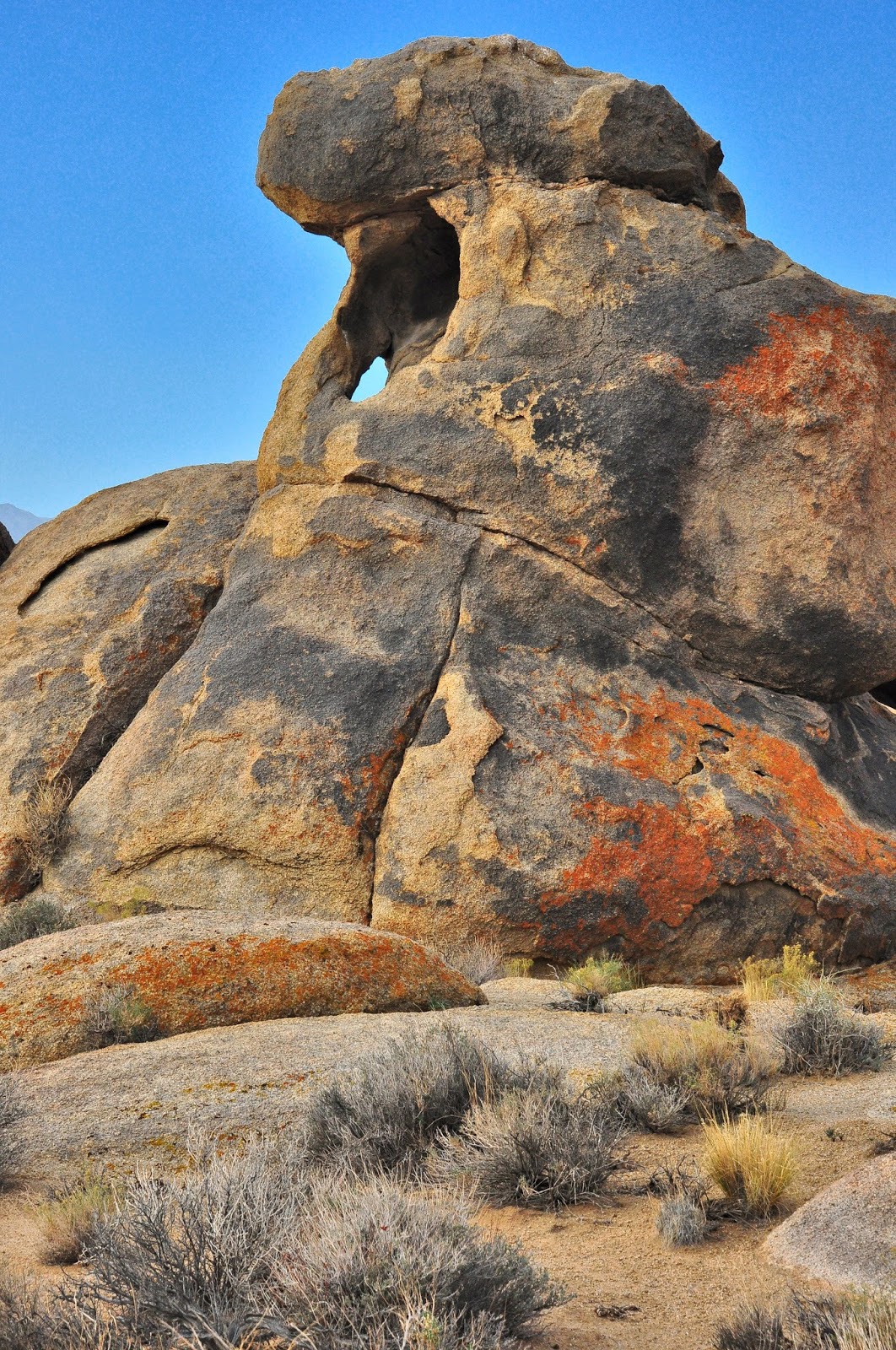 I saw this rock formation in several places.  The seam is of a different type of rock material and was only an inch or so wide.  Some places it was visible stretching far off into the distance. 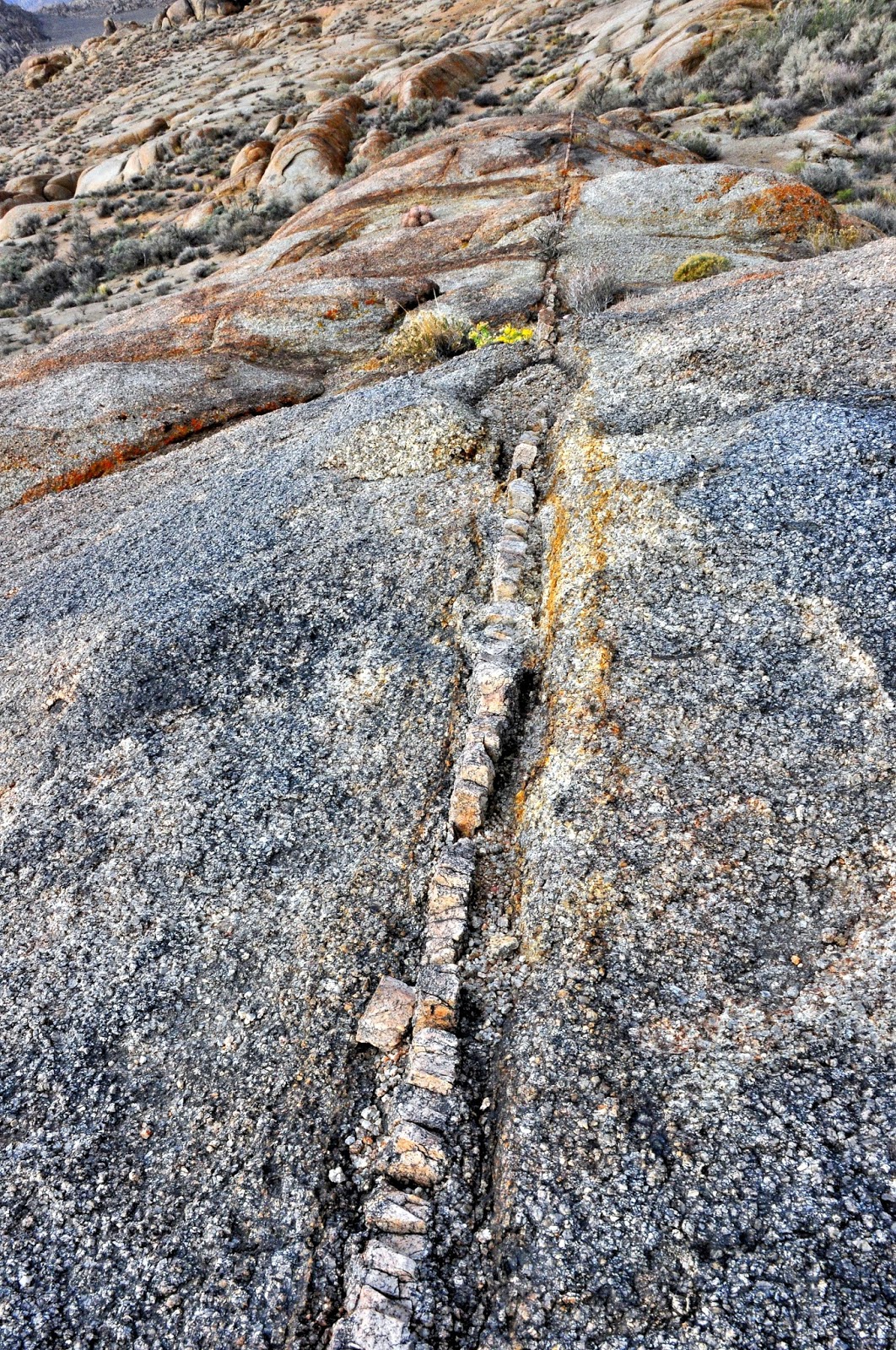 It is times like this I wish I knew more about geology just to know what really happened here to create this so very long ago.  Whatever it was I know at least that this land has since been tilted up on its edge by 90 degrees.  You can see that in the first photo also. 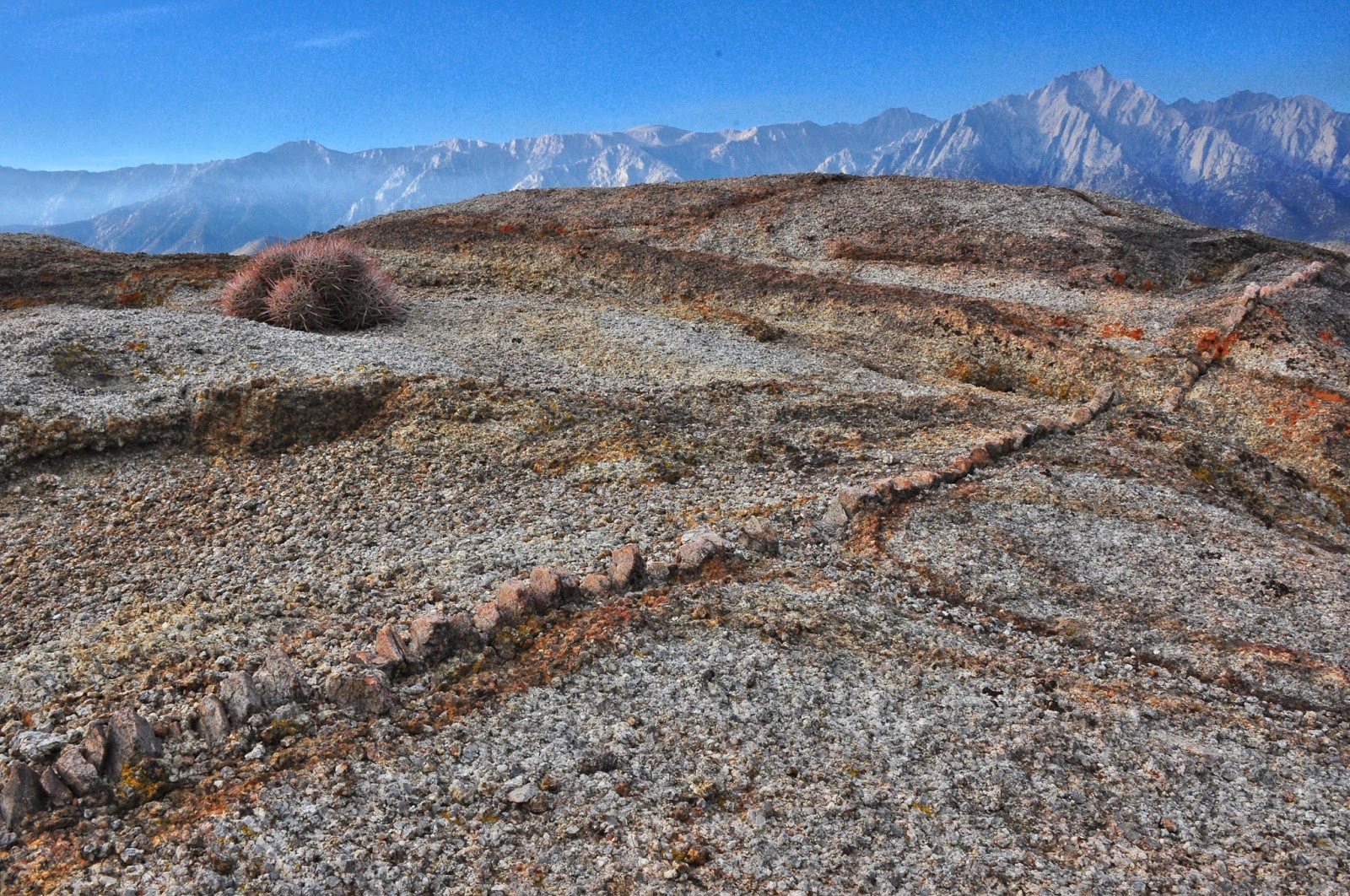 There was a lot of lichen to be found too.  That is a whole other science 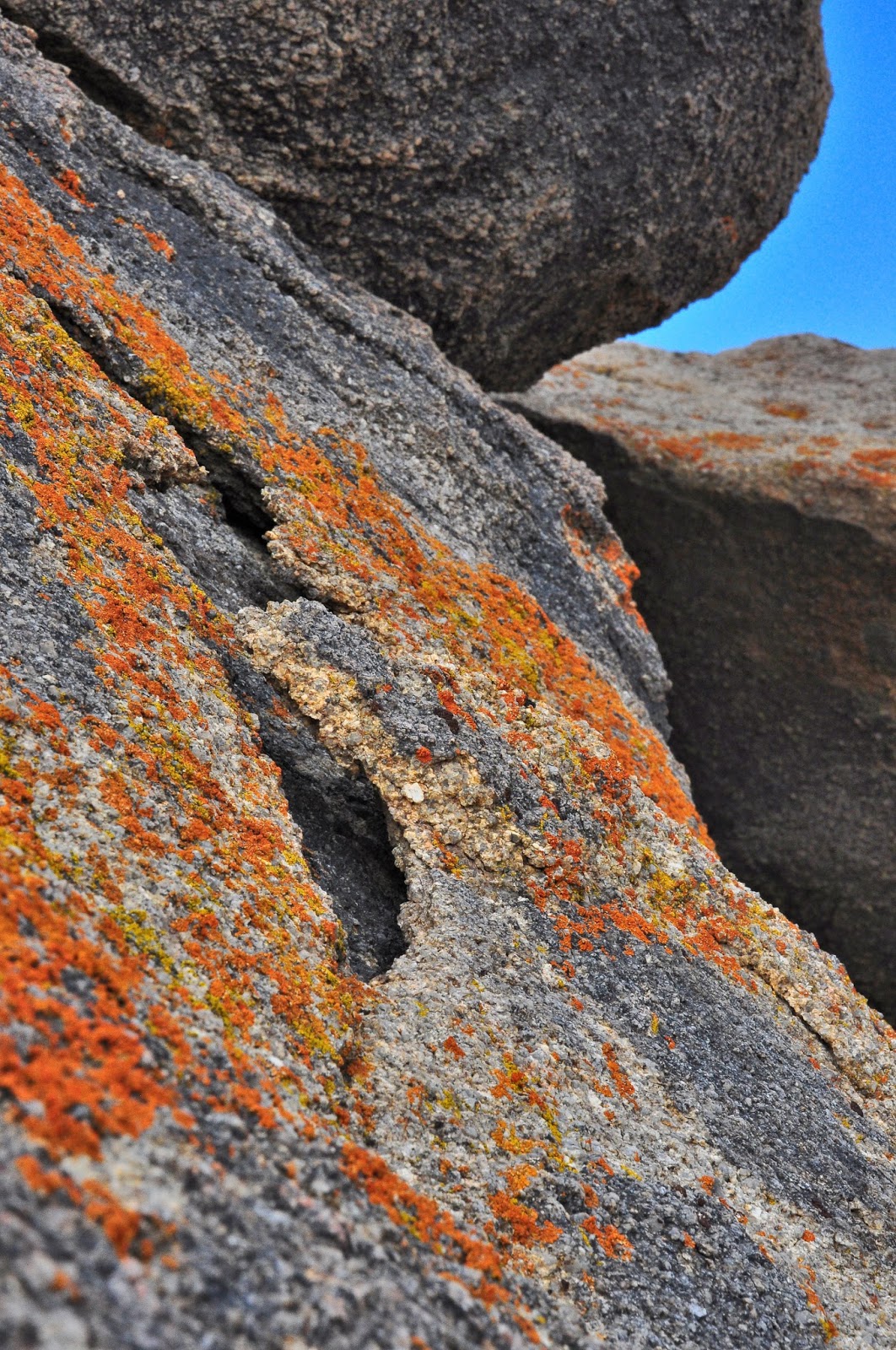 Nice pics of a barren land. Looks a bit like an other planet but has its own charm. Thanks for showing John.

Such interesting rock formations, one wonders indeed how this has developed this way. Glad you came down safely, ouch, aging is coming sometimes unexpectedly...

Those lines are glue lines from when God put the earth together.

I'll have to look this place up, the lichens would be enough to keep me out there for hours! Love the glue comment, someone has a good sense of humor.

Thanks for sharing the rock formations. I'm always fascinated with these unusual geological finds. There are many in New Mexico and Arizona along Rt 10.

I lichen all your pix, John (yuck yuck yuck yuck). They make me go oooohhh and start my heart aflitter :) Not that anyone asked, but there are a couple of reasons that ridge is running along for 1000s of feet. If the rocks were tilted up 90 degrees like you said, then this was most likely a layer of more resistant rock laid down between the others (like a layer cake turned on end). Another explanation is an "intrusion" ("dike" is the technical term if you want to look it up) of another, more resistant rock type during the formation of this outcropping. Lecture over....sorry. Honestly, those are some terrific formations you found and shared.

I think I'm seeing things on this formations... ;-)