I was walking the trail when I came upon this little cutie sunning itself in between the patches of shade from the trees overhead.  It was less than a foot long (30cm).  It was stretched out straight when I first came upon it and didn't move at bit.  I thought it was dead, having been run over by a mountain biker.  I touched it with my walking stick and it then curled its head back around under the oak leaf.  The leaf will give you an idea as to how small its head was.  I then proceeded to break one of my own rules when it comes to wildlife photography - take a bunch of photos right away before you move for a better position, or in this case, try to move the subject out from beneath the leaf.  He would have none of my pestering him and immediately slithered off the trail into the leaf litter leaving me with this one and only picture.  I didn't get his tail in the picture where you could see his tiny little rattle buttons, too small to be of any use.  Nervertheless, a bite from a baby rattlesnake can be more toxic than from an adult for the venom is highly concentrated.  Lesson here: Take lots of pictures folks before you go messing around.  Have something in the camera before the critter gets fed up and takes off. 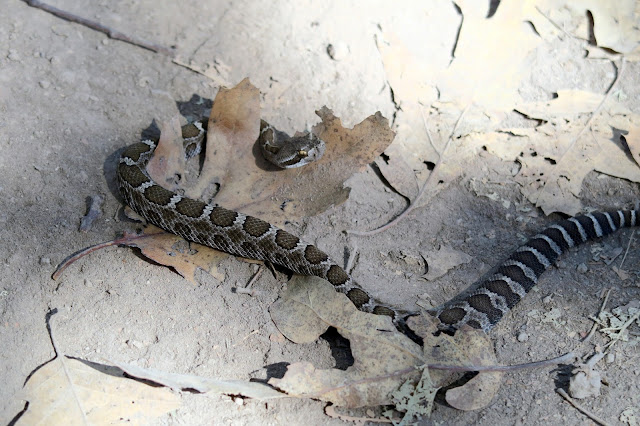