This really saddened me to learn about.  Evidently this happened right after Thanksgiving last year. 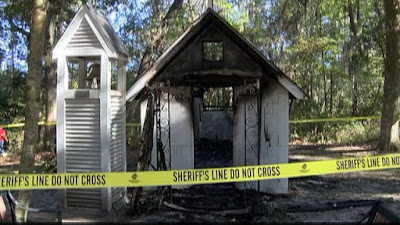 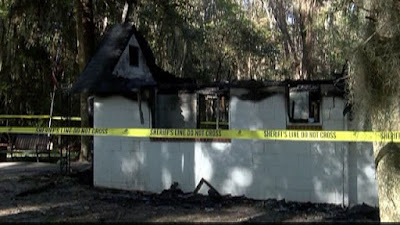 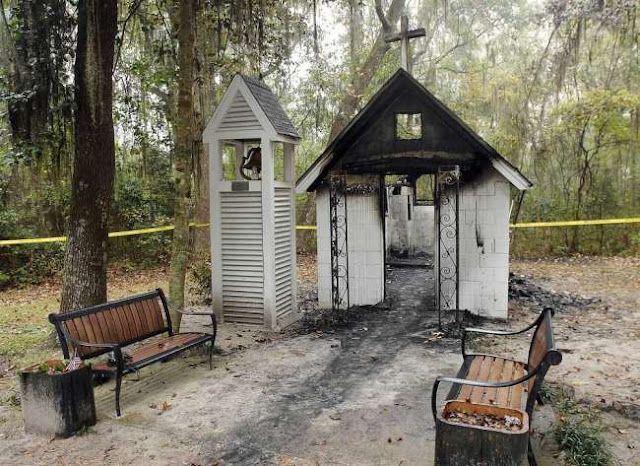 Here I have copied a local news report dated December 1, 2015.
Below that is a copy of my original post after visiting the little church in April of 2013.

DARIEN | Four days after a suspected arson destroyed the Smallest Church in America in northern McIntosh County, donations of building materials and cash are pouring in to rebuild the 190-square-foot structure, officials said.
The fire was reported just before 1 a.m. and firefighters found it burning throughout when they arrived, McIntosh County Fire Chief Mark Deverger said.
The fire was put out quickly, but because the structure is so small it was a total loss, he said.
Justin Lamb, an investigator with the McIntosh County Sheriff’s Office, said a state fire marshal concluded that the fire was not started by an electrical short and was most likely arson.
The church is kept up by donations that visitors dropped through a slot in a safe and, Sam Clark, a contractor and firefighter, pointed out a spot where it appeared someone had tried to use a torch to cut into the safe.
The fire marshal had reached the same conclusion, Lamb said.
“From what he could tell, someone had tried to force it open,’’ and the caretaker said the damage had not been there earlier, Lamb said.
Frank Williams and Clark were at the church early Tuesday taking measurements to calculate what would be needed to rebuild the little non-denominational tourist attraction on U.S. 17 just south of the Interstate 95 interchange at Southport.
“It’s going to be rebuilt soon,’’ Williams said. “Money’s coming. Lumber’s coming. It’ll be done by Christmas.”
A stack of donated 2-by-4’s lay on the edge of the property, and Clark said demolition wouldn’t be a problem. The fire was so hot it cracked the concrete block walls, he said, pulling a block down with one hand.
The small pews and pulpit burned, but the safe was still intact mounted on a wall.
The church is 19 feet deep long and 9 feet, 6 inches wide and was built in 1949 by grocer Agnes Harper, who stipulated it be deeded to Jesus Christ.
The sign says visitors are welcome and most of those who stop at the church are visitors.
County State Court Judge Jean Bolin stopped by Tuesday morning and said it had no services but that “thousand of people stop by here.”
The has been the site of some marriage proposals and many weddings.
Lamb said there was a wedding there about 6 p.m. Friday.
Investigators don’t believe those in the wedding party were local, but they’re trying to track them down to speak with them, Lamb said. 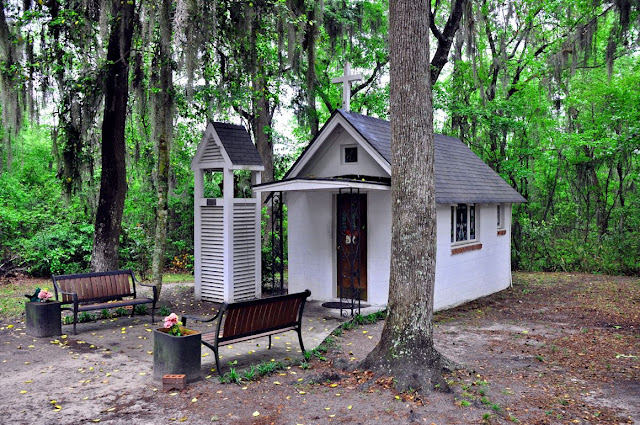 In 1949 Agnes Harper, a rural grocer, built this 10 x 15 foot building, the best she could do with limited funds knowing she could not afford the kind of chapel that would do justice to God.  She wrote the deed in the name of Jesus Christ.  Mrs. Harper died and Rev. G.W. Ward took care of the chapel, holding services plus the occasional wedding or baptism.  The reverend died in 1986 and since then various people have volunteered to be caretakers for it.  It remains today as a curiosity and a sanctuary for the traveler who seeks rest and escape in a cozy confinement.

Open the door, the light comes on. 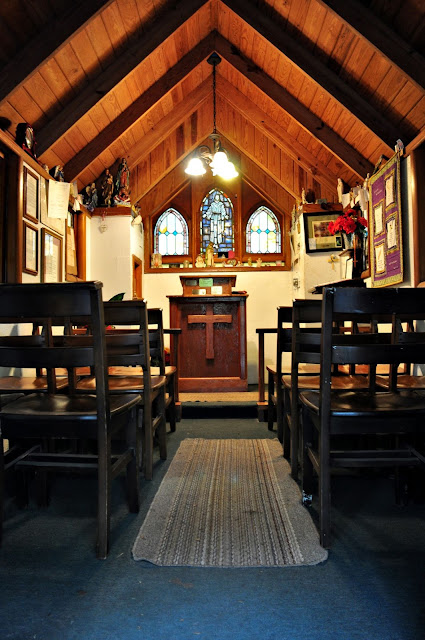 Standing at the pulpit one has a good view of all 12 parishioners. 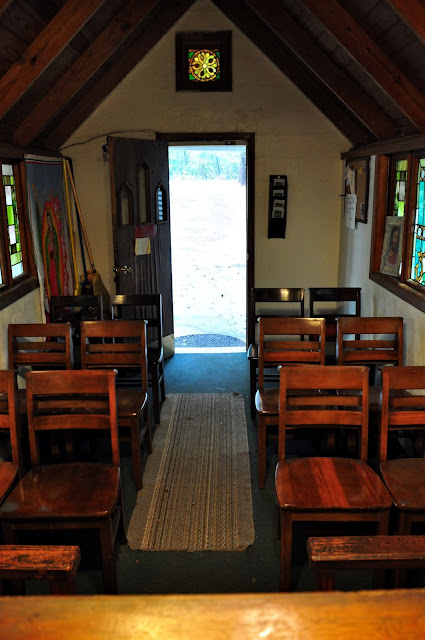 Looks seen inside much bigger then from outside. Pity.

Oh this is sad, what a stupid action. I hope the pretty building can be rebuilt.

Tgis is so sad, I remmber seeing a blog on this a while ago. Hope they find who did it

This is SO SAD! People can be so selfish, mean, and evil. This is a real tragedy in my book, but I am so happy the people who loved it so are going to rebuild. I love that the safe is still on the wall. The worst things after happening here in America and why? Can we not just love one another and get on with our lives respecting the people and things around us? Thank you for sharing the beautiful before and tragic after with us.

Such a tragedy but I am thankful people have stepped up to rebuild.
I never could understand what provokes people to do such damage.

very much a shame.

Such a shame...I don't know why people like to destroy stuff. I always wonder just what could be accomplished if people worked as hard to do good.

How sad this is destroyed. Hope they can rebuild it.

Why on earth would someone do something like this. People are awful.

Thats so sad and stupid. Hope that it's possible to rebuild.

Lace up and Walk said...

We visited this little church in 2014. It was such a sweet little place and to think that it had basically been taken care of by the community all those years. I was so sad when I read the report that it had been destroyed by thieves. We haven't been back but I understand that a group of volunteers have rebuilt the place. I'll have to check it out. Thanks for sharing.

I have little time for organised religion - but this is beyond belief. Some people have no idea.