I've had this map for a long time, nicely folded up and put away.  I had forgotten about it and came upon it while looking for something.  I spend a lot of my time looking for things but that's not what this is about.  I thought I ought to display the map so I could enjoy it more.  What is unique about this map is that it was printed in 1957.  It was only just the year before that President Dwight D. Eisenhower had authorized the Federal Aid Highway Act which set into motion the construction of our interstate highway system. 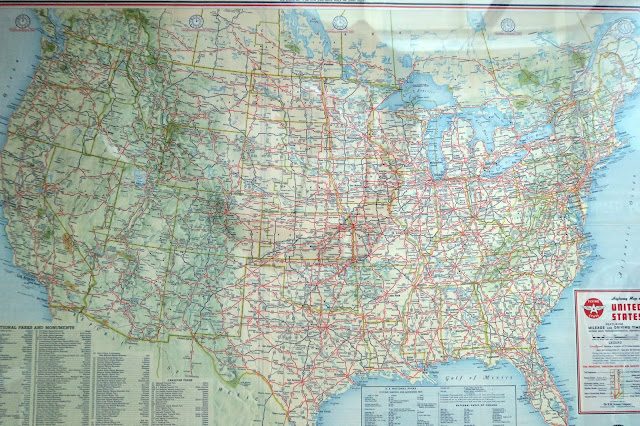 What this boils down to is that all of those red lines criss-crossing our country back then were for the most part just simple two-lane highways.  Maybe they widen out to four lane boulevards in major cities for a brief distance, but two lanes everywhere else.  Click on the maps to see them better. 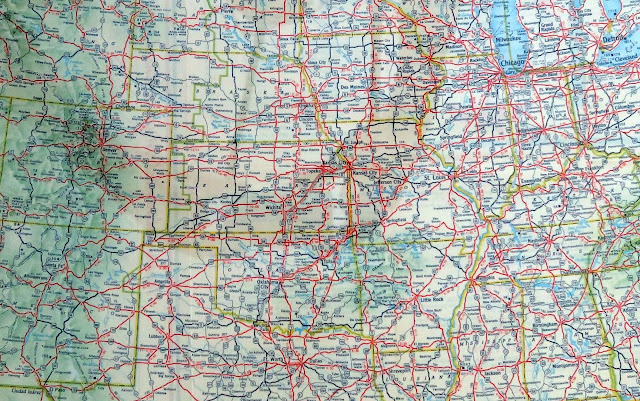 Here is the same section of our country today displaying all the major multi-lane highways of our interstate highway system.  Many of them were built upon existing two-lane highways from above.  Some bypassed towns on established two-lane roads and the town eventually ceased to exist.  A lot of service stations (where you got maps like mine for 25 cents), cafes and motels were put out of business with the interstate construction process.  Imagine the politics at play back then. 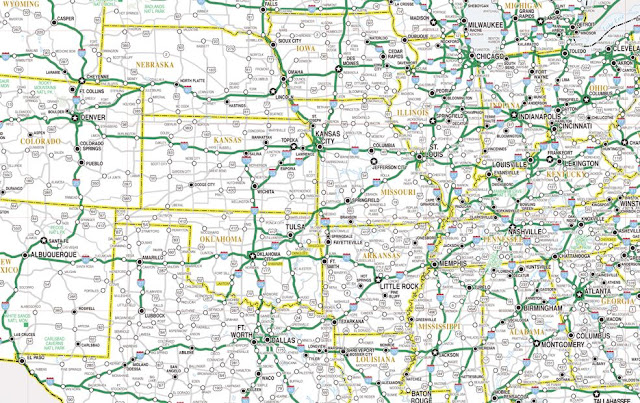 When Sinbad and I travel we stay off the interstates as much as possible.  You see so much more when not whizzing along at 70 miles per hour.  I'll drive the old highways that still exist and think back to how times were so much better back in 1957 when gas was under 50 cents a gallon and about the only thing we ever worried about was if the Russians would drop a nuclear ICBM missile on us.
Those were the good old days.

Your right a map like that should be displayed, memories fo a forgotten era

Yes, everything changes and building highways seems to be a high priority in many countries. Our small country is becoming a hugh highway. I showed you the placing of that bridge lately, they are making a spider web of highways around. I can only see the felled and shredded trees lying along all those roads under construction. No nature left here anymore.

Maps have really something magic. Even if they are not treasure maps they contain surprises.

I love a good map!

Great map. I'd certainly display it if it were mine.

So glad you kept that map! I'm not sure all those air=raid drills were so great, but I agree its much more fun using the byways and not so much the freeways (although Annabelle disagrees, but her vote doesn't count for much, lol).

Old maps like the are great - I have once from about 1910 of the place where I was born. No motorways, no WW 1 monuments, more woodland and less houses.

Dog, gone it....Only the old map in the middle came up on my computer. The other two shots were little tiny question marks. That is so darn irritating. I grew up on what I now call narrow gauge roads. Going and coming...that was it. Interstates were nonexistent. Love that old map. You need to frame it. genie