Recent pen and ink drawings were street scenes and this time I thought I'd do a citywide scene.
I do most drawings on paper around a 6 x 8.5 inch in size so this may give an idea to the detail confined in that space.  This drawing proved to take a lot longer to do than I had imagined it would when I started.  I also learned I cannot be drinking a cup of coffee while drawing at this scale either.  I recently bought a new set of pens just for one pen that has an smaller tip at .03mm than my other pen set that has a .05mm as its smallest.  It is like drawing with a blunt sewing needle.  I ended up using it for most of this drawing.  I refer to an image for most of my drawings and while working on the foreground I kept thinking about the skyscrapers in the background I had yet to do.  Somewhere along the way I got the idea to give the skyline buildings a futuristic look so that is why the title.  I scan my drawings for posting on the blog.  When the image is inserted into the posting they always come out not as nice as the scan.  Blogger messes with image in some way I cannot seem to overcome.

I think I'll take a break from drawing for a little while after this one. 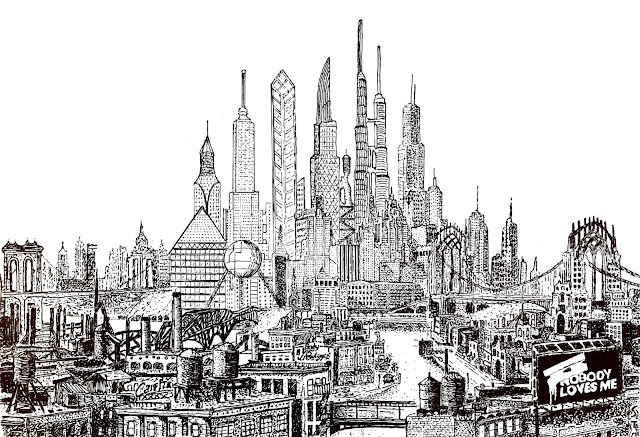 I found if you click on the image it looks better but still not like the original drawing.

What ever you say I think it looks really great, wish I had the patients to do that

I wondered where you'd been for the last few days! Time well spent.

I understand what you mean by blogger and drawing images. Nevertherless I think you did a great job with all those details. You must have a lot of patience.

really nice. the razor blade and hopeless message in the front...the skyscrapers then appear like blades and needles in the 'future' distance.

That's a tremendous amount of detail. Wow... I think you did a great job.

Yeh. I don't hope the black message and razorblade is on your mind a lot of times but sometimes you need a counterbalance to keep up the beauty of creating something yourself. Know that feeling. Great drawing.

You are so talented!

John....You have outdone yourself. This is awesome...I think it would be in a special art exhibit. You must be exhausted. Your poor wrist and your eyes. I am really impressed and will NOT to even begin to duplicate a city scene like this. You are an amazing with pen and ink. So talented. Oh, Bud finished his marathon today 1/2 hour faster than last year....and he ran that ultra last weekend. His b'day in Monday...64...one more year until Medicare. genie

I may be able to take a half decent shot now and then - but draw? No way. Nice image.