While looking at some satellite imagery of this area I could see what appears to be General Patton's encampment while training the troops for World War 2.  The grid pattern for the roads and tents left scars in the desert which can be seen from above.  I went to explore the area but found nothing of any interest except for this.  There were no signs as to what this was about and had nothing to do with what the area had been used for 70 plus years ago.  Someone put a lot of effort into this. 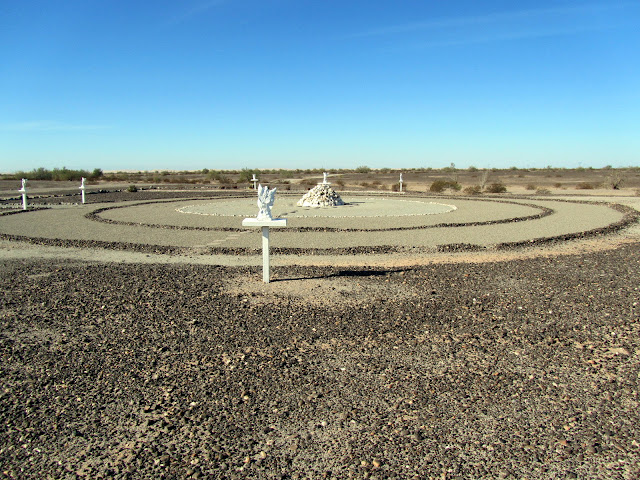 I never get bored out here.  There is always something to see or explore.  At this place in particular I can see Interstate 8 in the distance and I'll sit and watch the parade of cars and trucks go by.  They are far enough away that the road noise is barely perceptible. 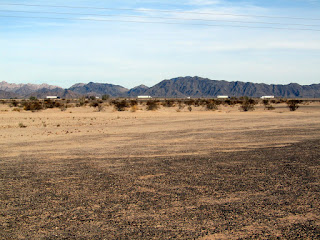 There is a good crop of flies here so swatting flies passes the time.  I can always read.  I have 35 books with me and have only read two so far so you can see I don't have a lot of time doing nothing.  I usually read before bedtime.  Also in the evening I'll work on whatever drawing I have going on and do a word puzzle in my Find a Word puzzle book.  And then there is people watching.

In this case here it is my crazy neighbor.  He is who I wrote was the only other one nearby when I arrived earlier this week and that was probably because he was broke down.  Everyday he is working on his van.  It starts up and sounds fine.  I've seen him drive it.  Now days later I am beginning to wonder if there is really anything wrong with it.  Maybe he only imagines there is.

He's a short guy with a big belly, a big bushy grey beard and an unruly mop of hair sticking out all over.  He walks like Popeye and occasionally has outbursts yelling at no one and waving his arms about.  Early on I thought he was just frustrated about whatever his car problem was but now days later it is much more than that.  This is probably why no one else is camped nearby.  This morning was exceptional.  He was really carrying on standing there yelling at the curtains inside the side door window waving his arms about.  Really out of control.  I think it is time for me to move on. 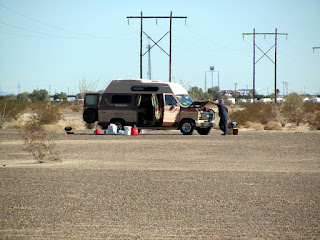