I am at a new area up the highway 30 miles further north from before.  Lots of new land to explore and I get to use my camera again as the connection is just that much better.

When I showed the Palo Verde tree I realized I didn't get that good of a photo to show the shade of green it is.  I think it is a pretty color and reminds me of split pea soup.  I like split pea soup.  I could go for a hot bowl of split pea soup right now.  The weather has taken a twenty degree drop in temperature in one day.  Overnight!  Yesterday the wind was blowing pretty good and everything inside has a fine coating of dust even though all the windows and the door was shut.  Today it is clear skies with 15 mph wind which creates a windchill factor.  I'd say what the temperature is but you would just laugh so I'll move on. 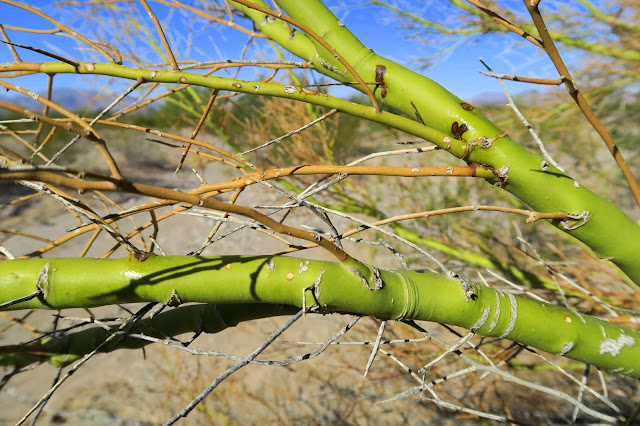 This saguaro looks like it has had a rough life.  I don't know what chews it up so.  There are birds that make holes for nests but this is not bird action.  Later I saw some young saguaro that were only 3 feet tall and they had the same destruction right at ground level.  This leads me to believe it is rabbits and ground critters doing this when the plant is young and tender.  As it grows taller the damage rises and the base becomes too tough and woody for chewing on.  That's my theory. 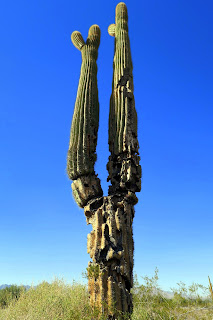 Then I found this.  I have not much of an idea what it was for.  It looks like a boiler or the water tank of a hot water heater.  Maybe is distiller?  I don't know. 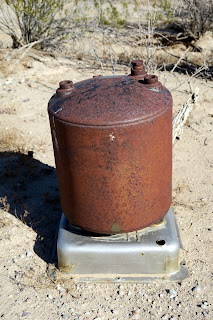 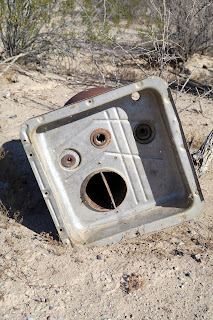 That's all for now.  I have some dusting to do.