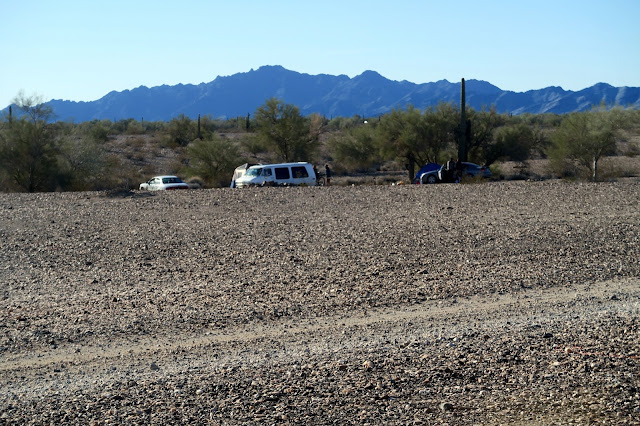 Who needs TV out here when you can people watch.  These are my neighbors and they provide hours of entertainment.  One guy in the white van is from New York.  One guy and his HUGE dog in the car to the right is from Wyoming.  On the side of the car in faded letters it reads Medical Taxi with a phone number to call.  Then the car to the left is a man and woman from I don't know where.  There are no license plates and the car looks like they drove it out from a junk yard.  Pieces and parts are hanging off of it everywhere with the rocker panel on the passenger side nearly dragging the ground.

They come and go constantly.  I think it is to buy some fast food to eat (I never see them cook), go to the bathroom (or maybe not) or to go get more cigarettes and booze.  Most everyone has a cigarette going especially Mr. Wyoming  who has one after another continually.  As with the cigarettes most always there is can of Budweiser in their hands.

Yesterday sitting around the campfire (that's all they do when not going into town) a big bottle of Smirnoff Vodka was uncorked.  One of those glass jugs with a handle.  What is that a gallon?  They nearly polished that off by the end of the day.  Mr. New York was staggering around so much I just knew he'd wind up falling into the fire.  He didn't.  But he did walk away, not far enough in my opinion, to puke.  He came back and washed it down with more vodka and passed the bottle around.

There are two tents up. Mr. New York sleeps in his van.  This morning after a cold wind blew all night they were up and about to start things off again.  Cigarettes were going, a couple Budweisers were opened and there was about two inches of Vodka left to go in the large glass jug.  It was empty before I had poured milk my Shredded Wheat.

I write this in not making fun of them.  I feel bad for them and their quality of life.  Yet they are enjoying themselves in their own way.  They talk, laugh and get along.  At one point the couple were on the phone and evidently the guy got some bad news.  I watched him walk away to by alone with his tears.  I felt bad for him but whatever it was the bottle of vodka was waiting for him when he returned to the fire.
Posted by John @ Beans and I on the Loose at 3:20 PM

Yes, that is a view in someones life that is not familiar to everyone. I am afraid there are a lot of people living like that. There is a big gap between educated people and non educated and mostly jobless ones. They drink there troubles away.

We watch people like that on the caravan site we go to, you get them every where.