The Ever Remarkable Miss Beans

Keep in mind we have only been together for 4 weeks last Sunday
and she's been traveling half that long.
You can see the Little House on the Highway at the far left of the dirt road and the jailhouse from yesterday's post is at the right.  She walked with me, on her leash, all that way albeit at cat speed through the brush but nevertheless, this was a remarkable achievement on her part for never having done anything like that before in her life. 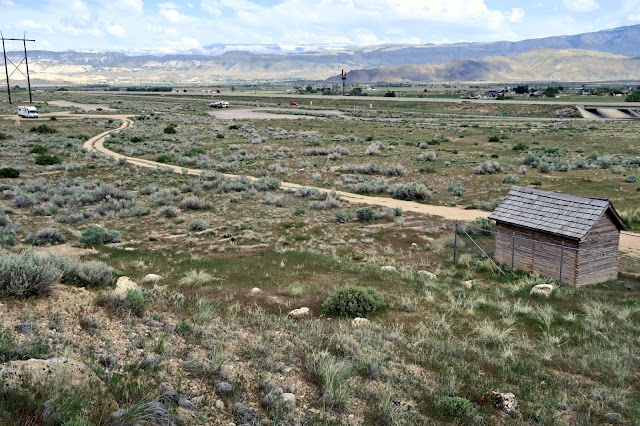 If that wasn't enough, she laid down there quietly by my feet while I read the history of the lime kiln.
She is by the right post. 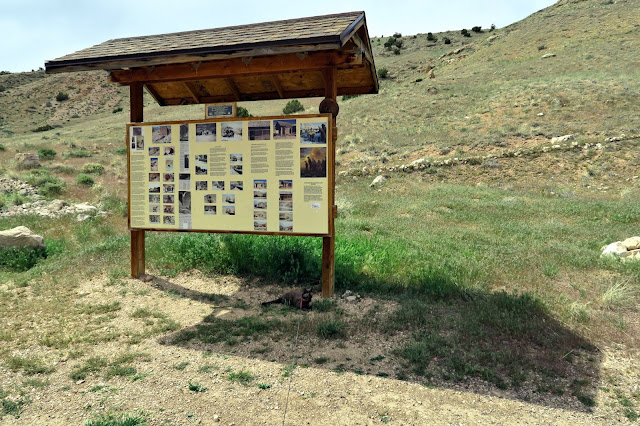 If she is doing this so early on at such a young age I cannot begin to imagine how it will be in the years to come.  Sometimes it is as if having a small dog loping along beside me. 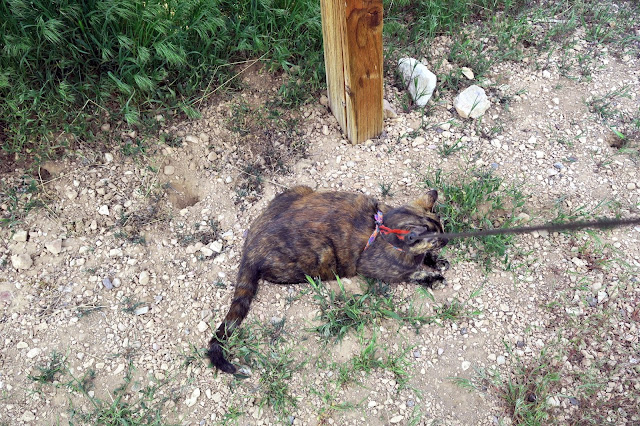 And there is still more.  One evening we had lightening and thunder which seemed directly above us.  The sound of the thunder seemed to shake the RV.  Beans never moved from where she was lying at the foot of the bed except to raise her head and look around.  I have never had a cat that was not scared to death of loud noises like thunder or the explosions of fireworks.  Beans continues to surprise and impress me each new day.

Beans Bulletin:  I had prepared the above post two days ago.  Since then we have moved to a new location.  When we arrived, I ate a sandwich then took Bean's harness and held it up to her in the overhead.  "You want to go for a walk?"  She jumped down to the floor by the door.  As I bent over to put the harness over her head she stood up on her hind feet, placed her two front paws inside the loop of the harness and pulled it down slipping her head through the loop, while still standing.  It was unbelievable.  I am really interested in seeing if this was just a fluke action on her part or purposeful.  I'll test her more on this in the future.  There also is an established trail nearby camp.  I plan to to take her on it and see how she performs.  I'll give a report later.

What a nice news John. Looks like you won the jackpot with Beans.

Beans acts indeed more like a dog, lucky you that you found the right cat that fits you. Where did she come from, a shelter?

She is turning out to be one remarkable cat.

Delightful to hear! [and see]

I'd say you got yourself an amazing cat! She is going to be a great pet and friend.

Beans is a reincarnated human who wanted to come back as cat. Lucky!