This is a continuation from my Eclipse post.
If you missed it you can see it here.

After the eclipse we three said our good-byes and went our separate ways, Texas, Oklahoma and me westward to Casper, Wyoming.  After several miles of dirt road I was on the two lane highway to the little town of Torrington, just inside the Wyoming/Nebraska border completely oblivious as to what had been going on in the country outside of our little Packer Lake retreat.  It was here I first saw all the traffic as it was backed up to get onto another two-lane highway south to Cheyenne, Wyoming and beyond into Colorado.  I was grateful I was heading west but thought of my poor friends Angela and Will maybe caught up in that mess.

Twenty four miles later the mess caught me and I quickly pulled in to a rest stop outside of the town of Guernsey to wait it out. 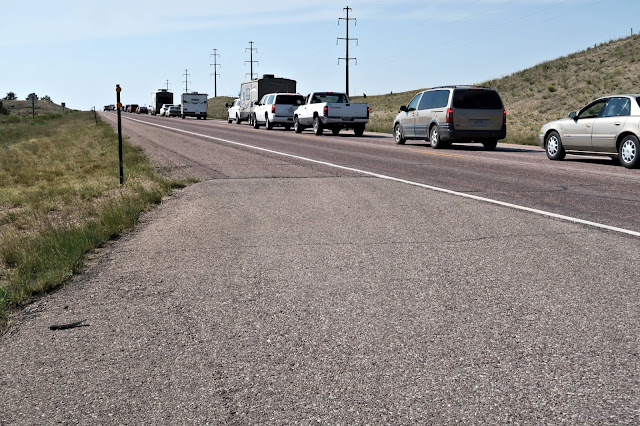 By now the Little House on the Highway is penned in and I couldn't get out even if I wanted to.
Beans of course wanted out to sniff car bumpers, wheels and lug nuts.
Sinbad was the same way and I've see other cats do likewise. 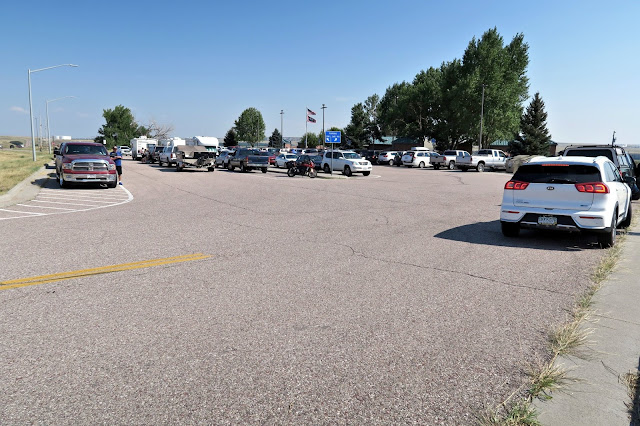 Silly to sit in a your car wasting gas going nowhere.
May as well sit in the shade on a nice green lawn.
Maybe have a picnic. 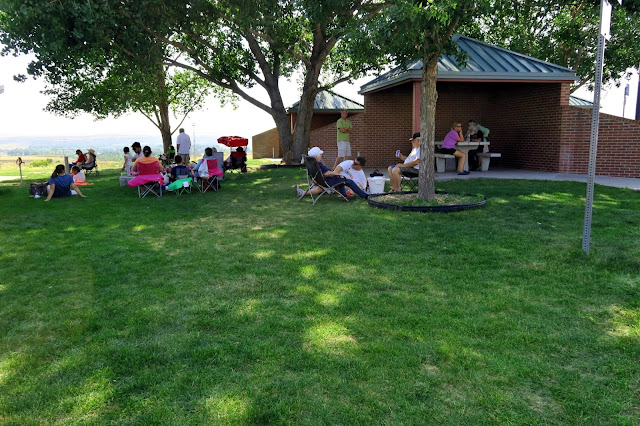 Or find a quiet spot with a nice view and get back to that great book you've been reading. 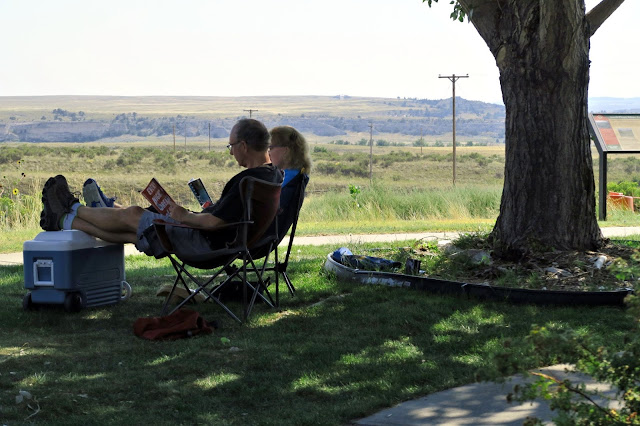 A few hours later we were back on the two lane highway where madness ensued.  Eastbound drivers were getting more and more frustrated passing cars in front of them coming my way in my lane! Why all the impatient frustration?  Well in 15 miles I learned why as I turned onto Interstate 25 heading north.  They had just escaped this! 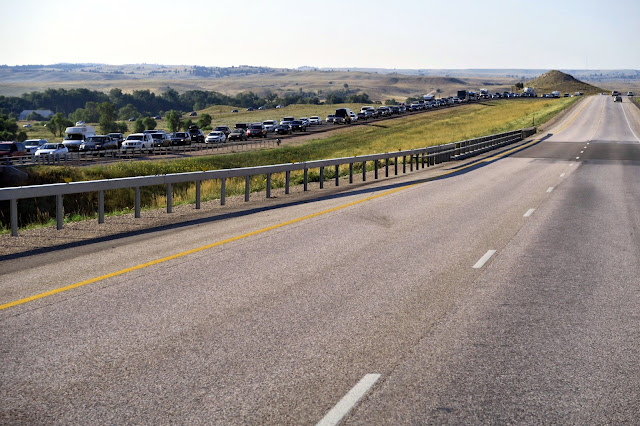 It was like this for miles and miles while my side was virtually empty.  Where were all these people coming from?  Then even a side frontage road where they thought they could do better was clogged also.   I saw people out walking faster than traffic was moving.  At one point I saw a tour bus off on the side of the highway, broke down.  All of the passengers were sanding outside in the broiling sun.  Roadside assistance or a replacement bus would not be able to get to them for many hours. 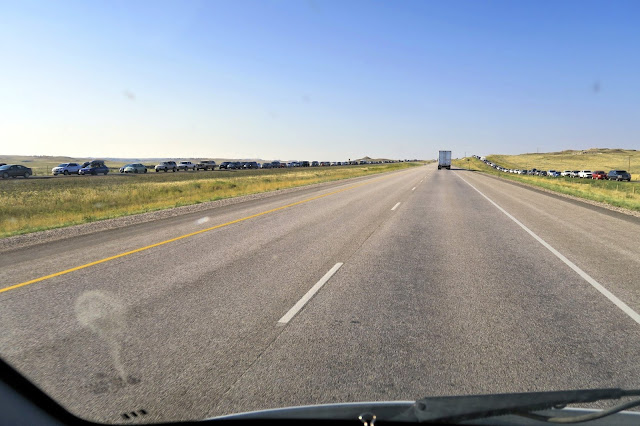 Over each hill I expected to see it thin out but no, it continued to be backed up for as far as I could see.  I was simply amazed at what I was seeing thinking I'll never see anything like this again, much like the eclipse itself.  It was as if a mass evacuation was in effect due to some pandemic event or imminent nuclear attack.
After awhile it became a bit unnerving as if we were speeding on into some Death Zone. 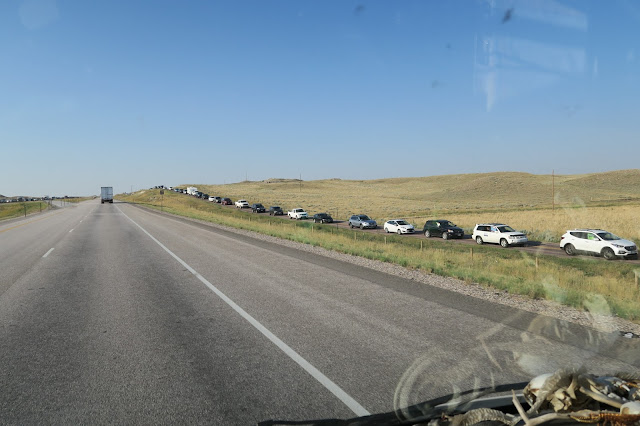 After 34 miles of observing this madness it began to thin out some and just before Douglas southbound traffic was somewhat normal and those poor souls had no idea what lay ahead of them. 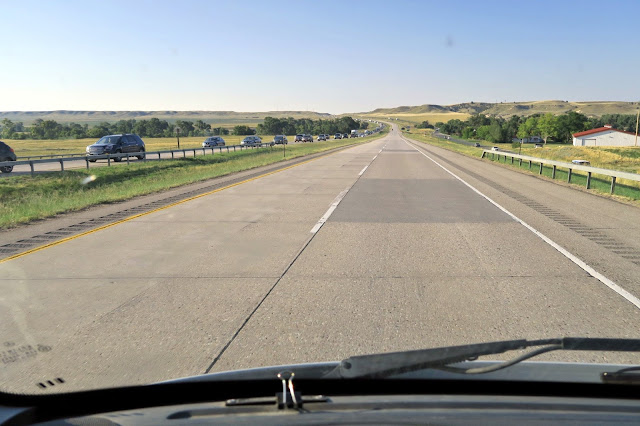 Every little town had big eclipse celebrations and people had signs out on their roped off property "Parking $20". Souvenir stands were still up, big bar-b-que cook-outs going with music, food and cold drinks for sale at premium prices no doubt.  I was talking with a guy in Casper and mentioned the hotel prices I had read about.  He said his friends rented out their home to some astronomical society for the weekend for...are you sitting down? $14,000.  True or not, after what I had seen in the past 24 hours I was willing to believe most anything.  Later I saw an article in the Casper newspaper that stated "Early estimates are that the population for the state had tripled for the eclipse viewing".
Now that I can believe without a doubt.

My new camp throughout the weekend will be at a lake some miles from Shoshone Wyoming from where I am posting this.  Cell service with any data speed is nearly non-existent here and I am having to use their public library wifi to post this.
So if you don't see anything from us for several days, that is why.

What a big move on the roads, you might think Trump had started his nuclear war with North Korea!

Well, what an amazing spectacle of all that backed up traffic on the highway. Thank your lucky stars that you were heading the other way. $14,000 for a weekend rental to eclipse watchers? WOW! the next total eclipse in N America will be here in 2024, I must get my rental conracts ready!!!!

You have the right idea about getting off the highway and waiting it out. Been in too many of those kinds of jams, but didn't have the luxury of waiting it out. Now that we're retired, its easier that way. We're in Charlotte, NC, and the traffic in and out of Columbia, SC, ran through our freeways here. It was quite a wait getting along the interstates afterwards I hear. We unfortunately couldn't make it down to SC and missed the totality (as well as all the traffic). I think the traffic jam would be well worth it, though.

Wow - I would be a bit intimidating to be heading towards whatever they were escaping! ;-)))

We went from MD to SC to a nice little small town near the middle of totality. Getting out was awful, not as bad as what you saw, but worth it.

I must get my rental conracts ready!!!!

We enjoyed your eclipse posts very much, John. Our viewing took place through a welding mask and a little box viewer that I made during breaks of picking our malbec grapes. We started on the 20th, picked mostly on the 21st, and finished on the 22nd. I will call it our Panoche Eclipse Wine next year when we bottle it, around 100 bottles.