This occurred two weeks ago while at Lake Cameahwait, Wyoming.

It would get windy at times but nothing we hadn't dealt with before.  Then there was a sudden gust of wind and it blew open the large overhead skylight in the forward part of the RV.  It was of such force that it obliterated the cover into dozens of pieces of Plexiglass.  This was not good at all mostly if by chance it rained.  What to do?

The cover was of two parts, an outer and inner.  The inner portion was the most salvageable and with a roll of duct tape I was able to piece it together enough to cover the opening and grey tape it in place. I felt this was good enough to prevent water to come in.  Two days later I discovered the duct tape was failing to hold after being exposed to the hot sun and only half of the cover was held in place. Fortunately I discovered this before it flew off on the highway somewhere.  I couldn't be replacing this tape every two days.  I went to Home Depot and found some tape similar to duct tape stating it was "All Weather Resistant."  I bought a roll, ripped off all the old and put the new stuff in place. Two weeks later as I write this, it looks as good as day one.  So nice to be able to buy a product that acutally does what it claims to do. 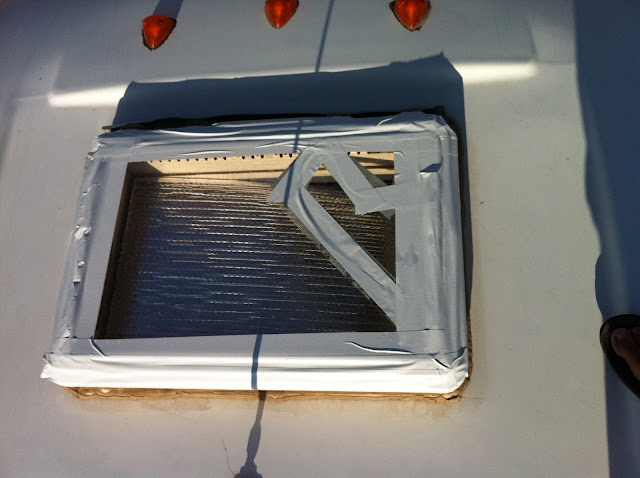 When "stuff happens" I always try to see some good in it and put it in a positive light.  I never liked this skylight.  It is of a poor design and was always being blown open in the slightest of winds even though it has a "catch" in each of it's two partially open positions.  One time I came back from grocery shopping and saw the thing standing straight up, wide open!  I panicked!  I thought Beans who liked to sleep up there would have gotten out.  She was still in her bed when I rushed into the RV.  Whew!  I made a note to never leave it partially open again while away.  Also the hot sun would pour in through the clear Plexiglas heating up the inside of the RV.  Above you can see the reflective panel I made to block out the sun.  The only good thing this skylight was good for was defrosting food and keeping fried chicken hot for a later meal. 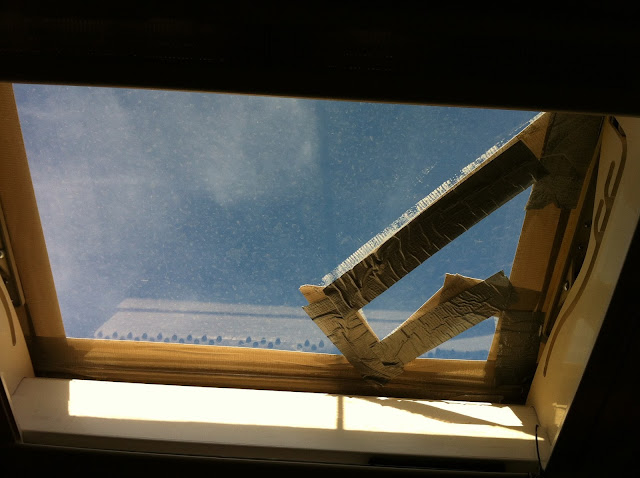 They want a couple hundred dollars for a replacement cover.  Phooey on that!  I plan to get a quarter inch thick darkly tinted piece of Plexiglas and screw it down flat onto the opening, sealed all around with sealant, have a inch or so overhang then add a lip of aluminum trim around the edges for water to drip off onto the roof.  No more hot sun, no more blowing open and sadly, no more food defroster.

Your riding house couses you a lot of work.

Always cheaper to do the repairs yourself, and probably do a better job too.

Good for you, pioneer!