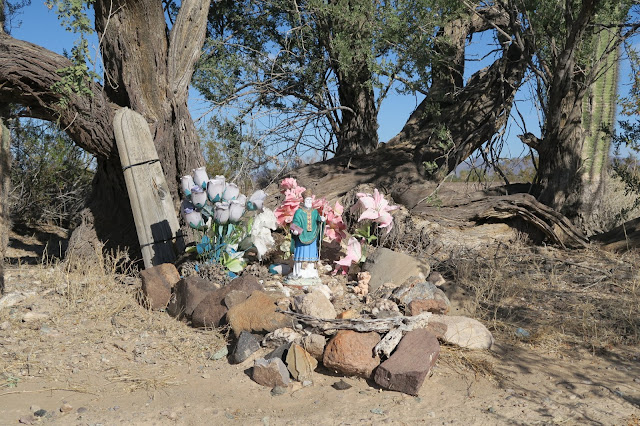 Just on the other side of the wash we are camped at is this grave site.  I am unable to make out all the writing on the weathered wood memorial that is being held together by zip-ties.  It reads "Rest in Peace" at the top with some type of poem or verse scratched in below followed by what may be a name and date.  Obviously it has been here a long time and no doubt it is the grave of someone's beloved pet who passed away while they were staying here.

This very well could have been Sinbad.  Plans were already made last year to come down to this area for the winter and I thought Sinbad and I would have one last road trip together but as you know he passed away in early October of 2016 before we left home.  That turned out to be a blessing as I would have been torn apart having to bury him in the desert somewhere.  Imagine those poor people starting their car one morning and having to drive away leaving their pet behind.  I venture to guess they never returned as the marker would be replaced with a better one wouldn't you think?