One day returning to home after a walk around the RTR camp I came across this big RV just parked in the middle of the road, engine running and no one around.  What little traffic there was had to drive around over the rough terrain.  What the heck?
I walked over to ask the folks sitting outside their trailer watching the show in their front yard. 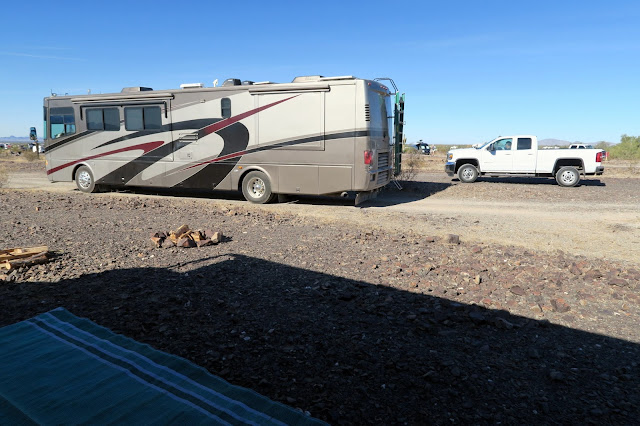 They said the people just left it there while walking ahead on foot to see if there was a camp site to their liking. They thought it was hilarious so I stayed too to see how this was going to turn out, plus I wanted to see what these inconsiderate people looked like.  During the time I got to know the couple (he in the white t-shirt and she sitting) who were from Florida.  They were a crack-up.  So fun. 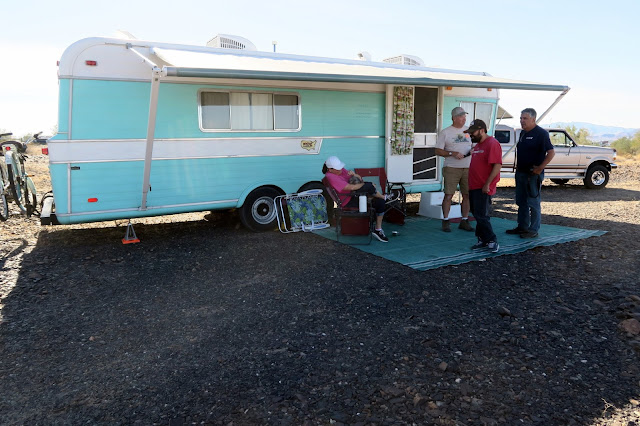 The trailer is a 1970 Holiday Rambler.  They paid $400 for it and almost ended up dragging it the 35 miles to their home as rubber was flying off the tires.  It made it.  They completely tore out the insides to bare sticks and through it all away. 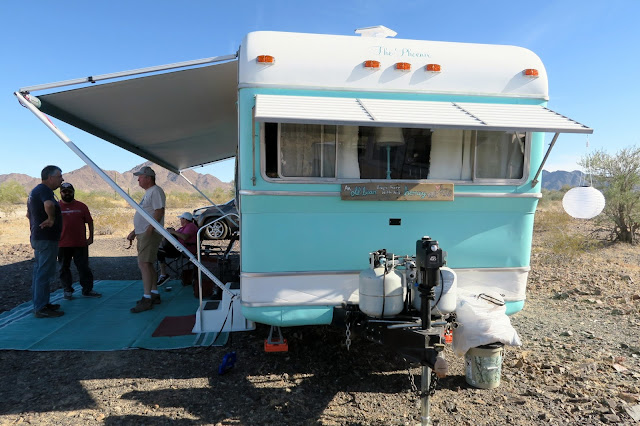 The outside was completely redone to look as it did when new 48 years ago. 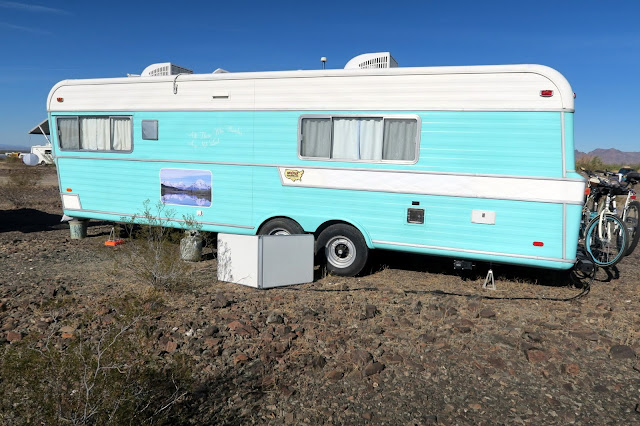 She being an interior design person guided the build inside like a tiny house rather than a trailer. 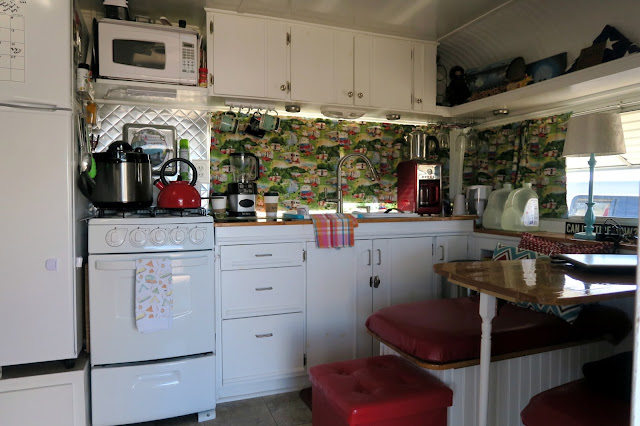 They did all the work themselves. 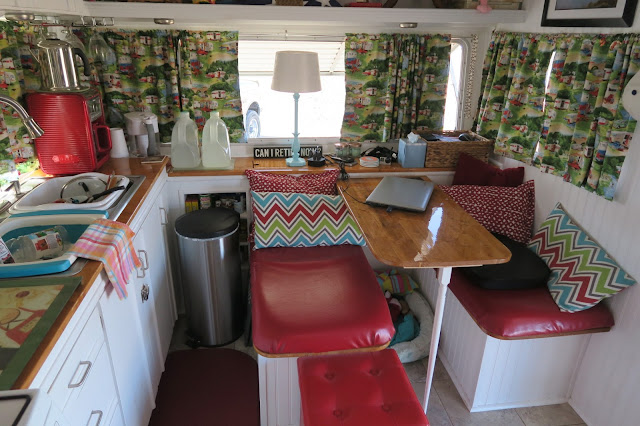 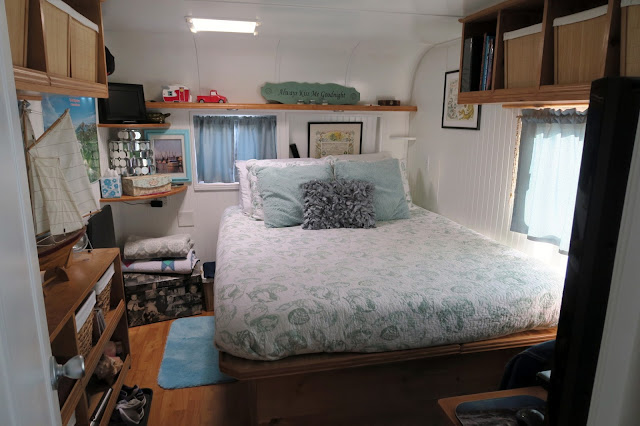 I think if the RV industry would build their products
along this line of thinking they would be great sellers. 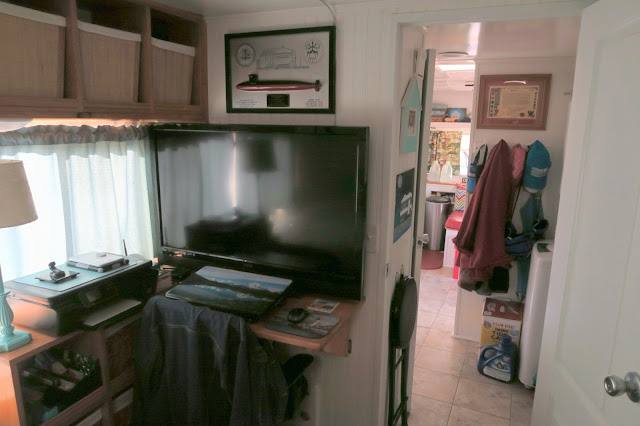 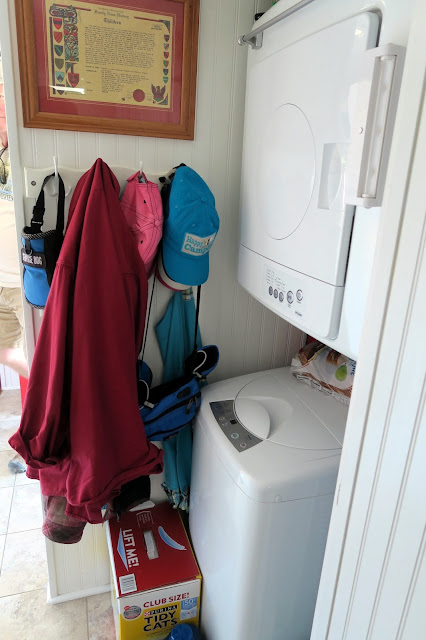 The people came back to their big $250,000 plus Class A coach and drove off like it was no big deal leaving it parked in the middle of the road.  If you can afford to own and drive a vehicle that gets 6 miles to the gallon then I guess you can feel entitled to park it anywhere you please.

A side note:  I've just discovered why sometimes the photos on these posts are blurry.  If I upload more than one photo at a time to the blog over weak cell connections they are blurry.  I am sorry for some of the past post's blurry photos.  It won't happen anymore.  From now on you will be able to enjoy my fabulous photographic images as they were originally captured.

Both the featured pantechnicons would have a lot of fun on the narrow, winding roads of England!

Now that is one awesome trailer. "She" has taste to burn when it comes to interior decorating.

That is wonderful design! They could make a mint designing campers. :)

oooh I like the Rambler, I could happily live in it, I would change the decor though.

They did a fabulous job!

That Holiday Rambler is really quite lovely inside. I wonder how much they spent on the reno. I'm appalled at the people leaving their huge bus blocking the road while they scouted out the campgrounds, that's really not very community minded is it?

Great post. I bought a little desert cabin that included a mid-70's Holiday Rambler just like this one (well, same basic size/shape). It's in bad condition, and hoping to fix it up one of these days!!

I agree with your comment about RV manufacturers. I often wonder who they consult on their designs--it sure doesn't seem to be women or the folks who actually live in them for any length of time! Love her designs on the old Rambler.

Love this trailer, what a fantastic job they did reinventing it and such great space saving touches. Playing catch up on blog reading, I've been away for almost a year due to working too hard. I'll keep my comments brief so as to not overwhelm your email!