In the early hours of March 9, 1916, in need of arms, ammunition, food and clothing for their revolutionary goals Pancho Villas's 485 troops crossed the U.S./Mexican border three miles south of the little town of Columbus.  The day before he had sent two officers to scout out the town and they reported back only 30 to 50 U.S. troops were present.  In reality their were 350. Oops!  I bet someone got demoted in rank (or shot) over that bad piece of intel. Needless to say, things didn't go so well.  After all the shooting was over ten citizens and eight U.S. soldiers had died.  Villa lost 75 men.

Notice in the photo they burned down the very place they wanted to ransack for supplies,
the mercantile or general store.  Not a very smart bunch of banditos it seems. 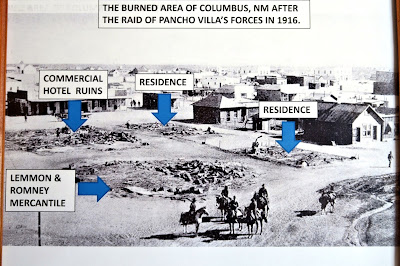 A stray bullet stopped this clock at the exact moment of the attack. 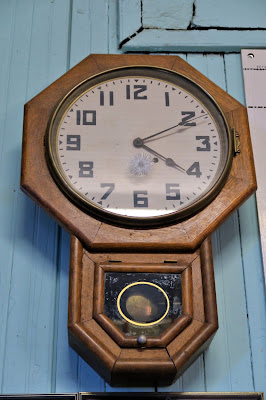 One of the few cars in town too, collected a few bullet holes. 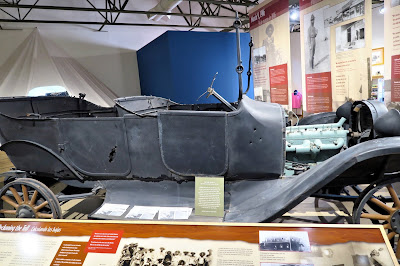 Ha! And I was complaining of having to camp too close to my neighbor. Part of the reason the raiders didn't fare to well. 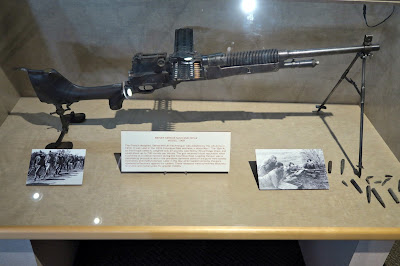 This was the first time a motorized armor plated truck was ever brought into use against an adversary.  This vehicle having yet to be named as a "tank" never saw any action. 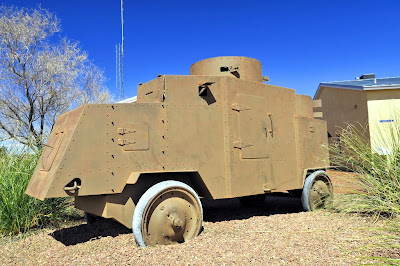 And too, this was the first time aircraft was used in a military action
and the construction of a military airfield nearby. 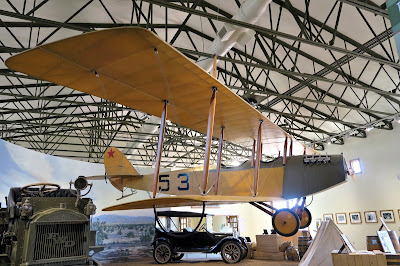 10,000 U.S. forces trailed Pancho Villa and his troops over 500 miles south into Mexico and never located them even though they did encounter a few skirmishes along the way with other revolutionary troops. Motorized trucks were used for the first time.  This allowed for hauling greater loads at a much faster pace but were prone to breakdowns and limitations as to where they could travel. 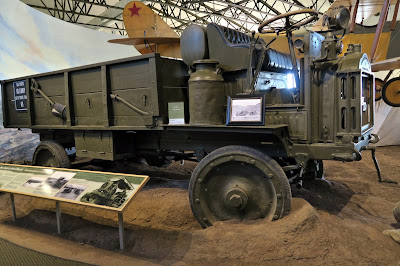 Sometimes mules and wagons still seemed to be the preferred method of moving men and supplies. 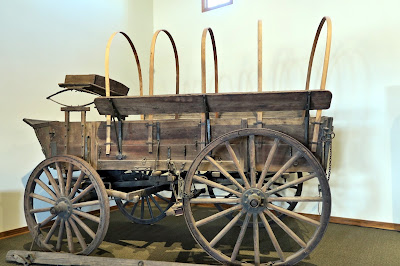 With the onset of the United States entering into WW1, President Wilson ordered Pershing and his troops back to the states.  The Mexican dictatorship was eventually overthrown and Villa retired to his hacienda in El Canutillo.  He was assassinated three years later and his assassins were never arrested. Pancho Villa's attack into New Mexico remains to be the only time a foreign country has invaded America.

You may have noticed the photos are smaller.  They will be that way from now on.  I am tired of presenting blurry photos for you on this blog.  As I am having to use a wifi hotspot to post on the blog that seems to be the issue.  The original photo is too much for the weak cell service connection.
I apologize.

Thank you for the terrific history lesson, I didn't know any of this, although the name Pancho Villa is familiar, I don't know anything about him or his revolutionary force.
I have an old clock similar to the one you show, but with no bullet hole, however mine doesn't work either!

Interesting story John. Your photos are good, crisp and clear.