It is two o'clock in the morning and I have to get up and do what most of us do at that hour of the night.  As normal, I can't get back to sleep so I get back up and sit at the table eating some grapes.  A car zooms into the parking lot, does a complete circle around then parks by the dumpsters.  Earlier in the day when Beans and I were walking around this dumpster had all of the appearances of one of the stores being cleaned out for some new tenants.  Full of big black trash bags and two rolls of carpeting and carpet padding.  A man and woman get out of the car, the guy climbs in the dumpster and starts rooting around with a flashlight in his mouth.  He tosses out a couple of the trash bags and the woman picks them up and tosses them into the other dumpster which is empty.  What is he looking for?  A marked bag full of drugs?  This was the drop-off point? Finally a roll of carpeting is ejected from the dumpster.  The woman picks it up, goes around to the back of the car, pops the trunk lid, folds the roll in half and stuffs it inside of the trunk!  Oh, they are after the carpeting.  Their trailer must need new carpet.  Hey hon, it's 2 am, lets go get that carpet. The guy is struggling to get the other roll of carpet and padding out but finally succeeds.  The woman hefts it around to the back, folds it in half and starts stuffing.  Ever try to fold in half a roll of carpet?  No easy task.  Then the rear door of the car pops open and out steps Mom.  I'm sure it was the woman's mother.  With a cigarette dangling from her mouth she helps with getting the second carpet inside the trunk.  It ain't going.  So the old lady climbs in on top of everything and starts jumping up and down on it then pushing her shoulder into it like a lineman on a football team!  Boy, don't mess with women from Kentucky!  The two women finally get it in far enough that they can close the trunk lid after a dozen slam attempts.  Just in time too because a cop rolls up.  Busted!  While he is taking notes and checking ID's back-up arrives.  Meanwhile Mom is in the back seat and none of the cops ever knew.  In fact they never even had them open the trunk!  After some talking the cops leave and the dumpsters divers start up the car with no left rear tail light or brake light working and drive off for home.
Tomorrow the trailer gets new (to it) carpeting. 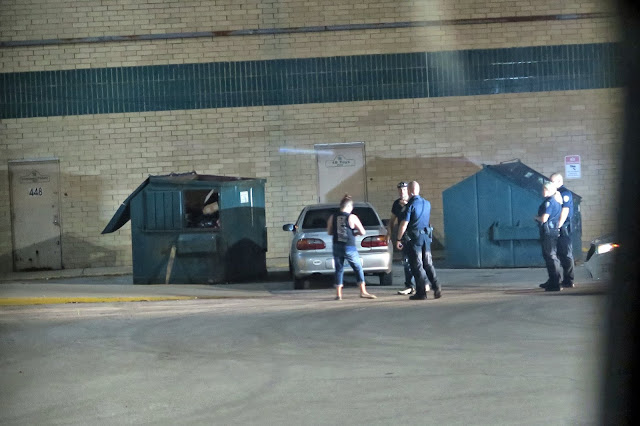 Oh boy, you do lead an interesting life! I hope the carpet matched the decor of their trailer!!!!

Should have taken a video and dropped it off with the police, might have made them think twice about most looking in the trunk