This was a Forest Service campground that at one time collected fees but for some reason it is now free.  I'm fine with that.  When we first arrived it felt wonderful.  Although the temperatures were in the 80's the humidity was 25% less; it was a noticeable difference from what we had been putting up with weeks prior.  Shade and only one other camper plus a cyclist, yeah, this will do fine.
Then the late afternoon arrived. 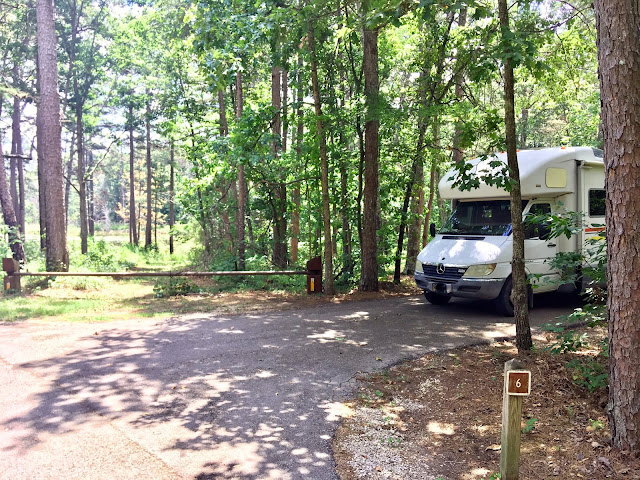 It got hot. The humidity level skyrocketed.  Ever been in a sauna?  Any breeze to be had was nonexistent.  The air was stagnant.  We were sweltering.  Beans was panting.  We had three fans going.  The forecast was more of the same but at increased levels.  There is no fun in this.
It finally broke us.  We waved the white flag and surrendered to Middle America.  It won.

A week earlier it dawned on me what was going wrong.  In the past every trip back east that Sinbad and I had done was in the spring and the fall.  We'd always return home for the summer when the vacationing families were turned loose.  The Midwest, Mideast, the South, is no place to be in the summer.  Every local I have talked with all confirmed with me that "you don't ever get used to it". They don't like it one bit.  That was nice to learn.  I thought I was a wimp.  I've learned a BIG lesson where NOT to go in the summers from now on.

We're heading for the Rocky Mountains.