You will recall my showing the huge white tent going up for the upcoming RV show and I said I would walk through and show what it was all about.  Well the grand opening was three days ago and the traffic out on the highway near camp was at a standstill, not that that was an issue for me for I could walk to the tent.  Still, people were driving in and parking anywhere they could find a space even if it meant in someone's camp!  We were spared that confrontation.  I had heard of the huge traffic jams and now I had seen them.  I decided to wait out the three day holiday weekend (Martin Luther King) and then walk up there to view the circus after the crowds had thinned out.  Jo said she changed her mind and wasn't going.  Fool that I am, I went for it on Tuesday.  This tent is huge, I'm told a "city block" long however long a city block is.  Well over a football field long at least.  There were three aisles packed with vendors on each side hawking their wares.  The so-called thinned out crowd I imagined was NOT!  People shuffled along at a zombie pace.  I lasted for all of a hundred feet and made a hasty exit out a side opening in the tent.  The mass of humanity was more than I could endure.  So I apologize for not even having the presence of mind to snap a quick overhead photo.  Once back outside I headed back for camp through the huge lot full of RVs for sale when I caught this scene.  Notice the sign on the door...someone is actually buying this monster! 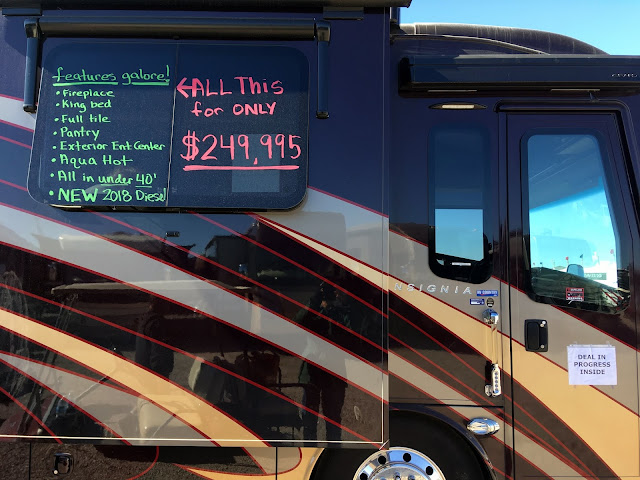 If you think that is a lot of money a few days ago I watch one of the YouTubers I follow and the young lady is in Tampa Florida touring the huge RV show going on there.  She walked through many of the RVs one of which a Prevost with the price tag of 2.3 million dollars.

We've had enough.  The crowded conditions, the ongoing cacophony of noise (traffic mostly) and the sheer numbers of people around we are moving out for the peace and quiet two and a half miles to the east of our present location.  I had to at least experience being in the thick of this once.  Never again!