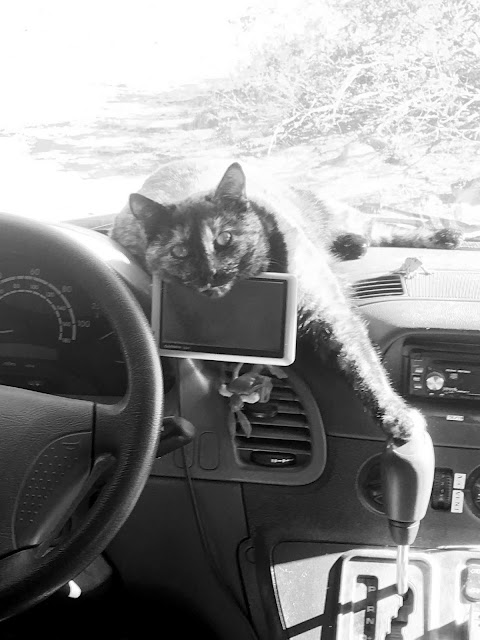 We had a couple nights this past week where the temperature fell to 28 degrees (-2.2C).  One of those nights was the first time Beans ever got under the covers with me.  Sinbad used to do that all the time.  I always worried about him smothering.  Usually Beans sleeps on top of my feet or legs.  I can't imagine how sleeping on my bony legs can be comfortable.  It isn't too much for me.  But she does put out some warmth.  I'll take that.  She's a big cat.  Bigger than Sinbad and probably weighs half again as much as did Sinbad.  I wish there was some way I could weigh her.  I thought of those scales in the grocery store in the fruit and vegetable section.  I don't think Beans would tolerate going into the grocery store.  The people probably would like it either.  "Don't mind me.  I'm just weighing my cat."

Ilike the way she finds balance with her head and her paw!

You could use a people scale. Just weigh yourself, then hold her, and subtract... I bet you have thought of that, but don't have a people scale either... ;-)

Ha ha, thinking of you in the grocery store... don't mind me....Can you believe this cat fruit is only 17 cents per pound??

I love your last line! I wish I had thought of that.

I had to giggle out loud when I looked at that picture!

She looks so chill!